HBO’s ‘Avenue 5’ entered the orbit with some really high expectations, thanks to its creator’s past success. Having presented one of the most rib-tickling comedies with the political satire, ‘Veep,’ Armando Iannucci seeks to derive humor from yet another unexpected source with this new space satire.

Boasting of an exceptionally talented cast and a wacky (to say the least) premise, the sitcom-in-space certainly displays tons of promise. It revolves around the titular spaceship: a touristic Milky Way-faring vehicle as it faces a serious malfunction, threatening to jeopardize the plans and (possibly) the lives of its passengers. A charismatic captain attempts to put the passengers at ease.

The show stars some well-known faces, led by Hugh Laurie of ‘House M.D.’ fame and supported by Josh Gad, Suzy Nakamura, Zach Woods, Rebecca Front and Lenora Crichlow. Most of the characters were introduced in the first episode and the series has already started to show signs of the kind of choking, caustic tension that kept Iannucci’s previous work, ‘Veep’ alive. Although the season premiere feels a little muddled and lacking in complete narrative control, it displays some explosive promise to come off as yet another unconventional comedy classic.

The first episode of ‘Avenue 5’ serves to be a largely introductory one. As the primary problem that the spaceship faces is highlighted, each character of the show is glossed over as if the camera were a bird flying from one person to the other rather than actively following a select few.

The episode starts with Hugh Laurie’s character, Captain Ryan Clark mesmerizingly taking a stroll of his spaceship, Avenue 5; interacting with passengers as if he has known them for years and being hailed as a heroic leader-in-charge of the ship’s affairs with a colorful past. He gets congratulated for his courage for having saved Avenue 3 from catastrophe in one of his previous stints constantly.

Assisting Captain Clark is Iris (played by Suzy Nakamura), a discontented assistant to the ship’s owner, Herman Judd (played fittingly by Josh Gad). Judd is hilariously shown to be resembling an eccentric billionaire with an overconfident urge to be entrepreneurial. Lenora Crichlow plays Billie, an engineer actually running the ship with assistance of her superior, Joe who is shown to be floating in space (in a spacesuit, of course) trying to fix something. 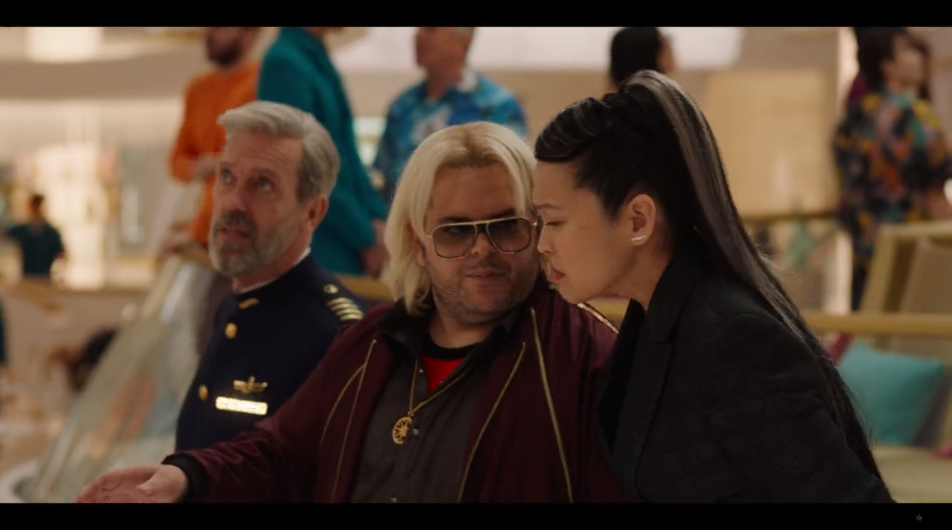 Meanwhile, in the ship’s control room on Earth, Rav (Nikki Amuka-Bird) is forced to accept a tour group as she tries to keep her calm while coordinating with Avenue 5 as its passengers make the world record of the biggest yoga class in space. There is a twenty-six second delay between the control room and Avenue 5 and that turns out to be the source of some comedic frustration and a symbolic display of our need for everything to be instantly available in the Internet age. However, Judd is definitely not taking the twenty-six second delay lying down. Apparently, Billy and Joe have already been commissioned to take care of it.

However, in the process, the ship’s gravity gets turned off for a split second sending the passengers hurtling towards the ship’s side in a ‘Titanic’ like moment with a laughter track instead of a sobbing one. The “gravity flip” causes Joe to be stabbed by his own screwdriver in the nothingness of space where he is trying to fix the delay.

Rav reveals to Clark, Iris, Billie and Judd that the impact of the passengers hitting the side of the ship due to the gravity flip has caused the ship to go off trajectory by a small angle, causing its journey to be extended to three years! At this time, the Captain has a rare slip-up moment and ends up blurting something in his native, British accent. Upon inquiry, he reveals to Iris, Billie and Judd that he is meant to just be a people’s person for calming the passengers and doesn’t actually know how to captain the ship. That duty was supposed to be taken care of by Joe.

What is the Malfunction?

Many viewers might be wondering the actual nature of the malfunction that is mentioned in the show’s blurb and depicted in the series premiere. It stems from a twenty-six second delay between the titular space-ship and the control room on Earth. The delay is a cause of great concern to the ship’s owner, Judd who commissions it to be fixed immediately.

In the process, the ship experiences a “gravity flip” that sends the passengers flying to one side of the ship. The impact of this collective blow alters the ship’s trajectory and increases its time of flight to three years. Basically, all the passengers and the ship’s crew are stuck on Avenue 5 for three years.

What causes the gravity flip is not revealed. Maybe, it was caused as a side-effect to the attempt of fixing the communication delay between the ship and the control room. Maybe, it could be routine but that begs the question of why a routine task could have such a monumental effect. Maybe, such changes in trajectories are common and fixable with a qualified EVA (extravehicular activity) astronaut on board. However, with Joe’s demise, Avenue 5 does not have that luxury.

However, one can also expect a larger, more shocking conspiracy as the raison d’etre for the gravity flip. The show is, after all, intended to provided commentary on themes like capitalism and our over-dependence on technology. Maybe, there is a more symbolic reason behind the gravity flip and not just random.

Who is Captain Ryan Clark? 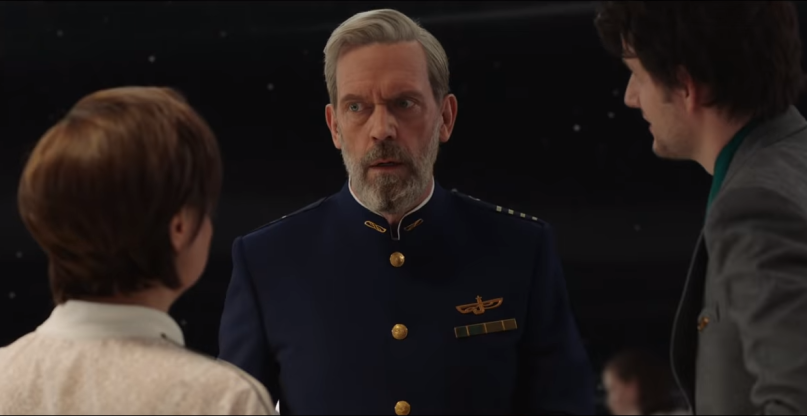 One of the biggest reveals of the season premiere was extremely Iannucci-esque. It turns out that Captain Ryan Clark is not actually a qualified captain as his charming personality would have people believe.

In fact, he is not even American like he portrays himself to be. In reality, he is a Britisher whose job is to please the passengers and keep them at ease. The actual captain of the ship is Joe- the EVA astronaut who died while fixing the delay.

Clark never really saved Avenue 3 like everybody gives him credit for. The fire which had threatened that ship had been extinguished automatically by the sprinkler systems and he had not done anything heroic to help the situation.

Well…thanks to the gravity flip and Captain Clark’s reveal, it turns out that the ship cannot be saved from the massive delay. There is nobody competent enough on-board to fix the ship’s trajectory and it looks like the passengers and the crew will be forced to bear each other for a matter of years instead of days.

The situation is quite, well…situational and a pretty wittily written way to establish the premise of seemingly incompatible characters being stuck in one place with each other for a long time.

Read More: Where Was Avenue 5 Filmed?