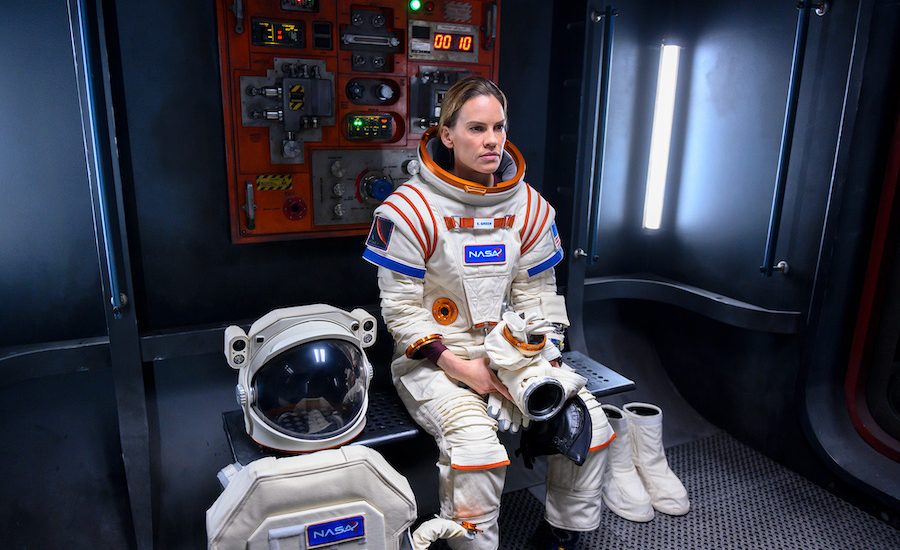 In most sci-fi shows that focus on space exploration, we see the stories that tend to lean more on the side of fantasy elements. The missions are generally aimed to go beyond the boundaries known by humans, we are introduced to strange worlds, with the chance of encountering an alien or two along the way. Netflix has successfully tapped the audience interested in these kinds of adventures with ‘Lost in Space’ and ‘Another Life’. We got a taste of comedy in the genre with Steve Carell’s ‘Space Force’, which focused more on the politics of the people in charge of space missions rather than the astronauts who have to embark on them. With ‘Away’, the streaming service offers a different take on the story, one that probably won’t focus on humans’ interaction with aliens, but will certainly be thrilling and full of adventure.

Emma Green is to lead the first manned mission to Mars. It is a joint mission that involves countries like Russia, China, UK, and India, with Misha, Lu, Kwesi, and Ram, respectively, representing them. Back home, Emma leaves behind her husband, Matt, and their teenage daughter, Lexi. It is also revealed that Matt is also a scientist, and he would have been the one to lead the mission had some health issue not showed up in his tests.

By the time we meet the astronauts, they have already reached the Moon, from where they will continue on their journey further. Also, in between this, they had an accident that could have turned fatal, and this puts a huge question mark on Emma’s leadership. This tension is further accentuated when we discover that two out of four in her team do not trust her, which does not sound so good when all of them need to stick together in a mission that doesn’t even guarantee whether they will make it to the finish line.

‘Away’ opens to the audience with a conflict. The storytellers focus first and foremost on the dynamics of the crew that is going to be together for the good part of one year, trapped in a tin can hurtling through space towards the Red Planet. It is the emotional, mental, and physical state of these people that will define the tension in the rest of the story, and the episode makes it a point to show us that there is a glaring divide between them. Beginning with this situation also allows it to quickly jump into the action without bothering to take some time to give the backstory to these characters. We get that through well-timed flashbacks, which give emotional weightage to the story at every turn.

The episode also shows us that crisis is going to be the perpetual state of the people aboard the Atlas. With every episode, we can expect one or the other form of malfunction or some unforeseen disaster or screw up waiting for the astronauts. Their personal relationships, with their families and with each other, are also to play a part in how their mission eventually turns out. In this manner, ‘Away’ turns out to be a family drama that uses the immense distance and an extremely high-pressure job for a person to underline the work-home equation for them, especially when they happen to be a woman. Hilary Swank’s Commander Emma Green finds herself tethered to her family that she has left behind on Earth, and has to shoulder the responsibility of taking care of her crew in the space while being there for her family on Earth. Things become all the more difficult for her when calamity strikes on both ends. What should she prioritize in this situation?

While it is too early to pass a verdict on it, the beginning of ‘Away’ proves that it holds a lot of promise. The incredible cast, a well-crafted balance between the science and the drama element, and some incredible views of space (even though CGI) are enough to keep you around for the next episode. The show also feels refreshing in the sense that it doesn’t jump too many centuries into the future. It feels more real because it focuses on something that we can more easily identify with, and in doing so, it also taps into the emotions that are easier to access with such a story. In addition to that, while it might not promise you some otherworldly galaxies or space frontiers where aliens begin to show up, it does offer you a probe into uncharted territories into a strange new world and the scary, demanding journey that needs to be conquered before reaching the destination. And even in that, there is a higher chance that they might never make it.