‘Baghdad Central’ presents an engaging mission person drama set in war-torn Iraq that gradually (but very engagingly) becomes more intense until reaching an explosive finale. The series is equal parts missing person thriller and war-crime drama. Don’t let its father-searches-for-daughter premise fool you into believing that it is anything like ‘Taken.’ ‘Baghdad Central’ is far more complex and nuanced than that.

The Channel 4 series has been acclaimed for depicting a story from the point of view of Iraqi locals instead of an American/British one. By doing so, the series also throws light on the experiences of the citizens of a nation ruptured by war and political instability and what it feels like to be a prisoner in one’s own country. Moreover, ‘Baghdad Central’ also manages to capture the cultural differences between Iraqi and Western societies deftly.

‘Baghdad Central’ begins with a former Iraqi police officer, Muhsin al-Khafaji’s elder daughter, Sawsan going missing. Sawsan used to work with the coalition forces as a translator with two of her friends, Sanaa and Zahra and the three had been recruited by an Iraqi professor named Zubeida Rashid.

Sanaa gets raped by a group of foreigners around the time Sawsan goes missing. Zahra and a friend kidnap an American citizen, Kibbert to find her rapists. However, unable to bear the shame, Sanaa shoots Kibbert and then, herself.

Al-Khafaji gets taken by the American forces looking for Kibbert to the Green Zone, where the coalition forces are stationed. After some torture, he is deemed innocent. Before al-Khafaji is released, a British man named Frank Temple recruits him to work for the coalition forces as he (Temple) has been assigned the task to rebuild the Iraqi police force. Temple offers to let Al-Khafaji’s younger daughter, Mrouj get free dialysis treatment at the Green Zone.  Temple has a rivalry with an American military officer named Parodi.

Zahra drives and crashes at the entrance of the Green Zone and is admitted inside when Al-Khafaji is going in. There is a dead Caucasian man in the car as well. Al-Khafaji finds the dead man merrily dressed with a condom in his front pocket and smelling of cologne. He concludes that he was going to have sex with someone. Soon, Parodi and Temple begin competing against each other for al-Khafaji’s time, services and support. Al-Khafaji, on the other hand, happily plays along the ping-pong game as it helps advance his search for his daughter.

Al-Khafaji’s investigation takes several twists before he concludes that Temple has been doing something shady. Eventually, he finds out that Temple was involved in sourcing local girls to coalition soldiers for sex in exchange for money. Towards the end, Sawsan infiltrates the Green Zone to kill Temple, but fails and ends up getting kidnapped by him.

Al-Khafaji manages to rescue Sawsan from Temple with a neat plan and flees to Jordan after arranging for Mrouj to escape from the Green Zone. Parodi spares him. However, he returns to Iraq to help rebuild his country.

Towards the end of the final of episode of ‘Baghdad Central,’ Al-Khafaji manages to escape being captured with Professor Zubeida and Sawsan in a car. His younger daughter, Mrouj has managed to exit the Green Zone and is with her uncle in Jordan. Al-Khafaji, Zubeida and Sawsan are driving to Jordan where they intend to start a new life.

However, Sawsan wants to stay in Iraq and fight for her country. She makes the car stop the car and gets out of it. She asks al-Khafaji why he didn’t try to save her brother (al-Khafaji’s son) from being executed years ago. Sawsan sits back in the car when al-Khafaji tells her that he had tried his best, nothing short of offering his own life.

However, just before the car crosses the border, American forces manage to catch up and make it stop. Al-Khafaji tells Parodi everything, including the fact that Temple had kidnapped Sawsan and that he (al-Khafaji) had stolen his money. Parodi tells al-Khafaji that Temple will most likely not be charged even if there are witnesses. Parodi lets him go and tells him that he (Parodi) does not belong in Iraq. He tells al-Khafaji that Iraq stands a chance to rebuild only if people like him stay. 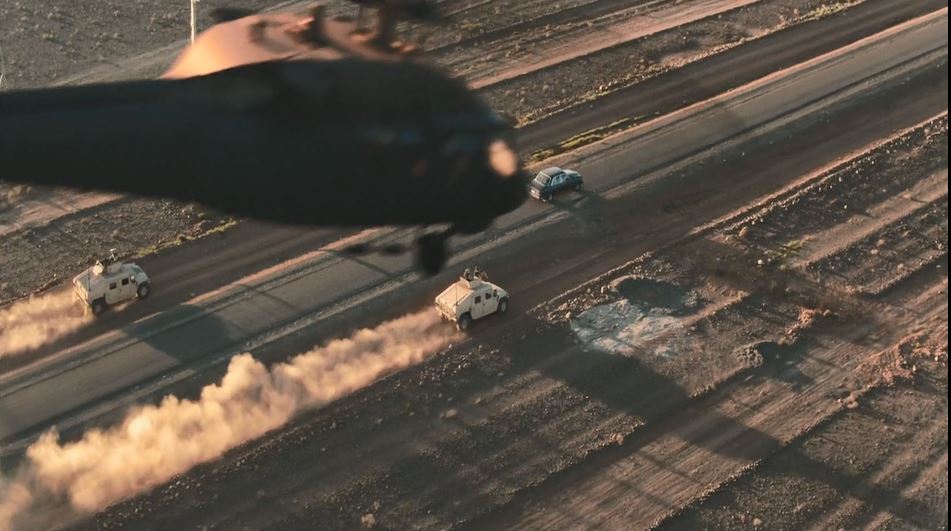 After the American forces leave, Sawsan tells al-Khafaji that she is ready to go to Jordan wholeheartedly. She tells him that leaving her country does not make her any less nationalistic. She tells him that she intends to make their stories heard and continue fighting for Iraq from outside the country.

Then, al-Khafaji remembers his entire family from years ago. Then, the scene cuts to al-Khafaji in the present, standing exactly where he did. However, his cab-driver friend is standing next to him, not Sawsan. Al-Khafaji tells his friend that he stayed to fight for his country in his own way. When asked whether he would be fighting for Iraq as a police officer, al-Khafaji pauses, smiles and sits in the car. The two drive away…

What Will Al-Khafaji do?

Well, sadly, the only people who can answer that question for you are the series’ writers themselves. According to early reports a second season for ‘Baghdad Central’ is “very much possible” and viewers might expect to see al-Khafaji as the protagonist. Well, firstly, let’s begin with what the open ending does depict with certainty.

We do know that Al-Khafaji does not go to Jordan with his family. This could actually turn out to be a good thing for him since he would be able to focus on rebuilding his country without having to worry about the safety of his family. Moreover, it also puts to rest a tired cliche: that of an antagonist threatening to cause harm to the hero’s family.

Now, Al-Khafaji may actually join the police force again since the Iraqi police will be revamped. However, he might also decide to pursue a line of work that allows him to make more impact. According to reports, the second season might revolve around the true incident of a large sum of money that had gone missing from American funds for Iraq.

This indicates that the story MIGHT begin with Temple’s money that Al-Khafaji had stolen. Temple loses the money in the stand-off at Zubeida’s place in the final episode and Parodi tells Al-Khafaji how it had not been found. Hence, we might expect the second season to use that as the starting point. This would also allow Al-Khafaji to seamlessly be a part of the next installment.