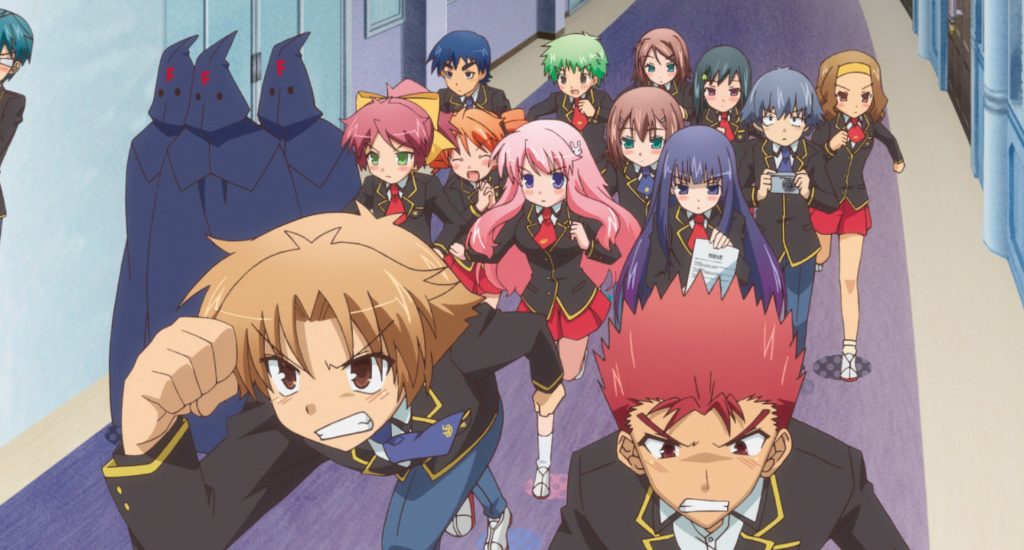 ‘Baka and Test’, also known as ‘Baka to Tesuto to Shōkanjū’ in Japan, literally translates to ‘Idiots, Tests, and Summoned Beasts’. Sometimes also referred to as ‘Baka and Test: Summon the Beasts’, ‘Baka and Test’ is a light novel series written by Kenji Inoue with illustrations done by famed manga artist Yui Haga. The novel was published by Enterbrain under their Famitsu Bunko Imprint from January 2007 to March 2015. A total of 18 novels were published during this time with 12 of them related to the main storyline and the remaining six added to the original as side stories. The light novel was also adapted into three separate manga adaptations, each one different from the other in some way.

The first one titled ‘Baka to Test to Shōkanjū’ was published by Kadokawa Shoten’s popular magazine ‘Shōnen Ace’ from April 2009 to June 2015. A total of 13 tankōbon volumes have been released till date with illustrations provided by Mosuke Mattaku and Yumeuta. An English version of this manga is presently available on BookWalker. The second adaptation titled ‘Baka to Test to Shōkanjū Ja’ was also published by Kadokawa Shoten in ‘Shōnen Ace’ but with illustrations provided by Koizumi. This ran from February 2010 to January 2014 for a total of four volumes. The last one illustrated by Namo and titled ‘Baka to Test to Shōkanjū Spinout! Sore ga Bokura no Nichijō’ was published online by Enterbrain in their web-magazine ‘Famitsu Comic Clear’ from May 27, 2010 to June 22, 2012. A total of six volumes were published for this series.

Baka and Test Season 3 Release Date: When will it premiere?

Baka and Test season 1 premiered on Jan 29, 2007. The massively popular anime adaptation of the light novel was produced by Silver Link and directed by Shin Ōnuma. The original script was written by Katsuhiko Takayama and a total of 13 episodes were developed and aired. A two-part OVA was also produced during this time, titled ‘Baka to Test to Shōkanjū: Matsuri’. It generated a lot of favorable reviews, with most critics pointing out the depth of the characters and their catchy one-liners.

Baka and Test season 2, titled ‘Baka to Test to Shōkanjū: Ni!’, premiered on July 8, 2011 and ended its run on September 30, 2011 in Japan. Both the anime seasons and the OVA are licensed by Funimation in North America and can be streamed on their official servers. A video game was also released and published in December 2012 for the PSP gaming console. There are nine playable characters and small tweaks have been made to the official summoning rules in order to keep the gameplay interesting and competitive. It is mostly well-received by fans of the franchise.

As far as the next season is concerned, no official announcements have been made. There are some rumors online that suggest otherwise. These are simply being fueled by the success of the anime and some fans, who cannot withhold their excitement. Personally, I really liked this anime a lot and would like it to continue for a third season. Our best guess is that in the unlikely scenario of the anime getting renewed, Baka and Test season 3 release date could be sometime in 2021. We will update this section as soon as we learn more.

The English dub of ‘Baka and Test’ is available on Amazon Prime and Funimation.

Baka and Test Plot and Characters

The plot of the anime mainly centers around the antics of the Fumizuki Academy, a prestigious fictional school in Japan where students are aggressively discriminated on the basis of their academic merits. The school is open about this fact and even encourages students to compete with one another in order to gain access to the best amenities provided by the school. They have provided a total of six sections and each one of them provides a certain level of comfort to the students.

Section A is the best of the lot, containing comfortable chairs, air conditioning and a free snacks bar for the students. However, Section F is a picture of misery with old worn out mats and low wooden tables for the students. Needless to say, the best students of the school are allocated to Section A while the worst ones in Section F with the mediocre ones being allocated in the middle sections. This is extremely unfair to students who are not able to perform in the school due to the fact that they are continuously being put down by the institution itself. The bad students do not have access to the laptops while the brilliant ones do and hence the gap between the sections increases.

However, there is a simple catch here — due to this imbalance, they have introduced a new system of combat that allows students to duel against each other in order to access the better classrooms. This provides the students at the bottom of the mix with an opportunity to rise up the ranks if they are not able to do so academically. This also takes away the unfair advantage the good students had and places the ball right in the middle ground, or one would think!

Duels take place not between students but between special characters that they summon, known as ‘Shōkanjū’ or ‘Avatars’. These creatures can be summoned at will but cannot interact with everyday objects and as a rule, a teacher always needs to oversee a duel. The students of Section A have access to the best of the avatars while students in Section F have the worst ones.

Adding to the imbalance is the fact that the summoned avatar’s health points will always be equal to the latest test score obtained by its user. Therefore, as the rule goes, students from Section A not only have access to the best of the summons but their unit’s health total is always greater than those of their opponents. This is also dependent on the teacher who is supervising the match, as the health total of the avatar is equal to the score obtained in the subject taught by that teacher. So if one student happens to be weak at Math, then their avatar’s health total will also be lower than that of other classes.

Once a duel has been confirmed between two students, they both proceed to summon their avatars which then fight against each other until one of their health points drops to zero. This can be done in a variety of ways but the most sure shot way of doing it is by hitting the opponent, which reduces their health point. The one who loses the duel needs to attend detention with the highly disliked remedial teacher, Soichi Nishimura. His sadistic tactics are well-known across the school and as a result, he has been nicknamed the ‘Iron Man’. However, if the student’s avatar manages to escape before reaching zero, then the student can take a quick test to refill these health points. If they succeed in the test, the avatar is allowed to continue the fight.

Later, we are introduced to the main protagonist of the anime — Akihisa Yoshii. He is a dimwitted student who is unable to score good marks in any of the tests. He is the rightful ‘baka’ in the anime and is consistently stuck in Section F. Since he has extremely low grades in all subjects, his name has become somewhat of a mockery among students. If they want to call someone or some act stupid, they simply call it ‘akihisaful’. He often ends up in detention and has to go through many chores in order to make up for his idiocy. He is also sometimes called the ‘Probationary Student’ due to the number of hours he spends with the ‘Iron Man’.

Akihisa’s avatar is the only avatar in the entire school that has the ability to interact with objects in order to help out with chores as a punishment. Due to this, he is able to help the teacher with various activities that would otherwise require a lot of strength. The avatars are extremely powerful and can get these tasks done in minutes. There is a downside to this fact though. Any damage that is taken by the avatar is felt by Akihisa as well. So if his avatar for some reason gets punched in the face, the searing pain will be felt by Akihisa too. This is the main reason why he is reluctant to take part in the duels in the first place. It results in a lot of pain for him and he finds it completely unnecessary.

But after having worked together for a long time, Akihisa and his avatar have developed a very special bond with each other that provides them an upper hand in every fight. In addition to their coordination, his avatar is also quite experienced and can perform some really special moves, allowing him to win matches that are otherwise considered unwinnable. However, his dueling skills don’t come handy when it comes to his love life. He is pursued by many girls and even boys in the school, but he remains oblivious to this due to his stupidity that sometimes leads to hilarious interactions between the characters.