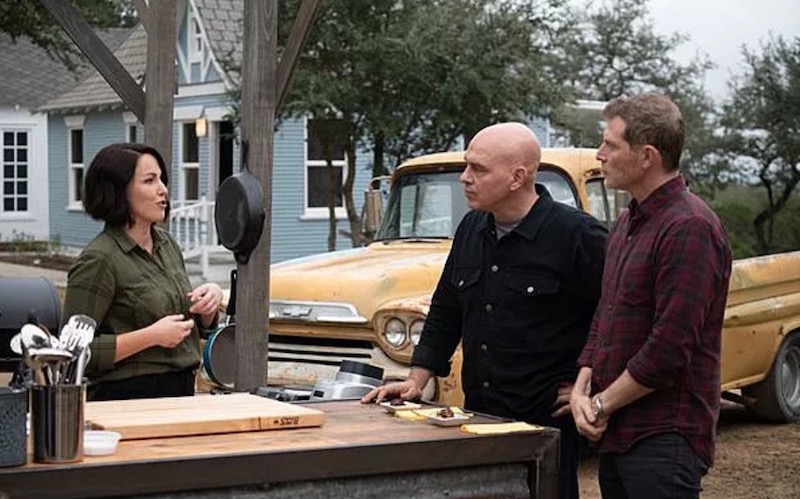 After ‘The Flay List‘, Bobby Flay partnered with Michael Symon for ‘BBQ Brawl: Flay vs Symon’. On this four-episode cooking show, the pair takes up the responsibility of mentoring eight of the most talented BBQ challengers from the country. The winner not only gets the opportunity to brag his skills but also claims the chance to star on a series.  Now, what is this show all about? Read on to know.

BBQ Brawl: Flay V. Symon Cast: Who is in it?

As evident from the name, this culinary competition is headlined by Bobby Flay and Michael Symon. Flay, a prominent chef and restaurateur, owns several restaurants and is an executive chef in multiple eateries. Some worthwhile mentions are Mesa Grill in Las Vegas and Nassau; Bar Americain in New York and at Mohegan Sun; Bobby Flay Steak in Atlantic City; Gato in New York, and Bobby’s Burger Palace across 19 locales in 11 states. He is also a regular appearance on many shows on Food Network.

Accompanying Flay is Michael Symon, another renowned restaurateur, TV personality, and author. He has been spotted on numerous Food Network series, such as ‘Iron Chef America‘, ‘Burgers’, ‘Brew and ‘Que’, ‘Food Feuds’, and ‘The Best Thing I Ever Ate’. He has also appeared on ‘Cook Like an Iron Chef’ on the Cooking Channel and ‘The Chew’ on ABC. Alongside Flay and Symon, there is a trio of judges, the grilling connoisseurs named Moe Cason, Chris Lilly, and Amy Mills.

BBQ Brawl: Flay V. Symon Plot: What is it about?

Bobby Flay, “the undisputed grill master” at Food Network and Michael Symon, “the reigning king of all things meat”, come together in a head-to-head battle to decide who between the duo is the best. On ‘BBQ Brawl’, the pair rounds up eight of the best pitmasters, grillers, and barbecue experts from across the US and pits them against each other in a friendly yet fierce showdown. While the final result of the contest determines who would get bragging rights, it also offers a grand prize.

The first challenge on every episode comprises a face-off between Bobby and Michael. This is called the cook-off round. The one who wins gets an advantage for his crew on the second round. The duo mentors and guides their team members, accompanied by a bit of hands-on demonstration. With their coaching, the candidates participate in multiple themed challenges. One contestant from each team is evicted every week. By the end of the four episodes, one winner is named the Master of ‘Cue and he/she makes his/her mentor proud.

The show begins with Bobby and Michael choosing their team members. However, before that, they participate in a faceoff at a backyard barbecue challenge. The winner earns the chance to make the first pick. The next round follows the eight contenders as they create the best backyard barbecue dishes and present them to the panel of expert judges. The poorest two performers go back home.

In season 1, we see Flay and Symon battling to secure the first position in a tomahawk rib-eye challenge with ‘high steaks’. Of course, the better performer secures an advantage in the remaining competition. Following this, the six contestants are thrown a Texas beef challenge. An unexpected curveball makes matters more complicated. Again, the duo attempt to beat one another in a regional barbecue challenge. The remaining four pitmasters are allotted the task of making a dish that is unique to a certain locale in the country. A challenging twist in between keeps them on their toes. Ultimately, with only two finalists remaining, Flay and Symon work as sous chefs in a spectacular barbecue showdown. Toward the end, one talented BBQ master lays claim to his/her own digital series and also earns the title of ‘Master of ‘Cue’.

Season 2, if commissioned, is expected to follow a similar format as the first, though don’t be surprised if there are different set of challenges thrown at the contestants.

‘BBQ Brawl: Flay V. Symon’ season 1 premiered on Food Network on August 1, 2019. Its entire run comprised of just four episodes. Dubbed as the ultimate BFF BBQ Brawl, the show definitely caught attention of barbecue fans. However, as far as another season is concerned, we don’t have an announcement yet. If the show gets renewed, you can expect ‘BBQ Brawl: Flay V. Symon’ season 2 to release sometime in August, 2020. We will revisit this section as and when we learn more.

No official trailer for the show has been released by Food Network. However, if you wish to check out funny behind-the-scenes videos of Flay and Symon as they indulge in hilarious barbecue guessing games, take a BFF quiz, and participate in a series of blindfolded taste tests, you can always visit their official website.