Who is Bear on ‘The Masked Singer’? Clues and Guesses 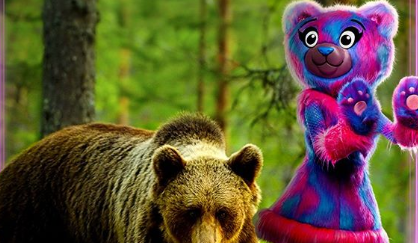 ‘The Masked Singer‘ Season 3 has been off to a solid start. While Group A amazed us with incredible energy and stellar performances, Group B seemed to raise the bar even higher. Naturally, with Group C about to take the stage, you might be wondering about who the performers are, and what they have in store.

We have got you covered in that regard. Here, we focus on the Bear. Despite an incredibly bright appearance, not much is known about the Bear, by way of clues. However, that has never deterred us, and we have come through once again with all available clues and guesses about the character.

Not many clues have been made evident when it comes to Bear. However, we do know that a woman is behind the costume. While we don’t know her story, or job, until the first clue package arrives, we can make some observations on Bear’s outfit.

It appears that Bear has an old school tie-dye outfit on, which is extremely colorful. You can check out the post below.

We're bear-y excited for #BearMask to take the #TheMaskedSinger stage! 🐻

While Bear’s outfit might not give out much, a teaser shows her performing ‘Baby Got Back’ by Sir Mix-a-Lot. The voice has led several fans to comment that Tiffany Haddish might be behind the mask. After all, Haddish’s raspy voice would match what we hear from the Bear. Moreover, Nick Cannon announced that amongst the performers there are three New York Times bestsellers.

In this light, it is important to note that Tiffany’s ‘The Last Black Unicorn’ enjoys this distinction. You can check out a fan’s tweet below, where the doubts that Lady Gaga or Nicki Minaj could be Bear, are dispelled.

Yall are so fucking deaf thinking the Bear is Nicki Minaj or Lady Gaga. Nicki doesnt even rap like that and that sounds nothing like Lady Gaga. The Bear is Tiffany Haddish.. if anything, Nicki Minaj is the Night Angel.

Understandably, hearing Bear rap, some fans might have felt that it is Nicki Minaj, who is a popular rapper. However, the chances of it being Haddish are higher. One fan has even gone on to comment that Bear might be Taraji P. Henson. While there is not much to go on, to reach this deduction, Henson does have a sense of humor and might have decided to appear on the show. Check out the fan’s tweet below.

Since the clues have not been given out yet, there are bound to be some wild guesses. One that has surprisingly gained quite a bit of traction is that Bear might be JoJo Siwa. Several netizens have guessed it is the YouTuber. While her voice does not really seem similar to Bear’s one can never be too sure.

After all, we only hear a snippet of Bear’s performance. Moreover, Siwa also has a New York Times bestseller, which makes this a plausible guess, for now. Check out the fan’s tweet below, about the same.

One of the earliest guesses, when it comes to Bear, has been that Melanie Martinez could be behind the mask. One fan actually pointed on Instagram, that when Bear was introduced, the character was labeled as ‘Teddy Bear’. This happens to be one of Martinez’s songs.

Moreover, the childlike aesthetic of the stuffed teddy bear really goes with how Martinez has portrayed herself. However, that being said, several Twitter netizens have pointed out that it would be lovely to have Martinez on the show, but it seems unlikely.

Understandably, at this moment, there are some guesses that have been made, but none that are solidly substantiated. This will only be possible once more clues are made available, and we get to hear Bear perform a bit more, in the upcoming episodes. In the meanwhile, stay tuned for the latest updates about ‘The Masked Singer’.