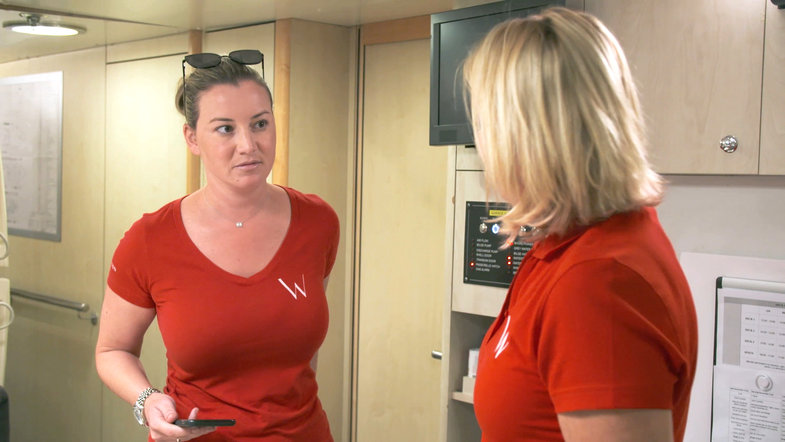 This week, we received a supersized episode of ‘Below Deck Mediterranean’, which brought in an equally supersized dose of drama.  And in the center of it all, we had Kiko! Can you imagine that? Well, we will get to the details of episode 9 later. But before that, read on to gather some detailed insights on the next episode.

Where to Watch Below Deck Mediterranean Season 5 Episode 10 Online?

Episode 9 starts off by throwing the limelight on chef Kiko who is under a lot of stress. He is needed to prepare a Vegas-themed feast. After being reprimanded by Captain Sandy Yawn in last week’s episode, Kiko is frustrated. To add to his woes, the new charter guests who land on The Wellington are Sean Foote, a record label owner, and real estate developer from Atlanta. He is accompanied by his wife Crystal, an advertising executive, and a bunch of their closest friends.

The guests demand staple yacht food like fried chicken, beef sliders, and nachos. They also ask for an anniversary dinner on the first night, a trip into Mallorca on the second day, a casino night, and a 90s-themed party on the third night. Before the charter gets started, the crew goes for a night out in Port Adriano. Alex Radcliffe and Bugsy Drake, and Rob Westergaard and Jessica More are all involved in their respective boat-mances. Kiko says that he will stay back and get started on the work for the next day.

At dinner, the crew discusses the multiple failures of Kiko. When the day of the charter finally arrives, Sandy questions Jessica if she can keep up with her broken finger. Apparently, Jess had earlier told Malia White that crew uniforms are not a priority. Malia conveys this info to Hannah Ferrier and Captain Sandy happens to overhear. Of course, Sandy is furious, although Jess apologizes.

The charter guests come aboard and it is clear that they are all set to party. A glance at the preference sheet and Kiko sees that all guests have different demands. When Sandy points out that the filet mignon looks terrible, Kiko says that the Captain always pokes judgments while never really helping in anything. Meanwhile, the sea gets rough and the boat needs to go back to port.

During the anniversary dinner, Kiko receives immense praise for his elaborate meal. At the casino night dinner, Kiko asks Hannah for guidance on the menu and she suggests a lot of finger foods. But the guests are not happy and complain about the nachos. Captain Sandy reaches the galley and confronts Kiko. He replies that how would he know what to serve when he has never been to Vegas. And when Sandy tells that his menu is like crew food, Kiko loses it. He asks her to fire him and she says that she will do that once the charter is over!