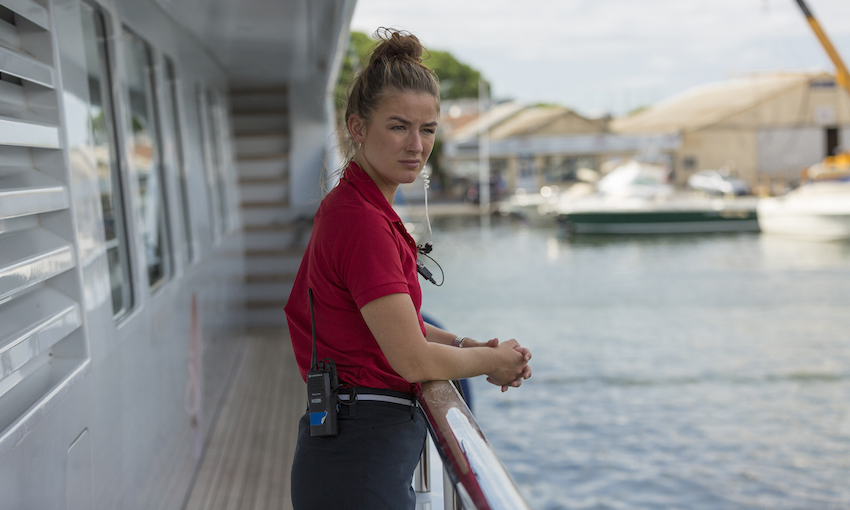 In this week’s episode of ‘Below Deck Mediterranean’ season 5, titled ‘Something’s Fishy’, Bugsy plans a naughty-themed evening for the guests aboard The Wellington. She also attempts to ease the tensions, following the fallout of cucumber-gate. Captain Sandy and Chef Tom continue with their feud while Jess is skeptical about Aesha. Alex confronts Bugsy about the status of their relationship while Rob and Jess have a romantic night out. Finally, one of the crew members is on the verge of leaving the charter when s/he makes a mistake. Well, we will get to the details of the 17th part later. But before that, read on to gather some detailed insights on the next episode.

Where to Watch Below Deck Mediterranean Season 5 Episode 18 Online?

The 17th episode starts off with Tom making Aesha cry by recounting The Great Cucumber Incident. Aesha complains to Bugsy about Tom’s behavior while Tom rants before Malia. Tensions are also brewing between Sandy and Tom, with the latter barely acknowledging the Captain’s presence. The crew gets defeated in a game on the beach and they are asked to wear speedos during dinner. On the other hand, Jess and Rob get engaged in a steamy session right on the deck.

Malia’s mom reaches Spain and wants to meet Tom for the first time. The crew also gets their tip, which is a gift card for the main guest’s restaurant in Malibu. Later, it is revealed that he has tipped the crew with a cash amount of $20K. The rest of the crew, except for Jess and Rob, go out to town. Jess has asked Bugsy to let her and Rob sleep in the guest cabin for the night.

The next day, we find the entire galley in chaos. Tom is in another of his anger fits and he has served the fish at room temperature. We can even see food scattered everywhere. Tom tells that the clean-up job should be done by Malia and the rest of the team. Captain Sandy calls Malia out of the kitchen and tells her that she should stop saving her boyfriend. Malia explains that if he does not get a helping hand, he will walk off. Sandy does not give a damn even though Tom continues to create trouble. Meanwhile, Jess is extremely jealous of Aesha.