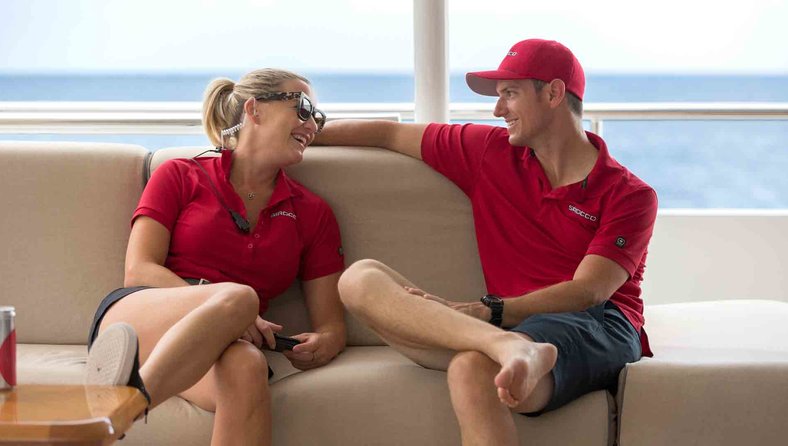 Bravo’s ‘Below Deck Mediterranean’ dropped its fifth season this week, and it brings with it many notable changes. We see a yacht led by three strong females — returning Captain Sandy Yawn, chief stewardess Hannah Ferrier, and bosun Malia White. The events of this installment take place in the striking island of Mallorca, Spain, aboard the 184-foot mega yacht The Wellington — the biggest vessel in ‘Below Deck’ history.

As the crew navigates the turbulent waters, they also need to deal with heartbreaks and professional struggles. When season 5 premiered on June 1, 2020, we already get a gist that the following weeks will have multiple life-changing moments for the yachties. We will come to the details later. But before that, read on to gather some detailed insights on the next episode.

Where to Watch Below Deck Mediterranean Season 5 Episode 2 Online?

The premiere episode introduces us to the crew aboard The Wellington, which is led by three females — bosun Malia White, captain Sandy Yawn, and chief stew Hannah Ferrier. Joining them are new yachties: stew Lara Flumiani, chef Hindrigo “Kiko” Lorran, stew Jessica More, and deckhands Robert Westergaard, Pete Hunziker, and Alex Radcliffe. And as soon as the charter begins, the guys almost instantly start flirting with the ladies. While Rob targets Jess, Pete has his eyes set on Lara. Lara, meanwhile, already gets in the bad books of Hannah when she attempts to make a joke during Hannah’s stew meeting. The duo gets into another altercation over an issue involving beers.

The first guest of the season arrives — an entrepreneur named Chris Harris who is celebrating his daughter’s 29th birthday on The Wellington. The crew then takes them on a cruise alongside the spectacular waters surrounding Mallorca. During the trip, Chris asks Jessica for spicy margaritas. Kiko serves the guests with a Brazilian dish called moqueca. The crew finally settles for dinner and Kiko serves everyone truffle risotto and a filet mignon with port wine. Meanwhile, Lara forgets to clear the table and gets another reprimanding from Hannah. But it is interesting to see that she has already started with her drama almost from the first day of her job. Well, that’s it for the premiere episode. But we have to admit that we can’t wait to see the interpersonal clashes evolve in the upcoming weeks!