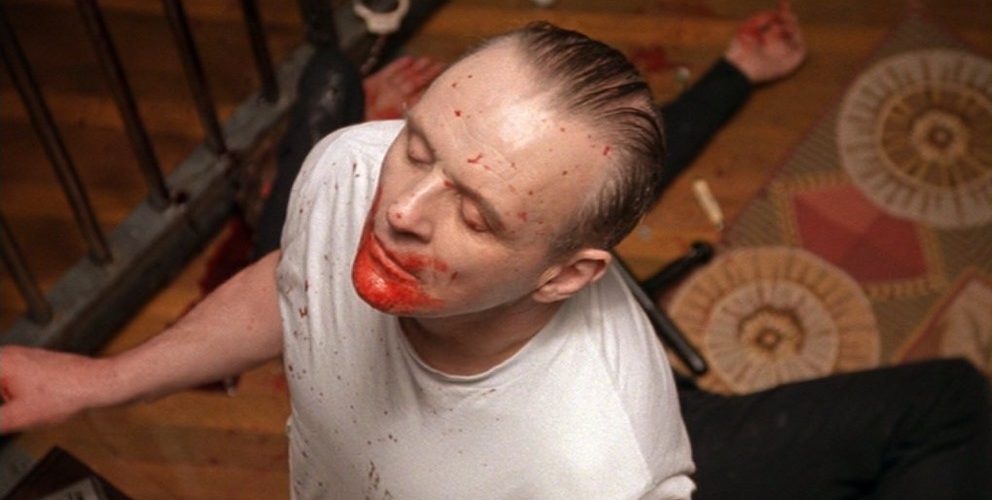 Anthony Hopkins has been in movies since the sixties, his major debut opposite no loss than Katherine Hepburn and Peter O’Toole in A Lion in Winter (1968) in which he portrayed the young Richard the Lion Hearted. Twenty three years later, a full two decades, he would win the Academy Award for his iconic, stunning performance as Dr. Hannibal Lector in The Silence of the Lambs (1991). Hopkins performance in that film as the never blinking, sees into your soul Doctor remains among the acclaimed of our time, universally hailed as a sublime piece of acting.

It seems to me rather sad that so many of his finest performances before Lector are not seen! His nutty ventriloquist in Magic (1978), slowly losing the battle with sanity to his dummy. He was marvellous as Dr. Treves, the gentle doctor caring for a The Elephant Man (1980), and won an Emmy as Adolf Hitler in The Bunker (1984) for network television.

In the years after The Silence of the Lambs (1991) he was everywhere, in intense dramas, received more Academy Award nominations for his superb performances, took risks in his work, and was more than willing to go over the top as he did as Van Helsinki in Brampton Stoker’s Dracula (1992) for Francis Ford Coppola.

But it was as Hannibal the Cannibal that he became a major star and was forever immortal. For the last twenty five years he has consistently displayed his massive talent, going from time to time over the top. But when in the zone, he is among the greatest living actors. Here is the list of top 10 Anthony Hopkins movies that prove exactly that. You can watch some of these best Anthony Hopkins movies on Netflix, Hulu, or Amazon Prime.

To watch him in this film is a study in beholding an actor who memorized the text, who knew every word said about about him before and after we see him on screen. Consider his first meeting with Clarice. Taken into the bowels of the prison, she walks past men who are living examples of human excrement to find Lector in a fibre glass cage, standing in the middle of his clean, decorated cell, well dressed and groomed offering a cordial “good morning.” Nothing about Hannibal the Cannibal is what we expect, his genius cannot be calculated by man. He stares not at you but into your soul, his eyes boring through you, taking in all he can about you. And when he finds a worthy opponent in Clarice, yes he toys with her, but he also admires her intelligence, her humility and her integrity. The scenes between them crackle with both an intensity that is sexual, yet intellectual, though we also see his dark side and carnage he is capable of wreaking. It really is a startling performance of profound originality, thought out by the actor, who connected to his director and co star to create this dark sorcery.

Within the first ten minutes of seeing Hopkins as disgraced President Rivhard Nixon, you will forget you are watching a film and be convinced you are watching Nixon himself. He does what great actors do, he captures his soul, in this case the great wounded soul of a brilliant political mind who never felt worthy of the Presidency. The film is told in a broken narrative, beginning with Watergate, which would destroy him, and moving back and forth through his career and life. Hopkins neither looks nor sound like Nixon, but captures that hunched walk, as though the burden of the world were on him (and they were) along with his own terrible issues of self esteem. Reflected to a second term in the greatest landslide in American political history in 1972, eighteen months later he resigned in shame. Hopkins brings to the role that keen, lightning sharp political mind, we can see the wheels always in motion, but we see also his mounting paranoia, his growing mistrust of all around him. The actor displays his greatness, and his shameful behaviour behind closed doors. A great, brave performance.

Another outing with director James Ivory and actress Emma Thompson, the actor well cast as a repressed, closed off butler working with a pretty, chatty maid. She loves him, that is clear, but he cannot let himself be as vulnerable as to love anyone, more devoted to his books than a single person. Hopkins, who we know can go over the top, wildly so, reins everything in her to create a very quiet man who lives to serve, and is entirely willing to live without ever loving, or making love. Despite the fact he says little, and does little other than serve, there is a strange longing between he and Thompson, a chemistry without physicality. One of the underrated Anthony Hopkins movies.

Portraying the ancient former President John Quincy Adams, Hopkins was nominated for an Oscar as supporting actor and frankly, stole the movie. Sadly, for a film being about slaves wrongly abducted from their home, Spielberg turned it into a white man riding into to save the day, as many before him have done. But Hopkins rises above that nonsense, making a strong connection to his character who in turn connects with the displaced slaves. Despite no understanding of what the other is saying, the slaves sense goodness in the old man, a friendship forged by the scent of an African violet he shows to them. When he gets into the court that is where we see his genius come out, and Hopkins fills the man with great intellect and passion. He gives the film a jolt of energy it needs.

In this outstanding adaptation of the classic novel, Hopkins portrays a repressed, rich snob, Henry, who when his wife dies falls in love with a character portrayed by Emma Thompson, who had cared for his late wife. A class snob, Henry looks down on those with less than him, but his new wife brings him down to earth when she learns and to his shock forgives his indiscretions with a young woman free with her favours. Watching Thompson break through his armour, the wall around his heart is fascinating and Hopkins makes it heartbreaking. Remarkable.

Portraying the cunning, sometimes cruel, often vicious, brilliant creator and mastermind of Westworld, Hopkins is mysteriously dark as Ford. Westworld is a theme park for adults where replicant humans, robots of sorts, populate a version of the American west where high paying customers come to live out fantasies of being in the old west. They can sleep with beautiful prostitutes, shoot down the bad guys, or be a bad guy on their own going after the good guys. Ford exerts absolute control over every aspect of his creation, like God. But such control can be morally corrupting and indeed we watch him slip into questionable behaviour and finally madness. Hopkins was superb in this Emmy nominated performance.

This gentle love story deals with loss and the staggering impact of grief. C. S. Lewis the great writer falls in love with a young woman and her son but denies his feelings for her until she is dying of cancer. At that point he realizes the depth of his feelings for her and cares for she and her son. Much of the emotion is repressed, but finally at the end both the boy and Lewis sit down n steps and sob uncontrollably at their loss, bound forever in their grief. Hopkins is outstanding in the film, along with Debra Winger.

As Corky, Hopkins is frightening as an up and coming ventriloquist who is slowly his grip on reality as his dummy Fats begins to take control. Knowing it is happening he retreats to a childhood haunt where he encounters his crush from high school, who has married a lout. He rents a cottage with Fats and together the lines between reality and madness begin to blur as Fats becomes more powerful. Hopkins trained as a ventriloquist for eight months before they shot a frame of film, and is superb. But the performances becomes deeper and much more frightening when we see Fats manifest himself within Hopkins and take over Corky, eventually used as a murder weapon. Darkly brilliant and unsettling. Hopkins was robbed of an Oscar nomination.

Portraying Hitler, the actor admitted the challenge was immense. Like most actors portraying the role he explored the madness of the man, the fury of his temper, the volcanic rages he was known to fly into. He does not approach what Bruno Ganz accomplished in Downfall (2005), but until that performance this was by far the finest incarnation of Hitler on film, big or small screen. Hopkins won an Emmy for his performance.

The first time Dr. Fredrick Treves (Hopkins) sees the grossly deformed Elephant Man, living in squalor, a carnival freak, a single tears slips down his face at what he perceives as an error of God. How could one man be so horribly afflicted. Thinking him an imbecile he takes him to the hospital to study the deformities on his wretched body and discovers the man can speak, and is intelligent. Ashamed he thought otherwise he becomes his best friend, personal physician and greatest protector. Hopkins is superb as the deeply compassionate man, a gentle soul who wants the man to have a good life, nothing more. He gives him so much more, friendship and hope.