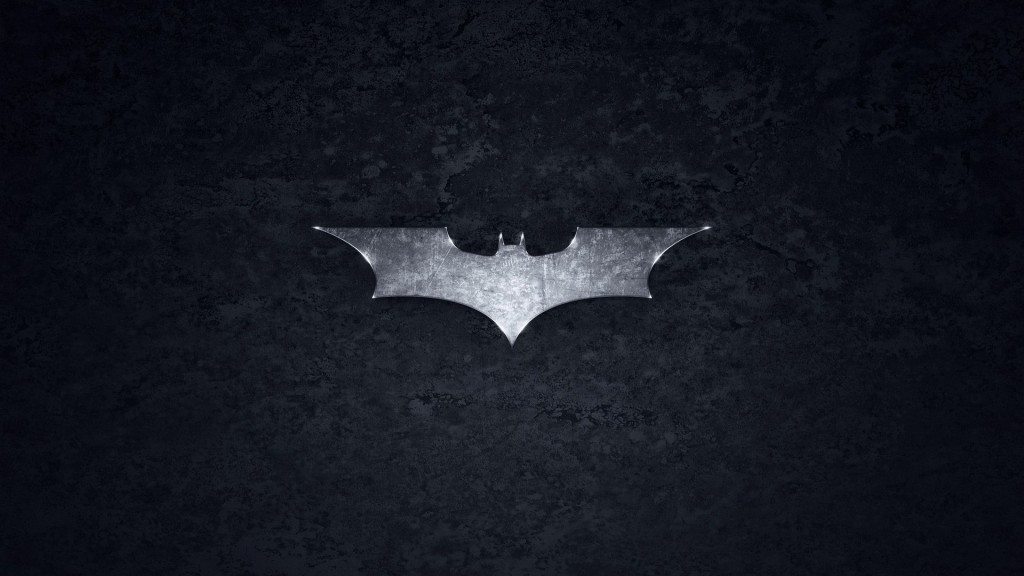 Every comic book junkie must confess that he’s living the dream. It is undoubtedly the ‘Golden Age’ of comic book movies. With studios launching close to a dozen big budget blockbusters every year winning both the box office and fandom’s hearts, it is the best time for a superhero fan to be alive. This spree of mouth-watering live-action films has re-invigorated an age-old brand war – ‘Marvel vs. DC’. Starting off with mere comic books, this rivalry has transcended beyond the realm of the print and on to the celluloid and even our television screens.

For the comic book realm, it has always been an even battle, with both sides scoring equally on fandom’s frenzy and content quality. But when it comes to the Live-action cinematic realm, DC has been having a rough time since ‘The Dark Knight’ films. They have released a string of mediocre films (‘Suicide Squad’, ‘Batman v Superman’) after the monumental trilogy; while on the other hand, Marvel is having their dream run. The television realm has been an even game when it comes to popularity with Marvel edging DC out in terms of Quality (Marvel’s ‘Daredevil’ for one).

Despite the tough competition prevailing in the aforementioned areas, DC has literally blown the competition away when it comes to one aspect– animated films. If we rule out a few exceptions (Planet Hulk for one) not even one single animated film of Marvel even lights a candle to the grim gems that DC has spawned off through the ages. With psychological depth of characters, gore and latent dark humor DC animated films have always generated a huge frenzy among fans and have been a treat to watch. With legendary voice actors like ‘Mark Hamill’ and ‘Kevin Conroy’ at their disposal, DC and Warner Bros continue to produce quality entertainment with their animated division. Here’s the list of top DC animated movies ever. You can watch several of these best DC animated movies on Netflix, Hulu or Amazon Prime. 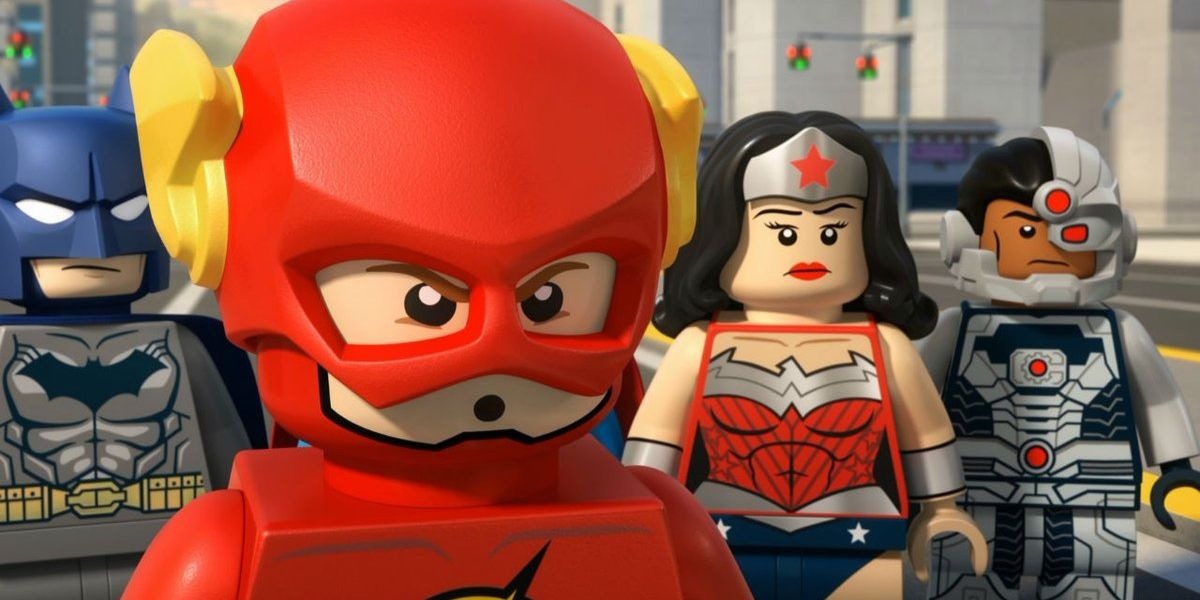 DC finally gives us a Flash film, even though it’s Lego animated. Lego Flash is the continuation of the shared Lego-DC universe, that has already given out six films. In this one though, The Flash temporarily loses his powers and is evicted from the Justice League (on account of some hilariously ridiculous doings, courtesy of Reverse Flash). Pretty standard for a Flash Story, but the added Lego dimension, a host of well known voice actors from previous DC animated films, and well, the dearth of good Flash animated movies out there, makes this one a decent fare.

The ‘Teen Titans Go!’ TV show that aired a little less than half a decade ago, wasn’t exactly a home run, and neither is this film. However, as a little spin-off series that provided comedic relief and added levity to a roster that is otherwise mostly content with its darker tales and arcs, it scored and soared for a short while. Given the current climate DC movies find themselves in, the ‘Teen Titans Go!’ animated movie was surprisngly good. The movie features beloved characters from the original Teen Titans, Robin, Cyborg, Starfire, Raven, and Beastboy, as alternate, funny versions of themselves. What’s more? The hilarious Will Arnett (The Lego Batman Movie) is roped in the voice cast for the movie. “Because if Aquaman can get a movie, anyone can.” Sure, DC! 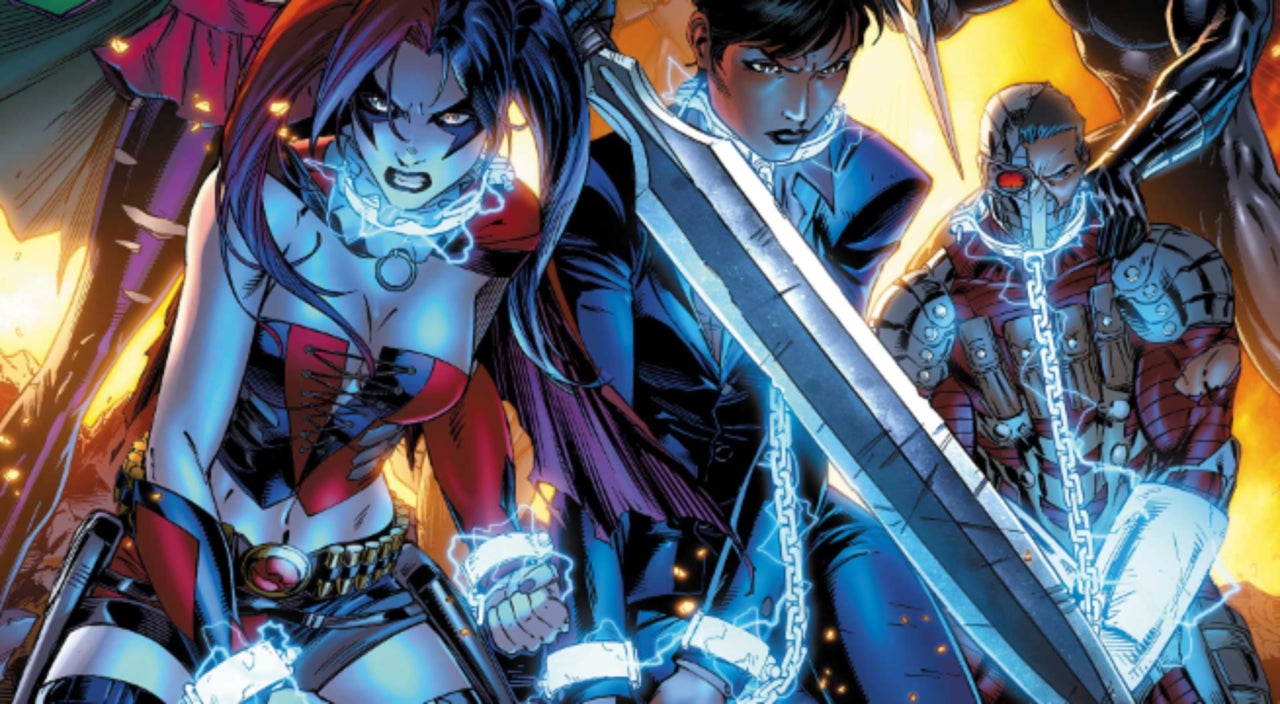 Like many other fans, I was sorely disappointed with what the DCEU’s ‘Suicide Squad’ (2016) had to offer, and had to resort to reruns of ‘Suicide Squad: Assault on Arkham’ which was superior in almost every aspect, despite being a much shorter animated feature. When ‘Hell to Pay’ was announced, my first thoughts rushed to conclude that it would be a sequel to ‘Assault on Arkham’, but it actually turned out to be quite the opposite. ‘Hell to Pay’ features Deadshot, Harley Quinn, Killer Frost, Bronze Tiger, Copperhead and Captain Boomerang as part of the Task Force-X, pitted out against other villains including Two-Face, Zoom, Blockbuster, Vandal Savage, and others in search of a mysterious, mystical object. Of course there is Amanda Waller pulling some strings, here and there, but the actual twist in the tale is that it’s set in the current DCAU continuity, rather than the Batman: Arkham universe from the videogames featured in ‘Assault on Arkham’, which turns out to be quite interesting. 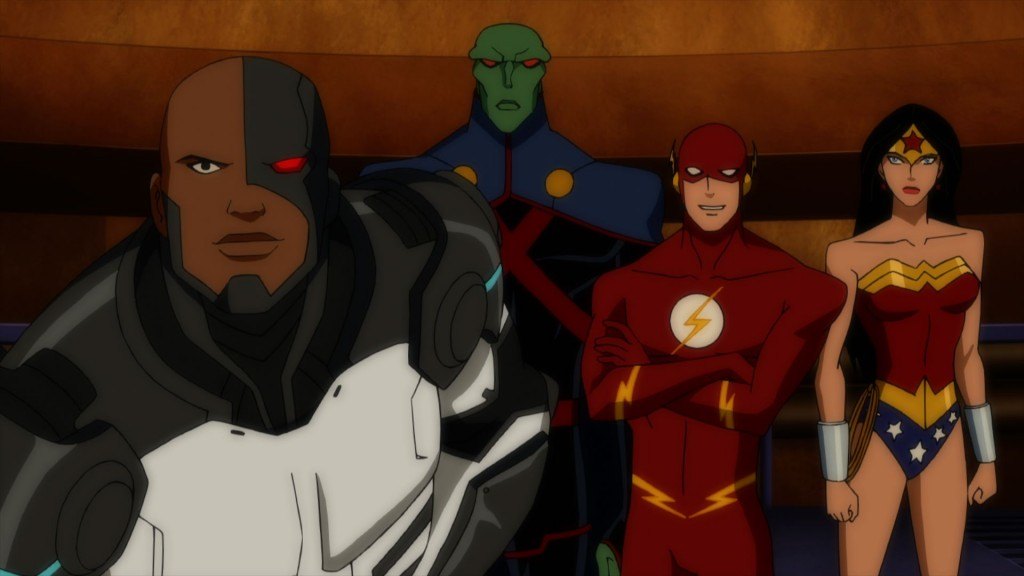 ‘Justice League: Doom’ is loosely based on acclaimed comic book writer Mark Wade’s 2000 miniseries ‘Tower of Babe’. The movie was directed by DC Universe veteran Lauren Montgomery (‘Wonder Woman’, ‘Green Lantern: First Flight’), and is the final work of acclaimed comic book writer/creator  Dwayne McDuffie, who wrote majority of the original animated series. The film also introduced Cyborg (Which we will also be seeing in the upcoming DC Live Action justice league film). The League takes on Vandal Savage’s newly-formed ‘Legion of Doom’, which comprises of some of the fiercest foes of Superman, Batman, Wonder Woman, Green Lantern, Flash and Martian. All in all, the movie embellishes the original Justice League animated series by introducing some darker undertones and delivers an immensely watchable film.

‘Gotham by Gaslight’ is the thirtieth film in the DCAU, and alongside two other Batman films, it’s R-Rated. There is certainly a degree of intensity and darkness (in the most literal sense too) you can expect from this film. It’s the first story in DC’s ‘Elseworlds’ cannon, which is a whole other continuity from the regular line-up of films in the DCAU. ‘Gotham by Gaslight’, likewise, imagines Batman in an alternate Victorian setting, and pits him against the infamous serial killer, Jack the Ripper, while Gotham, re-imagined in the Victorian era here, deals with the mysterious appearances of a bat vigilante. For all Batman fans out there, this film is gold.

7. The Death of Superman

The fall of Superman in his fatal battle against Doomsday is now, a storyline nothing short of iconic, and has been sufficiently adapted for the audience to know its basic premise, namely in the third act of ‘Batman V Superman: Dawn of Justice’ and in the first ever DCAU film, ‘Superman: Doomsday’ (2007). However, since the source material was broadly condensed and watered down in accordance with the 90 minute and PG-13 restriction on ‘Doomsday’, DC decided it was time to give fans a faithful adaptation of the most iconic Superman storyline yet. ‘The Death of Superman’ is the first in the two-part adaptation, and accounts for the first two arcs in this continuity: Superman’s battle till the death with Doomsday and where the world comes together to pay homage to the fallen superhero. If you are a fan of Superman, you are going to love this one.

6. Batman Beyond: Return of the Joker 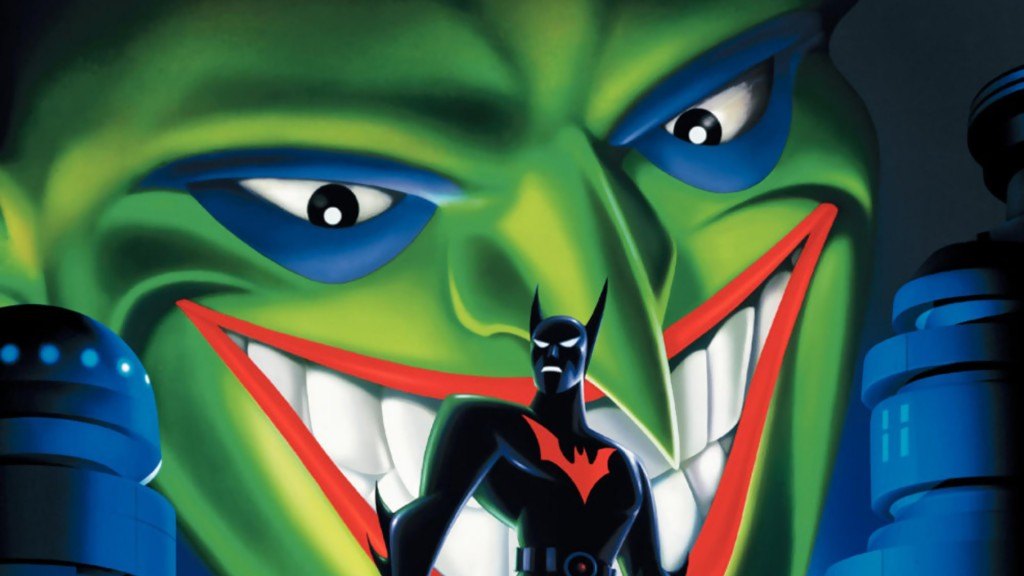 Batman beyond universe is set in futuristic setting of Neo Gotham. An aging Bruce Wayne has retired from crime fighting and passed on the Mantle to teenager Terry McGinnis. Mark Hamill reprises his Iconic joker role for the film. The central plot line is hinged on the mystery behind the sudden resurgence of Joker after 35 years. We see Bruce Wayne filling Alfred’s shoes for Terry’s batman, which is quite a revelation. The film has an equitable mix of Style and substance and works as an impeccable homage to the original Batman Animated films.

5. Batman: The Rise of the Phantasm 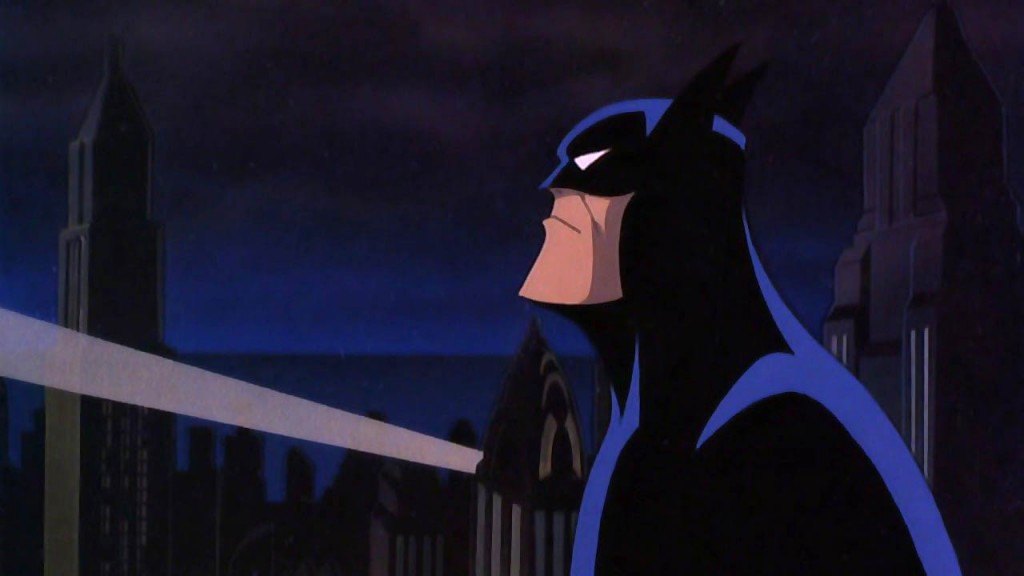 ‘Batman: The Rise of the Phantasm’ is based on the classic 90’s animated TV series, with Hamil and Conroy reprising their iconic roles. The film delves heavily into Bruce’s back-story and introduces us to his old flame- Andrea that led him conflicted about his crime fighting life. Many consider the film to be better than the earlier theatrical Batman adaptations, and it remained the best Bat Movie to hit the big screens until Batman Begins shook things up in 2005. 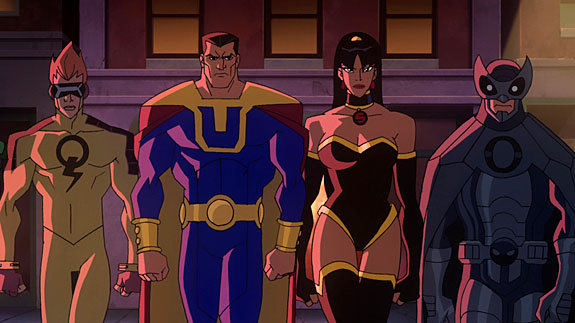 Set mostly in an alternate universe, the movie chronicles Justice League clashing with their evil counterparts in the Crime Syndicate after a “Heroic” Lex Luthor from another universe arrives in their world to seek their help. In his own universe, Lex is the former leader of the Justice League, and its sole remaining member. With no one left to stop the Crime Syndicate, Earth’s (Ours) Justice League is his last hope. It takes some convincing, but eventually Superman Wonder Woman Flash and Martian Manhunter join him. The film packs in a lot of action and is a delight to watch for both die-hard fans and newer ones. 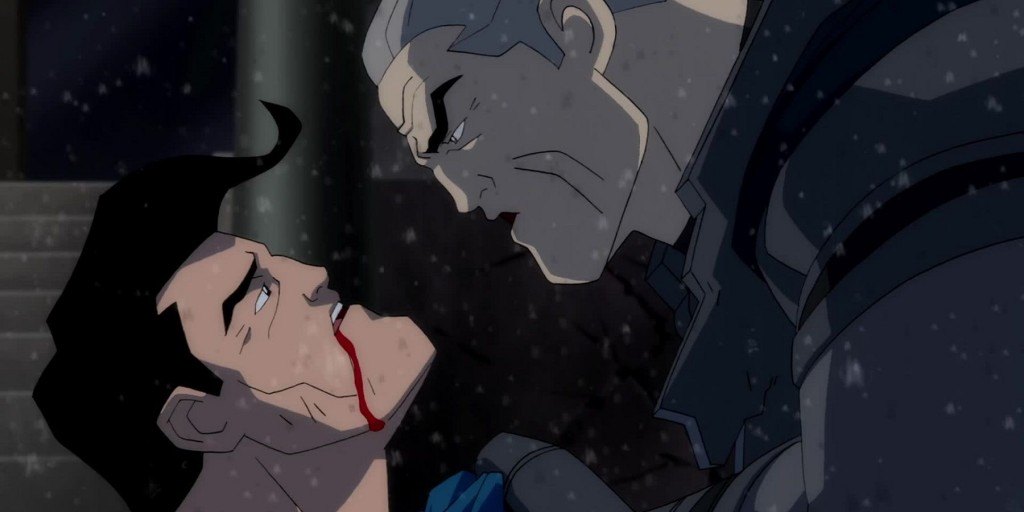 I have decided to club these gems together as a single entry because the list is about the entire DC universe and not just Batman. But can you blame us? Batman’s notion of heroism, righteousness and his sense of justice resonate so well with all of us that he has become the favorite superhero of our generation.

Director Jay Oliva took on the challenge of adapting the monumental 4 part eponymous graphic novel created by Frank Miller (creator of sin city and 300), which was considered by many to be too twisted and complex for an animated adaptation. The film is a roaring success and does complete justice to Miller’s work. The First part opens with Bruce Wayne becoming Batman again in order to stop Two-Face, and ends with his war against the Mutants. Part 2 covers a final confrontation between Batman and The Joker, which leads to Batman being marked as a fugitive and Superman assigned to bring him in. The film culminates with an epic battle Batman and Superman and an unexpected twist.

2. Batman: Under the Red Hood 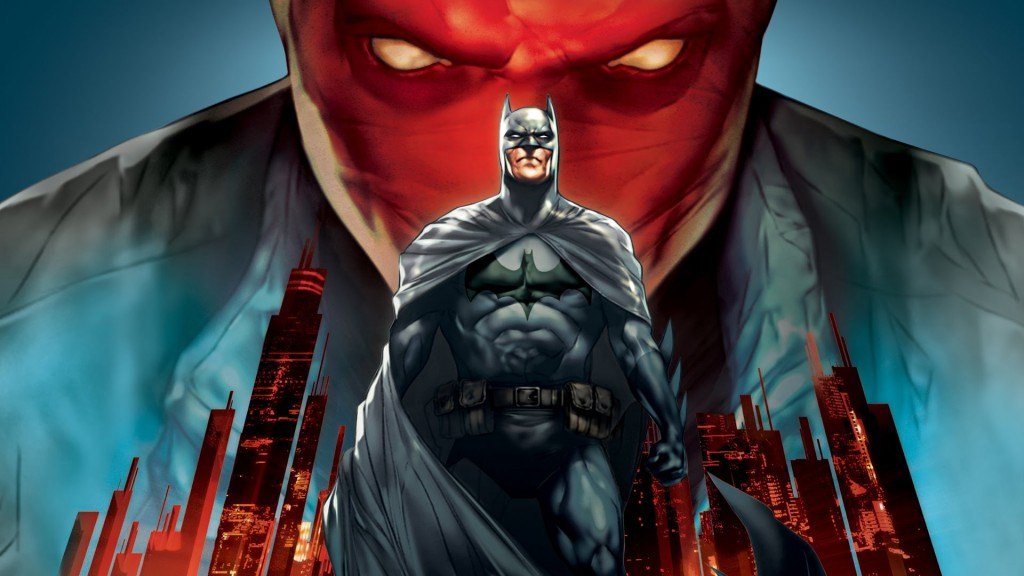 For me, this is hands down the Best Animated Batman movie. The film introduces us to Red Hood, A man who is hell-bent on cleaning the city of Gotham and seems to know every move of Batman. John DiMaggio as The Joker is both hilarious and menacing and seems a worthy successor to Hamil. The Red Hood takes Batman’s own concept of vigilante justice and pushes it to its boundaries. He forces Batman to introspect into his own ways. 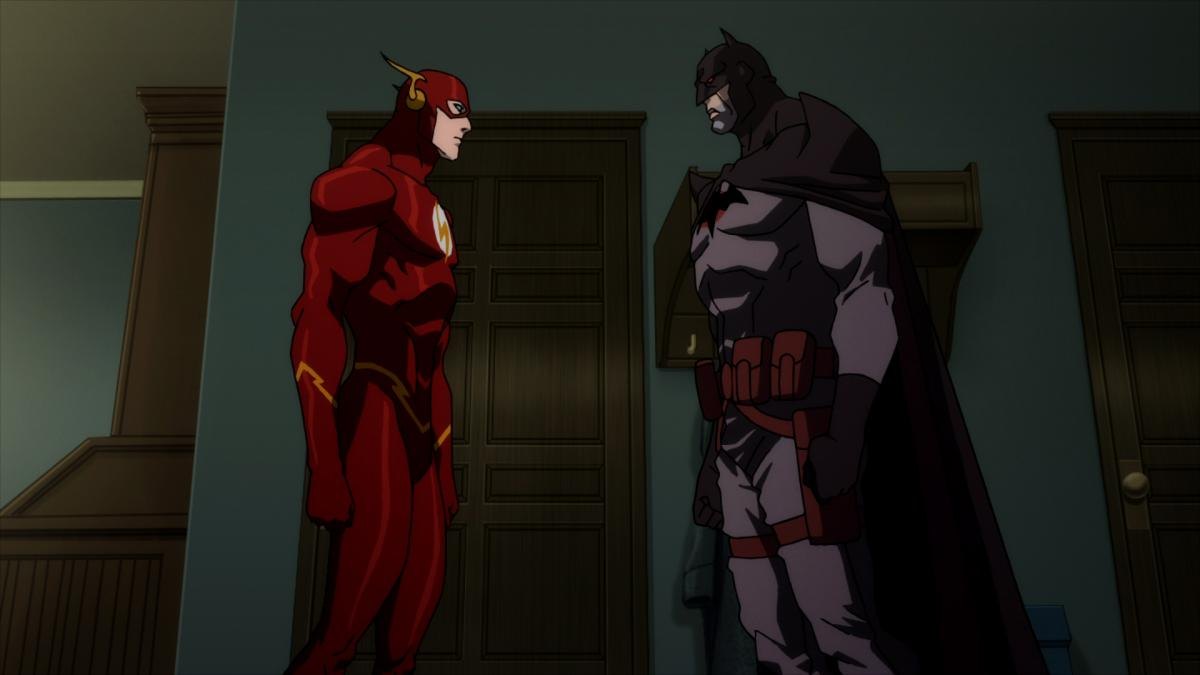 It was a tough call between ‘The Flashpoint Paradox’ and ‘Batman under the Red hood’ for the top spot, but I had to go for the former; firstly, because it is not just a Batman (The most heavily monetized DC character) Film: it stresses on The Flash, which as a character has been slightly overlooked when compared to Batman and Superman. The Flash gets the chance to go back in time to right a wrong. He traverses time to prevent the murder of his mother and unknowingly generates ripples that leave his present and future in a state of decadence. The new reality is grim and the world is in a state of chaos.  Superman is nowhere to be found, Batman is extremely violent and completely devoid of his code of justice. Together, they try to restore the continuity of Flash’s original timeline while this new world is in midst of a terrible war between Wonder Woman’s Amazons and the Atlanteans, led by Aquaman. The film is bold, gory, shocking and in some parts – pure genius. The flash in this film proves to be “One Hell of a Messenger”.