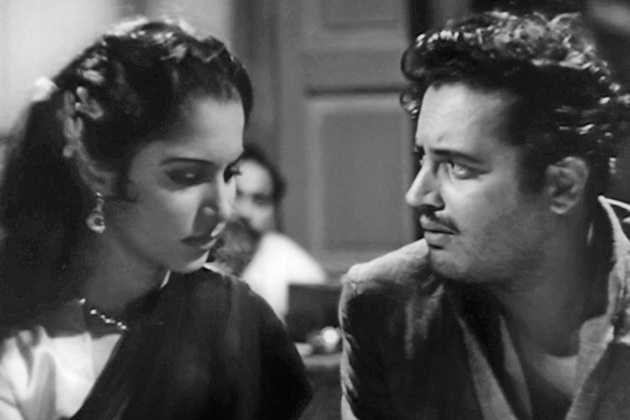 They say old is gold and they are not wrong you know. The 50’s was a glorious period for Indian cinema with the legends taking center stage. Guru Dutt, Raj Kapoor, Dilip Kumar, Madhubala etched to the hearts of the audiences and generations to come. It was the period of grace and revelations for Hindi Cinema. Here is the list of best Bollywood movies of the 1950s. You can watch several of these 50s Bollywood movies on Netflix.

This is a story of the need for justice. This Raj Kapoor produced film had a young boy travel to Delhi to seek justice and an adrenaline rushing race begins. The movie was written by Rajinder Singh Bedi and starred Yakub, Motilal in pivotal roles.

The harsh reality of life where children are left to fend for themselves after their parents pass away, the cruelty of greed driven relatives and the intervention of fate changes the lives of two siblings who give up begging and learn self-respect and find happiness eventually. This is a Raj Kapoor production which went on to win Filmfare Best picture award.

This Dilip Kumar starrer was one of the highest grossing movies of the year. The movie shows the struggle for love and the inability to brook unrequited love. The grace and prowess of Dilip Sahaab and Naargisji set the screen ablaze.

The movie was Inspired by Hollywood movie Gilda and had Dev Saahab in the main lead and Guru Dutt Saahab at the helm. A morally ambiguous hero and gambling, this was crime thriller with scintillating music. Dev Anand as the ace gambler gave a spell binding performance.

Dev Anand, Waheeda Rehman and the ever humorous Johnny Walker ji . Dev Sahaab plays the role of an inspector investigating the death of a newspaper editor. The movie was a huge success and it also marked the debut of Waheeda Rehman.

The elegance of Madhubalaji, the grace of Guru Dutt and the humor of Johnny Walker – the trio set the silver screen ablaze with their presence and performance. It showed that modernization doesn’t necessarily mean cutting ties with our traditions and culture. The movie’s take on the society is quite different from its contemporaries.

This is historical movie which portrays the life of a fictional character Baiju who challenges maestro Tansen to a musical dual to avenge his father’s death for which he holds Tansen guilty. The movie known for its breakthrough music, the power house performances of Bharat Bhusan and Meena Kumariji. The film celebrated 100 glorious weeks at the box-office winning hearts all over.

Ashok Kumar and Meena Kumari once again leave us hypnotized with their performance, elegant intimacy and grace. Before Saif and Vidya took over the roles it was them who had immortalized Sarat Chandra Chottopadhyay’s classic. Till date it is considered to be the most faithful adaptation of the novel.

Kishore Kumar, Ashok Kumar and Anoop Kumar all together in this comedy- what more reason do you need? If that isn’t reason enough then the sensational Madhubalaji, music of S.D. Burman and a beautifully crafted story line and the fact that it was the second highest grossing film of the year should do the trick.

The trio of Raj Kapoor, Nutan and Hrishikesh Mukerjhee give us the wonderful tale of Raj who falls in trouble when his landlady dies after having a medicine that is manufactured by his employer. The music of Shankar Jaikishan won the Filmfare Best Music Director award and the movie won President’s silver medal for best feature film in Hindi.

Bhansali’s film had stars, glitz and glamour but it was Dilip Saahab who brought Devdas to life and gave him a soul. This movie also marked the Hindi debut of Bengali sensation Suchitra Sen as Parvati and Vyjayanthimalaji showed what Chandramukhi was meant to be. The memorable music of S.D Burman and the National Awards further add to the glory of this spectacular spectacle.

It deals with reincarnation and previous birth. Dilip Kumar, Vyjayanthimala and Pran are in pivotal roles and had a Gothic Noir feel to it. It was a huge success commercially winning multiple Filmfare awards. This was the highest grossing film of the year and helped Bimal Roy regain his financial stability. The movie dealt with Dilip Sahaab remembering his past life and taking revenge against those who wronged him.

B R Chopra’s rustic movie had its heart in the right place and this classic deals with the advent of industries and machines and their affects and was a new a fresh endeavor on the Indian screen. It proceeds to show the triumph of human spirit when pitted against insurmountable hurdles and obstacles. Dilip Sahab and Vyajantimalaji hold the film together leaves us mesmerized.

Raj Kapoor at his best once again and he gave us “mera dil hai Hindustani” to hum through till eternity. The sinful world of the rich and gambling teaches Ranbir(Raj Kapoor) a lesson that we all need to keep in mind- never judge those different than you and never look down upon with less than you.

This list would be incomplete without Raj Kapoor’s Awara. It was an iconic movie and remains so till today. The elegance of Nargisji and the flamboyance of Kapoor is forever unforgettable. The legendary score still sweeps us off of our feet. The strong storyline and even stronger performances deserves all the adjectives ever associated with it.

The movie won a silver bear at the 8th Berlin International Film Festival. The movie shows how a jail warden through determination and dedication rehabilitates six dangerous prisoners bringing out the virtues that lay hidden in them. The movie ends with his dead but through powerful scenes the movie sends its message clearly that hard work and goodness are irreplaceable.

Guru Dutt is at it again. He strikes all the correct notes. The journey of a film maker who disappears into the abyss of darkness never to be redeemed is held as a cult classic though the audience was quite harsh in their judgment at the time of the film’s release. This is the last film with Guru Dutt at the helm and it deserves our multiple viewings.

A social take on a poor farmer’s life and the struggles and hardships his family faces this movie had elegant performances from Balraj Sahani and Nirupa Roy. The cruelty of the rich and the inhuman oppression of the poor screams through the silver screen telling us to open our eyes to the injustice that is all around us and yet we so conveniently miss it.

Nargis Dutt made history with this movie and this was a turning point in the history of Indian cinema. Nargis Dutt gives an exceptional movie where poverty doesn’t let a woman compromise with her dignity and moral code. This movie was and forever will be a landmark for Indian movie.

Guru Dutt and eternal love is synonymous. The movie gave us songs that we can never forget, the graceful love between Guru Duttji and Waheeda Rehmanji. The movie is Guru Dutt’s masterpiece and every time our eyes tear up when we see him hum “jaane who kaise log the jinke pyar ko pyar mila.” The dark cloud of pessimism that hovered over the movie made the sun set in our hearts too and the eternal struggle between materialistic need and spiritual tranquility troubles us throughout. You’ll be a fool to have missed this classic.