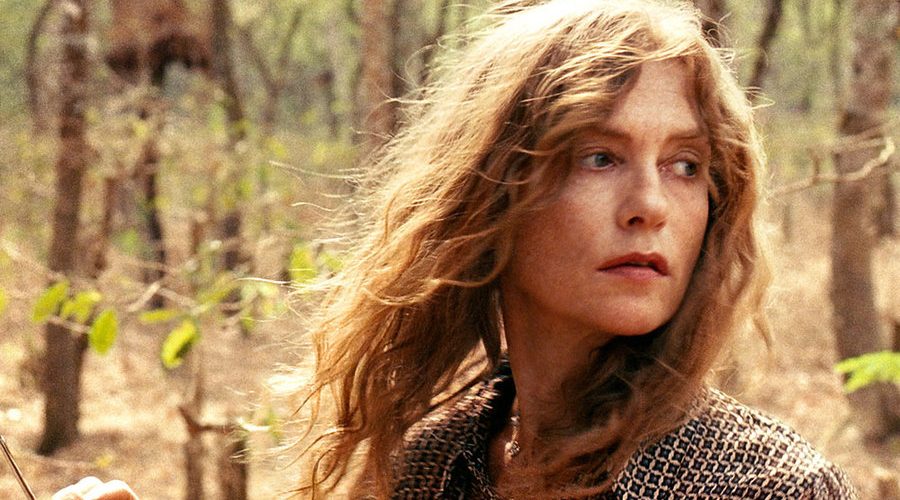 It is a modern travesty that Isabelle Huppert has never won an Academy Award. A record that was further embellished, when she got nominated for the first time in 2017. It absolutely blew my mind that one of the greatest contemporary cinematic thespians of our age had no wins, and even more shockingly so, just one nomination. This is where the barrier of language prompts us to reconsider our protocols and policies.

Huppert is a seasoned veteran, having appeared in more than a hundred films in a career spanning more than four decades. Her universal critical appeal and reception are unparalleled in the industry and has won her innumerable international awards. Her rebelliously intrepid way of inhabiting a character and lending it a visceral touch of tangibility is inexplicably mesmerizing. We decided to put together a list of the top Isabelle Huppert movies. You can watch several of these Isabelle Huppert movies on Netflix, Hulu or Amazon Prime. In a word: exquisite. Huppert has this penchant of taking up roles that are inherently melancholic in tone. And oh God does she do a wonderful job. She assumes the titular role of Gabrielle, a strictly regimented simpleton wife of a cantankerous businessman, who manifests no joy from her life. She eventually leaves his husband for another man, rather a passionate lover, to find happiness and satisfaction in life. Jean, her husband, doesn’t take it well, and while he contemplates, Gabrielle realizes her mistake and comes back to reflect on their “marriage”. A substantial portion of the film is a merciless and scrutinized prognosis of their failed relationship, which required both to actually act. The pain in he eyes gleefully reflects the character’s emotions, and pierces through our hearts like a surgeon’s scalpel. She lets loose of all her inhibitions and rises triumphant, like a burgeoning phoenix from the ashes. 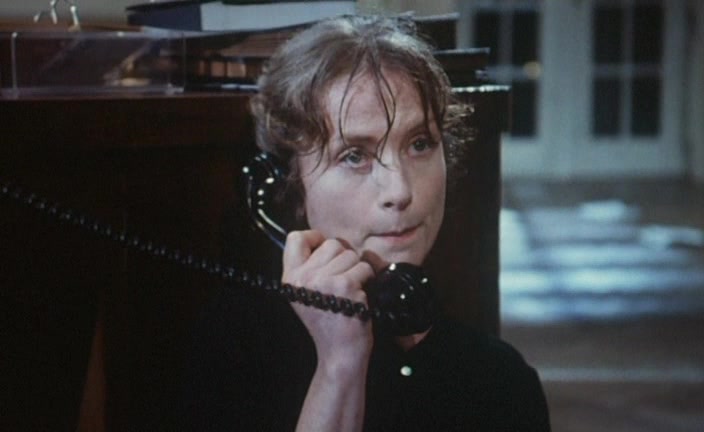 Another story of turmoil and moral quandary, and another magnificent performance. The film explores her relationships with contrastingly different emotions and facets: one brazenly intrepid and compassionate in nature, the other reluctantly suppressed and introverted. The common denomination between the two is Huppert, who shoulders the movie with a stupefying performance. Filled with anguish and corked fury, Huppert is able to relay us a sense of confusion, pleasure, and perverse guilt. The way she is able to change gears and lay to us an immortally layered performance is a scathing testament to her unbridled and rebellious character. She simply can’t put a foot wrong. The movie itself is grossly underrated and painfully ignored. It convalesces on eight women, who assemble together in a god forsaken house to vacation. The mysterious murder of their patriarch shocks them, and makes every one of them a suspect. The resulting situations culminate in hilariously funny scenes about the prevailing secrets of the women. Huppert simply exhausts all her resources and delivers a resounding performance, one that embodied almost all emotions, from impeccable comedic timing, to cringing emotional scenes. The inhabitation of the tachydariac Augustine took us on a roller coaster ride, which though was uneasy and ambivalently pleasant to sit through, resulted in an emotionally satisfying end. 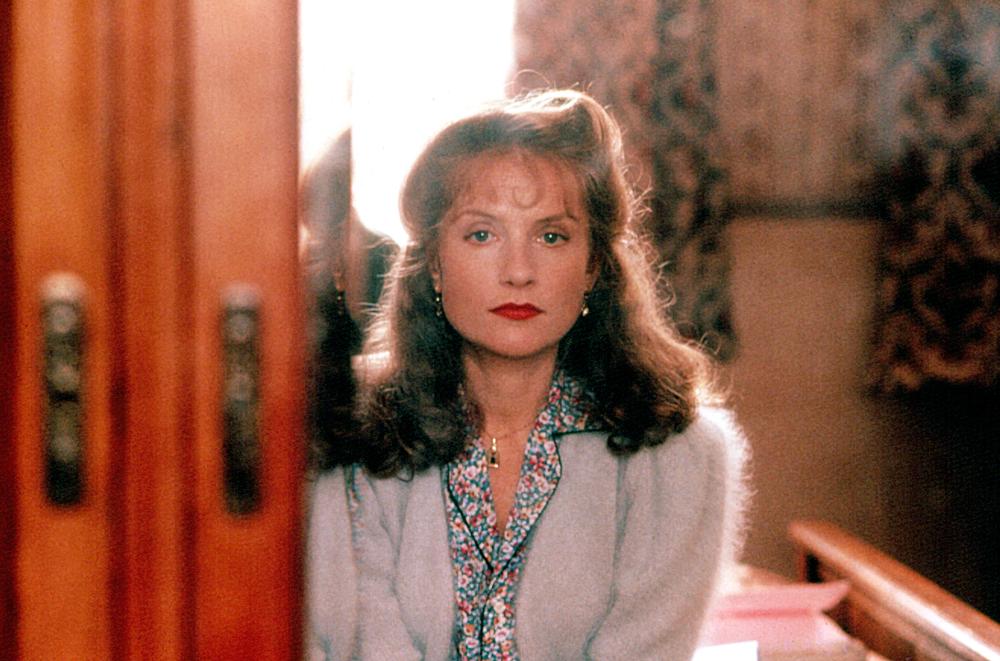 In giving life to Marie Latour, Huppert was able to give birth to a character whom we rapturously applauded for her courage in supporting her family, and unflinchingly criticize for the way she did it. Set in the WWII era, the film’s rustic feel and exploitative touch of a significant subject matter work very well in its favor. But nothing except Huppert’s performance gives the movie a well-rounded look and theater experience. Her vociferous support for feminism, yet her ironic profession of an abortionist highlight the founding principles of life: you don’t get to choose what you do, but you choose how to feel. And she compelled us to feel what she felt and sentient us of experiences we never had the good fortune to have.

Age is but  bourgeois construct. Huppert reversed the chronology with a performance replenished with maturity far beyond her years. A movie blatantly ignored, and a performance fatuously forgotten, I found it on the net, resting peacefully in oblivion. A partial docu-drama of Swiss artist Aloise Corbaz, the film is a riveting tale of unfulfilled dreams and fatal infatuations. Her metamorphosis from a talented artist and a decent human being, to a failed plagiarist and a demented patient is emotionally eviscerating and blindingly painful. Huppert brought her intrinsic character nuances to the fore, and managed to pulverize the audiences with a scintillating performance in an otherwise uninspired movie. 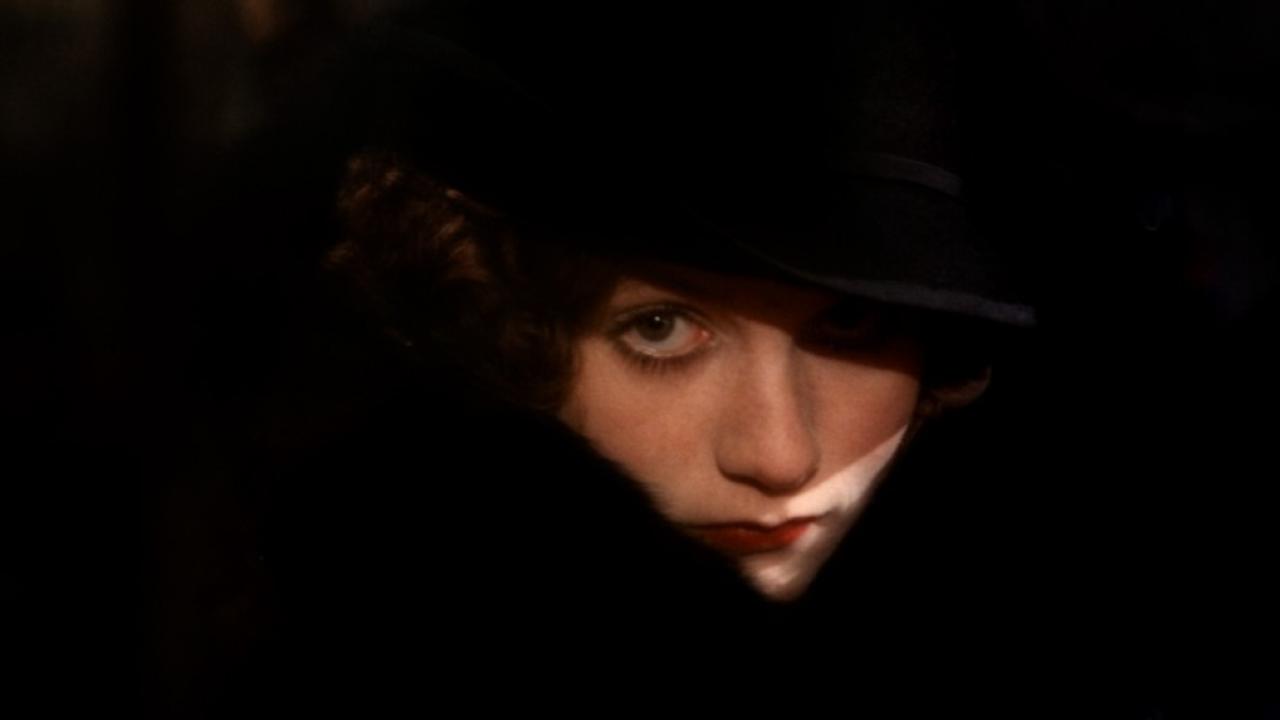 Hauntingly beautiful and deeply poetic, this performance won Isabelle her maiden award at the Cannes. Changing colors and donning the cloak that of a mysterious and unfettered teen-prostitute, she gives us a harrowing peek into Violette’s life. The movie chronicled the events of a true incident in 1930’s France, and focused on Violette Noizerre, and her surreptitious work as a prostitute. The occupational hazards land her syphilis in gratitude, which has disastrous events following it, including the murder of her entire family by her, and her subsequent arrest. It is perhaps the darkest she has gone yet, and boy did she do a good job. The performance was pivotal in establishing her credentials in her native land, and also fetched her global fame and universal acclaim.

‘Things to Come’ offers quietly profound observations on life, love, and the irrevocable passage of time. It was one of my favorite movies coming out of 2016. A passionate middle-aged philosophy professor (Isabelle Huppert) rethinks her already much-examined life after an unforeseen divorce. She finds an able companion to accompany her for her subsequent journey. The beautifully crafted film had me in tatters by the time it ended. It certainly was an orgasmic experience seeing Huppert in this avatar on screen. The titillating sneers and the deft rolling of eyes stole the audiences’ hearts and rendered them immobilized with its charm. One of the very best! 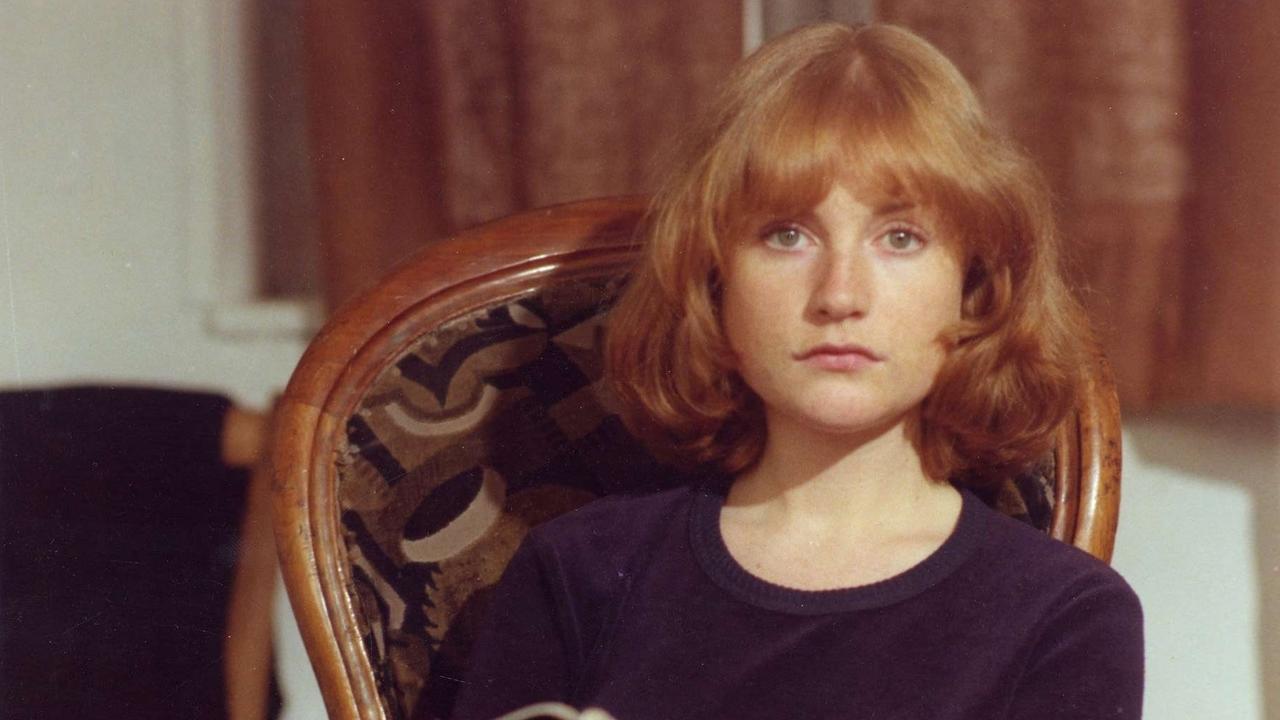 A tale of abandoned love and enkindled passion, ‘The Lacemaker’ was Huppert’s finest performance till date. The introverted and virginal Beatrice is left alone in the twisted world by her best friend, who flees with her lover. She eventually finds a reciprocating respondent, Francois, with whom she falls in love. The opulent and infouential background of the boy’s family render Beatrice uncomfortable and asphyxiated. Her deep reserve begins to annoy him and they split up. Losing interest in life, she ends up in a mental hospital. Full of remorse, François visits her but she wants nothing: she has found a quiet place that suits her inwardness. In her silent anonymity, she is like the unknown girls in paintings such as the Lacemaker. Don’t miss it for the world. 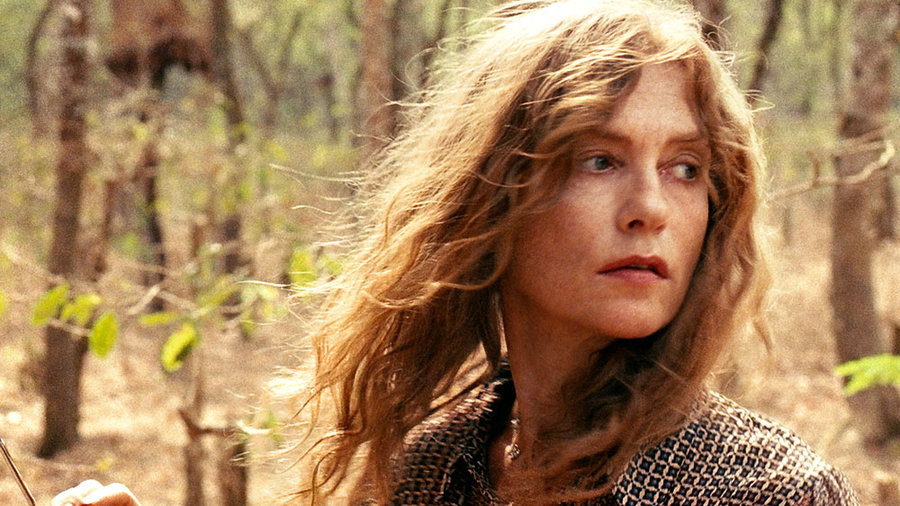 Huppert pays a white French girl who is caught amidst turmoil and racial conflict in a Francophone African state. The brutal honesty and sincerity with which she plays her character reflected her exemplary restraint and indignant fervor in a thoroughly layered performance. In this understated but brilliant film, she brought out her A-game. Claire Danes, the director, gives her the canvas to shine all throughout the film. And Huppert not only sparkles in the role but makes it completely her own. 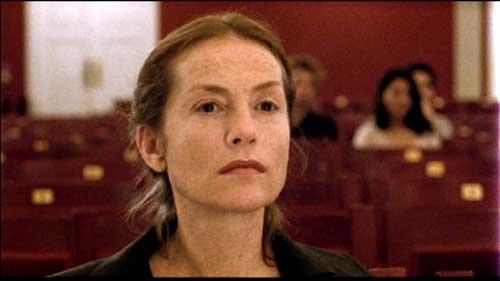 I don’t know when I saw her in the movie, why she resembled ‘The Office’s Angela Martin. In a cold and despairing performance as an exploitative piano teacher, Huppert deserved no less than the glittering Golden statue to take home.  It tells the story of an unmarried piano teacher at a Vienna conservatory, living with her mother in a state of emotional and sexual disequilibrium, who is attracted to a pupil but in the end repels him by her need for humiliation and self-harm. The silent and smoldering looks won it for me. They left us petrified, and at the same time gave us a peek into a self-loathing and lonely individual, wallowing hopelessly in the carpet of solitude.

Hmm. The movie has brought on a bout of writer’s block I guess. Despite all that, I’ll continue to strive and put this ineffable performance in words. She starred as one of the murderous maids, in a movie inspired by the true case of Christine and Lea Papin, who murdered their employers in cold-blood. Her first Caesar win was a well-deserved one. Her eerily disturbing paranoia and conniving throughout the movie kept us irritated and on the edge of our seats. The acting paragon broke all barriers and played the role with proficient dexterity. 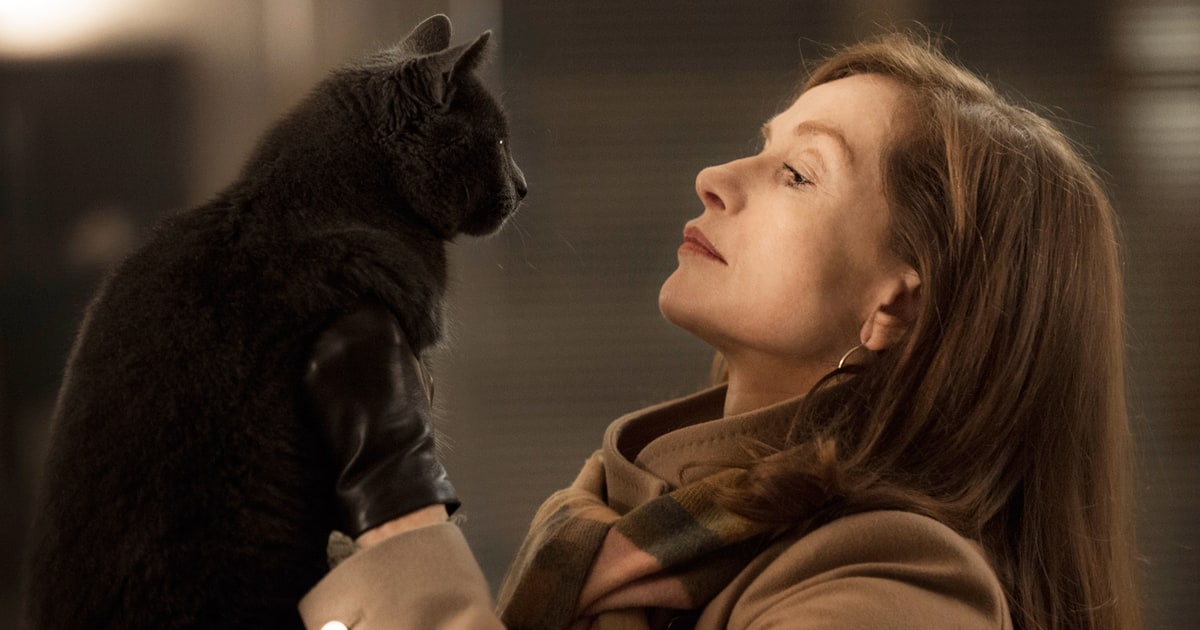 I consider myself grossly incompetent to put into words one of the greatest performances I have seen by a female lead in a movie. Without any disrespect to Emma Stone, who sincerely deserved the trophy, Huppert was the hands down winner. I mean, how could someone be this good? Phew, please drop everything and watch the movie. I can’t write more.