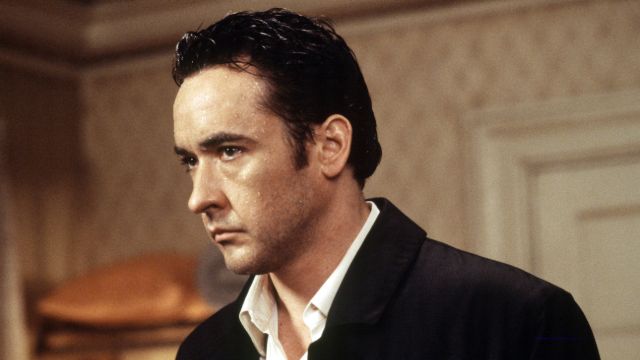 Best described as quirky, Cusack emerged in the eighties, a dark-eyed, smooth-faced leading man who quickly established himself as a fine actor. He seemed to always be the smartest guy in the room, until he was not and then he was left figuring out why? The image best remembered of him is as Lloyd Dobler, his heart-broken, holding a boom box high above his head as Peter Gabriel’s In Your Eyes flows out of it, the sound finding his lady-love who ended their relationship because her father told her too. It has been called the most romantic gesture in movie history and may well be.

Through an array of sometimes bizarre film roles he carved out a reputation as an excellent actor willing to take risks, more than happy to go where others cannot go. It was if he saw the subtext or a subtext no one else could see.

Most of the time he played a nice guy, but when he moved into darker waters, he was equally superb. His stunning performance in The Paper Boy (2012) was remarkable, a seething portrait of pure evil. We had seen him portray shifty characters before, but never downright cruel, vicious people. He brought an alarming intensity to his role, a leer that was unsettling, creepy, unlike anything he had done before, it was refreshing to see we had not seen everything he could do.

Two years later, that same actor was so revolting broke our hearts as the damaged Beach Boy Brian Wilson in Love and Mercy (2015) a brilliant film in which the actor plays the older Wilson. Vulnerable and wounded, Cusack was magnificent in the film, reminding us of his greatness.

With his black eyes, pale complexion and truthful acting the actor has always brought great honesty and integrity to his work. Surprisingly tall, the lanky actor has the kind of talent that dwarfs those around him. Here is the list of top John Cusack Movies selected from his vast filmography. You can watch some of these best John Cusack movies on Netflix, Hulu, or Amazon Prime.

The actor became the face of a generation as lovesick Lloyd, a kickboxer who falls hard for the class over achiever Diane, who in turn falls for him. They are smitten with one another, she gives her virginity to him, and then suddenly shatters him by breaking up with him at the behest of her father. When her world falls apart, it is Lloyd she seeks out, and he accepts her without hesitation. He has the confidence to know that the heart wants what the heart wants, and he wants her. She loves him, he loves her. There is a haunting, heartbreaking image of lovesick, wounded Roy with a boom box playing “their song” loud enough for Diane to hear, holding it high above his head. When they visit her father in prison, the older man finally realizes Lloyd does indeed love his girl, and she is in good hands. He will take care of her and never stop loving her. Lovesick was never so beautiful.

As the owner of a used record shop, Cusack is terrific as the decent guy who has just split with his long time girlfriend. Devastated by the loss, he cannot wrap his head around why she has left him for an older, wealthier guy. He calls her, with the intense loneliness that comes with a recent break up, and struggles to figure out what was wrong with him, why did she dump him? In the meantime he tries to keep order at his record shop. Cusack beautifully captures what it is to be so deeply emotionally wounded and how difficult it is for guys to come to terms with being unceremoniously dumped for another.

Brian Wilson of the Beach Boys was a musical genius, gifted beyond belief, but he was also bi-polar, and when off his meds was a danger to himself and others. In this interesting film, Cusack portrays the older Wilson, while Paul Dano is the younger, and despite the fact they look nothing alike, it works. We believe that young Dano will become Cusack, a bold move but it works. There is a lovely chemistry between Elizabeth Wilson and Cusack, she just gets him and loves him for who and what he is. The actor burrows deep into Wilson, capturing what the disease does to him, what the drugs he was taking did to him, and how he fell in love with a woman he felt safe with, who he clung to like a life jacket. That he was still able to create music after this nightmare is extraordinary. A brilliant piece of acting, with Cusack using every part of his body and voice to capture the heartache yet genius of the Beach Boy. One of the underrated John Cusack movies.

Very funny black comedy that allows the actor to work again with his gifted sister Joan, an extraordinary acting talent. Cusack co-wrote the film, no doubt bringing to it much of his droll personality. As a for hire hitman, he works out of an office with his terrified assistant (Joan), who lives in constant fear of her life, but looks after contracts and his schedule. Called back to his hometown for a high school reunion, he discovers a rival hitman is hot on his trail, contracted to take him out, but having reconnected with the love of his life his starts thinking about other things and drops his guard, which of course brings about chaos, and murder. Very funny, with the actor at his very best.

Cusack is Roy, a smart, cocky, short con artist who makes a good living slipping bartenders the wrong amount of cash or getting into a poker game with his own dice. Back into his life comes his mother, herself a numbers runner for the mob, a dangerous bleach blonde beauty who might harbour incestuous feelings for her son. Roy’s girl is a deadly little minx who is onto Roy and wants him to get into a long con with her. Roy tries to get them both out of his life with fatal results. An exceptional ensemble, with each portraying vicious characters willing to go as far as it takes to have their way. The scenes between Cusack and the great Anjelica Huston crackle with a creepy sexual tension.

Cusack is pure evil in this strange little film as a backwoods Southern boy who has been jailed for murder. Creepy, sleazy, his eyes make him look dirty minded because he is not looking at Nicole Kidman, he is daring her to take off her clothes. He will prove her doom, and he does so with such careless abandon, as though butchering one of the gators he pulls from the swamp. A stunning piece of acting because it is so unexpected, coming out of nowhere. That stare, that open mouthed gape of the utterly mad will haunt you long after seeing the film. Such an evil, cruel and vicious character, put on earth to wreak havoc.

Many actors have taken on the Woody Allen role as the great director-writer has aged, Kenneth Branagh terribly, Cusack, brilliantly. Wisely he does not choose to imitate Allen, but instead brings Allen’s essence to the role of a nervous playwright who has his latest work bankrolled by the mob, bringing all sorts of complications to his life. His leading lady manipulates him into re-writing her part, convincing him she loves him, while a bodyguard for the mobsters moll cast in the play turns out to be a writing genius. Cusack is wonderful, from beginning to end as a writer always second guessing himself, surrounded by theatre types that, trust me, are very real. An under appreciated masterwork.

“Malkovich”! That name becomes sort of war cry for this wildly original film in which the great actor John Malkovich has people wandering around his brain. Cusack is in fine form as a lowly office worker who goes through a door and finds himself in a small room that will eventually deposit him in a The brain and mind of actor John Malkovich. A role like this requires a huge leap of faith from the actors, they must go with you heart and soul, and Spike Jonze worked miracles with the cast, especially Cusack and Malkovich. You can sense the gifted acted gave himself over to his Director and the script in every way, ending up with one of his best performances.

I know, it is a horror film but the performance Cusack gives, the genuine terror and fear is unsettling and draws us into this paralyzingly film. As a writer investigating haunted hotels and ghost stories, he decides to spend the night in a wildly famous New York hotel. The manager tries to discourage him, but he is steadfast, and the moment he enters the room, the door closes and We the audience feel the room closing in. All hell breaks loose as the room brings about all sorts of horrors, and Cusack’s reactions are galvanizing. Rare that so fine a performance comes in horror.