10 Best Divorce Movies of All Time

It is said to be like a death, the end of a marriage impacting a family like a terrible loss. Divorces with children can be terrible, often subjecting the kids to a virtual war zone before it finally ends. They are left with lingering questions about their part in it, who loves them, who do they love, the pain they endure can often last their entire lives. Sometimes spouses can be friends, even support each other in their new lives. Sometimes the move from love to hate is so great they can barely look at one another. Each is galvanized somehow by the experience, and moving forward, one hopes they at least learn from it all.

What brings about divorce? The obvious, cheating, abuse, terrible events within the home, or perhaps over time they just fall out of love with one another. Cinema has brought all of them to the screen, here are what I believe to be the ten best. Here is the list of top divorce movies ever. You can watch some of these best divorce movies on Netflix. Some of these movies are not just about divorce but also about reconciliation and getting back together.

Note: I should have included A Separation (2011) but did not because I do not understand the divorce laws in Iran and was concerned I would say something stupid. The film is a powerful study of a marriage ending and the staggering emotional impact it has on all. Again, my ignorance of the laws in Iran are the only thing that keep the film from my list, I did not wish to offend anyone. 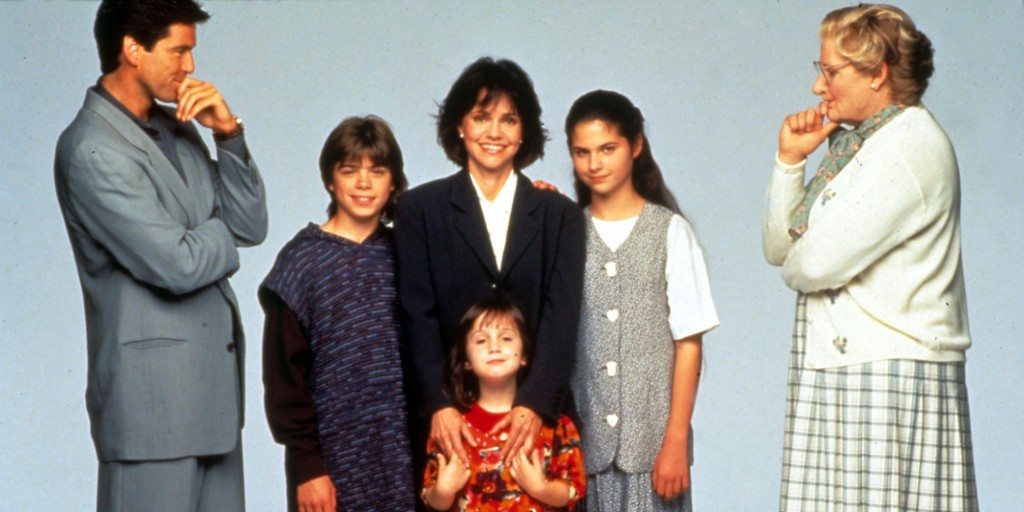 I had to include at least one genuine comedy here, because as much as we laugh at the film or are moved by the depth of love, the final monologue about children dealing with divorce has undeniable power. Robin Williams is a goofy voice over artist, married to uptight and conservative Sally Field, who grows tired of his child like ways and kicks him out asking for a divorce. It is not that she does not love her husband, she does not care to be married to a grown child any longer. Knowing he needs to see his kids everyday he impersonates an older lady, the title character, where he can also keep an eye of his wife and any suitors. Williams is excellent, especially as Doubtfire, especially the restaurant scene where it all falls apart. People often forget the love father can have for their children, we see it here, beautifully portrayed by the late, great Williams. 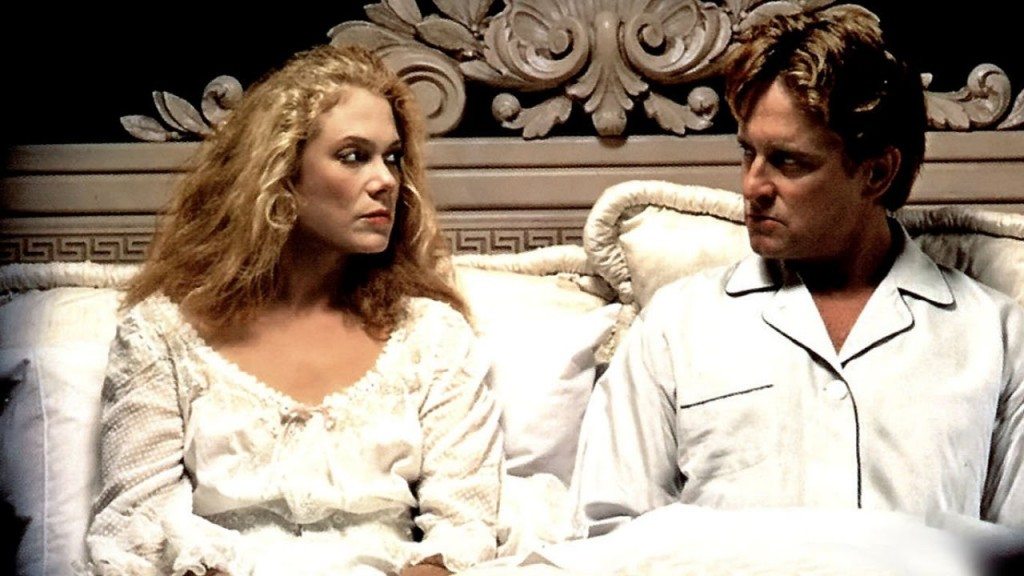 A vicious, uncompromising black comedy that is dark to its very soul, remains black right to the final frame of the picture. Directed with brash confidence by Danny DeVito, Michael Douglas and Kathleen Turner are a long married couple who met, fell in love, married, had kids, bought a beautiful home which she renovated and made perfect, and now with the kids gone, she comes to the realization, she despises everything about him. Granted he is a smarmy, wealthy ass, and when she announces her feeling, cold cocking he m with a punch to his face, all hell breaks loose. Stupidly they remain in the home together, each refusing to give an inch, war each and every day, until it becomes physical, nasty and fatal. Douglas and Turner are having a grand old time obviously, but anyone who went through a nasty divorce might struggle with the darkness of the subject. Is it an exaggeration, maybe, but it is a superb black comedy with courage enough to go all the way. 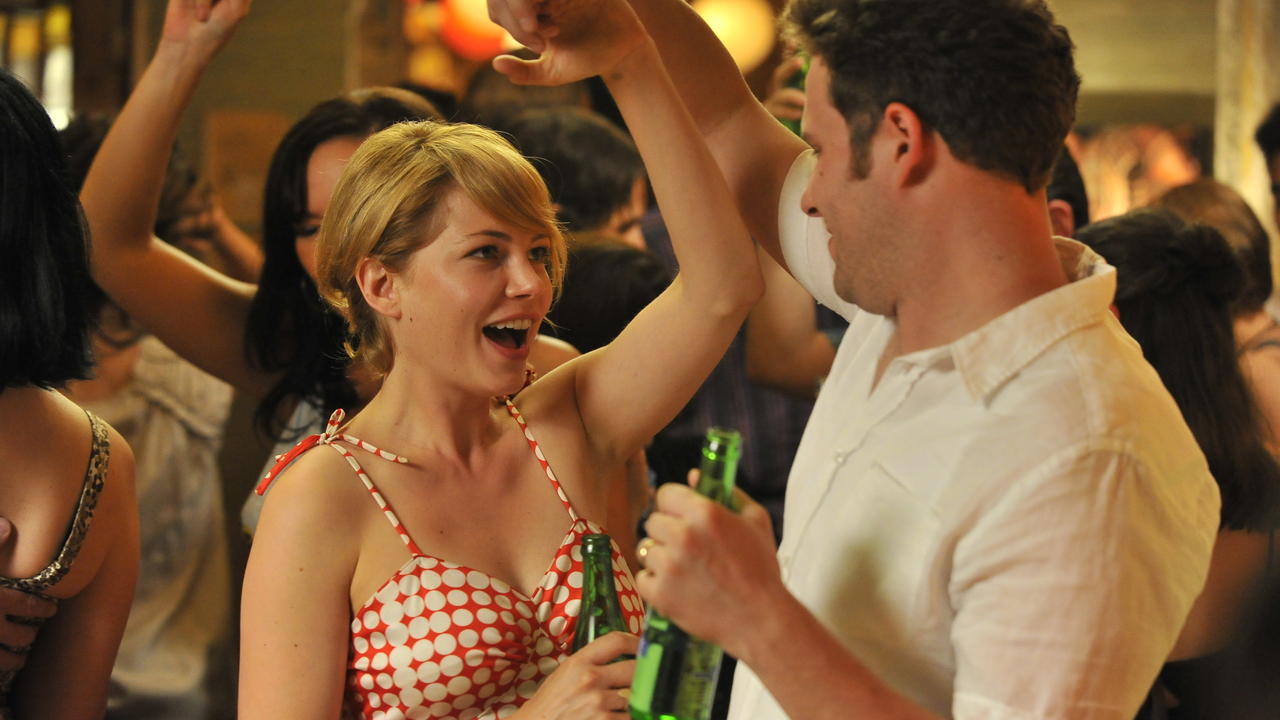 Another really fine film that is just as uncomfortable as it is outstanding, and rather braves in the sense the leading actress is willing to go as far as she did in the role, it is she who cheats. Michelle Williams is superb as a young writer who meets an attractive young man while working on the East Coast and upon returning to Toronto realizes he lives across the street. Though married to a writer of cook books, nicely portrayed by a Seth Rogen, she embarks on a cautious friendship with the other man, that becomes an affair, that becomes enough to leave her marriage. Sadly we can feel the spark is gone from her marriage, but does she need to humiliate her husband in this manner? This gives the film an edge because there is the slightest contempt for her, just tell the man. Many, both men, mostly men and women do. Sarah Polley both directed and wrote the film, another fine work from this most gifted actress turned filmmaker. 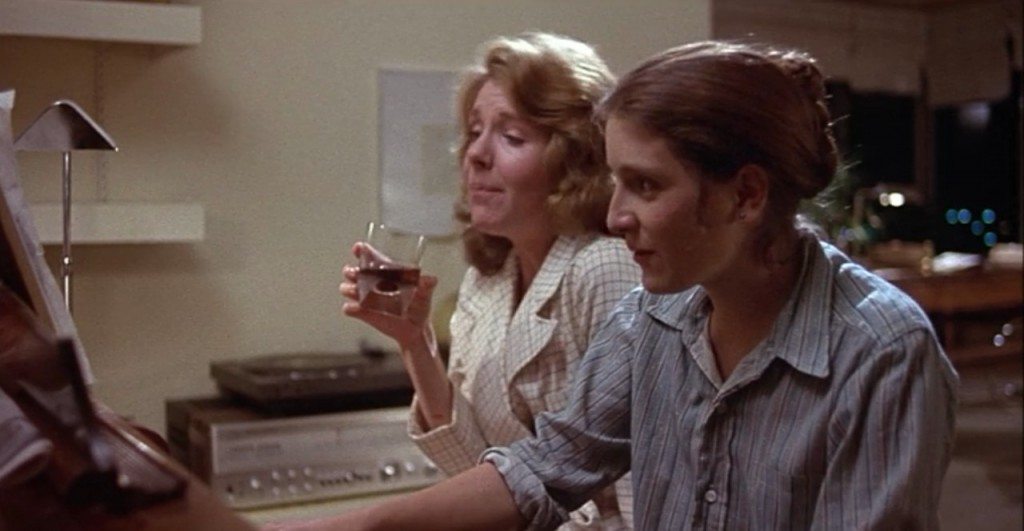 Erica (Jill Clayburgh) is a modern New York woman, mother, wife, happily working at an art gallery seemingly fulfilled. They have a beautiful apartment in Manhattan, a wise ass teen daughter, and a happy marriage. Her life is complete and perfect, or so she thinks. Her husband takes her to lunch one day and while walking her back, falls apart on the street, sobbing to her he has had an affair and fallen in love. Stunned, her entire world shattered, reeling in grief and sadness she attempts to put her life back together and in doing so finds herself and realizes she does not need a man to complete her, she never did. Clayburgh gives one of the defining performances for women, for actors in the seventies, while director Paul Mazursky gave us one of the best films of the decade. 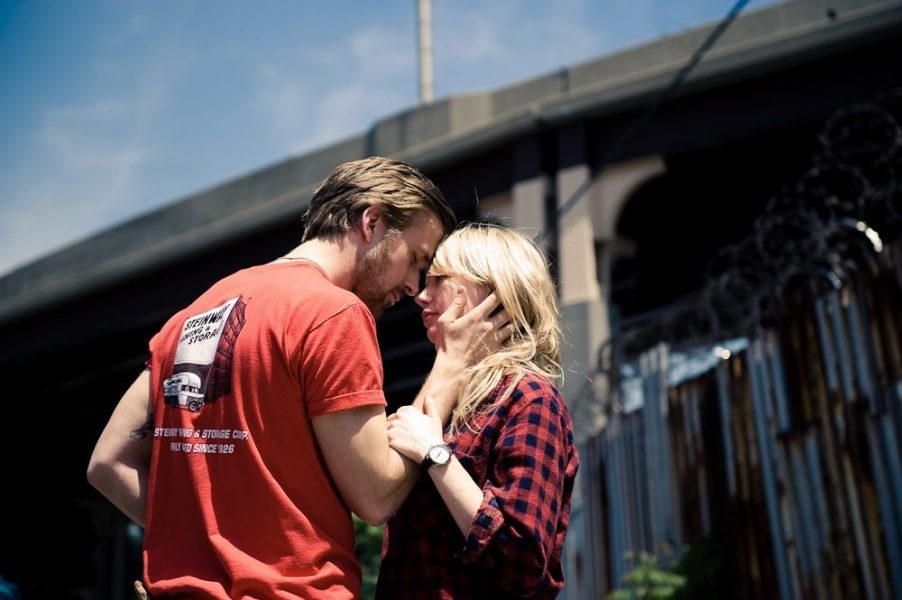 Though a fine, unflinchingly honest film about the beginnings (shown in flashback) and end of a marriage, the film is so raw, so up close and personal it is often uncomfortable to watch it all far apart. Ryan Gosling and Michelle Williams meet as teens, he is perhaps a little older, out of high school, where she is an excellent student. They meet, they fall in love, they have sex, often, and she becomes pregnant, so they marry. Their child holds them together but we can feel the unbearable tension in their home each day. He is unmotivated, enjoys painting houses and being able to drink a lot while watching the little girl, while she works as a nurse in a busy doctors office. Seething that he will not do more with his life she can barely look at him. When the decision comes to part, clearly it rips them open wounds, but just as clearly, she is not in love with him anymore. Tough stuff to be sure, acted with purity by the actors, the sort we rarely see. 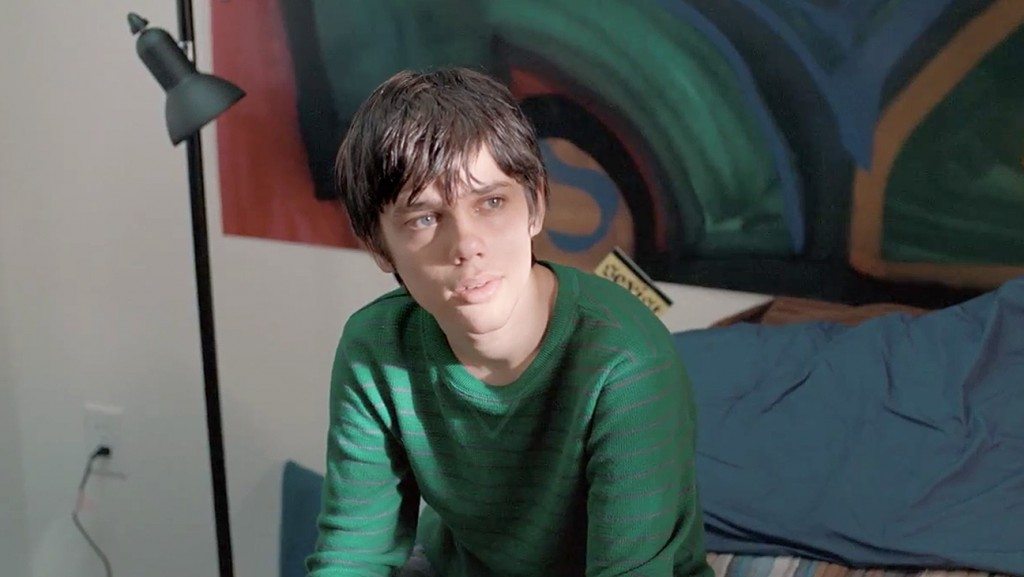 One of the most acclaimed films of the decade director-writer Richard Linklater found his way to the Oscar race with this innovative film that was made over a twelve year period. The film explores the pain of divorce for all involved but also the very clear reasons why. Ethan Hawke is at his very best as the irresponsible husband and father who is forever a child, and sadly knows it. Miss Arquette is simply a revelation as the wife and mother who essentially raises the child on her own, and to his credit and to her immense surprise Hawke admits this giving her complete credit. Very much a slice of life drama, as real as it gets, virtually documentary without being one. 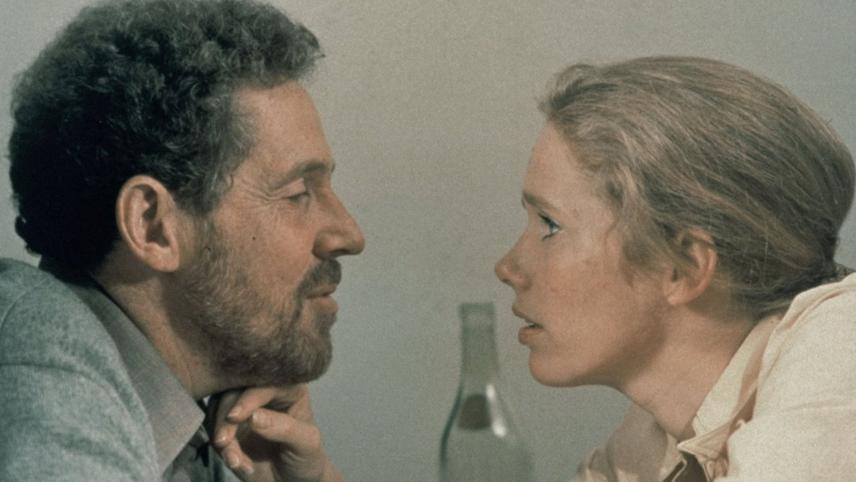 The great Ingmar Bergman directed and wrote this Swedish film, condensed from an epic TV show which featured the story of a married couple who experience their marriage unravelling. The film was a major hit in America where actress Liv Ullman had become something of an icon. She is luminous in the film, as she always was under the direction of Bergman, as she was his muse in other work such as Persona (1970), Cries and Whispers (1972) and best of all Face to Face (1976). Here we see the slow dissolution of a union once filled with love and caring. It all just sort of stops and no one really knows why. I have not seen it for years, and dot own a copy, but I remember the impact of seeing the picture at a rep house in the seventies. Painfully Bergman, and brilliant. 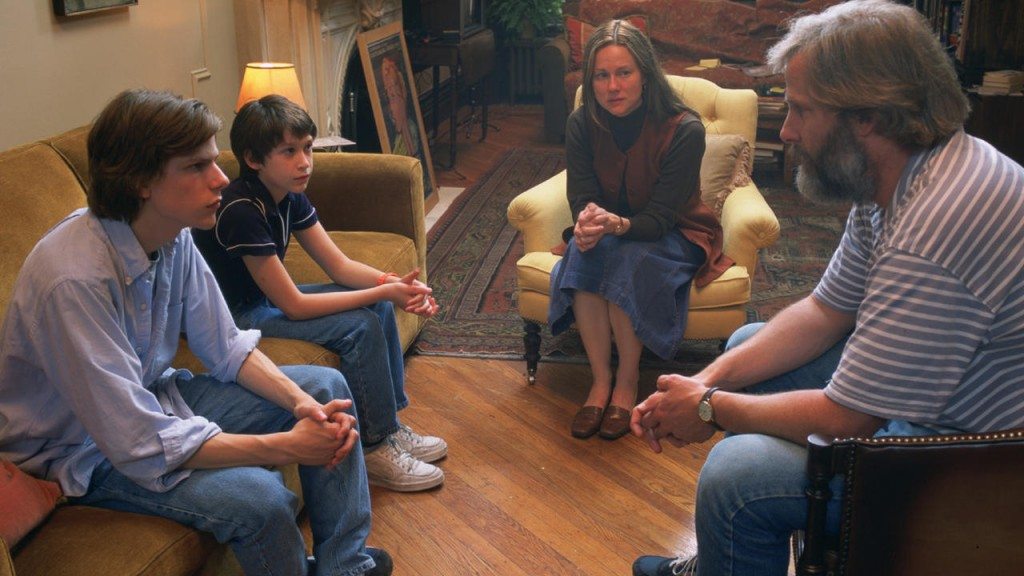 Again a beautifully written and acted picture with performances from two fine actors, though nothing prepared me for the level of excellence of the work. Jeff Daniels has always been a reliable character actor who as the second or third lead gets the job done. Here as the lead, a wounded intellectual struggling with what is happening he is simply sublime, doing the best work of his career. How he was passed over for an Oscar nomination I will never understand. As his estranged wife, Laura Linney, is equally superb, though the less likeable of the two, perhaps because she is colder which is a bold move on the part of the actress. Caught in the middle are their sons, the eldest portrayed by Jesse Eisenberg, divided on which parent to support, though hating the fact his mother is seeing a younger man. Beautifully written and guided by Noah Baumbach with a confident, yet gentle hand, he knows his actors are doing exceptional work, and thus leaves them alone to do it. 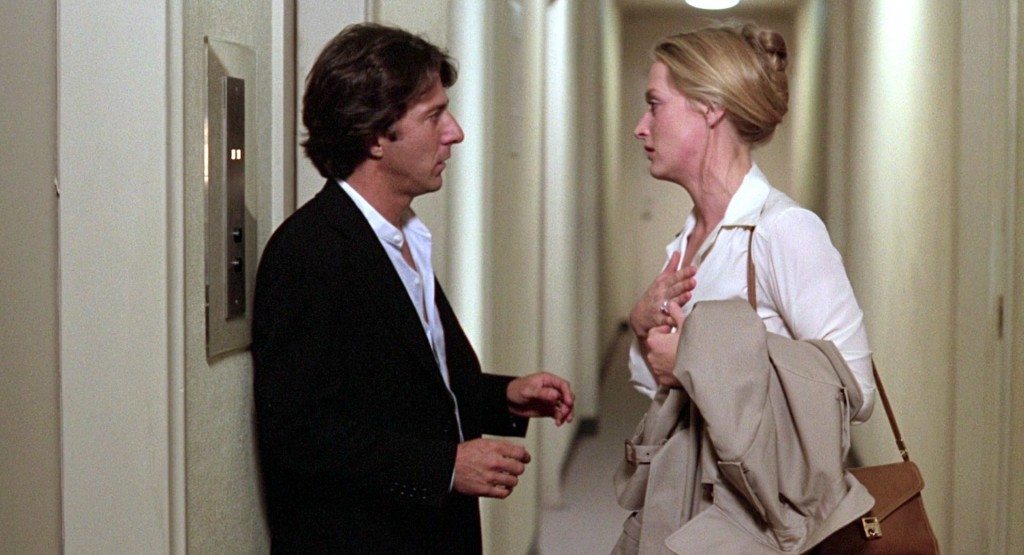 Generally considered the best of divorce drama, the two films, this and the former, could easily tie or change places, each is that good. Robert Benton’s brilliant, biting, often heartbreaking drama won five Academy Awards including Best Picture, Best Director, Best Actor (Dustin Hoffman), Best Supporting Actress (Meryl Streep), and Best Screenplay Adaptation, besting among other films Francis Ford Coppola’s masterpiece Apocalypse Now (1979). Returning home from a day’s work, Ted (Hoffman) is told by his bags packed wife she is leaving. Bordering on a breakdown, she coldly leaves leaving him with a son he barely knows. But they build a life, they forge a bond, a deep love that is threatened when she comes back a year and a half later wanting custody. Benton in a stunning act of trust, allowed his actors to write elements of the screenplay and being gifted actors each delivered. Hoffman is superb as a father learning for the first time to be one, while Streep, easily painted the villain is a woman who lost herself and now found she has the tools t be a mother. Each is remarkable. Justin Henry is exceptional as the little boy Billy. 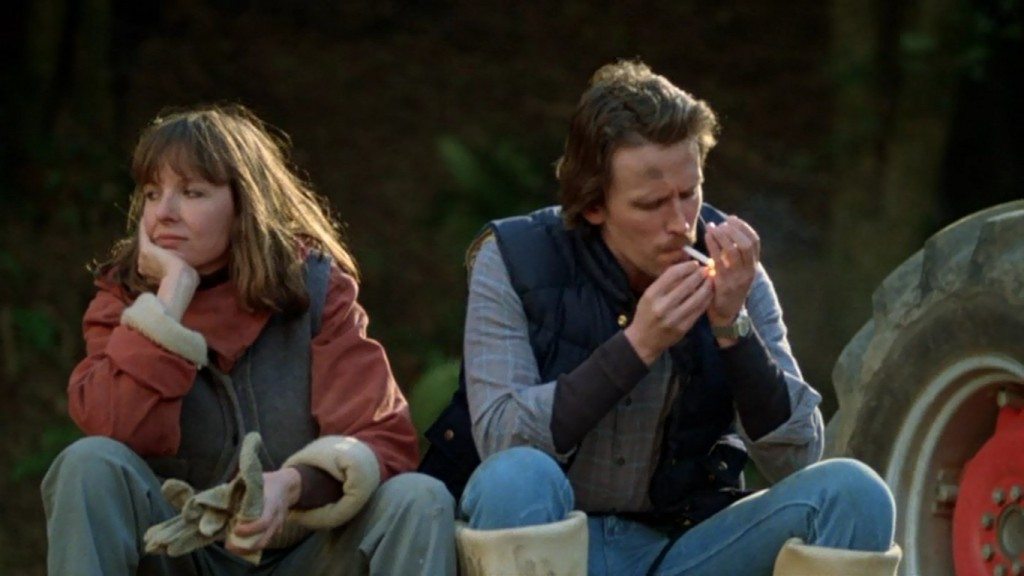 Perhaps a surprise at the top of the list, but I have not ever seen a more powerful, nor more raw and visceral emotional film about divorce than this. Directed with great sensitivity and force by Alan Parker the film deals with George (Albert Finley) leaving his wife Faith (Diane Keaton) and girls after a an affair with a young woman who makes no bones that he is disposable to her. The grief of their parting is etched in the faces of George and Faith, who appear to move on yet remain connected by a life and their children. Dana Hill is superb as the enraged eldest girl who lashes out at her father in hatred that is really disappointment, their love for one another so deep. Alan Parker directed to of the best performances of the year with Finney and Keaton, each deserving of Oscar nominations that never came. The first time we encounter George he is sobbing in a room alone, tormented by cheating on his wife, agonized over leaving his children. Keaton has a haunting, painful scene smoking a joint in a bathtub where she sings, in a breaking voice, the Beatles tune “If I Fell”. They remain connected by their children but by something deeper neither realizes until the end, their unbreakable love for one another. A heartfelt silent scream of pain…brilliant.