20 Best Holocaust Movies of All Time

History bears testimony to the fact that humanity has often been subdued by the ruthless whims of tyrants! People have been slaughtered, freedom has been curtailed and liberty has been executed. Notwithstanding, the spirit of mankind has kept the flame burning and allowed humanity to fight for its soul. However, there is one episode that scarred human existence like nothing before and left a permanent dent on our collective conscience. It is the Nazi propagation of Aryan supremacy and the resultant anti-Semitism that shook the world. Adolf Hitler and his bunch of sadist goons are accounted for the killing of nearly six million Jews across Europe.

While historians have documented the horrifying statistics and authors have inked the brave tales, it is the films on Holocaust that have, time and again, wrenched the hearts of people. They act as the reminders of one of the darkest times in history, demanding us to never forget what happened then, and asking us to not allow something like that to transpire ever again. Of a plethora of films that have been made on the subject, we have narrowed down the list to the best ones. You can watch some of these Holocaust movies on Netflix, Hulu or Amazon Prime. 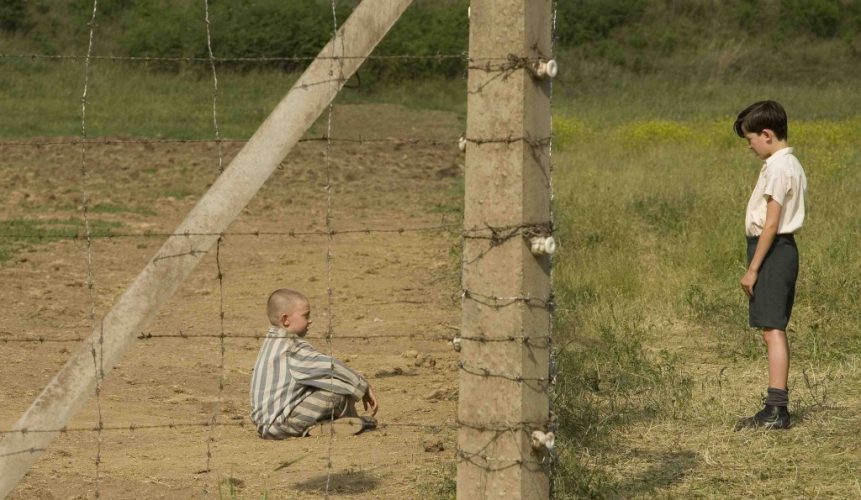 Although some critics panned Mark Herman’s British venture, ‘The Boy in the Striped Pajamas’, for overt commercialism and alleged departure from reality, it is undeniable that the movie is an important human document narrating the horrors of the Holocaust. The film tries to explore the brutalities of a Nazi Extermination Camp through the eyes of two 9-year-old children, one being the son of the camp’s commandant and the other a Jewish camp inmate. The movie is based on a novel of the same name by Irish author John Boyne. 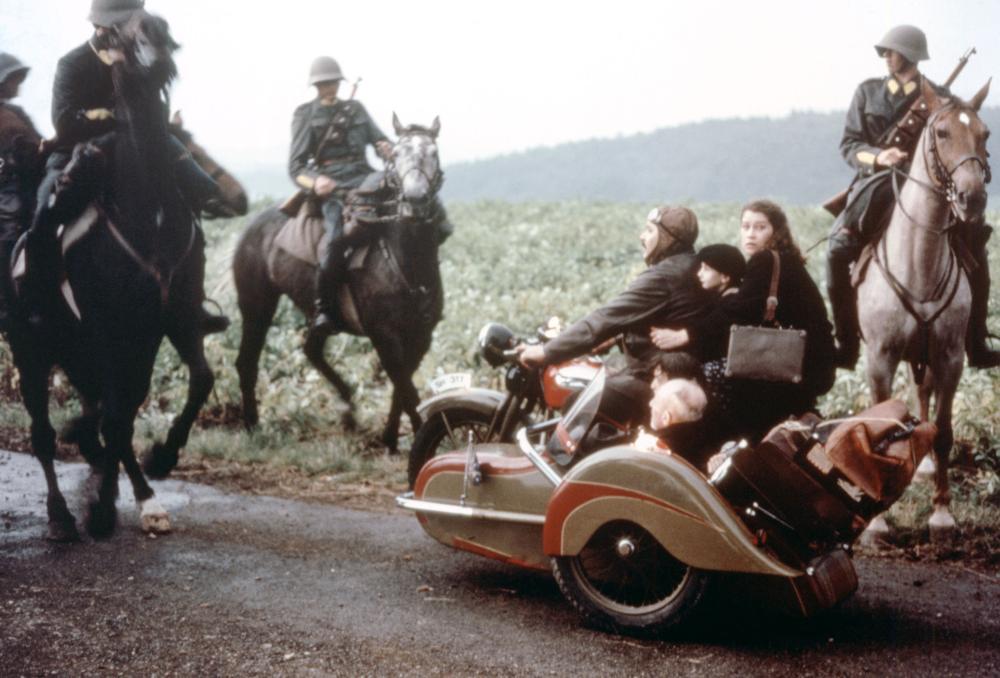 While all of Europe plunged itself into a devastating war, there was one country that wanted nothing to do with it. Switzerland closed itself from whatever its neighbours were fighting over and remained silent and unattached even in its aftermath. While it prizes itself for saving its people from the horrors of war, it isn’t completely blameless when it comes to sharing the blame on the death of humanity. ‘The Boat is Full’ is set in Switzerland and tells the story of six illegal immigrants who enter Swiss borders in the hopes of starting their lives anew. But the new country doesn’t allow them to be at peace. 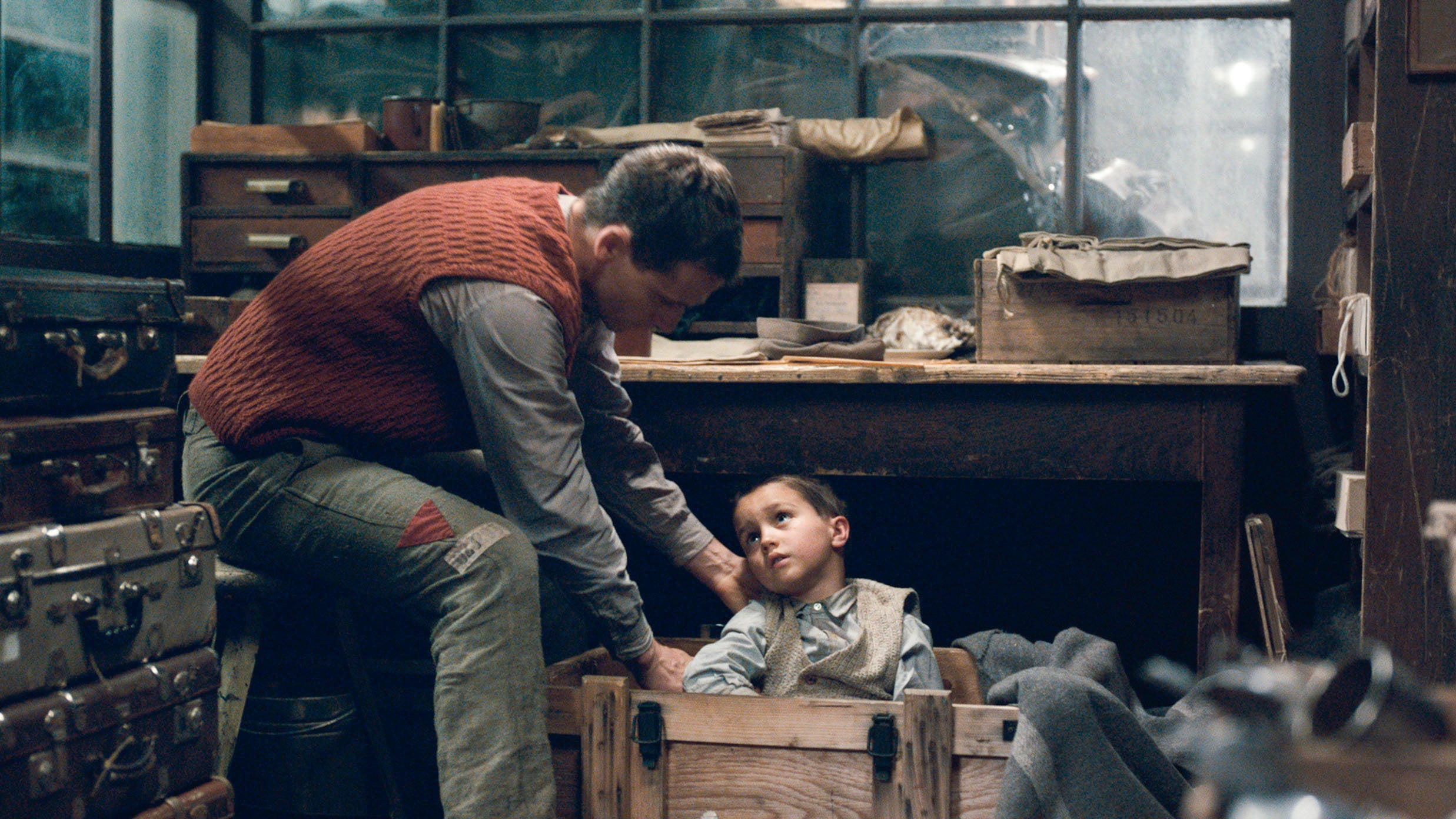 Based on the book of the same name by Bruno Apitz, this German drama is set in the Buchenwald concentration camp. The prisoners of the camp rescue a young boy from a Polish ghetto and hide him amongst themselves. They are perfectly aware of the fate that awaits them if the soldiers find out about it. But more than what happens to them, they are concerned about the execution of the innocent life. 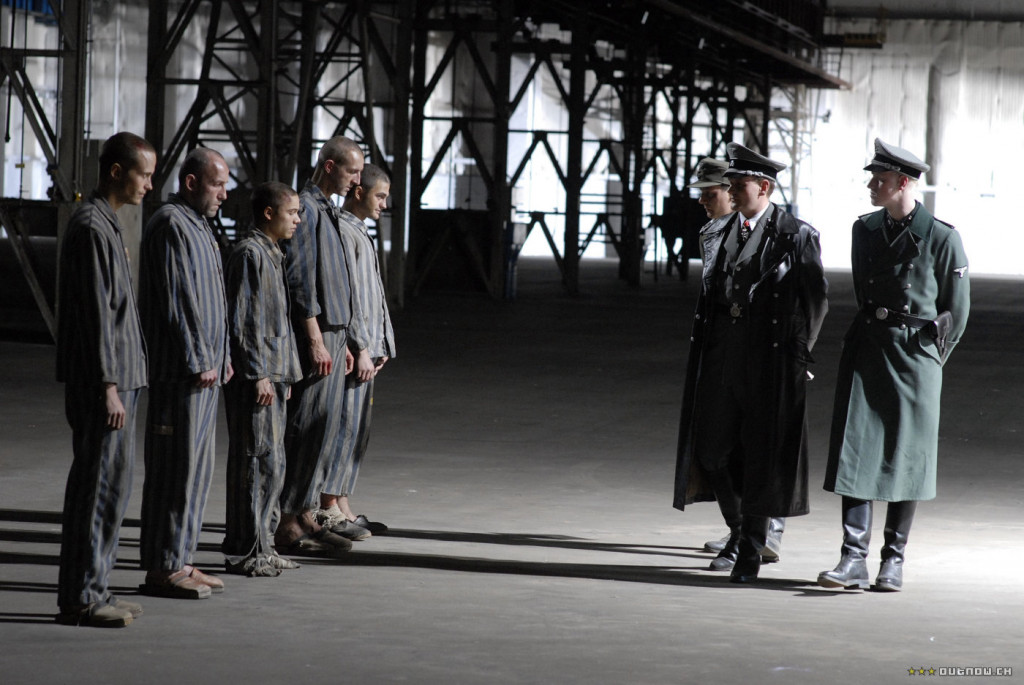 The winner of Academy Award for Best Foreign Language Film in 2007, ‘The Counterfeiters’ is based on the life of a man called Adolf Burger. He would forge documents for fellow Jews to save them from deportation. When caught by the police, he is sent to the Sachsenhausen concentration camp. Owing to his unique talent, the Nazis force him to forge the British currency. Their plan is to flood Britain with this fake currency, toppling its economy in the process. 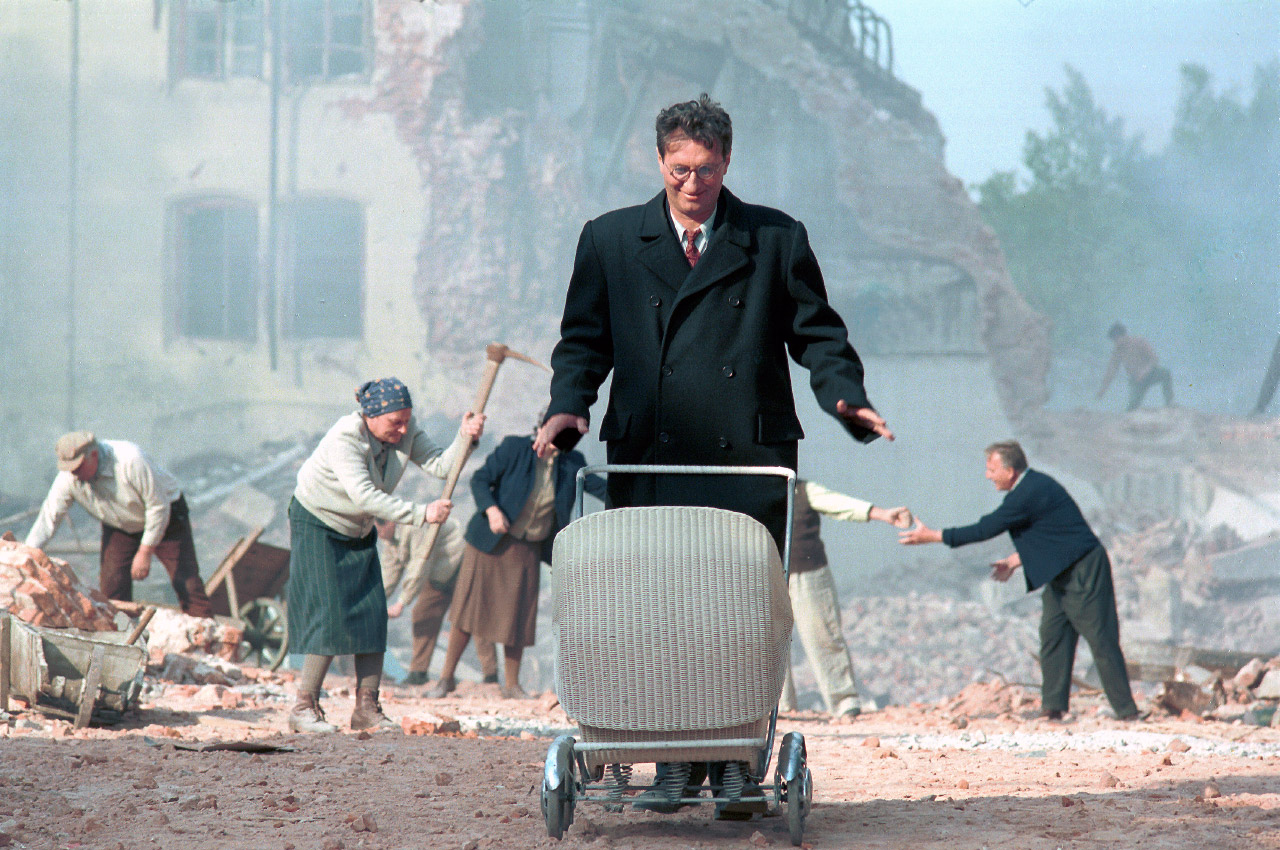 This Academy Award-nominated film follows the story of a Czech couple who reluctantly allow a young Jewish man to find refuge in their house after he escapes from a concentration camp. The tension in the house is heightened with their own marital problems as well as the frequent visits of a Nazi co-worker who has grown suspicious of them. 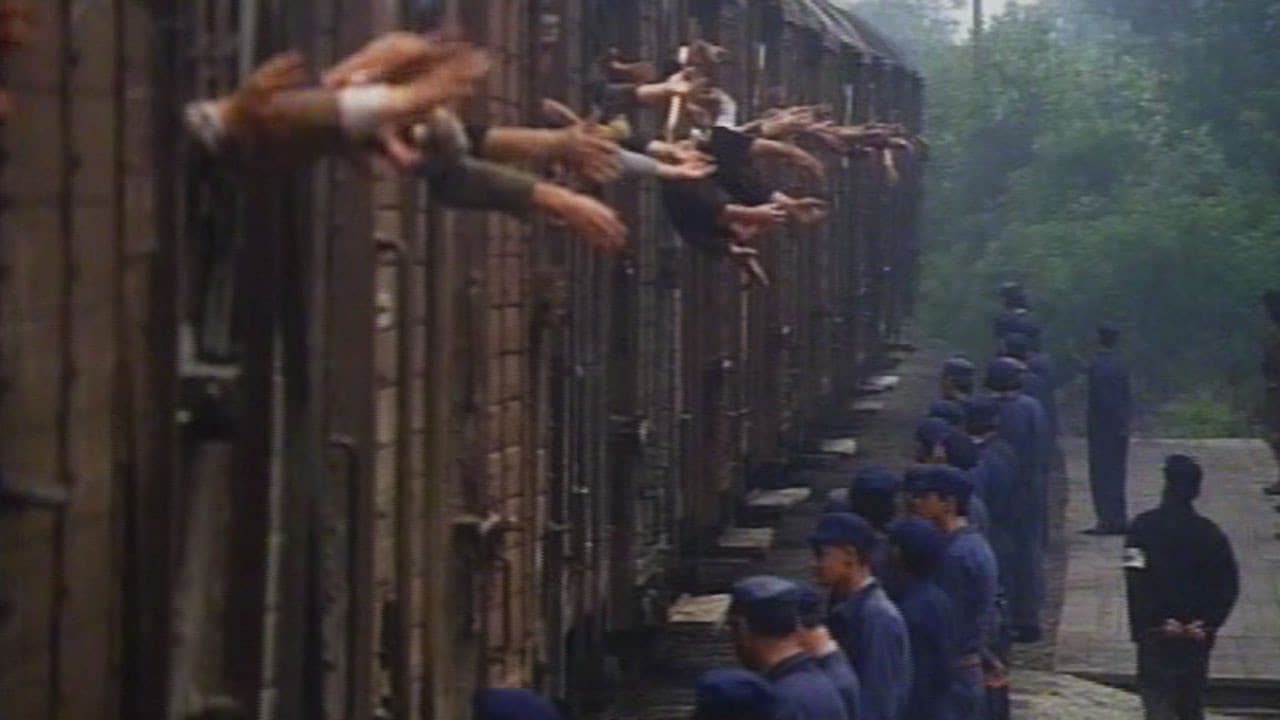 ‘Escape from Sobibor’ is a Golden Globe-winning film that is based on the mass escape of Jewish prisoners from Sobibor concentration camp. When Jews are brought to the camp, they are asked to choose their particular trades. Those left with nothing to contribute are killed in gas chambers. When the prisoners realise that they are in a death camp and that they will inevitably meet the same end once they stop being useful, they plan an escape. Leon Feldhendler rises to the occasion and devises an ingenious plan to save all 600 of them. 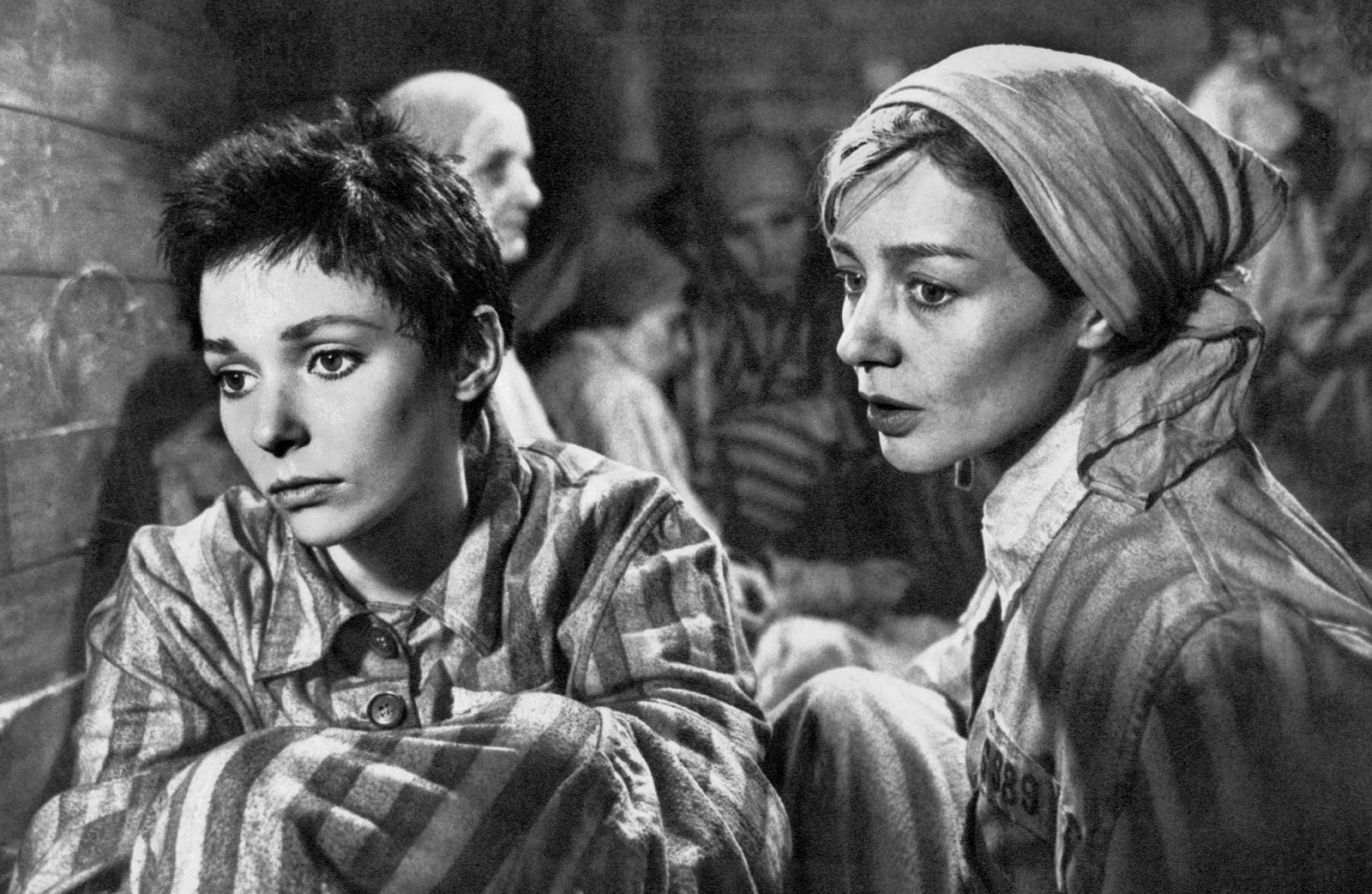 When faced with an impossible situation, a person will do anything to survive. ‘Kapo’ tells one such story of survival. At the centre of this Academy Award-nominated movie, is a 14-year-old girl named Edith. Her parents perish in the concentration camps, but she survives with the help of the camp doctor. She assumes the identity of a non-Jewish girl and goes through a rigorous series of trials to ensure her safety. She is faced with a difficult choice when it comes to saving other prisoners and continuing her relatively safer life. 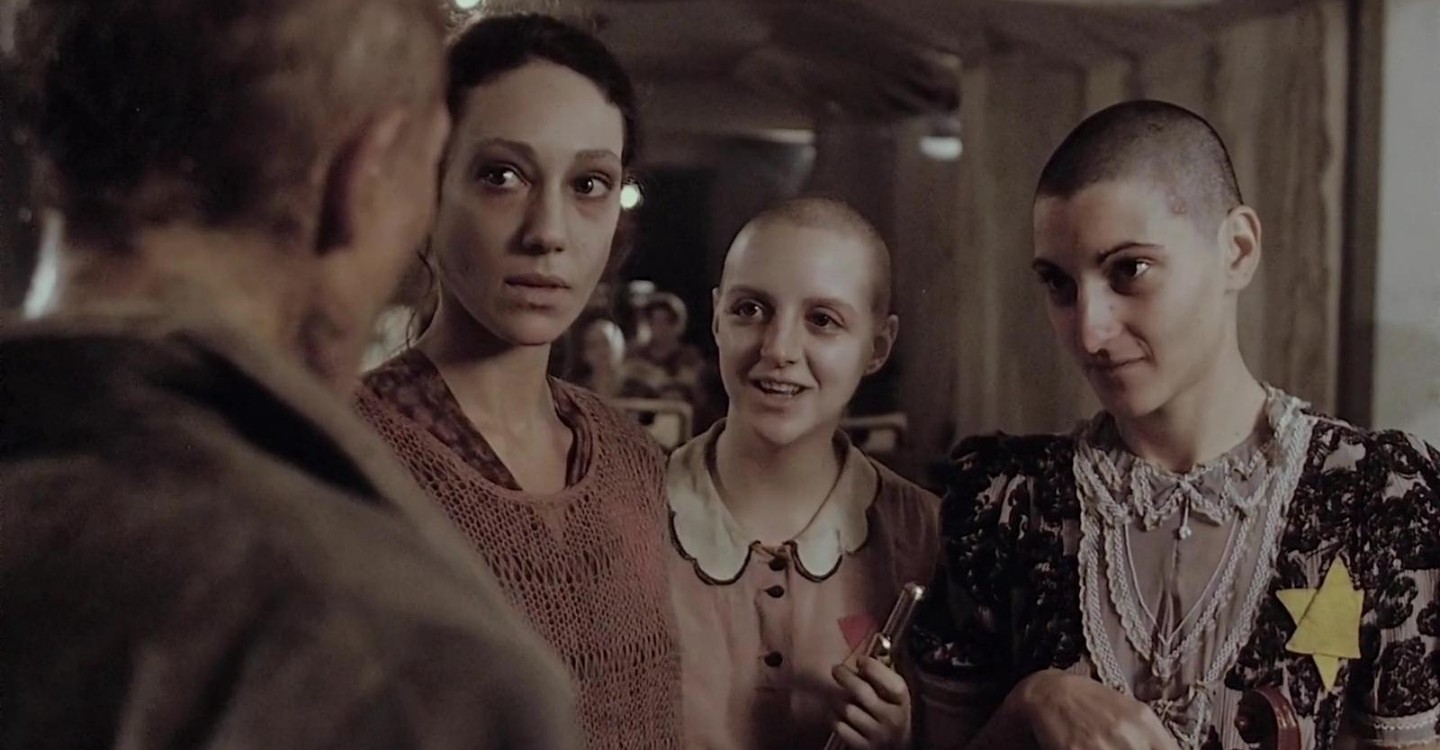 Fania Fenelon was a famous French singer. Because of being Jewish, she was sent to the concentration camps. ‘Playing for Time’ is the story of her time in Auschwitz. When recognized as the famous musician, Fania is allowed to join a group of the female orchestra that plays for the Nazis. The members of the orchestra are treated better than other prisoners. However, playing for their oppressors makes them wonder if this safety is worth their dignity. 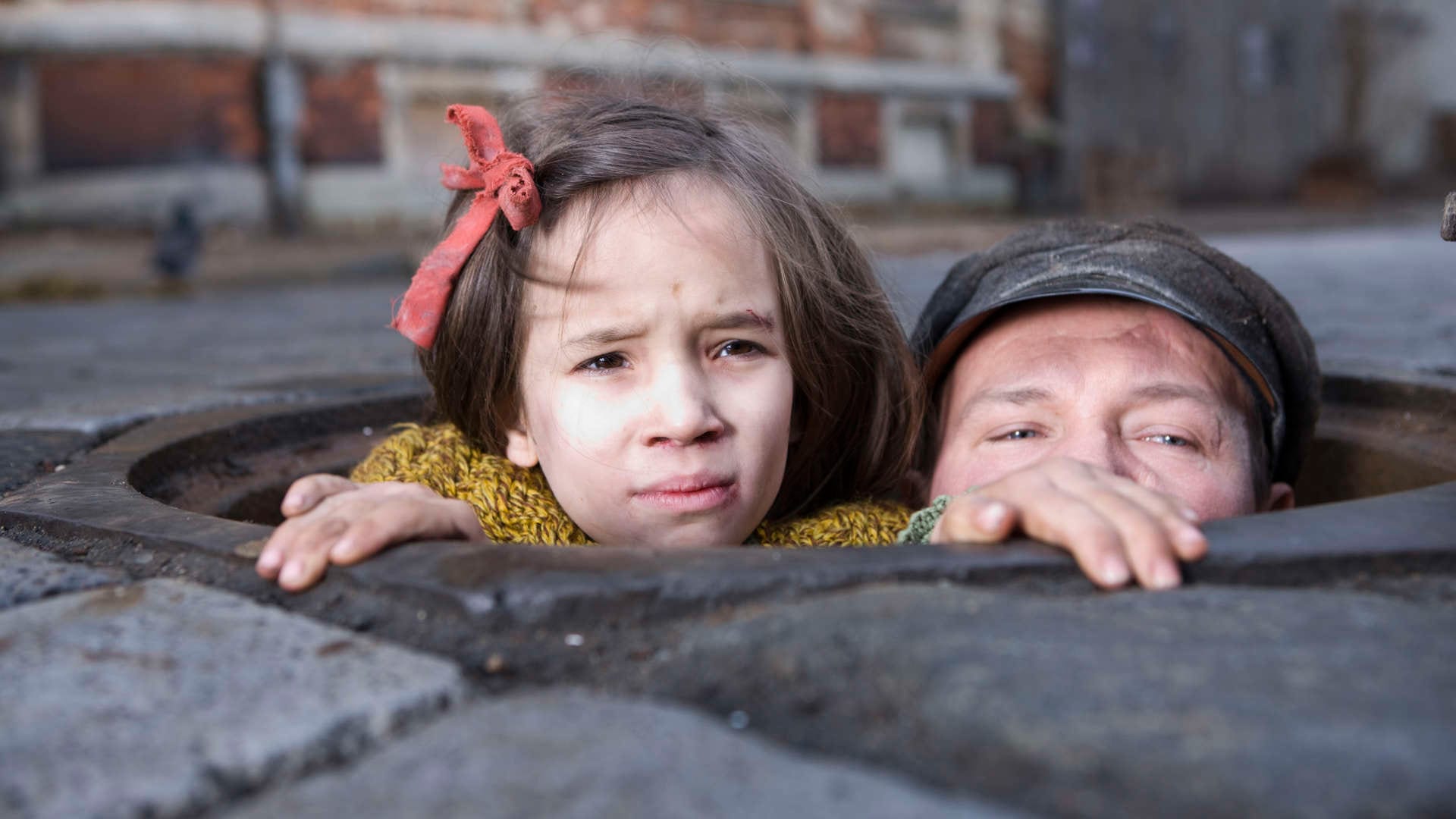 This Academy Award-nominated film follows the story of a man named Leopold Socha, a Polish Catholic working as a sewage inspector in German-occupied Lwow. One day, he discovers a group of Polish Jews hiding in the sewers to escape execution in the camps. Instead of reporting them, Socha decides to capitalise on this opportunity. He demands payment from them to keep them hidden. While the Jews agree to the deal, they wonder what happens when they run out of money. 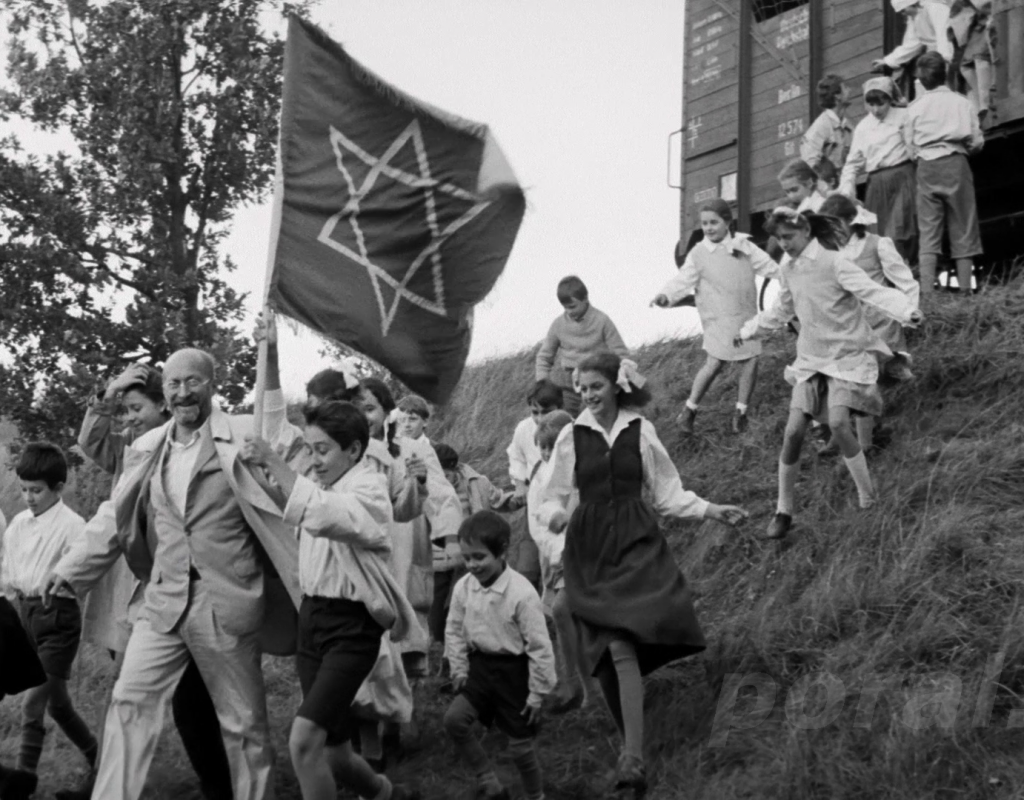 When brought to the camps, the children were the first to be gassed, along with old and sick people. Janusz Korczak was a paediatrician in Warsaw who came up with an idea to save as many children as he could from this dark fate. He opened an orphanage in an abandoned school and housed the children whose parents had been sent to the camps or were killed. As the numbers slowly rose in the orphanage, Korczak prayed for the Nazis to show mercy to them, if it ever came to that. A movie that features violent if not disastrous emotional undercurrents, Allan J. Pakula’s master cinematic venture ‘Sophie’s Choice’, based on a novel of the same name by William Styron, could be aptly categorized as a voyage through the alleys of guilt, remorse, violence and morbidity. The film chronicles the relationship between three unique characters – a poet, a Holocaust survivor and a schizophrenic. Critics have since dubbed it as one of the most authoritative works on the impact of Nazism. It was nominated for five Academy Awards in 1983. Meryl Streep managed to clinch the award in the Best Actress category. A unique yet beautiful film on the horrors of the Holocaust, Roberto Benigni’s Italian endeavour ‘Life Is Beautiful’ is sad and funny at the same time. It features a liberal librarian trying to protect his son from the obvious dangers at a German concentration camp. The movie was at once hailed and lambasted upon release. It was appreciated for amazingly capturing the essence of endangered humanity better than many other films on the same subject and criticized for making fun of an issue that is intrinsically grim. The movie walked away with two Academy Awards in 1999, one in the category of Best Foreign Language Film and the other in the category of Best Actor for Benigni himself. 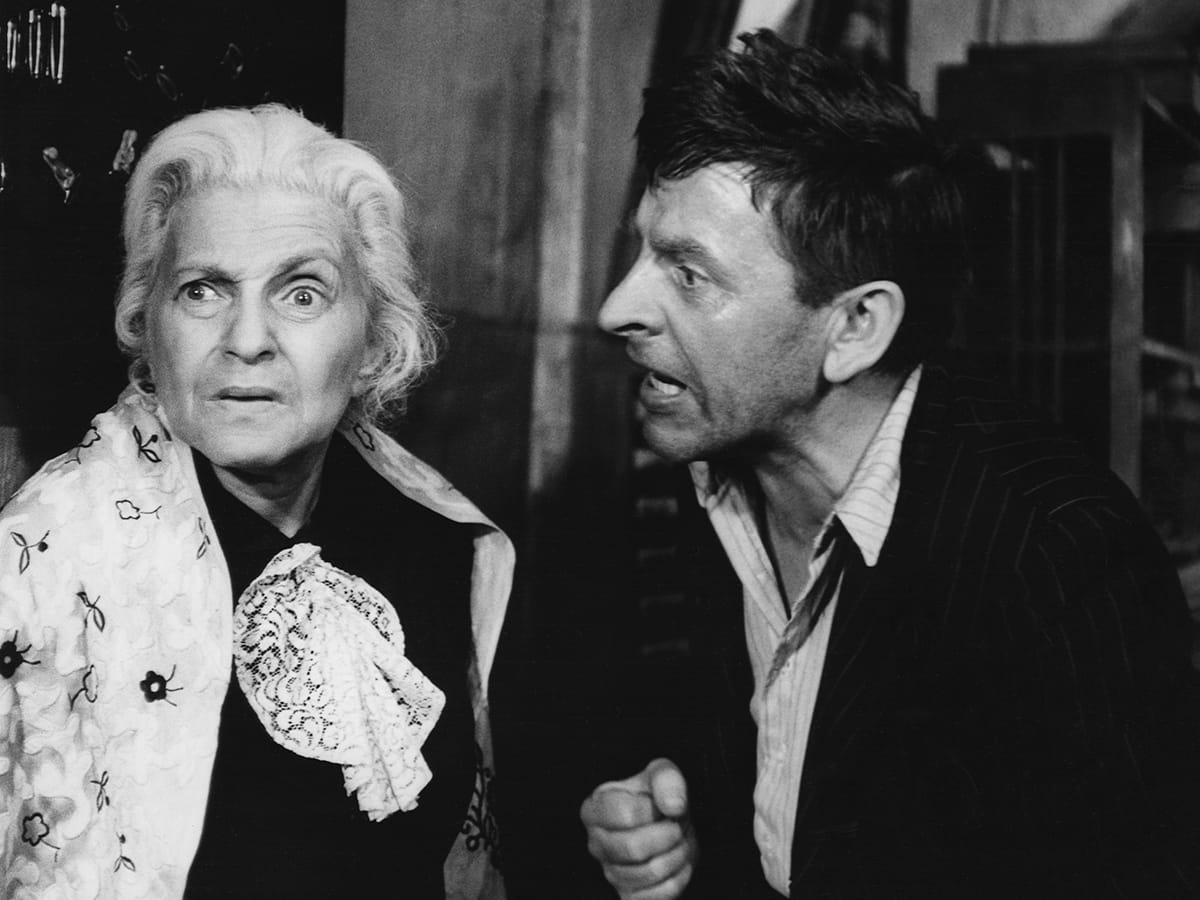 The Nazis didn’t bring about the horrors of the Holocaust in a day. They began with small steps that eventually led to the act that would forever be a blemish on humanity. One of the first things they did was the Aryanization programme, under which they would seize the property and business of Jewish residents and hand it over to a non-Jew. ‘The Shop on Main Street’ follows one such story. This Academy Award-winning movie starts with Anton Brtko, who is sent to take over the shop of a Jewish woman. Louis Malle’s critically appreciated autobiographical movie ‘Au Revoir Les Enfants’ narrates the story of a Catholic boarding school in occupied France during the Second World War and its raid by the Gestapo to catch hold of three hiding Jewish students. The film is based on the childhood events of Malle and was massively praised for its portrayal of humanism and realism. The movie rightfully clinched the Golden Lion Award at the Venice Film Festival in 1987. A movie that unfailingly generates extreme horror, Hungarian auteur László Nemes’ ‘Son of Saul’ unleashes the dirty beast within human beings like nothing before. The film follows a Jewish Sonderkommando’s attempt to salvage the dead body of a boy gassed at a Nazi Extermination Camp. The critics were almost unanimous in appreciating this unique Holocaust movie that clinched the Academy Award for Best Foreign Language Film in 2016. It also won the Grand Prix at the Cannes Film Festival in 2015. Soviet filmmaker Elem Klimov’s ‘Come and See’ is a movie that has inspired generations since its release. Critically appreciated, the film was made with the background being the Nazi occupation of the Belorussian SSR. It chronicles the story of a boy who joins the Soviet resistance against the Nazis and experiences the horrors of the Second World War. The film, which became a box-office success, is now considered to be one of the finest war movies ever made. Agnieszka Holland’s German Holocaust saga ‘Europa Europa’ is a filmgoer’s delight. It features the story of a German Jew who manages to avoid the horrors of the Nazi rule by successfully pretending to be a non-Jew. The film is based on the autobiography of Solomon Perel. The movie was universally acclaimed upon release and was considered to be a strong contender for the Academy Award for Best Foreign Language Film. However, Germany didn’t submit the film for the awards. A historical film based on the life of Polish Jewish pianist Władysław Szpilman, Roman Polanski’s ‘The Pianist’ is an enigmatic survival tale set during the Nazi occupation of Poland. Based on an autobiographical book of the same name by Szpilman, the movie was able to shake the collective conscience of many cinephiles. The film received almost unanimous accolades. Adrien Brody, who enacted the role of Szpilman in the movie, became the youngest ever to bag the Academy Award for Best Actor for his stellar performance in 2003. The movie also won two other Academy Awards, those in the categories of Best Director for Polanski and Best Adapted Screenplay for Ronald Harwood. Probably the most refined piece of work from the stables of Steven Spielberg, ‘Schindler’s List’ could be categorized as more of a historical document than just a film. Chronicling the unique story of renowned German businessman Oskar Schindler, who practically put his head on the line to save his Jewish workers from Nazi persecution, the movie has acquired an iconic status over the years. Arguably the finest Holocaust movie of all time, it managed to bag seven Academy Awards out of a total nomination of twelve. An astounding piece of work by French filmmaker Claude Lanzmann, ‘Shoah’ presents the Nazi misrule in Poland better than any of its peers. Featuring a large number of interviews by witnesses, survivors and perpetrators; the movie recreates the horrors of the Holocaust rather cleverly. Secret cameras were used for shooting parts of the film. The film was highly applauded but also received equal criticism for being partial against the Polish people. Still, it is ranked as one of the most authentic cinematic documents on the Holocaust.