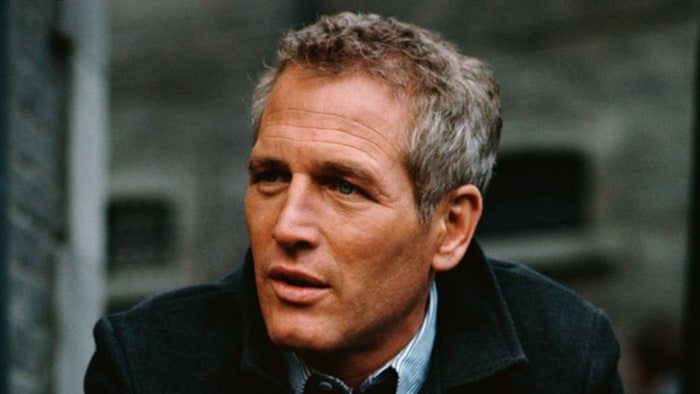 Every film you have not seen is a new film, which is why young film buffs need to go back before the year they were born and seek out the work of the greats during the forties, fifties, sixties, seventies and eighties. There you will find waiting for you many great films, great performances, legends who for a time walked as kings.

Such an actor was the great Paul Newman!

Old blue eyes they called him for his piercing, startling baby blues. Blessed with good looks, remarkable talent and intelligence, he would spend fifty years in the business becoming one of the greatest actors in film, a strong and talented director, and philanthropist who made hundreds of millions for the charities he supported.

Newman was both great actor and movie star, as comfortable in a low-budget film as he was in a blockbuster. He was fearless in his choice of roles, and often portrayed a full-out bastard, unrepentant in his actions, not concerned with the consequences. His first film in Hollywood saw him woefully miscast in a period piece, ‘The Silver Chalice’ (1953), and he left, ran back to New York and the Actors Studio where he worked on his craft and found his way back to Broadway. Eventually he came back to Hollywood where he replaced James Dean in a couple of films, and then earned his first Oscar nomination for ‘Cat on a Hot Tin Roof’ (1958), giving a fine performance as Brick.

When Brando faltered and fell out of favor in the sixties it was Newman who picked up his torch as the greatest young actor, and ran with it with a remarkable run of brilliant work in the sixties including ‘The Hustler’ (1961), ‘Sweet Bird of Youth’ (1962), ‘Hud’ (1963), ‘Hombre’ (1964), ‘Cool Hand Luke’ (1967), and ‘Butch Cassidy and the Sundance kid’ (1969). He had the ability to portray an unlikable guy but then smile and disarm us with his grin and those eyes, which made him dangerous. Through the seventies he worked constantly but not always doing excellent work. Often cast in “big” event movies, he would flex those movie star muscles and do excellent work, all the while winking at the audience. Certainly ‘Slap Shot’ (1977) remains among his best films, and then in the eighties he was doing brilliant work again, challenging himself as an actor. ‘The Verdict’ (1982) earned some of the best reviews of his career and finally working with Martin Scorsese, he won that elusive Academy Award for Best Actor for ‘The Color of Money’ (1986). After what seemed a lifetime of nominations, on his seventh he won, exactly one year after being given a Lifetime Achievement Award. If anyone thought he would rest on that laurel, no chance, and he surpassed that performance in ‘Nobody’s Fool’ (1994) and again in ‘Road to Perdition’ (2002).

If he had a best kept secret performance it was as one half of ‘Mr. and Mrs. Bridge’ (1990), a Merchant-Ivory production, meaning prestige, in which he was outstanding as a cantankerous judge trying to deal with strife at home in the form of his rebellious daughter and evolving wife. Though his wife, Joanne Woodward got the lion’s share of great reviews and an Oscar nomination, Newman equals her throughout the film.

I had the chance to interview Newman before he passed and it was a privilege. Settling into his chair we spoke of his career, his work in the sixties when three performances in six years should have won him three Academy Awards for Best Actor. He remains proud of his New York Film Critics Award and DGA nod for Best Director for ‘Rachel, Rachel’ (1968), which the Academy nominated for Best Picture but not director. We discussed acting, the art, the craft and his own admiration for Brando, saying “that cat had it all”. Funny, they said the same about Newman. Here is the list of top Paul Newman movies, selected from his vast filmography. You can watch some of the best Paul Newman movies on Netflix or Hulu or Amazon Prime. 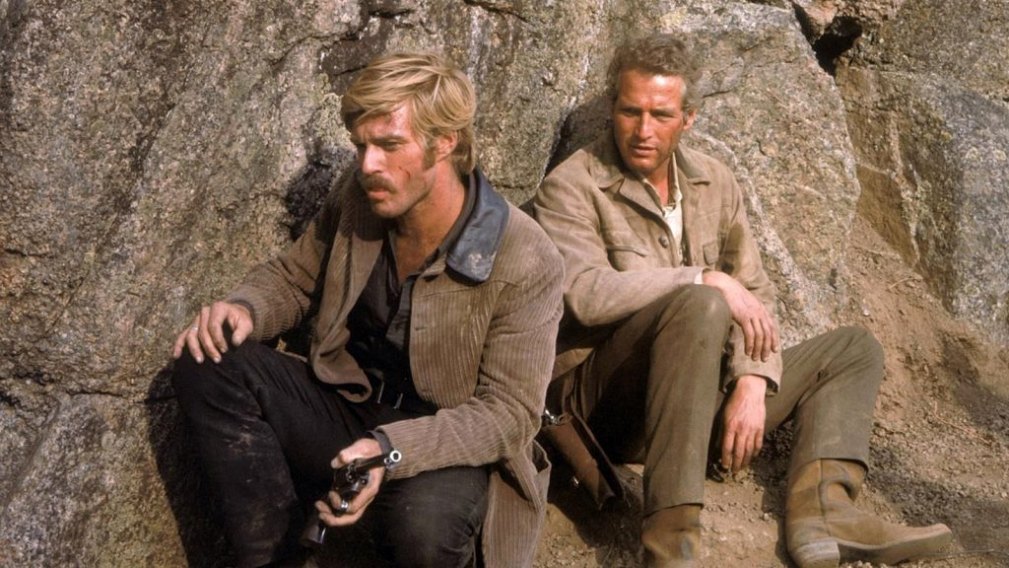 One of his most likable characters, he is Butch Cassidy, an outlaw on the run from a gang hellbent on getting him and his partner, the fast drawing, deadly, the Sundance Kid. He cheats at everything, he lies, he betrays, but never his partner, not ever. They are joined at the hip; even when Sundance is with his girl, Cassidy is not far away. A revisionist Western, it was a smash success leading he and co-star Redford to star in ‘The Sting’ (1973) which won seven Academy Awards. 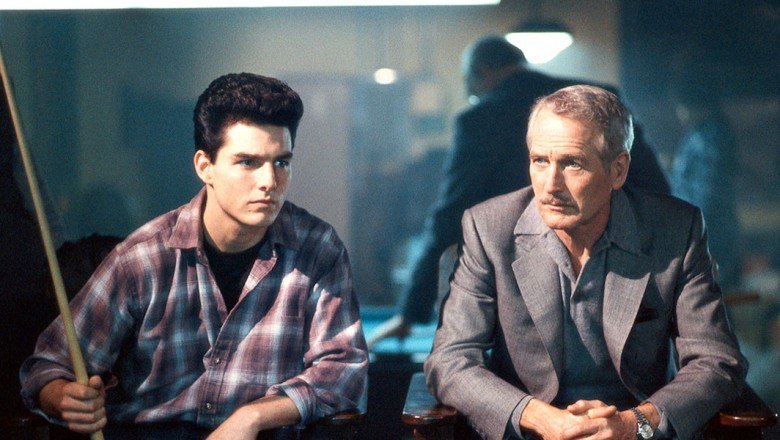 Twenty five years after the end of ‘The Hustler’ (1961), Eddie is still hustling, though not pool anymore, but booze. He has done well for himself, become well off, drives a Cadillac, and has the money to stake an astonishing young hustler he encounters in a bar. Hoping to make money off the kid, played with rambunctious energy by Tom Cruise, he realizes too late the kid is a flake (or is he?) and it is Eddie himself being scammed. Newman settles back into the character easily, making him wiser, gentler, but vulnerable. For this, finally, he won that Best Actor Oscar that had so long eluded him. 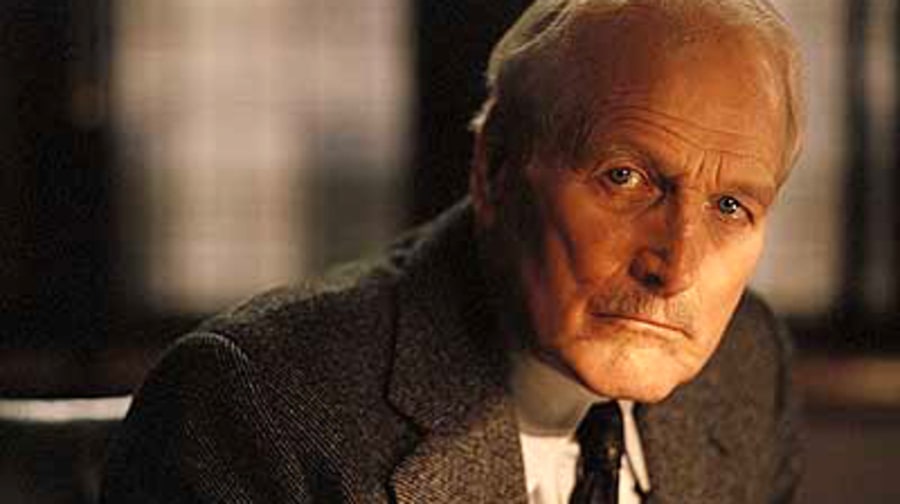 His last great, truly brilliant performance was in this handsome crime epic as Irish mob boss John Rooney who loves his hitman Michael more than he does his own son. But when a shake-down goes wrong, Michael’s son sees the killings and Rooney’s son massacres Michael’s youngest son and wife, choices must be made. Newman is somber, powerful as Rooney who carries the weight of the world on his shoulders. Finally face to face with Michael, knowing he is about to die he tells him “I’m glad it’s you Mike”. Brilliant. 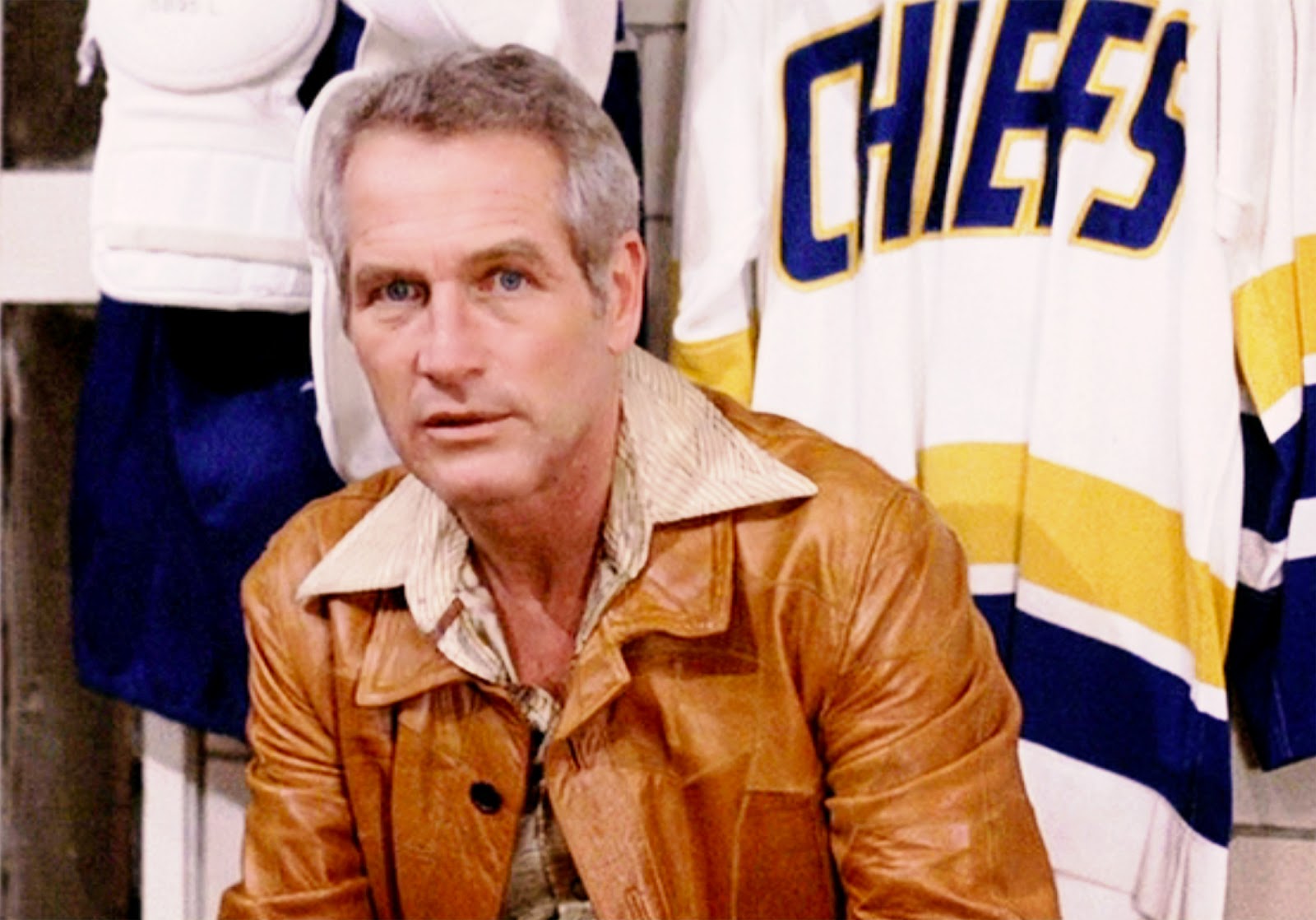 Not only is it the best movie ever made about hockey, it teems with authenticity and absolute realism throughout. Newman is player coach Reggie Dunlop, who after hearing the team is being disbanded, convinces them to fight, to goon it up in hopes of bringing in fans or giving the owner a chance to sell. The actor is a delight to watch, his mind always working out his next scam, reacting with joy at what he sees happening with his team, and finally getting a real offer to coach at the end. He did all his own skating, making this the most punishing physical performance of his career. 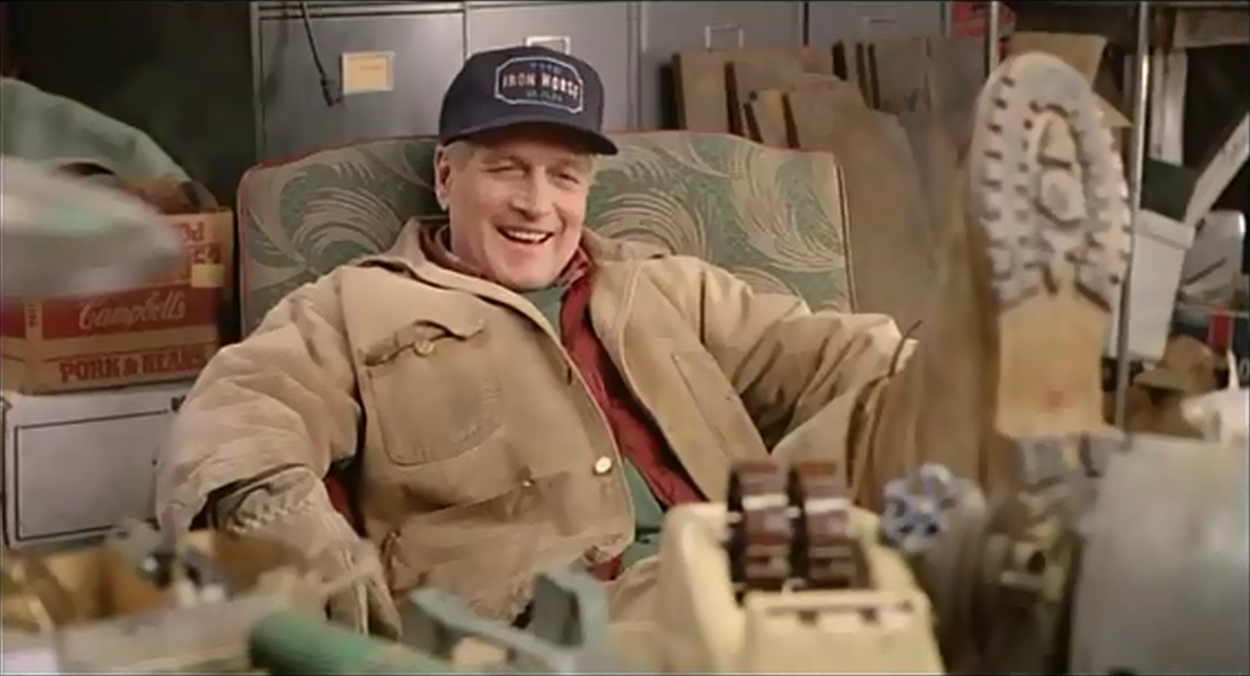 Newman is Sully, a sixty year old scamp living in a small town where his schemes are well known to all, and sometimes endured. He lives in a boarding house, is broke, works when he can and drinks and plays cards with his crew at the local bar. The film is a gentle tale of a man given a second chance, getting to know his grandson, settling down, and when his racing ticket wins, he is headed for a better life. Having learned some tough life lessons along the way, we expect his life might be easier. Newman won the National Society of Film Critics and New York Film Critics awards for Best Actor and was nominated for an Academy Award.

Still without an Oscar in the eighties, he found a plum role and got the chance to work with Sidney Lumet, something of an actor’s dream. As Frank Galvin, an alcoholic lawyer handed an easy case, he was superb, not able to pick up the shot glass for his morning shot as his hands are shaking from lack of booze in the system, he bends down to the glass and slurps it, bending to his crutch and knowing it. In the case, he sees a chance to get the family the damages they deserve, and redeem himself so he can look at himself in the mirror again. Powerfully real study of a drunk climbing out of the hole.

As Hud Bannon, Newman portrays one of the darkest characters of his career, a liar, a cheat, womanizing, selfish uncaring lout who is out for himself and no one else. It just takes people a while to figure him out because his smile pulls you into his world, where he uses you to further himself. Everyone he encounters, he hurts, terribly, altering their lives, while ignoring the pain he causes and sucking back a beer. This might be the bravest work of his career and should have won him his second Oscar. For his mercurial performance as Fast Eddie Felson, Newman should have won his first Academy Award, daring to portray an arrogant pool shark who takes his game to the highest of heights, yet leaves behind one who loves him. Teamed with the satanic manager Bert, portrayed with volcanic fury by George C. Scott, they are an unstoppable force under the lights of the darkened pool hall. Newman is a force of nature, perfectly at home in the smoky, dank halls where money changes hands as he hustles weaker players. Only when he has lost that who he loves does he realize what an arrogant fool he has been. Recovering from broken hands, he handily beats Minnesota Fats without breaking a sweat, now cold and disciplined. 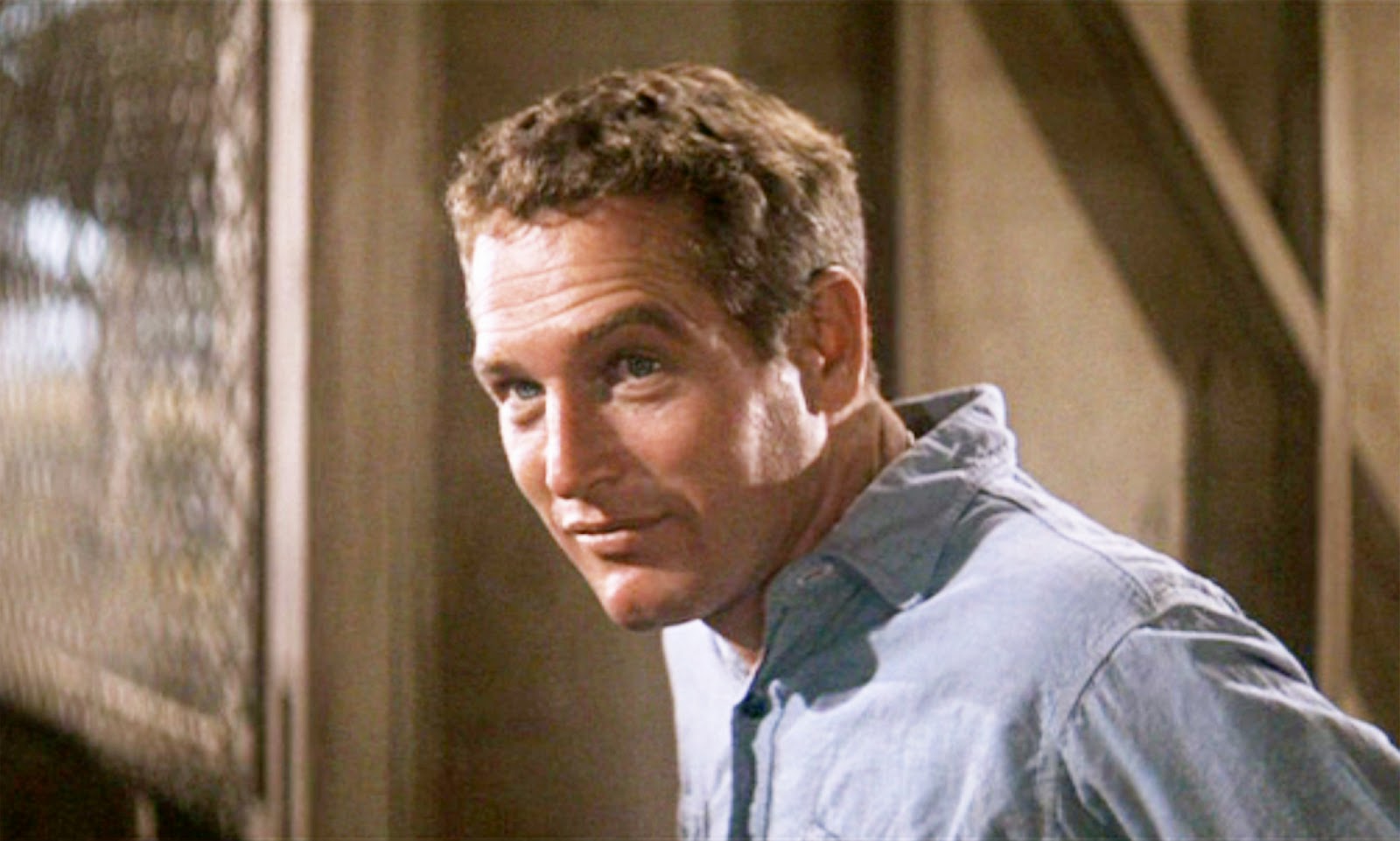 “What we have here is, failure to communicate” says the vicious warden as he beats Luke again, as again the defiant prisoner has defied him. Newman was never better than he is here as a counter-culture hero, almost Christ like, a petty criminal sent to a harsh southern jail where he simply refuses to co-operate with anyone, the guards, the prisoners or the warden. He earns the respect of the prisoners who love him, as he gives them hope, and the wrath of the others who hate him. He cannot be caged, which is what that failure to communicate really is all about. Breathtaking work that should have won him his third Oscar of the decade.