R rated superhero movies may be all the rage now, courtesy of ‘Deadpool’ and ‘Logan’, but they have been in production since as long as the 80s. It’s as they say, that sometimes, it does take the mainstream to change the norm. The success of big, studio oriented films, especially superhero properties at the box office is, I hope, for the better, since it goes on to prove two things. One, the audience is maybe finally ready to stomach the amount of violence or crude humour characteristic of R-rated movies, presented in a mainstream movie. Two, studios are finally ready to take risks in terms of R-rated content in their movies. In many ways, that works as a cause and effect relationship too. But cinema commerce for some other day.

It is now an established fact that we absolutely love some gut slashing violence in our superhero movies. After all, there can only be so many morally upright superheroes before one Deadpool comes in and swoops all that morality out the window (Hardly anybody minded Deadpool sex scene or its movie rating). Time to update your watchlists people, here is the list of top R-Rated superhero movies ever made. You can watch several of these adult Superhero movies on Netflix, Hulu or Amazon Prime. 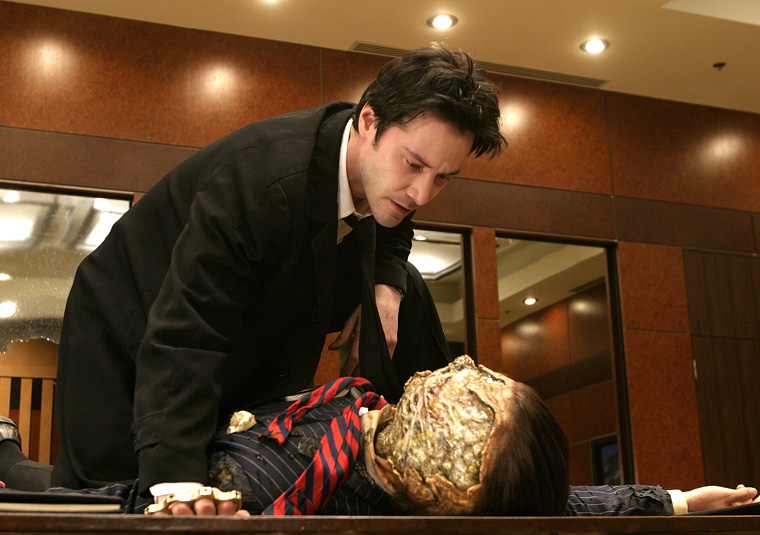 The least R-Rated movie on this list, so to say. It could have easily passed as a PG-13 thriller rather than an R-Rated horror flick, but since the MPAA sided with the latter, this movie finds a place on the list. The film stars Keanu Reeves as the titular character John Constantine, the famous cynical occult detective from the house of DC Comics. More of an antihero, John Constantine, for me, is one of the most intriguing characters in the DC roster and one hell of a badass. Therein, I believe, lies the film’s judgment. The fans of the source material may be disappointed due to the film’s major departure from the source material. On the other hand, as a standalone flick, it is pretty watchable with great special effects and a somewhat structured plot to say the least. The same is true of Keanu Reeves’ portrayal of Constantine too. The action sequences are great too, nothing too R-Rated though. If you are not too privy with the Hellblazer comics, you might end up enjoying this film greatly; I know friends who have! 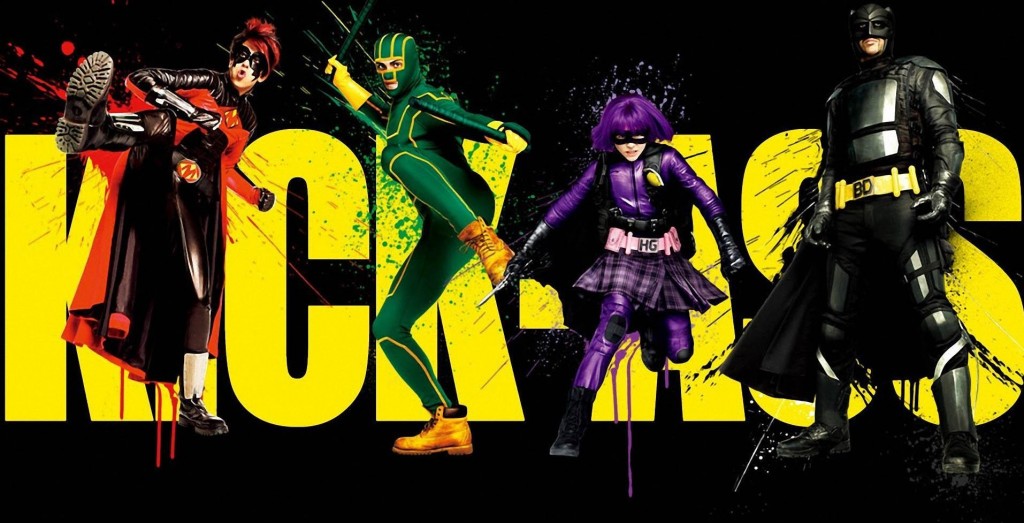 Matthew Vaughn, by now, should be a force to reckon with in the comic book arena. His films, undeniably, have his trademark visual rendering and that sense of urgency in its action scenes that make them all the more enjoyable. His filmography too, is rather impressive. ‘Kick-Ass’ was only his third feature film, and deals with a teenager taking up the titular mantle to fight crime as an unlikely superhero. While the film drew some criticism for its act of violence performed by the then thirteen year old Chloë Grace Moretz (which I agree with, to some extent. It does get a little disconcerting), notwithstanding that, it’s a pretty fun movie and more than earns its R rating, making good use of it in several instances, both action and profanity wise. I have a few issues with the tonal inconsistencies of the movie, but, as a fun comic book movie to watch on a laid back evening, it is perfectly serviceable.

Oh, the possibilities that they had with this one (and the end product) literally hurt me physically. Typical case of ‘what could have been’! Avid comic book followers know that the source material on this one is immortal, for the lack of a better word. The graphic novel beautifully and ingeniously exploits the dichotomous relationship between the Joker and the Batman, in who has the last laugh, with the Joker continuously pushing Batman to extremes, hell bent on proving that all it took, was one bad day. The story is also pretty iconic in Batman’s continuity, showcasing how Barbara Gordon transformed into Oracle from being Batgirl, unfortunately though, following being handicapped after being shot by the Joker. The animated feature adaptation however, turned out to be just about mediocre. Perhaps this was because of my mammoth expectations, perhaps something else. Still a good one time watch, owing to some powerful lines, first rate voice acting (it’s Kevin Conroy and Mark Hamill, what d’ya expect?), a relatively well told Joker origin story, and well, because it’s Batman. 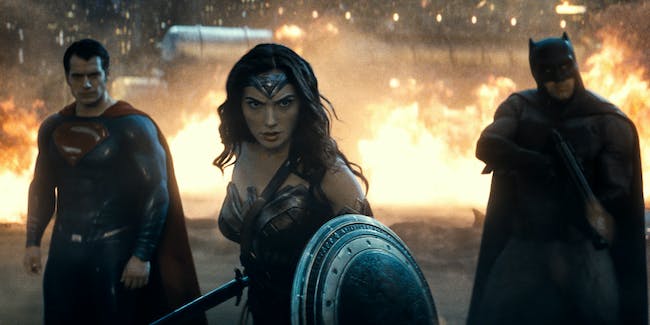 Following BvS’s critical debacle, WB decided on releasing an uncut version of the film for home media, the way Zack Snyder intended the film to be in the first place. All that was left out on the editing floor was gathered and added to the theatrical cut, increasing the runtime by 30 minutes. The ultimate cut has two uses of the F word, a Bat-Ass, some violence, and some blood splatter that was edited out to make it more PG-13. The good news: the extra footage does solve most of the continuity issues the theatrical cut had, and Superman’s arc in the story started making some sense. The bad news: the larger issues still loom over the narrative. The movie STILL works out big time for me, but that is perhaps because I am a fan. Others may give it a try for a more contemplative superhero movie experience. Then ofcourse there’s Wonder Woman’s debut on film too; I don’t reckon you’d wanna miss that!

Few are aware of Marvel’s other R-Rated superhero property (apart from Deadpool) that also received a film adaptation in 1998, starring Wesley Snipes as the titular vampire killer. This is a film that showcases the most ingenious killings for a superhero movie: vampires are shot, stabbed, cut in half, shoved, punched and burned. Safe to say, the R-rating is completely warranted, complete with a lot of profane language too. The film is dark and disgustingly violent (in parts) but almost always stylish and severely cool, much of which can also be credited to the charisma of its lead star, Wesley Snipes. It’s a very definitive comic book movie for its time, a time unlike today when not many superhero movies were made. Fan or not, this is one movie that you should have seen if you like either action/comic book or monster flicks. 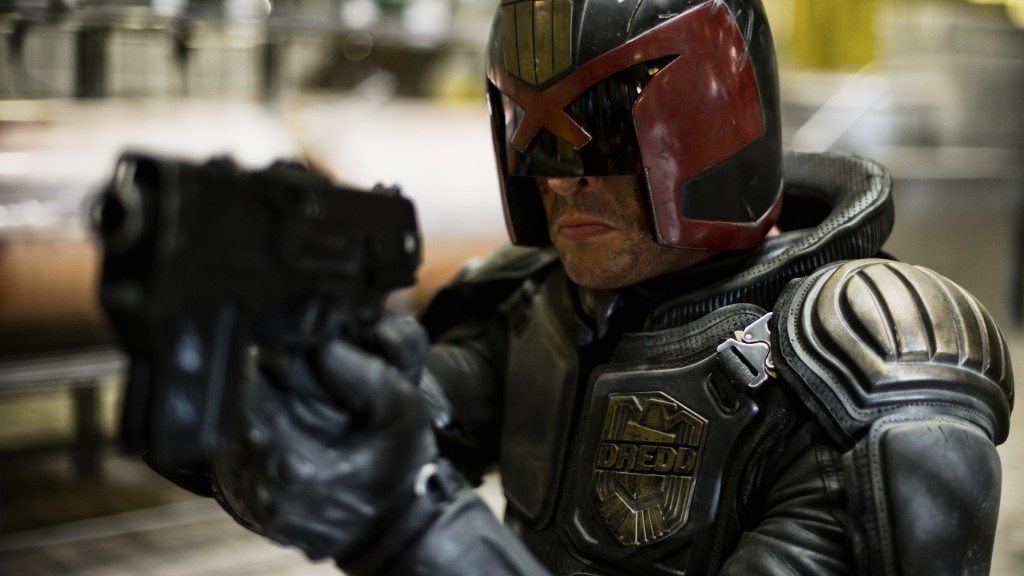 One of the most criminally underrated films of this decade, this dark, violent action flick about Judge Dredd, the titular character, features some gut wrenching violence and a brooding atmosphere that breathes life into its gorgeously realised dystopian landscape. Karl Urban was perfect casting as the titular character and Lena Heady did justice to her role. The action too, was brutal, and nicely shot and choreographed, earmarking the film from beginning till the very end. While Judge Dredd may not be the most obvious choice for a ‘superhero’ on this list, with many claiming him to be a cyberpunk-ish vigilante in the first place, many sources do associate Dredd with superhero circles, albeit a despicable one and in a completely different fictional setting. The film has now earned a reputation as a cult film, but I figure it’s too late since a planned sequel has been already cancelled owing to low box office returns at the time of its release. Sigh! 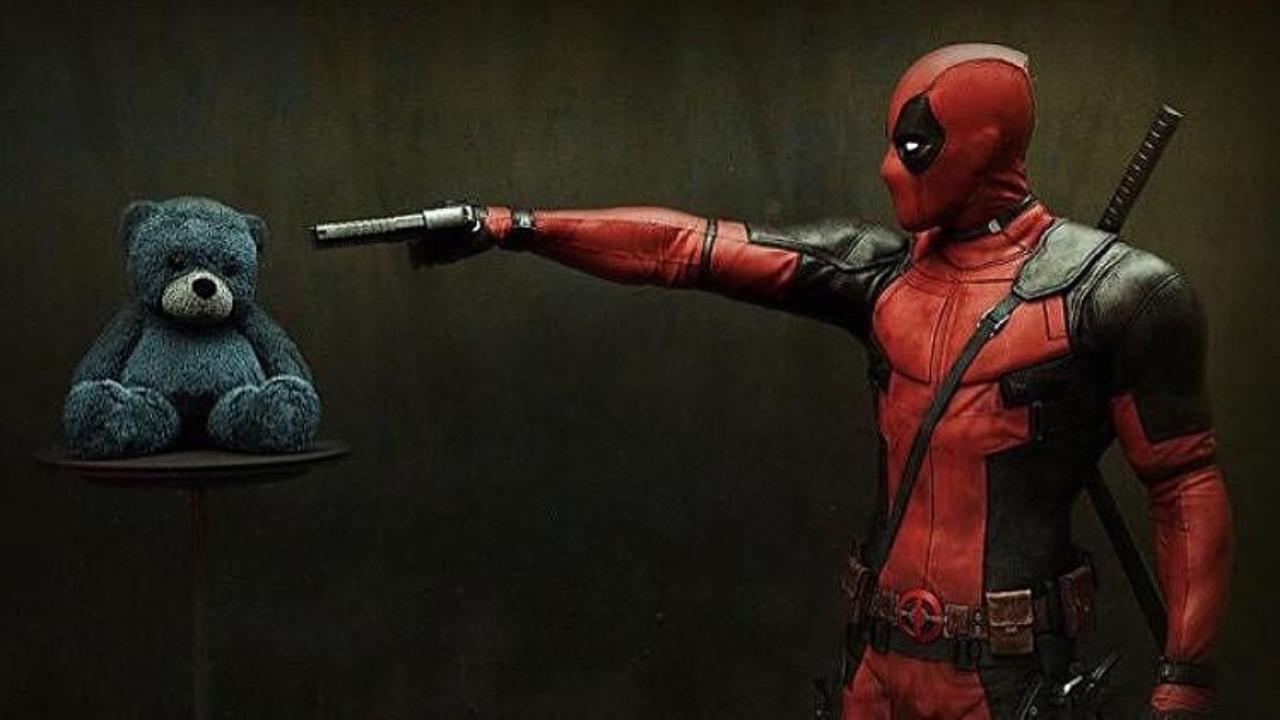 The only superhero film in recent times that I have known to cause quite an uproar, and for good reason. Fox finally realised the folly of its ways (mute Deadpool, I’m looking at you) and gave Ryan Reynolds the role of a lifetime: the merc with a mouth. This one was closer to the source material and showed Deadpool the way he is supposed to be: unabashedly crass, uninhibitedly violent and continuously bantering breaking the fourth wall. The test footage released before the production was fast-tracked and fully supported by Fox received overwhelming support from fans. Eventhough, the film was produced on a miniscule budget, which it also mocks, by the way, the film reaped ripe returns and a sequel was quickly greenlit. No doubt about it; Fox took a risk and struck gold with this one. 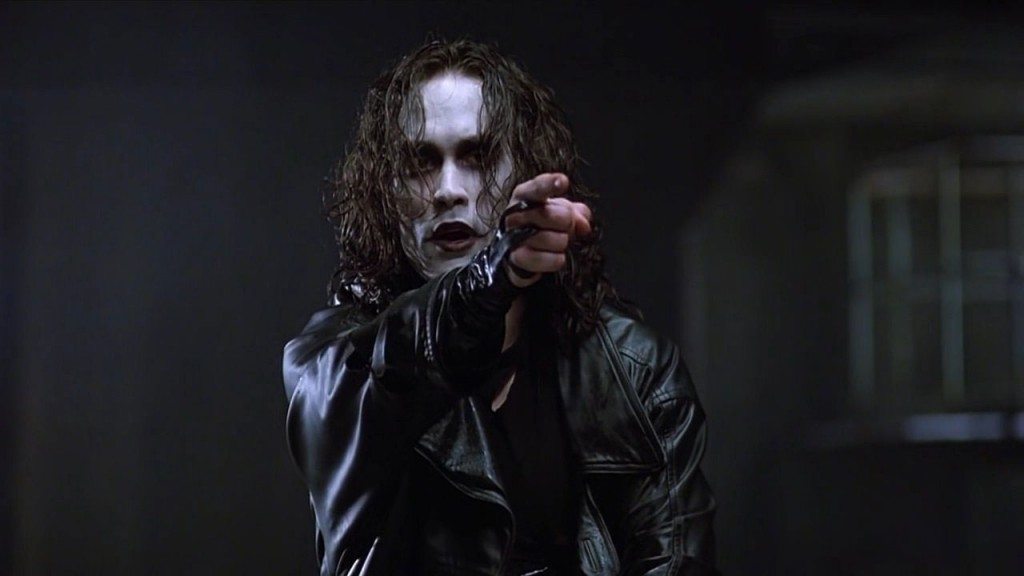 Now this is a film that is always associated with a bit of melancholy upon mention, mainly because of the fact that the film’s lead actor, Brandon Lee, accidentally passed away while shooting for this film. However, that doesn’t once shadow the fact that ‘The Crow’ is a great film. The film’s setting seems mostly Gothic, and the background score and cinematography are perfectly in sync with the moody revenge thriller that the movie is. The dialogue too is hard hitting, with a sort of darkly philosophical undertone to it. The violence is a handful too, in both, the wrongs inflicted upon the lead characters and the revenge exacted from the assailants when Lee’s character is resurrected as The Crow. Brandon Lee puts forth an excellent but haunting final performance, one that would have been a benchmark in an otherwise illustrious acting career cut short by his untimely death. The film is a faithful adaptation of its source material, maintaining the trademark grunge and visual style of storytelling too. 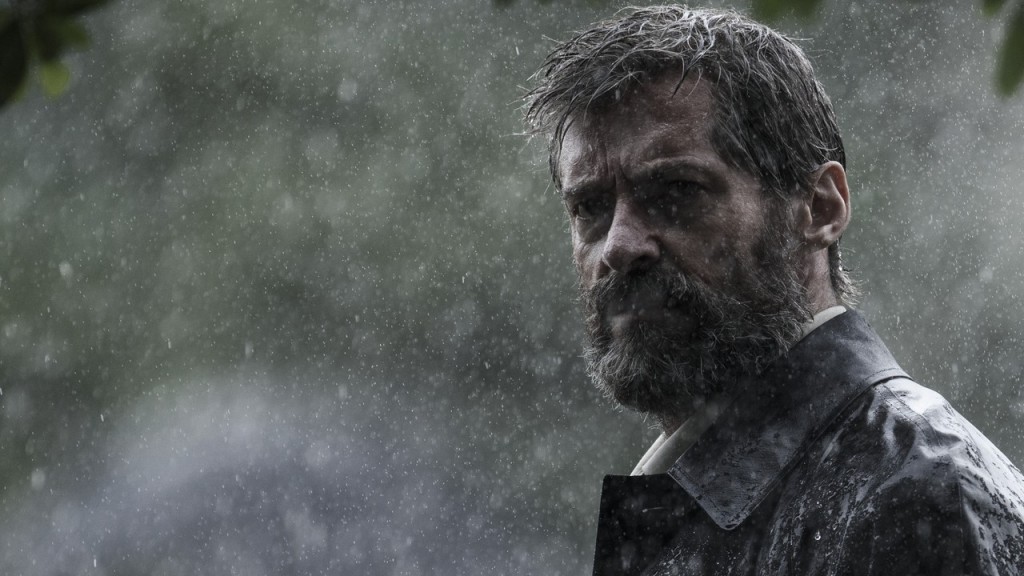 Sadly, this was Hugh Jackman’s last outing as Wolverine. Very few actors have the privilege of donning a role, and playing it for so long and with such commitment that they can call it completely their own. The makers decided to deliver a film befitting the character’s 17 year-long film legacy, and chose to go all out with the display of violence and a little bit of profanity too. (The F-bomb is dropped quite a number of times). The end product was gritty, raw, and surprisingly realistic and somewhat empathetic for an R-Rated superhero film. Special mention for the chemistry between the leads and the score by Marco Beltrami. However, to be quite honest, I still have mixed feelings towards the film. But, I am at peace knowing this is how Hugh Jackman wanted it. A befitting farewell, if not a perfect swansong, in my opinion.

The perfect comic book adaptation in my opinion. Watchmen is dark, gritty, violent, and features some nudity as well, that makes it more than warrant the R-rating. But, despite all that, what makes it work so well (apart from its source material) is that it receives just the right amount of stylistic treatment in Snyder’s hands. Action sequences are brilliantly shot and edited, the atmospherics work at large, characterisation and casting is near perfect, (Rorscach, especially Rorscach)  and the story set against the cold war setting, in a world where people grow wary of the role of vigilantes in the society (which has also become Snyder’s recurring motif in the DCEU) is solid. The ultimate cut with ‘The Tales of the Black Freighter’ incorporated in the main cut is just icing on the cake.