Review: Between Two Ferns The Movie is a Lot of Fun 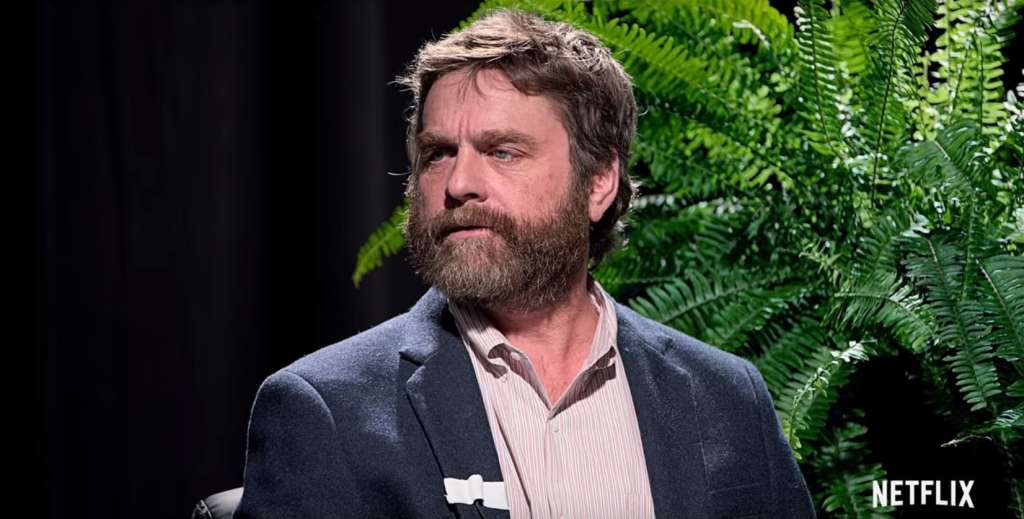 ‘Between Two Ferns: The Movie’ is Netflix’s latest addition to its notable list of comedy films. Directed by Scott Aukerman, the movie is based on ‘Between Two Ferns with Zach Galifianakis’, the talk show that airs on Funny or Die, the network run by Will Ferrell.

If you are at all familiar with the original series, then you will know how it stands apart for the awkwardness of the host, that is, Zach Galifianakis. It can almost be described as an anti-talk show. ‘Between Two Ferns’ does not hesitate to poke fun at America’s many talk shows and how celebrity culture is praised continuously by the hosts of these shows. Galifianakis is here to turn all that around, playing a rather abrasive character who intentionally asks the celebrities awkward questions or pokes fun at their personal lives and careers. None of it is mean-spirited since the celebrities are in on the joke. However, the awkwardness is heightened by the old school graphics the show goes with, and the setting, which, true to its name, places Zach and the celebrity between two ferns.

The movie is much more of the same shenanigans that we have seen in the series, except for the fact that it adds the element of a road trip comedy to it, culminating in a moment where the show manages to champion the message at the crux, wonderfully. Without further ado, let us explain the ending of ‘Between Two Ferns: The Movie’, but before that, let us walk you through the plot. 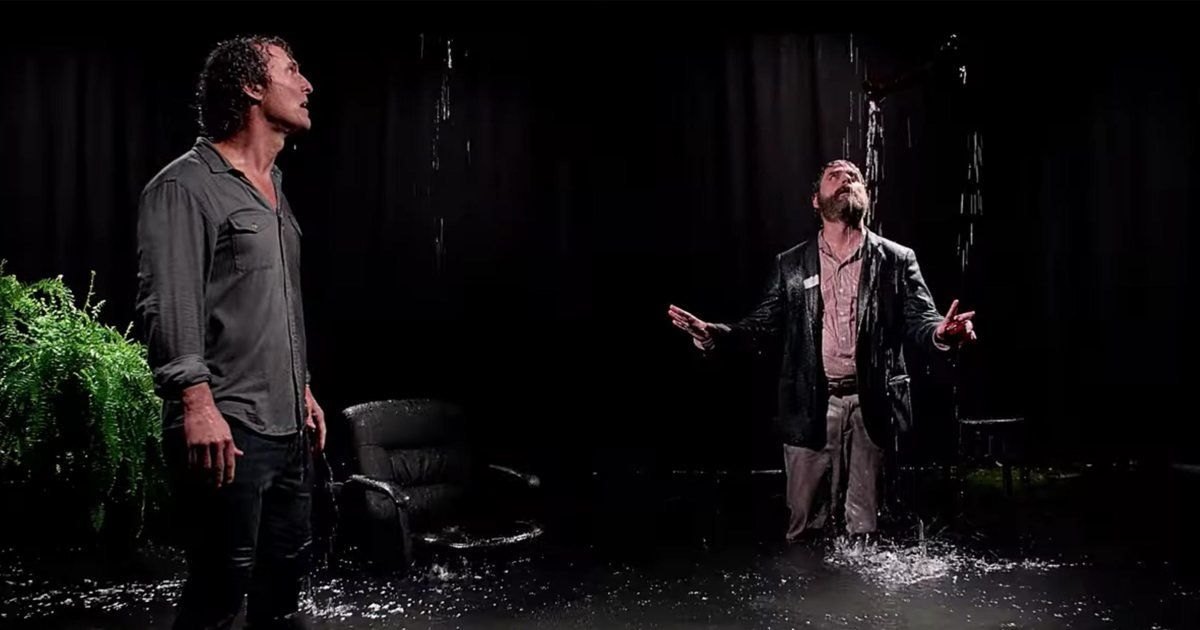 ‘Between Two Ferns: The Movie’ gets off to a funny start as we see an interview with Matthew McConaughey go terribly wrong due to a leak in the pipes, resulting in the entire studio being flooded. However, before we get too caught up in that, the film decides to go back a little, as we are introduced to Zach Galifianakis and his team. We see his camera guy, Cam. There is no love lost between the host and him. We also meet Carol, who Zach describes as his ‘Getter’ since she gets him, and also gets things for him. The viewers are given a little background about the show, which does not seem to do very well, and happens to be a part of the Flinch Public Access Tv network. Zach happens to be filming for a movie called ‘Behind the Ferns’, which is intended to give the viewers a look at what goes on behind the talk show, that frankly seems to be struggling to be popular.

However, Zach’s show actually happens to be popular for all the wrong reasons. People find him funny as a host due to the nature of the questions he poses. It is clear that they are laughing at him, not with him. As a result, he is popular on Ferrell’s Funny or Die network. This is an incredibly meta-reference since the original show, on which the film is based, actually airs on Funny or Die as well.

Coming back to the movie, Zach loses favor with Ferrell, who is visibly displeased that Zach nearly manages to drown McConaughey. The studio Zach shoots in is also destroyed due to the pipe leakage. Zach and his team are put on a deadline where they have to come up with 10 new episodes within two weeks in which they have to interview celebrities. Ferrell tells Zach that if he succeeds, he will be given his own late-night talk show on a major network. Zach has always dreamed of a Hollywood talk show and the enthusiastic host hits the road with his team, the camera crew filming him for the behind the scenes project, and the two ferns.

Thus begins a journey across America that is punctuated by some funny interviews, as the team bonds during the trip. It would be wrong to say that all the humor in ‘Between Two Ferns: The Movie’ comes from the questions posed to the celebrities. The crew working on the show have their own comedic moments. One that springs to mind is when Zach and the crew are checking out of a hotel and are handed the receipt.

Zach seems to have overspent by eating the snack bars and having ordered a porno, which he thought to be the movie ‘Analyze This’. There is a serious cash crunch after this, and the team does run into some difficulties as well. However, it is the way they face the hurdles, that brings them closer together. In fact, a touching scene between Zach and Carol plays out when the group is forced to seek shelter in an abandoned campground and Zach attempts to catch some fish for dinner. A conversation while fishing shows Zach’s nurturing side as he encourages Carol to follow her dreams and play the trumpet, while he attempts to provide for the group by catching some fish.

The final straw in the journey comes right as they are headed to Los Angeles. Zach nearly gets into an accident and his ferns are destroyed. He almost quits, even urging his crew to leave him. However, they arrange for a car to drive them to Los Angeles and Zach goes along, finally keeping up his end of the deal with Ferrell, which leads to the climax of the movie.

However, before we deal with the movie’s ending, ‘Between Two Ferns: The Movie’ has a host of celebrities who appear as themselves. The major part of the movie’s humor arises from their interactions with Zach. Thus, let us take a brief look at the celebrities and the questions posed to them.

Between Two Ferns Celebrities: Who All Appear in it?

It would be an understatement to say that ‘Between Two Ferns: The Movie’ boasts of quite a few celebrities. In fact, the movie hinges on the interviews conducted with the celebrities present, with a wider narrative weaving all the interviews together. Apart from McConaughey’s interview which ends terribly with the studio flooding, we have Benedict Cumberbatch. Naturally, Galifianakis, who cannot seem to pronounce any of the celebrity’s names correctly, has an especially hard time here. Peter Dinklage appears as well, and his interview is funny but even funnier is the part when Carol steals Peter’s Faberge eggs to pay for their trip to Los Angeles.

David Letterman also appears in the film. Zach doesn’t even spare him and makes fun of legendary talk show host’s beard. To be fair, Letterman seems to have the most fun among celebrities who appear, perhaps because he realizes the deep irony of the movie better than the others. Tiffany Haddish, Paul Rudd and John Legend are also seen. Legend’s interview is the most awkward for Zach because it turns out he slept with Legend’s wife, Chrissy Teigen, the night before. Needless to say, it ends with Legend pepper-spraying Zach in the eyes and his privates.

Brie Larson, Jon Hamm, Awkwafina, Hailee Steinfeld, Keanu Reeves, Chance the Rapper and Tessa Thompson are all part of the interviews and Zach manages to make every one of them equally funny and uncomfortable. Notably, if you stick around to watch the end credits, you can see how the celebrities are in on the joke and enjoy a laugh along with Zach when he poses the questions to them.

Gal Gadot also appears at the end of the movie, when Zach finally catches his big break, and on that note, let us explain the ending of ‘Between Two Ferns: The Movie’.

‘Between Two Ferns: The Movie’ shows Zach and his crew on a road trip as they manage to conduct 10 interviews with celebrities within two weeks. As a result, Will Ferrell gives Zach his own show on a major network, titled ‘Ferns with Zach Galifianakis’. Gadot appears as the first celebrity on his show. However, if you see the kind of questions posed to her, it is markedly different from the abrasive Zach we are used to. His crew members notice the difference as well and tell him that he is pretending to be someone he is not, and becoming a sellout. They inform him that the old studio is fixed and they are going back. Zach has an option to stay on in Hollywood or join them. Zach chooses the latter and even steals two ferns from the new studio. However, they get destroyed in a comical moment, but Zach does not care. He is back with his friends to do a show he loves, and he realizes that the ferns are not the most important part of the show that he puts out.

So, what does the ending mean? Well, firstly, the ending resonates with Zach accusing Cumberbatch of becoming a sellout for doing Marvel films after indie movies and theater work. Soon after, we see Zach changing his entire approach to talk shows to become a part of Hollywood. However, the entire point of ‘Between Two Ferns’, be it the movie or the show, is to take an anti-talk show stance and to show how hosts can be sycophantic in dealing with celebrities. Zach almost gets subsumed in the same culture, but the movie retains its critique of Hollywood, talk shows and celebrity culture. Zach is someone who will not pay heed to any of it and will continue to dismantle the celebrity culture with his pointed and rough-edged questions.

Finally, to conclude, the ending of ‘Between Two Ferns: The Movie’ keeps with its overall idea of critique that has been put out in the movie, and the series that it is based on. Zach Galifianakis almost gets subsumed into the system of Hollywood for fame and money. However, at the last moment, he snaps out of it, thanks to his crew. He decides to remain the subversive talk show host who will continue to pose uncomfortable questions to celebrities to make it clear to us that they too are human, and prone to errors. Zach promises to remain the same humorous person instead of trading it all in for a show on a major network, where his old brash self would have to be hidden away and traded for a mellower veneer.

Read More in Explainers: Ready or Not | Five Feet Apart

Where is Isauro Aguirre Now?