Review: ‘Beyond the Clouds’ Fails to Take Off 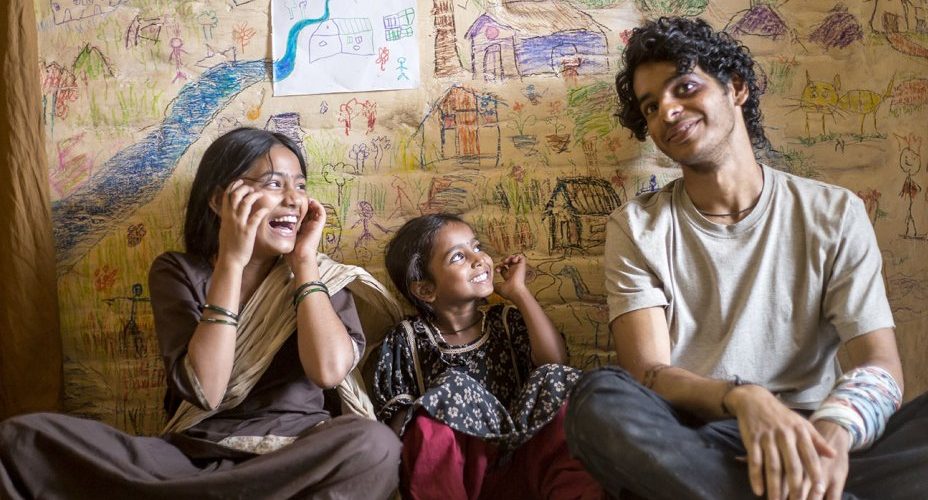 ‘Three and a quarter billboards’ arrest your attention at the very beginning and you instantly get a feeling that this is going to be a film filled with stories of angry individuals who have suffered due to the incompetence of the law. Was it deliberate on director Majid Majidi’s part to make a cinematic cross-reference to a much talked about – Three Billboards Outside Ebbing, Missouri – film of the recent past? Perhaps no, as the characters here are legally ambiguous and are hardly in a position to bargain with the law. The leading man of the film – Ishaan Khatter, in his debut feature – makes a hurried entry to his introduction scene; pulling up his pants and happy-go-luckily displaying his street-smart body language. Accompanied by a buddy on a bike he pulls off a Jesse Pinkman – peddling drugs – on the streets, shops and dark alleys of Mumbai. He also channels his inner Shahid Kapoor – his half-brother – as he breaks into a dance at the most inopportune moments.

‘Beyond the Clouds’ is Iranian filmmaker Majid Majidi’s first foray into Indian cinema and he chose Bollywood as his palimpsest to tell a story set in the eternal city of dreams – Mumbai. His empathy towards common man and their sufferings is more than evident in his story of aspiration and emotional persuasion. His characters are morally volatile, emotionally robust, non-judgemental and aware of their surroundings and limitations. It doesn’t take a genius to notice that Majidi is clearly not at home dealing with an alien – Indian – culture as he seemed to have succumbed to certain stereotypes just like Danny Boyle did when he presented his version of Mumbai to the world in ‘Slumdog Millionaire’. There is always a celebration on the street and unidentified classical music playing in the background. Mr. Majidi definitely has no idea about what Indians eat for breakfast, lunch or dinner; an important everyday aspect which he might have overlooked while focusing on the inner turmoil of his characters.

Talking about his characters – they are impulsive and quick on emotional reactions but their emotions are highly misplaced as they have no idea when to start crying (and when to stop), when to shout and when to start dancing. Maybe they were all acting on the director’s cue who seems to be at a loss while spearheading a film in a language (Hindi) which is not his own and who seems to be trying too hard to strike a perfect between mass appeal and art house demands. In the end, he succeeds in achieving neither. A.R. Rahman’s score is also surprisingly insignificant in the film.

Ishaan Khatter is the strongest link in the film. He with his unadulterated talent and non-starry air (despite being a second generation actor) owns every frame that he is on and forms an instant chemistry with all his co-stars. Even when he goes overboard with his dialogue delivery, he does it in a relaxed manner, like that of a seasoned actor. If we compare him to Shahid Kapoor – which is inevitable and also unfair – he already has an upper hand as far as on-screen presence is concerned. He is also evidently a great dancer but we will have to wait for a while before we see him in a full-fledged dance movie. Malavika Mohanan – in her Hindi debut – proves herself to be an emotive actor but her character has nothing much to do except cry, shriek or project hopelessness and she gets enough screen time to showcase just that. Hers’ could have been a strong female character but it gets stagnant once the harshness of the reality hit her. Deepika Padukone who was in the running for the same role must be feeling relieved now. The rest of the cast is competent enough to carry forward the story in a dignified manner.

‘Beyond the Clouds’ is not an entirely futile exercise. Whenever you give up on the film it surprises you with a poignant, matter-of-fact scene and balances out the clichés with the genius of Majid Majidi. It’s deep in its intent but suffers from Bollywood-level triviality and even Majidi couldn’t help but give in to the temptations of being a popular filmmaker for once in his career.