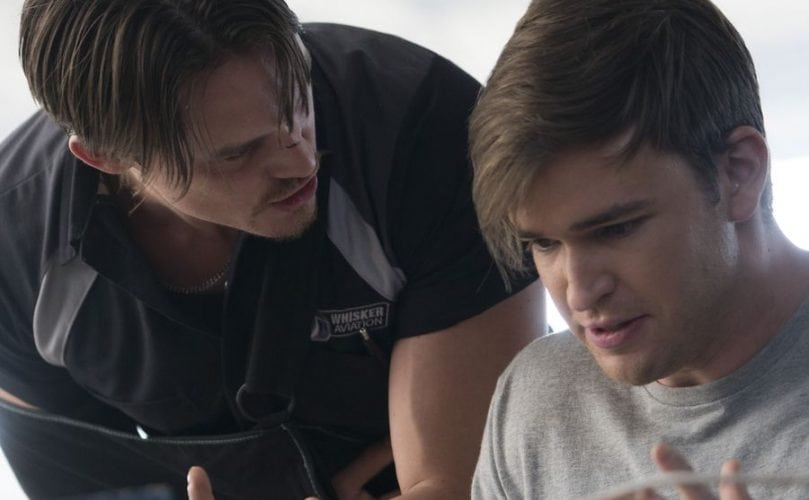 Science fiction sometimes dares to ask tough questions about society. ‘Beyond’ falls in that category. It is an American science fiction and drama television series which first premiered on January 1, 2017, and airs on Freeform. The series has been created by Adam Nussdorf.

The story follows a guy named Holden Mathew who wakes up from a coma after 12 years. He develops supernatural abilities which propel him into the middle of a dangerous conspiracy. He wants to know what had happened to him in the past years. He also has to find out why it only happened to him. He struggles to adjust to his adulthood and meets a mysterious woman named Willa. She warns him not to trust the people around him.

Beyond Cast: Who is in it?

The recurring cast members include Erika Alexander as Tess Shoemacher, Alex Diakun as Arthur, Peter Kelamis, who appears as The Man in the Yellow Jacket, Toby Levins as Sheriff Dayton, Kendall Cross as Mel, Chad Willett as Pastor Ian, Patrick Sabongui as Daniel, Emilija Baranac as Jamie and Martin Donovan as Isaac Frost.

Beyond Plot: What is it about?

The story of ‘Beyond’ revolves around a man who wakes up with powers after a coma of twelve years, to find himself propelled into a dangerous conspiracy.

In Season 1, Holden Matthews wakes up from a coma after 12 years. He develops a strange ability, and at the same time, he meets a mysterious woman named Willa. He gets attacked by a stranger and tries to lead a normal life despite all the strange events. He attends a college party with Luke and his parents; Tom and Diane try to form a bond with him. Holden gets a hint about the mysterious man who is trying to get to him. On the other hand, Willa tries to help a coma patient named Charlie. A man in a yellow jacket gives a task to Shoemacher to bring Holden to the Hollow Sky by any means. Luke tries to find answers to Holden’s volatile behavior while Jeff encounters a woman who can save Holden from the man in the Yellow Jacket and Hollow Sky. Willa takes help from Jeff and Luke to try and rescue Holden from Hollow Sky. Meanwhile, Diane takes a look at Tom’s research into Hollow Sky and why they are looking for Holden.

In Season 2, Holden tries to get back to his normal life, but he senses something bad is coming. Amidst the ominous air, Holden and Willa try to figure out their relationship. Holden also finds it very difficult to control his powers at his workplace and encounters some disturbing nightmares. Things get worse when Holden is not able to embrace his powers. Luke discovers that Holden sleepwalks at night. Shoemacher keeps on recruiting followers for Hollow Sky. After the reunion, Holden asks Charlie to help him in finding out what is happening to the realm and him. Jeff finds out details on a mysterious guy named Edgar and his relation with Holden while Agent Border decides to end Hollow Sky all by herself.

Beyond Season 3 Release Date: When will it premiere?

‘Beyond’ Season 2 premiered on December 28, 2017. The series had already seen declining ratings, which prompted Freeform to cancel the show. The official announcement was reported by Deadline. It comes as no surprise since the two seasons of the show had a year’s gap between them, making it even more difficult for ‘Beyond’ to hold on to its fan base. While there is a chance some other network might pick up the show, we would not hold our breath. If we hear anything about Beyond season 3, we will update this section.

Should You Watch Beyond?

Most aspects of ‘Beyond’ are reminiscent of previous and better shows like ‘The X-Files‘ or ‘Buffy the Vampire Slayer‘. However, that does not mean that the show has to be derided. Sci-fi shows can be derivative and still work wonders – case in point, ‘Stranger Things‘. However, unlike the Netflix superhit, ‘Beyond’ lacks a couple of things. One of them is well fleshed out characters, and the other being interpersonal relations and pacing. The series feels extraordinarily slow, mostly because the characters lack depth, be it Holden, or the people coming after him.

‘Beyond’ showed immense potential because of the entire issue of Holden coming back, and the ‘man out of time motif’. However, the series cannot adequately deal with the family’s reaction, and what could have been shown with either poignance or humor, depending on the tone ‘Beyond’ was going for, is not fleshed out in any great detail at all. The most that can be said for ‘Beyond’ is that it makes for a light watch if you do not read too much into the show, but you will find it hard to bring yourself to care for the characters.

You can check out the trailer of ‘Beyond’ season 2 below. If you have not seen the series, and happen to be in the mood for sci-fi conspiracies, then you can check it out.