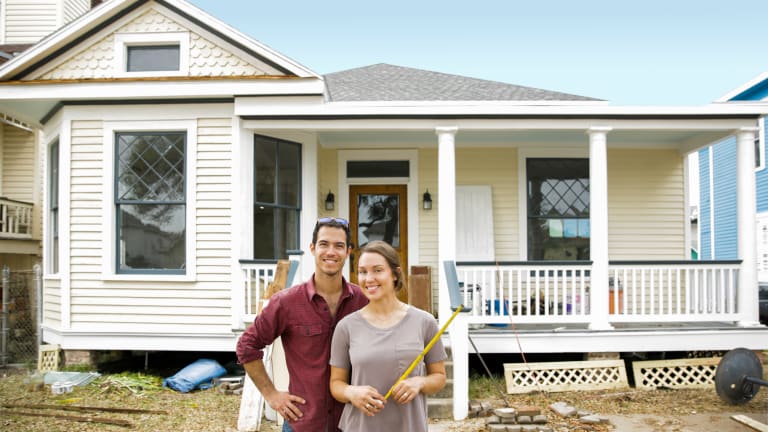 ‘Big Texas Fix’ is a home improvement reality show that airs on DIY Network. The series is set in the island of Galveston in Texas. The island is home to a number of magnificent coastal houses that have worn out after their long years of existence without proper maintenance. These houses are the focus of the show, and throughout the run of the series, we see them being restored back to their former glory along with the addition of modern amenities. Michael and Ashley Cordray, two house restoration experts, are the presenters of ‘Big Texas Fix.’

The Cordrays own a company which specializes in real estate renovation, and in this series, they bring their tricks of the trade to television. We are made witness to the complete remodeling of certain structures constructed in the 19th and 20th centuries and how they become modern architectural wonders at the hands of Michael and Ashley. In trying to renovate these houses, the couple does not do anything which takes their outer old-world charm away. A hint of the nostalgic charm of the structures is preserved in the re-imagination. Season 1 of ‘Big Texas Fix’ premiered on April 6. Here’s everything we know about the upcoming season of the show.

Big Texas Fix Cast: Who is in it?

Michael Cordray and Ashley Cordray are the main cast members of the show. Both of them are very passionate about their work, and their aim is to transform all the dilapidated old structures of Galveston into architectural pieces the locals can be proud of. Both Michael and Ashley do not want these buildings to be demolished as these are the last remaining symbols of the previous century which still remain on Galveston Island. The name of their real estate renovation company is Save 1900.

This is how the couple describe themselves on the company’s official website: “We are Michael and Ashley Cordray. We love old homes. Our life may seem a bit crazy, but to us, it’s perfectly normal. Whether we are looking at a house two hours after we said we wouldn’t buy another until we get one sold (…but it was a great deal), turning discarded materials (yes, that includes good old fashioned dumpster dives) into timeless projects, harvesting a little honey from our beehives, wrangling our chickens back into our yard from down the block (constant Houdini’s), or driving four hours one way for a front door – not a single minute is boring.”.

Big Texas Fix Plot: What is it about?

‘Big Texas Fix’ finds the couple Michael and Ashley Cordray trying to renovate old Victorian-era houses in Galveston Island, Texas. Ashley believes that “Galveston is an island that’s literally trapped in time. All of these homes have character and their own story, but they’re being torn down all over town.” When these houses are restored, Michael says that they will again become fit for residing in for the next hundred years.

Although the concept of what they do might sound really charming, Michael and Ashley put in a lot of hard work in making their dream become a reality. In one of the episodes, we see them trying to renovate a 100-year-old building. They do away with the age-old floor and use a reclaimed wooden floor for the building to bring in an old-world appeal to the entire thing. Then a car parking area is added to make the property more attractive for potential buyers. The interior of the house also goes through a complete overhauling while the installed doors and artwork exude the old-world charm which the Cordrays are trying to preserve.

In another episode, when they take up the challenge to renovate a house built in 1914, Michael and Ashley use their creativity to transform a dark and unusable corner of the house into a beautiful pink breakfast corner with a vintage wooden sign. An old duplex dating back to 1899 is transformed into a breezy abode for a family after a beautiful staircase is installed to give the house a smarter look. However, not all projects that they undertake end up successfully. An 1893 cottage that Michael buys proves to be a disaster to renovate, and they face serious issues in trying to convert it into something attractive.

Big Texas Fix Season 2 Release Date: When will it premiere?

‘Big Texas Fix’ season 1 premiered on April 6, 2019, on the DIY Network and ran for a total of nine episodes including the pilot. In this day and age, when everything has started looking the same due to the influence of far-reaching technology, authenticity is something which the world can really do with. So, if you are one of those who’s interested in preserving history, then you must check out how Michael and Ashley are trying their best preserve the past and bring it to the present.

As far as the next season goes, we don’t have an official announcement yet. Though considering the uniqueness of the show, we would be glad to see it get renewed. Our best guess is that if the show does get renewed, Big Texas Fix season 2 can release sometime in April 2020. We will update this section as soon as we learn more.

We don’t have a trailer of the show to add, but you can surely head to the official website of the show and check out clips and even the full episodes of season 1.