10 Best Biker Movies of All Time 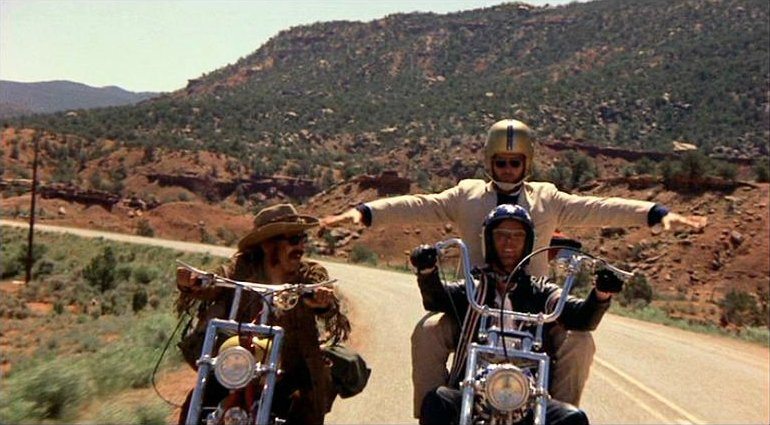 Nothing beats the feeling of the wind blowing your hairs up and kissing your cheeks, intoxicating you with a feeling of liberation that is too hard to put into words. Bikes are not just mere vehicles. They are an attitude. A feeling. Cinema has not produced a great number of films that managed to reflect this feeling but there are a few surprisingly good ones, most of which are cult classics of the outlaw biker genre. Let’s take a look at the list of top motorcycle movies ever made. You might be able to find some of these best motorcycle and biker movies on Netflix. 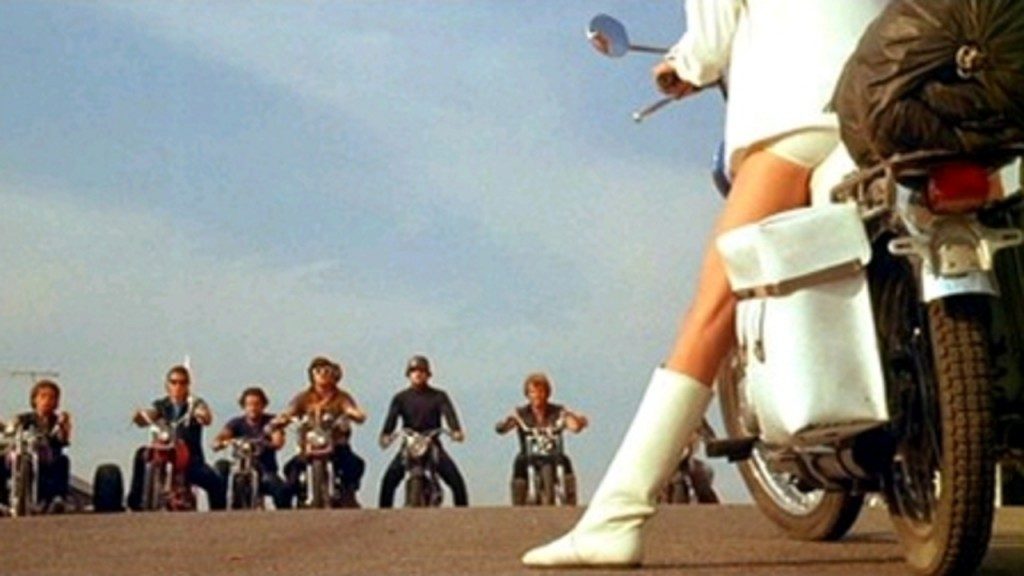 ‘The Born Losers’ is about a man’s single-handed battle against a violent biker gang who are notorious in the town for committing various crimes. The film is raw and violent but its intentions are pretty clear achieves every bit of that in away that might not make for a pleasant viewing but still keeps you interested with its involving plot and is probably the finest film of the Billy Jack series. It’s fun if you’re just looking to chill out and watch some really cool bikes roaring off the roads.

‘Electra Glide in Blue’ received highly unfair reviews back when it was released in ’73. However future evaluations and analysis have somewhat managed to lift the film off from obscurity and given it an almost classic status. The film is about an ordinary cop who gets to work on a murder case However the simple minded man in him finds hard to cope up with the rough ways his peers and boss work on as a deep emotional conflict inside him begins to tear him apart. The film is beautifully crafted with some memorable cinematography and the way in which it treats its characters and the subject feels refreshing for a film of its time. The title of the film comes from the Harley-Davidson Electra Glide Bikes issued to traffic cops. 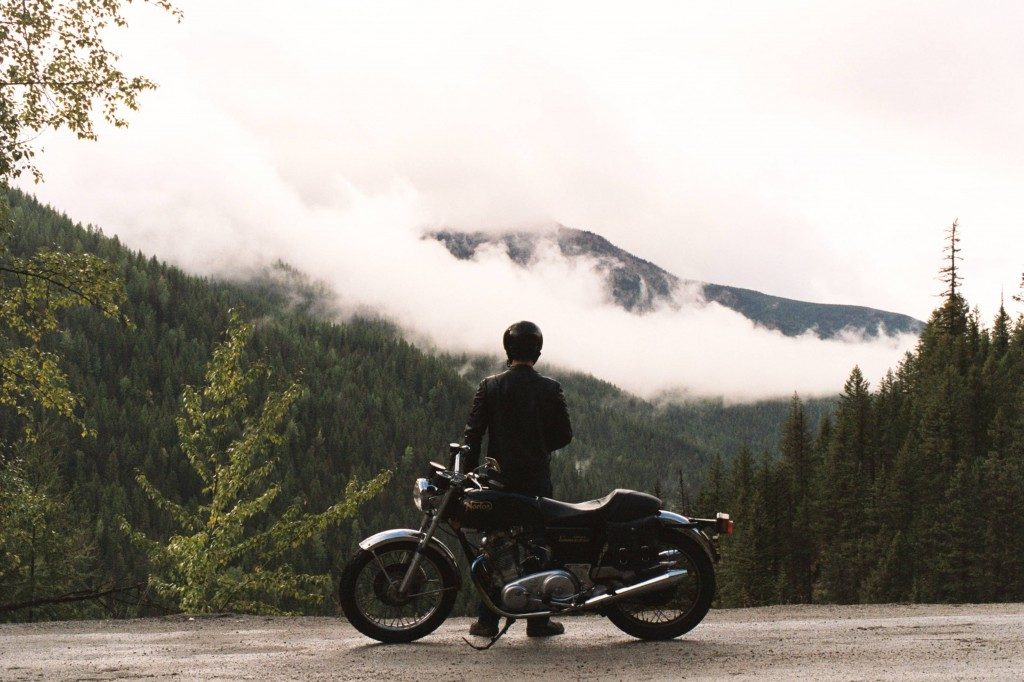 Not among the best indie flicks to have come out in the past 10 years but ‘One Week’ certainly manages to hit the right notes at places mostly due to the emotional element in the story. The film is about a man who goes on a long journey, in search of meaning in life after being diagnosed with cancer. He takes his lovely old bike and sets off for an adventurous journey. The film is weak at places that seems like trying a bit too hard on the philosophical aspects but something about a journey on a bike manages to strike a chord in you and that’s where the film manages to rise above being something just ordinary. One of the most underrated biker movies of all time. 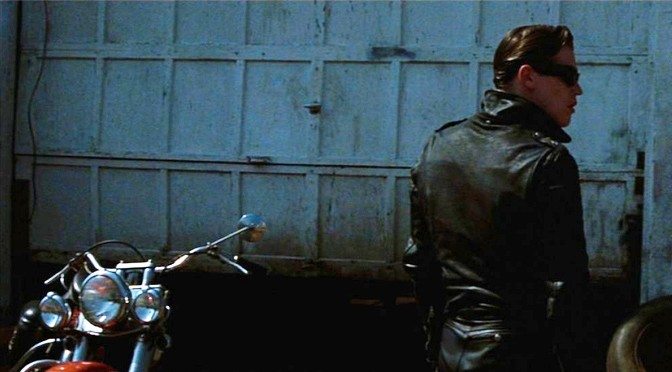 The great Kathryn Bigelow’s feature debut was a biker drama about a motorcycle gang that causes trouble in small southern town. It’s a typical outlaw biker drama flick that focuses more on the stylistic aspects than the story. There’s a lot of attitude thrown in, that makes it a very exciting watch and brilliantly manages to capture the aura and feel of its time. Bigelow has gone on to direct some stunning films later in her career and so this would seem a bit dated and raw for obvious reasons but nevertheless it must be watched to witness the evolution of one of the great filmmakers of our times. 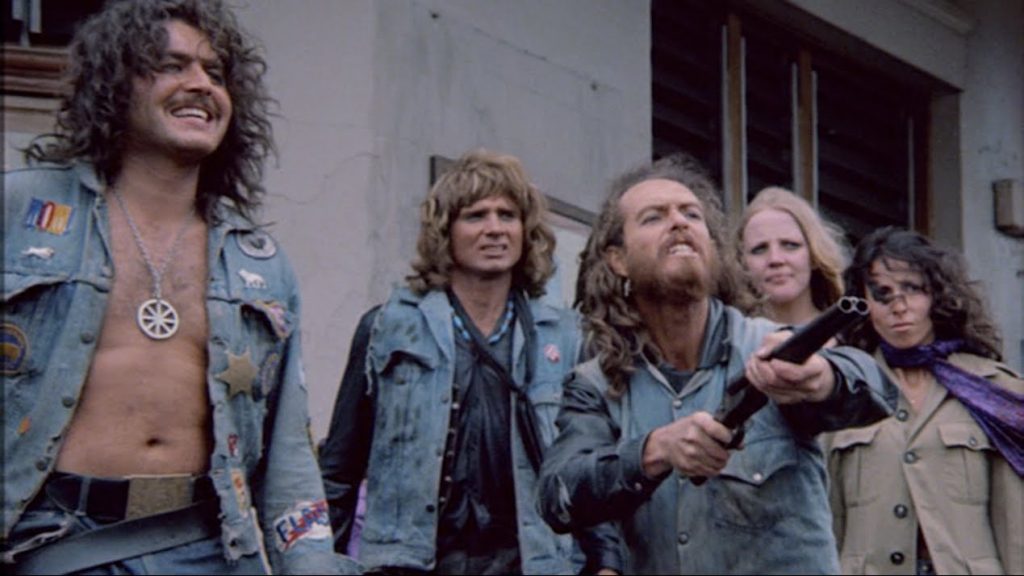 Raw, riveting and absurdly entertaining, this stone cold classic from down under remains one of the ultimate cult classics of the biker genre. The film is about a gang whose members are being killed one by one and a cop goes undercover in their gang order to find out the killer. Famous for featuring the every stylish Kawasaki Z900, this movie is an absolute treat for any bike lover and is a very important film that laid the foundation for more important stuff that were to follow including the iconic ‘Mad Max’. 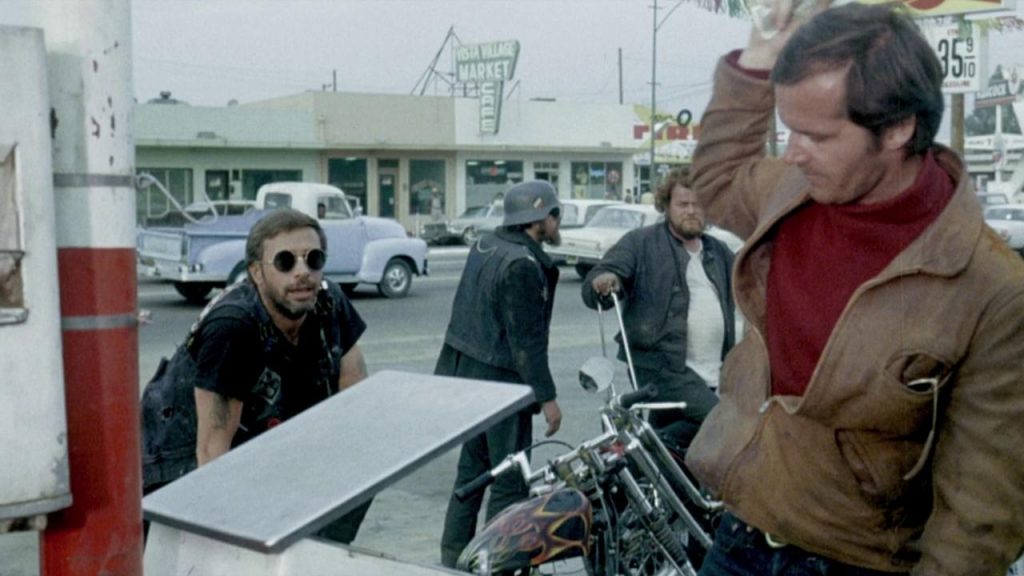 As a film ‘Hells Angels on Wheels’ isn’t particularly great but it’s still very much a product of its genre. The film is about a gas station attendant who is bored with his life and maintains a very bad attitude but discovers passion and excitement after hanging out with a reckless biker gang. However, he soon realizes how dirty things are with these people but he also finds himself attracted to one of the members’ girlfriend which leads to deadly consequences. The film has not aged well but still can be watched for its style and the way it manages to capture the feel of its time.

‘The Wild Angels’ is another classic biker flick that follows a gang being chased off by the police after a minor hiccup with Mexicans in a repair shop. ‘The Wild Angels’ came out prior to ‘Easy Riders’ and laid the foundation for a cinematic representation of the 1960s counterculture. The vision here isn’t fully realized and leaves a lot of its ideas and themes unexplored. But nevertheless it manages to capture the feel and aura of its era and though may seem dated at places now, works partly because of its ambition. 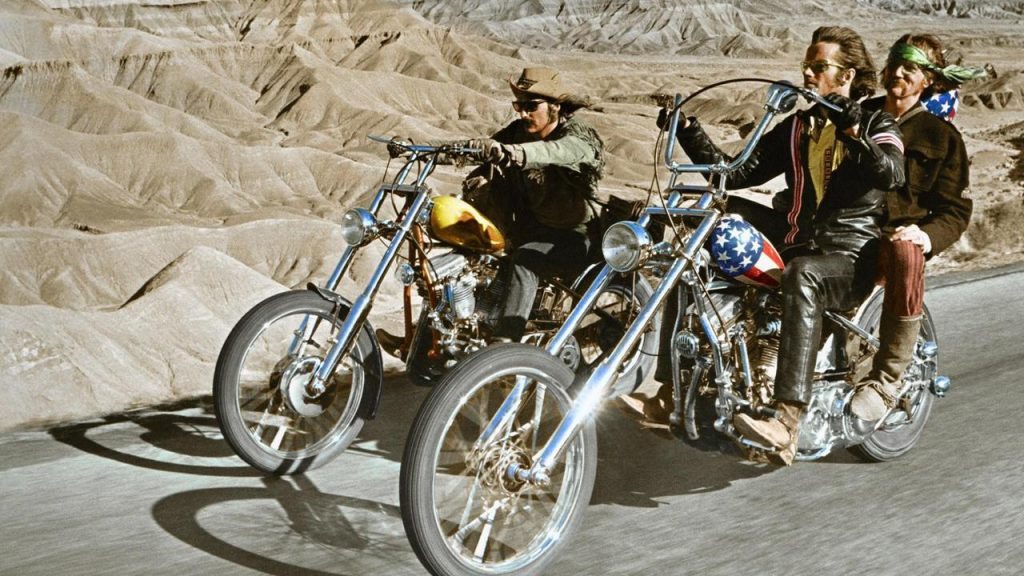 One of the coolest films ever made, ‘Easy Rider’ is THE film to watch if you are a true motorcycle lover. Having said that, the film is much more than just a couple of youngsters going on a road trip. It defined a generation, a culture and managed to represent the very essence of American dream. The film is a gorgeously violent exploration of the hippie movement in the 60s U.S and is no widely regarded as one of the most important American films ever made. Surprisingly enough, the film stands the test of time and still comes off as a striking, bold piece of cinema, partly due to the performances and its attitude. Talking about performances, Dennis Hooper and Peter Fonda are the heart and soul of the film. Their performances define the tone and feel of the movie. It also features a young Jack Nicholson as George Hanson.

‘Easy Rider’ is one of those films that perfectly captures the aura and people of its time. Some films, due to their thematic simplicity, do not translate well to a younger audience from a different generation. But ‘Easy Rider’ has aged so well, not just in terms of the filmmaking aesthetics, but also the content and storytelling style. It has that angry energy of the hippie movement that pervades the film, which is essential to the narrative. It’s not really a film that tries to convey a forced, naive message of hope and optimism; rather it’s a film that documents the realities of a tumultuous period in history. There have been several films that managed to capture the violent, rebellious attitude of youth, like ‘Fight Club’, and it is ‘Easy Rider’ that laid the foundation for such films way back in the 60s with its raw, inventive style of filmmaking fiercely defies traditions. 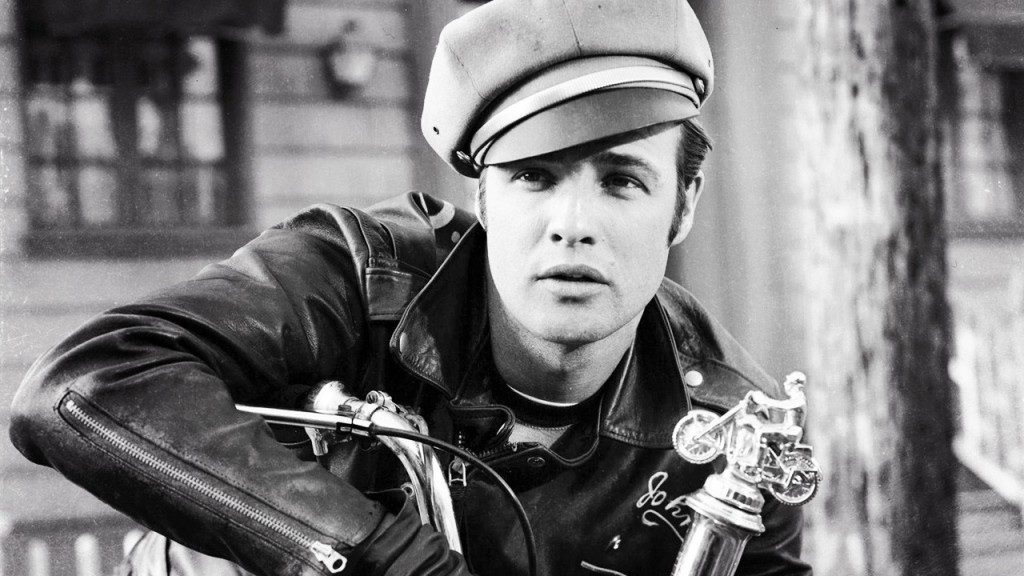 A young Marlon Brando and a motorcycle — well, what else could possibly be harder to resist? ‘The Wild One’ was the first film to take on the issue of American outlaw motorcycle gang violence and laid the platform for more films to explore the arena. The film follows a gang of reckless bike riders who cause absolute mayhem and destruction everywhere they go. They are well beyond the control of the Sheriff but something needs to be done to stop them. Johnny Strabler is one of the most iconic Marlon Brando roles not because it truly displays his acting prowess but because of his natural charisma and the seductive aura he brings on the film. The image above alone could inspire any motorcycle maniac.

Brando would, in the years that followed, astonish the world with his raw acting skills, but this is a film that purely focuses on his macho looks and style. I also feel that part of the film’s success can be attributed to Brando’s presence alone. He dominates every scene that he’s in and gives the film a very distinctive tone that couldn’t have been attained with any other actor in the lead role. The film may seem dated now, but it gives us insights into Brando’s early acting style. It’s not a film that I would recommend to movie lovers in general, but for bike lovers, this one is a must watch! 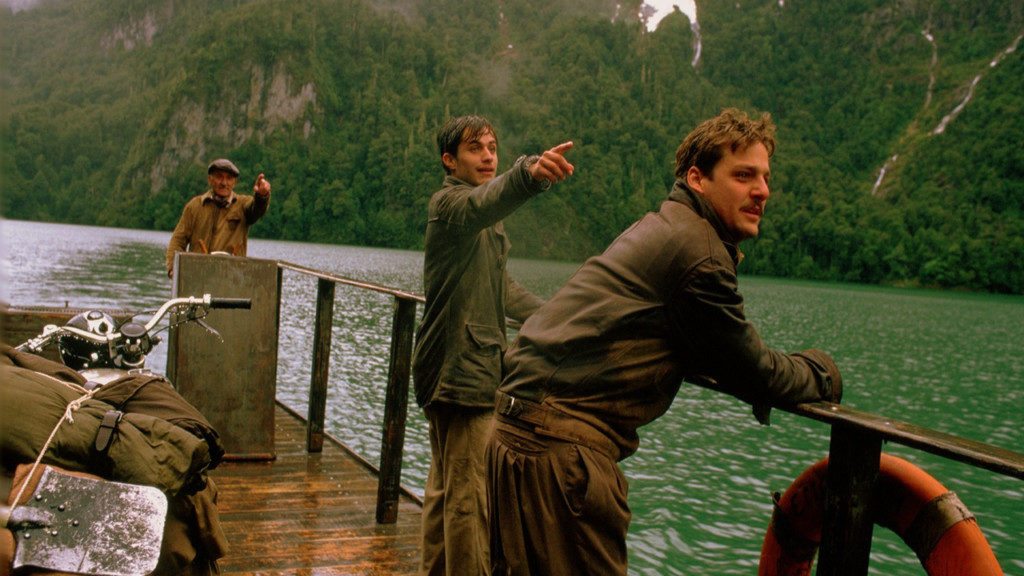 ‘The Motorcycle Diaries’ depicts the life changing road trip of a young man named Ernesto Guevara who would go on to become known as a Marxist guerilla commander and the face of rebellion by the name of Che Guevera. This gorgeously shot film is a masterful depiction of a memorable journey that opens life up to you, as it shows the painful realities and stunning beauty of the very land you belong to. It’s an exhilarating experience that invigorates you with a true feeling of liberation that inspires you to chase your dreams.

What makes the film so special is its ability to keep you engaged in the simplest of ways. Even if you take out the political context of the film, as a viewer, you never feel distanced from the main characters, which is the main reason why the film resonated with a lot of people. I guess it’s the sheer universality of the story that makes the experience of watching the film so immensely personal on many levels. We’ve all been through those early phases of youth, where we’ve looked to change the world in ways that we could; some succeeded and some failed, but ultimately it’s the journey that make our lives worth living. And that is where we could all relate to the character of Ernesto ‘Che’ Guevara. Another striking thing about the film is the emphasis it lays on the human aspect of the story rather than turning it into a political film, which makes for a very profound cinematic experience. It might not be the most nuanced exploration of an iconic political figure, but it still works wonderfully because it’s a story that has heart.