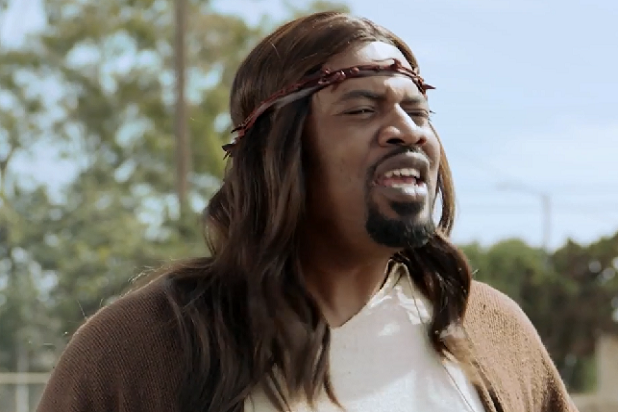 ‘Black Jesus’ is an American sitcom that airs on Adult Swim. The live-action comedy-drama is about modern-day Jesus Christ living in contemporary Compton, California. He has the same mission as Christ himself — to spread love and kindness in the neighborhood with the help of his small group of followers. Created by Aaron McGruder and Mike Clattenburg, it first premiered on August 7, 2014.

The show has had three successful seasons till now. The question you might be asking is: will there be a Black Jesus season 4? Let’s find out.

Black Jesus Season 4 Release Date: When will it premiere?

As far as the next season goes, it is fair to assume given the success of the show that Adult Swim will renew it for another season. While we wait for an official announcement yet, our best guess is that ‘Black Jesus’ season 4 will most likely release sometime in September 2020. We will update this section as soon as we hear more.

Black Jesus Cast: Who’s in it?

Gerald “Slink” Johnson leads the cast in the title role of Jesus Christ. The American rapper, actor, voice actor, and comedian is best known for his work on the video game ‘Grand Theft Auto V’. The late Charlie Murphy stars as Victor “Vic” Hargrove (seasons 1 and 2). Murphy is recognized for his work on the sketch-comedy series ‘Chappelle’s Show’. Corey Holcomb from ‘The Corey Holcomb 5150 Show’ fame is Boonie.

In season 3, we do not see the return of one of the most favorite characters on the show, Victor, played by Charlie Murphy, who passed away from leukemia in 2017. Victor aka Vic is the bad-tempered and negative landlord of Black Jesus and the team’s building complex. He is one of the primary antagonists in the series.

According to star Corey Holcomb while the crew was shooting for season 3, “They decided to bring Black Jesus back, so we’re getting ready to start filming again in September and that should be fun. It’s gonna be weird without Charlie Murphy on set. We’re gonna get this thing going without him, and I’m sure we’re still gonna make the show good, but it will be different not seeing him on set.”

Season 4, as and when it happens, is expected to see all other actors reprising their previous roles.

Black Jesus Plot: What is it about?

Adult Swim never shies away from controversy or from crossing boundaries when it comes to quality content. ‘Black Jesus’ is just another attempt from the platform that introduces a concept, which should not come as a shock to regular viewers of this channel. As the name suggests, ‘Black Jesus’ revolves around an African-American Christ, who resides in modern-day Compton, California. He attempts to spread love and kindness in the vicinity along with his rag-tag band of followers. His team may be small and mostly comprise downtrodden followers, but they are extremely loyal to Jesus and his cause. The series follows this contemporary avatar of the Messiah as he steps into the chaos of the urban jungle and dives into various misadventures — as he and his team regularly invent new schemes to convey the good word of the gospel to the ‘hood’.

In season 1, we see Jesus and crew launch a community garden in Compton, which grows mystical tomatoes, laced with weed. This activity causes a fight that introduces figures like Coolio for a major benefit concert. However, Jesus ends up in a mental hospital, thanks to his claims of being the actual Christ.

Season 2 follows Black Jesus after he is released from the institute. He is tragically surprised to discover that in his absence, his followers have strayed from the righteous path and are now engaged in ungodly things like stripping. To reverse the situation, Jesus and crew open a food truck and serve blessed fresh seafood from a polluted river. But things soon end in chaos when the venture prompts unlawful activities such as stolen cables and a pop-up restaurant, among others. The second season wraps up with Jesus deciding to live in his own version of A Wonderful Life, where he no longer is God’s son. But, toward the end, he remembers his vows and considers reviving his faith and sowing the seeds of goodness in Crompton.

Season 3, just like its predecessors, follows the protagonist as he continues to spread love and kindness in the neighborhood. One of the misadventures that the group faces along the way includes an encounter with a local caped crusader, which manages to draw the attention of the Pope himself.

After being released from jail, Jesus discovers some major changes — Boonie has shifted to his previous Compton Gardens apartment, adjacent to the “New” Compton Gardens, with Lloyd as the building manager. To add to complications, after witnessing a leaked video of Jesus performing a miracle, the Vatican deploys two secret agents to abduct him in order to determine his authenticity. On the other hand, Jesus’ friendly parole officer decides to become one of his disciples. Meanwhile, the head of security AmBro deploys troops to prevent drug deals in the neighborhood while Jesus allows Boonie to have a first-hand experience of the various challenges of being the Son of God.

Southwest Compton witnesses a new vigilante and Jesus needs to stop him. Ms. Tudi secures a small business loan and decides to launch “Tudi’s Wigs, Weaves, and Whatnots”. The Korean Bitch Mafia does not take this bit of news lightly. Boonie believes his soul has been captured by the spirit of an evil gangsta and he begins to behave that way. Jesus, next, lands as the coach for the Compton Devils junior high football team and his primary goal takes a major hit when he finds himself wishing to win at all costs.

Season 4, if renewed, will follow the various antics of Jesus and crew as they continue their mission while tackling various obstacles along the way.

While we wait for an update on season 4, you can check out the official trailer of ‘Black Jesus’ season 3 below. If you have not watched the show yet, head to Adult Swim and catch up on all its previous episodes.