What is ‘BlacKkKlansman’ About, Explained

When Spike Lee last won an Oscar, pigs soared high in the blue sky. Wait. That hasn’t happened? That’s right. And Spike Lee has never won an Oscar either. Oh and one doesn’t win an honorary Oscar; one only accepts the Academy’s veiled attempts to wrong their rights. Well, at least with his latest film ‘BlacKkKlansman’, one history has changed. He received his first Best Director Oscar nomination. Lee’s formidable return to the screen with a true-to-life dramatization is based on Ron Stallworth’s memoirs. His career, spanning over more than three decades, has been nothing short of remarkable. His revolutionary debut, ‘She’s Gotta Have It’, registered the Lee trademark as an indomitable force of expression and representation of the African-American community in the industry. The movie launched him into the limelight, something which he has managed to sustain over the years with his exceptional and visionary craft.

Lee’s ‘BlacKkKlnasman’ is a delightfully twisted enigma. A black police officer, the first in the vicinity, reads an advertisement by the Ku Klux Klan, the KKK, and calls to have a conversation. Unintentionally, he reveals his true identity and sets up a meeting. The blunder, as it were, is converted into an infiltration operation, with a white colleague offering to play the black officer. On screen, though, the situation is completely different. Although the film greatly benefits from and gracefully carries the Lee trademark, – — dark, quick-witted, hard-hitting comedy — it offers a closely observed minutia of the American social fabric and race relations. For those of you who are unfamiliar with the nature of the organization and what really makes the premise so intriguing, the KKK is an extremist community of white supremacists, who believe that the American society needs to be “purified” by the elimination of the inferiors. The support to KKK still remains strong, frighteningly growing in numbers.

‘BlacKkKlansman’ does a lot of things right, one of which is the portrayal of this organization. The KKK is not overplayed or exaggerated to sympathize the audience with the victims of its atrocities, but knitted with an intelligent, yet brutish understanding of America’s chequered history of race persecution. Lee scores big with his colorful and relatable characters, who truly are the lifeblood of the film. But what really makes the film stand out is Lee’s unflinching and revolting resolve to tell his story in its purest form, with an endearing reflection of the present through the prism of the past. 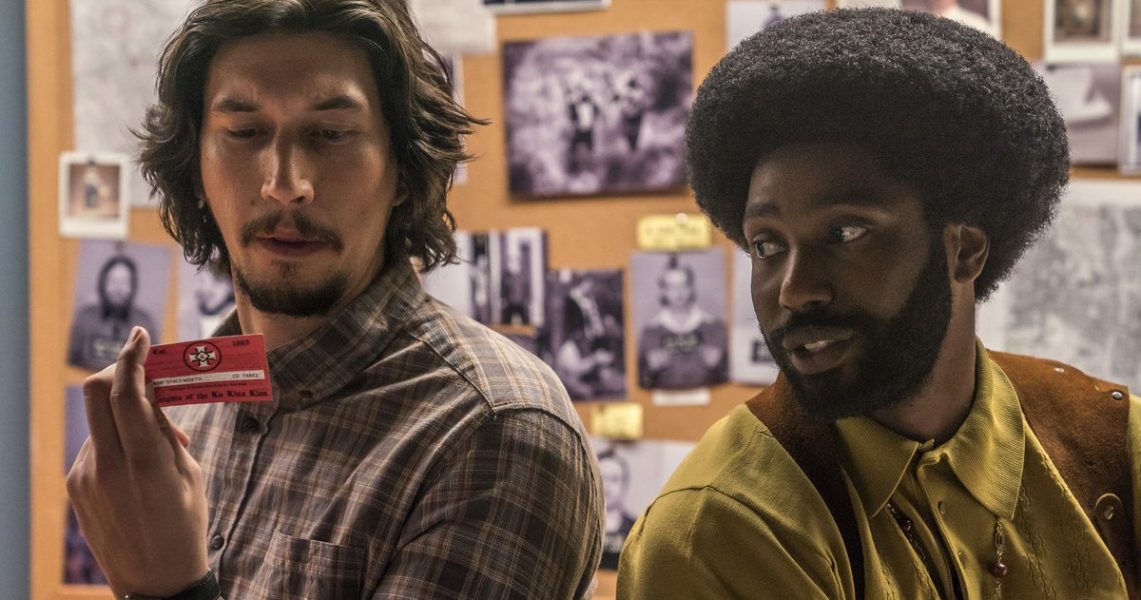 Ron Stallworth is the first black officer on the Colorado Police Force. Ron quickly grows out of his desk job in the records room, being frequented with racial slurs by visiting officers, and yearns for something adventurous. He lodges his interest in working undercover to his superiors, who quickly call a meeting. He is given a low-key task to infiltrate a rally by the local Black Students Union, where noted civil rights activist Kwame Ture is expected to give a provoking speech. He befriends the union president, Patrice Dumas, who is then sexually harassed by a white colleague, Landers, of Stallworth’s as they escort Ture back to his hotel.

After his reassignment to the intelligence branch, Stallworth unassumingly calls Walter, the head of KKK Colorado Springs Chapter, and sets up a meeting. When he realizes his mistake, it is too late. The solution Stallworth works out involves fellow officer, Flip Zimmerman, who is Jewish, posing as Stallworth in the meeting. They join forces and decide to go ahead with the mission. He meets up with the members of the organization, who obliquely divulge an upcoming attack. In the meanwhile, Stallworth starts conversing with the Grand Wizard David Duke, a national level personality, who is worshipped by the members. They form a great rapport, with Duke expediting Stallworth’s induction in the organization, and deciding to come down personally to grace the ceremony. Flip’s cover nearly blows over on several occasions. But, with Stallworth’s support and his training, Flip is able to avoid them.

When Duke comes over for the induction, Stallworth inadvertently gets assigned in his security detail. He reluctantly agrees to do so. When at the ceremony, Stallworth spots the plans of the group to bomb Patrice’s house and immediately proceeds to sentient the police. Connie, who is a member, places the bomb under her car when she notices the patrol cars. A former convict identifies and establishes Flip’s true identity to the group members. They proceed to trigger the bomb themselves and are killed in the explosion. Flip and Stallworth successfully complete their mission. Despite their heroic feats, they are ordered to destroy police records of the same to avoid political repercussions in the future. Stallworth also reveals to Duke of his real identity and finally gets in a relationship with Patrice. 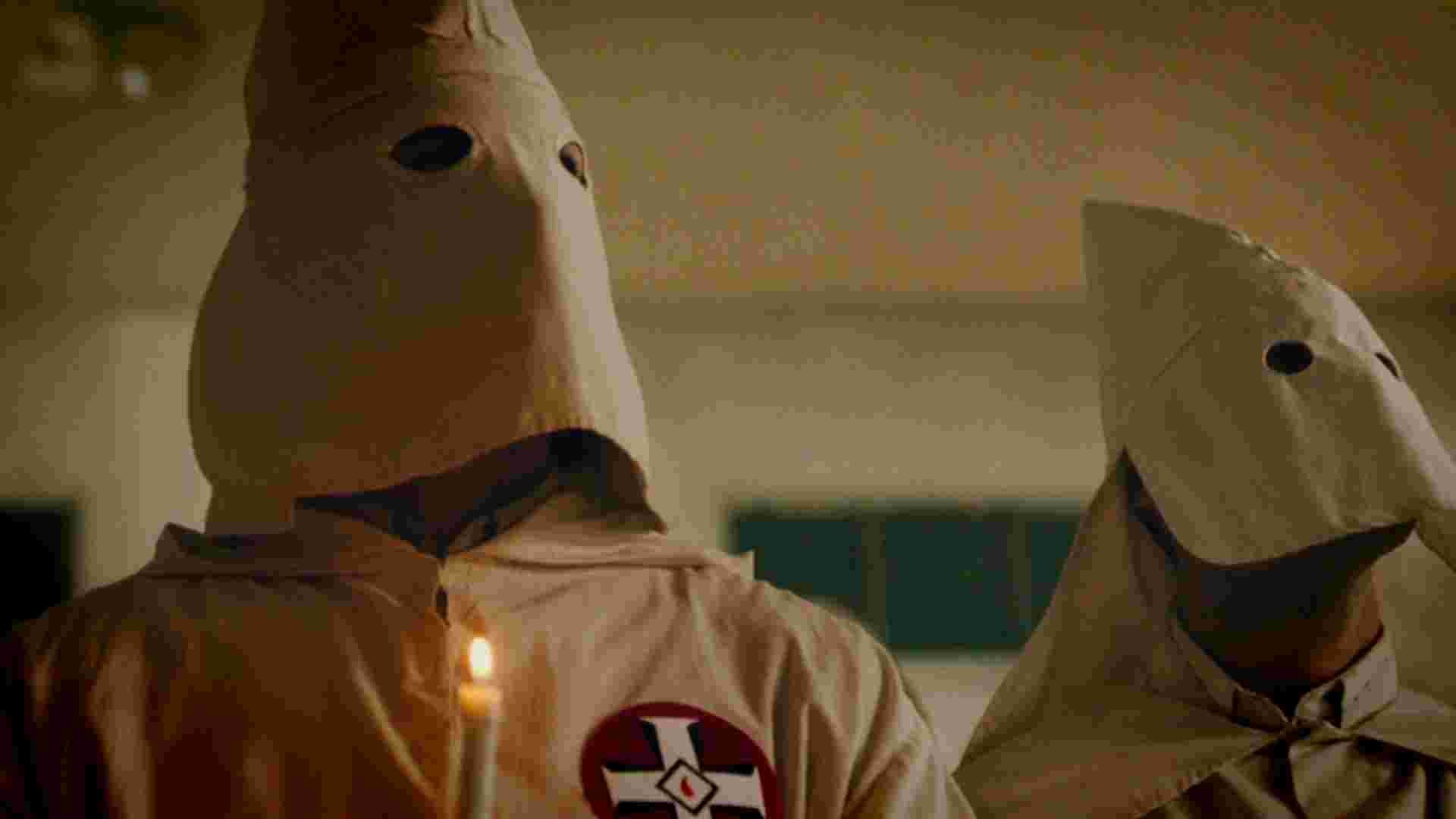 ‘BlacKkKlansman’ heavily draws on events from the past in a bid to put its social message into context. Lee has often included history as an essential part of his social commentaries in previous works. ‘Do the Right Thing’ and ‘Malcolm X’ both featured a solemn recreation of significant events from the past. ‘BlacKkKlansman’, in many ways, is fit to be called a spiritual companion to Lee’s aforementioned works. The essence of this trilogy, if you will, has been a provocative and hard-hitting critique of the modern American society and its functioning within its racial contours. Therefore, it is important to dissect such instances that become a part of Lee’s storytelling narrative. I’ve picked one very important sequence from the film, which is not only significant cinematically to the film, but also historically to the memory of the victims of racial persecution.

The Lynching of Jesse Washington

One of the most harrowing scenes on film in 2018 was the chilling retelling of the lynching of Jesse Washington. Jess was a teenager who was accused of murdering and raping a white woman in the county of Waco, Texas. Before he was mercilessly hung above a bonfire and constantly lowered and raised over it, he was castrated by the mob, who watched the spectacle in a celebratory mood. Many families in the country still house the mass-produced postcards that were distributed as souvenirs after the lynching. The morbid tale is told by American icon Harry Belafonte, also known as the ‘King of Calypso’. Lee uses the tale as a background to Flip’s induction ceremony. The two sequences told in tandem effectively create the contrast in the motivations and desires of the two radical movements. The entire sequence is so emotionally heavy that it almost spills over to the other side of the screen. Good luck holding the tears back. 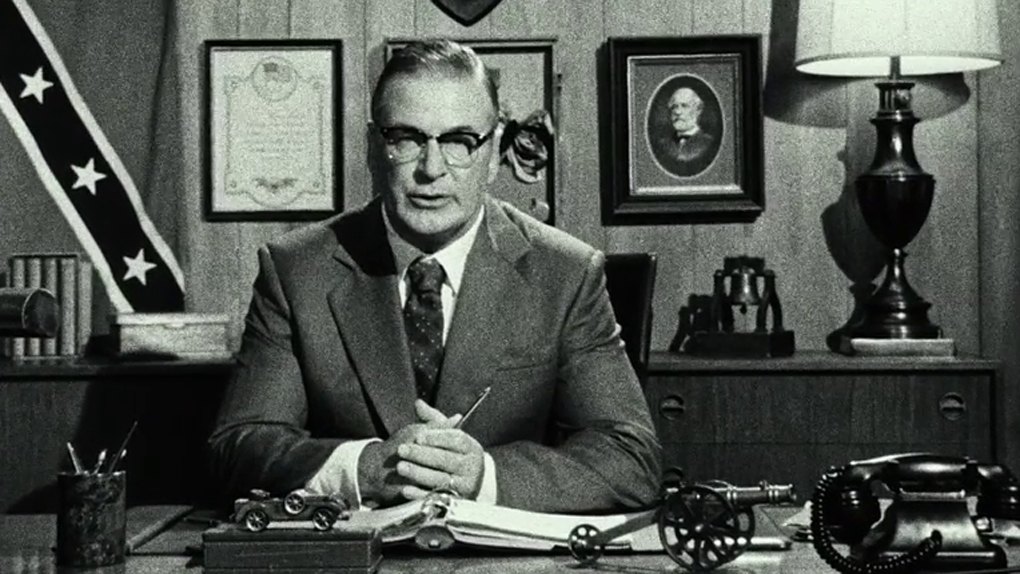 Lee’s quirky style ensures that ‘BlacKkKlansman’ has the right mix of absurd and genius. The opening sequence is wholeheartedly the former. And also the latter. ‘BlacKkKlansman’ opens with a monologue by Alec Baldwin as Dr. Kennebrew Beauregard, a vicious mix of classy suits and leader-like charm. His hate speech, which is beautifully contorted as a rant, is delivered with a reel of documentaries playing over his face. Lee’s visually powerful shot is an insinuation to right-wing ideologists, while also affirming his capacity as a visceral image-maker. The address is hilarious but delivered with a dead-pan face, something which Baldwin flourishes at. The little idiosyncracies he brushes his character with are quite similar to his SNL sketch of President Trump. There is even a moment when Lee creates a Trump-like hologram (if you can see it) with red in the background. Despite being filled with derogatory and racially charged remarks, Baldwin manages to preserve the comical overarch.

If you were puzzled by his address, then Lee can take solace in your bewilderment. The scene was constructed bereft of social satire or achieving piqued cinematic perfection, both of which it inadvertently manages to evolve. My advice to you is this: don’t try to make sense of this sequence, you’d ruin its magical nothingness. 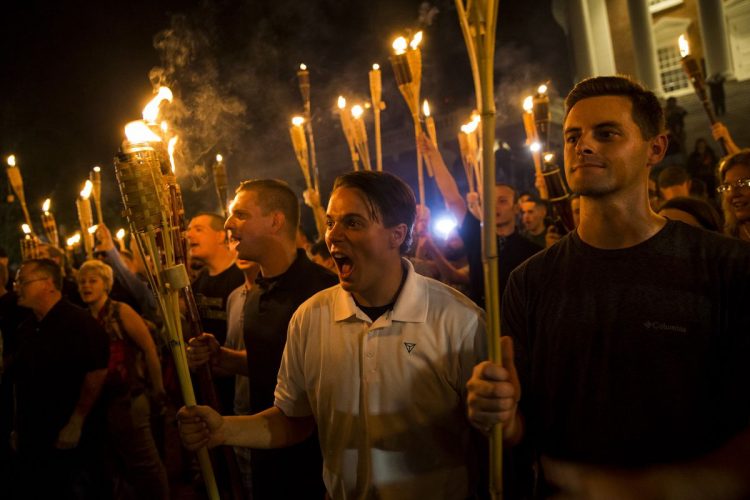 The film’s release coincided with the Unite the Right rally last year. There is also footage from 12 August 2017 from Charlotville where three innocent people lost their lives. The raw footage is a difficult watch. Although it is used in the end, Lee cleverly integrates the current political climate in the States with that of the times the film is set in. The thematic exposition benefits greatly from Lee’s observant and intimate understanding of the societal reality. Since the Trump administration has taken over, there has been a gradual shift in the general perception of people. His arrival has polarized people to accept either one of the extreme ends of the spectrum. Meeting in the middle, or compromise, as the great Abraham Lincoln called it, seems to be a non-existent possibility. In the KKK and the various black upliftment organizations, we get something similar. It is important to understand that Lee attempts to draw an ideological comparison, rather than physical assimilation of the situation. The way people think has not changed. Their bias and prejudices remain intact through the proactive work of organizations like the KKK.

The Charlottesville rally was a big blot on racial solidarity in modern America. The violence and bigotry on display dearly checked us back in time. The situation, which seemed like improving with Barack Obama’s rise to power, and the acceptance of a colored person as the president of the country, suffered a tectonic and fundamental setback. The divide that was gradually diminishing became wider. Lee’s ‘BlacKkKlansman’ instead makes an attempt to bridge this gap through love and compassion. Despite reminding the world and the perpetrators of their transgressions, Lee offers peace; a helping hand. He urges us to endeavor to fashion a society that is built on human empathy but raised with the message of justice and peace. The deeply impactful urgency of the film calls for a change: change which understands the language of love and the value of life.

‘BlacKkKlansman’ doesn’t shy away from its insecurities and ends on a similar note. After his successful mission, Ron reunites with Patrice. While the pair is at his apartment, they hear a sound which draws their attention. Ron draws his gun, so does Patrice, and the two share a silent moment. They proceed towards a faint light that is visible from the frame of the window. On closer inspection, we see a burning cross, surrounded by members of the Klan. A montage of footage from the unfortunate events on 12 August plays out. I don’t think Lee meant much by the ending shot, even if its nature suggests otherwise. The unique shot with Patrice and Ron is something that Lee has done before and is testament only to how important the film is to him. He seems to have regained his long-lost flair.

Having said that, the sequences that follow are certainly designed with a clear message in mind. The barely visible, but glowing light from the KKK burning of the cross, brings Patrice and Ron out to protect themselves. Their skeptical mindset is brought in the context of the Charlottesville rally, whose scenes follow next. The ending propels burning questions of security of the minorities in the States. How long will they be unjustly treated? How long before America realizes that things need to change?

‘BlacKkKlansman’ embodies everything that makes cinema so special: emotional depth, societal outlook, and downright entertainment. It successfully achieves a rare level of technical perfection, along with some chest-thumping moments of fidelity to one constant in the world: humanity. Washington Jr. creates his own brand of acting ergonomics, a special mix of calmness, controlled aggression, and vocal ferocity. He and Adam Driver deliver powerhouse performances, which are bound for recognition in the awards season. Lee’s formidable return to the screen is a grand indication of the changing norms. A modern America must seek its foundations in racial solidarity and cultural tolerance. The world will no longer turn blind to social injustice and atrocities.