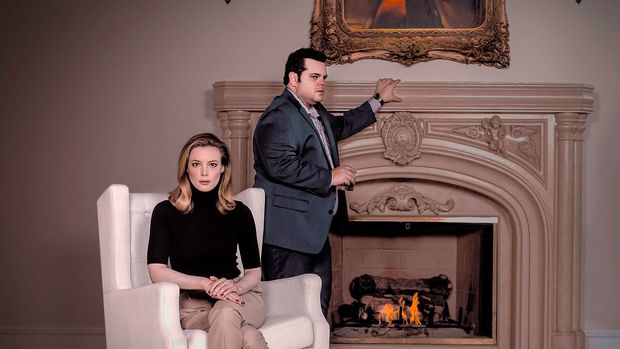 Blood is thicker than water, which might be the root of quite a few problems. At least, this is the crux posited by ‘Blood Ties‘, which has skyrocketed to the top of everybody’s favorite podcast. In case you are of the opinion that you need visuals to drive a message home, give podcasts a chance. They make use of an amalgamation of sounds, coupled with fantastic narration, to narrate unforgettable tales.

In this particular instance, ‘Blood Ties’ is a wonderfully told podcast, set in a particular period, where the story aligns itself as a true-crime tale, despite being scripted. Thanks to the high production value, you can hear the crashing waves, clinking ice, chirping birds, hissing voices, and a rich and dramatic score. Together, it makes for a rich auditory experience, and we have not even gotten to the gripping plot yet.

As two siblings attempt to deal with their parents’ death, they realize that the father might have a darker past than they knew about. ‘Blood Ties’ chronicles the challenges the surviving family members face, as they decide how to cope with this secret.

Since ‘Blood Ties’ Season 1 has skyrocketed to popularity, you might be wondering whether Season 2 is in the works. We delve into that right after we share the show’s details.

Who are the Narrators in Blood Ties Podcast?

‘Blood Ties’ has not held back when it comes to choosing the narrators for the tale. Gillian Jacobs, known for her roles in ‘Community’ and ‘Love’ voices Eleonore Richland, the daughter who has lost her parents. Josh Gad, who came to attention thanks to ‘Frozen‘, lends his voice to Michael, the brother.

Amy Landecker of ‘Transparent‘ fame, is heard as the New York Times journalist, who goes to the siblings with the truth about their deceased father’s dark past.

Jacobs opened up about being in a podcast, saying that she needed to speak much slower so that the audience could get all the information succinctly. In the event of another season, these characters are likely to make a comeback, meaning we will hear Landecker, Jacobs, and Gad again.

What is Blood Ties About?

‘Blood Ties’ is sort of a true-crime riff on shows like ‘Succession‘. It makes use of the current political climate after the #MeToo movement has increased the need for accountability. The story starts with the death of a cardiologist and his wife in a small plane crash in the Caribbean.

While their children, Eleonore and Michael deal with this news, they are approached by a journalist, who claims to know the dark truths of his professional conduct. Now, the decision lies with the children, as they have to choose between two very different paths – they might want to honor their father’s legacy and keep his memory alive as a world-famous cardiologist and health care magnate, or they might choose the truth.

The series is thrilling, with every episode bringing new challenges that the siblings must face, while making their choice.

When will Blood Ties Season 2 Release?

‘Blood Ties’ Season 1 premiered on December 17, 2019, and has six episodes. The season ended on January 14, 2020. As of now, there has been no official news about the renewal of ‘Blood Ties’. That being said, there is no denying that the podcast is well-liked and has garnered a solid fan following.

Considering the stellar voice actors on board, there is a good chance we might get to see another installment. At least Jacobs seems to think so too. She commented, “I think it would be great to do another season. There’s still so much there, the mystery of the season, the characters themselves. Wondery’s created this world I just want to know more about.” However, she also stated that she would not be averse to ‘Blood Ties’ carrying on in another format, like a television show.

For now, we expect ‘Blood Ties’ Season 2 to release sometime in 2021. We will update this section as and when any official information arrives.

Where Can I Listen to Blood Ties?

‘Blood Ties’ comes from Wondery, so the best place to listen to it would be on their official site, here.

Apart from ‘Blood Ties’, Wondery has some fantastic podcasts which you can check out, including the likes of ‘Dr. Death‘, ‘Detective Trapp’, ‘Over My Dead Body’, ‘Life is Short with Justin Long’, and ‘Dirty John‘, among others.

Read More: Most Anticipated Podcasts of 2020