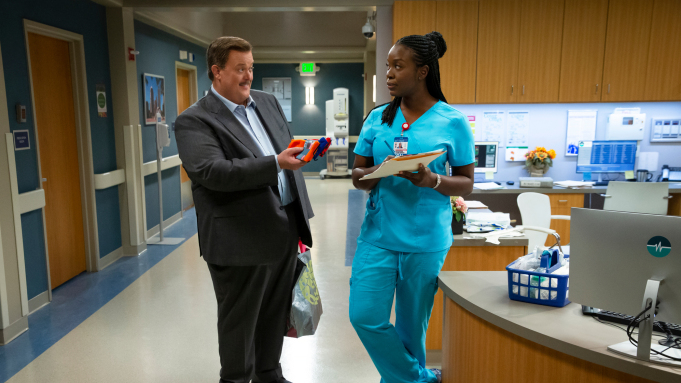 Love is spiritual, complicated, and intimate. But often, the journey toward finding one’s true partner is fraught with complexities, most of them being comedic in nature. And who can showcase this humor-packed ride better than the comedy genius himself? After fans bid a heartfelt goodbye to ‘The Big Bang Theory‘, Chuck Lorre came up with an equally indulging romantic comedy, ‘Bob Hearts Abishola’.

CBS has already confirmed that it wishes to stress on its improvement in diversity with a number of new projects featuring African-American leads. The channel’s long-term goal is to make its programming more representative. As per Thom Sherman, Senior Executive Vice President, Programming, CBS Entertainment, “The shows going on air have a lot of inclusivity and authentic representation and we’re very proud of the work that we’re doing and it won’t stop.”

Billy Gardell stars as Bob, the middle-aged owner of a compression sock factory in Detroit. He suffers a heart attack due to continual business stress and lands in the hospital. Here, he meets a Nigerian nurse and falls in love with her. Gardell has previously starred on ‘Mike & Molly’, ‘Yes, Dear’, ‘My Name Is Earl’, ‘Ice Age: A Mammoth Christmas’, and ‘Sullivan & Son’.

Folake Olowofoyeku plays Abishola, an immigrant from Nigeria and Bob’s nurse, living with her son, aunt and uncle in a small apartment. Christine Ebersole is Dottie, Bob, Douglas and Christina’s mom. Ebersole’s acting credits include appearances in ‘One Life to Live’ and ‘Mac and Me’. Matt Jones plays Douglas, Dottie’s son, and Bob and Christina’s brother. He works in the same business alongside his brother. Jones has previously featured on ‘Breaking Bad’ and ‘Mom’.

Bob Hearts Abishola Plot: What is it about?

Bob is the owner of his family business, a prominent, successful, and competitive sock company, which he runs with his mother Dottie, sister Christina, and younger brother Douglas. However, unable to cope up with the immense stress that comes with the job, he has a heart attack and lands in a hospital. This is where he meets Abishola, a kind-hearted, warm, and diligent nurse. He immediately falls for her and needs to convince her to give him just one chance to prove himself. Since they are completely different people, Bob needs to put in a lot of effort in his quest for true love.

Abishola is a Nigerian immigrant who lands in the US to give a better life to her son Dele, a brilliant, A student. She lives in a cramped, modest apartment along with her super-protective relatives, auntie Olu and uncle Tunde. However, Bob does not care about these constraints, her initial rejection, and diverse background. He simply wants to win Abishola’s heart.

Lending a comedic insight into immigrant lives in America, ‘Bob ♥ Abishola’ features a unique pair of unconventional leads. Additionally, it has all the elements that are a staple of Chuck Lorre hits, including ‘The Big Bang Theory’, ‘Mike & Molly’, ‘Mom’ and ‘Two and a Half Men’. Joined by EPs Eddie Gorodetsky and Al Higgins, the show does full justice of utilizing Gardell’s impressive stand-up experience.

On May 15, 2019, CBS released the first official trailer for the series. You can check it out below. Additionally, you can also visit the show’s official website if you wish to check out clips from the show.