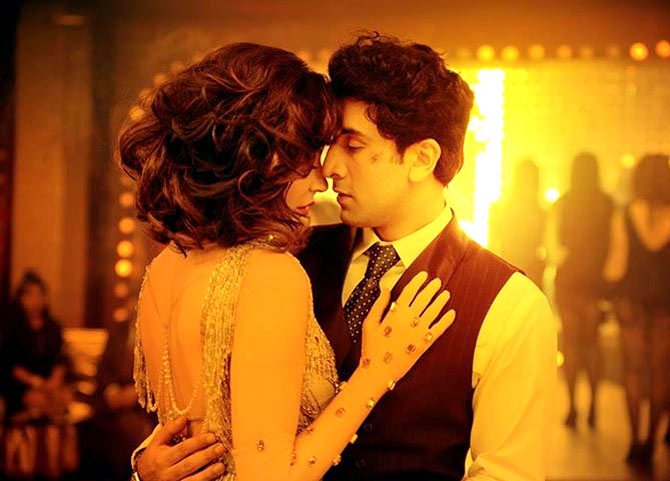 A film which has all the elements of being a blockbuster; promising actors of our times, a distinguished music composer, a renowned director, the right amount of hype and the excitement before its release; you would expect it to be an instant hit. Unfortunately, Bombay Velvet is anything but that. In fact it is the biggest let down of the year.

It is based on Gyan Prakash’s book Mumbai Fables. The movie begins in 1960s Bombay and tells about the story of Balraj (Ranbir Kapoor), a street fighter/boxer who is in love with the jazz singer Rosie (Anushka Sharma). His dream of becoming a “big-shot” in life, leads him to work for Kaizad Khambatta (Karan Johar), a wealthy businessman who offers him to manage his club “Bombay Velvet”. Khambatta, with the help of Balraj, uses this club to further his illegal activities and how further down the road this affects their relationships, leis the crux of the film.

No doubt the concept had the potential but the way it was conceived was undeniably messy. The biggest loophole is the story itself. The incoherent script, disappearing plot lines, poorly sketched characters; all team up to make it a catastrophe. The actors are never given the opportunity to define their existence in the film. Everyone eats into the screen space of the other and the story leads us nowhere. There are way too many plots with very little time emphasized on each of them.

After winning best actor award consecutively for 2 years, there’s no doubt that Ranbir Kapoor is one of the shining stars of our country. However, this role could not do any justice to his capabilities. Hence, even after performing so well, he couldn’t leave a lasting impression on the audience. We also know, after a slew of hits, when it comes to displaying histrionics, Anushka Sharma is no less. However, she restrains herself to just one expression throughout the film. This was supposedly the acting debut of Karan Johar and he did a fine job. To be honest there were glimpses of a hidden talent which demands a better script to show his prowess in front of the camera. One of the few actors who stands out is Satyadeep Mishra, who as Balraj’s friend Chimman steals the shows in the presence of all the biggies.

The film makers claimed that the music in the film will glorify the jazz of the bygone era. Sadly, the music was not only upto the standards of Amit Tridevi, it was mediocre. Apart from two-three songs, rest were forgettable. Not even once during the duration of 150 min, you feel that the director is the same person who’s every single film till date has been ground breaking (including the last year’s outstanding thriller Ugly). All we can hope is that in his next film, Anurag Kashyap would get his spark back and it will be like never seen before.