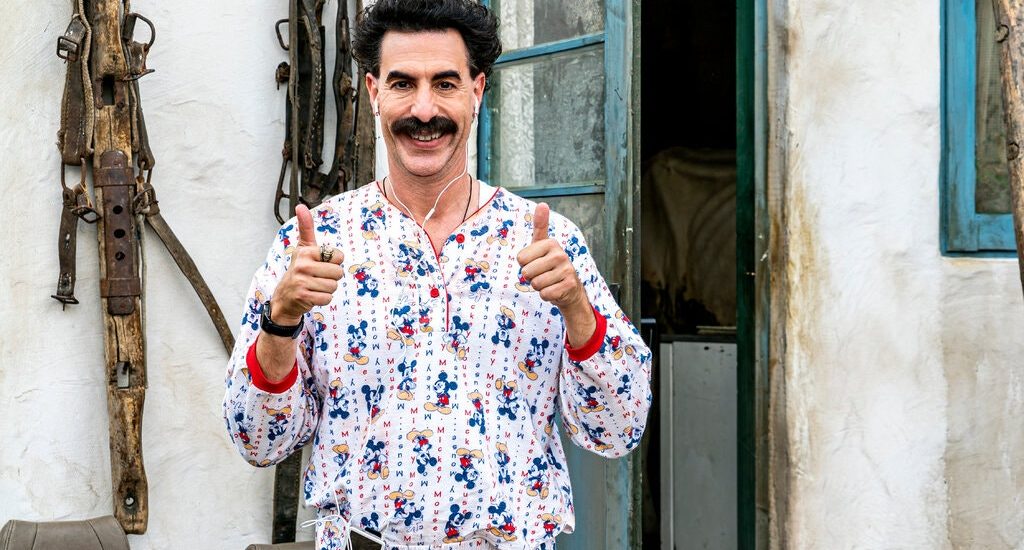 Take a deep breath, because the actual name of the movie is a mouthful: ‘Borat Subsequent Moviefilm: Delivery of Prodigious Bribe to American Regime for Make Benefit Once Glorious Nation.’ For the sake of simplicity, we’re going to refer to it as ‘Borat 2.’ The plot chronicles the eccentric Kazakh reporter as he makes his way across America so that he can give his daughter to Vice President Mike Pence as a gift. The film is exactly as outrageous, lewd, and satirical as one would expect from Sacha Baron Cohen, who plays the titular character. In this article, we take a look at what the ending is all about. SPOILERS AHEAD!

After Borat’s first film – ‘Borat: Cultural Learnings of America for Make Benefit Glorious Nation of Kazakhstan’ – was released, he became very famous. On the other hand, however, Kazakhstan became a laughing stock globally. Due to this, the journalist was publicly humiliated and sentenced to life in a gulag. Now, 14 years later, Borat is taken to the Presidential Palace to meet with Premier Nazarbayev.

Borat sets off on a long journey before he reaches America. When Johnny the Monkey’s crate arrives, the reporter finds that inside it is his daughter. The monkey is dead. So, Borat finds a store that has a fax machine and informs Premier about the situation. The leader tells the protagonist to find another gift or die. They come to the conclusion that they will offer Tutar to the Vice President instead.

The rest of the story chronicles the many adventures of the father-daughter duo as they strive to accomplish the task at hand. But there are so many layers to the film, it’s almost like an onion! Borat and Tutar have their own personal and emotional journeys where they really come into their own, all while exposing the racism, xenophobia, misogyny, and hate in our society.

While living with Jim and Jerry during the lockdown, Borat is able to locate Tutar. She has become a reporter, and in a video, she states that tomorrow, she will be covering the March For Our Rights rally. Borat and his two companions show up there the next day, and the father even ends up on stage after he is mistaken to be Country Steve. He sings a song that defames the former President Obama and questions the coronavirus. Borat even gets the crowd to join in. In the meantime, the two men go to Tutar and tell her that if she doesn’t reunite with her father, then he will be executed, and she agrees.

Borat and Tutar are back on the road, and the daughter calls Rudy Giuliani’s office, pretending to be Grace Sagdiyev from Patriot’s Report. Borat heads over to the babysitter’s house and asks for the ball and chains he left behind. She returns the possessions and even gives him a toy figure (that resembles Borat), which belongs to Tutar. On seeing this, the journalist says that he feels pain in his chest, and the lady says that giving Tutar to an old man as a gift should make him hurt. Realizing that he cares for his daughter a lot, Borat heads over to the hotel where Tutar interviews the former Mayor of NYC.

The conversation between Tutar and Rudy Giuliani flows like butter, especially since she has a shy disposition. She also places her hand on his knee from time to time. Borat interrupts by pretending to be the boom operator in an effort to cut short the interview and save his daughter. He states that the equipment is not functioning properly. However, Tutar makes Borat leave the room. She then tells him that she will continue with the interview because she doesn’t want her father to be executed.

Following this, both Tutar and Rudy move to the bedroom with their drinks. Right as the politician is in a compromising position, Borat jumps out, wearing nothing but a pink lingerie set, and says that the girl is 15. The interviewee is aghast about the whole situation and leaves the room. Then, a very happy Borat and Tutar run from the hotel and escape into an alley. She expresses that he loves her as much as his sons. But the father disagrees and says that he loves her even more than them. This sweet moment is cut short when the future is discussed.

Borat says that he will return to their homeland and that Tutar should live in America and pursue her dreams. However, she chooses to go along with him. Back at the Presidential Palace, in Premier Nazarbayev’s office, Borat reads out his final will and testament. But the leader has decided not to execute him and says that everyone makes mistakes. Borat is a little surprised but relieved. Just then, Tutar studies her surroundings to find that Nazarbayev is responsible for the creation of the virus and that Borat is the man who was chosen to spread it from the very beginning. Giving a gift to the Americans was just a ruse.

Borat confronts the Premier, who says that the plan worked perfectly. After all, this is revenge for the whole world laughing at them. But what the leader doesn’t know is that Brian has been on FaceTime this entire time and has recorded the conversation. Nazarbayev asks them what they want in exchange for their silence. Three months later, Kazakhstan has become a feminist country “like the USA and Saudi.” Instead of brides, they now export grooms, and one package is being shipped to Kevin Spacey as well.

Furthermore, the hotspot on Borat’s phone has given them access to the internet, due to which they can also influence international elections now. Borat is the 4th best journalist in the country, with Tutar beating him at #3. Instead of Jews, “the Yankee” is seen as the biggest threat to Kazakhstan. In the end, there is a “Running of the American.” First, a man with a burger in his hand is seen sneezing on people. Then comes out Karen, who is wearing an “All Lives Matter” t-shirt.

A figure that seemingly represents Dr. Fauci and has a vaccine in his hand also appears, but he is gunned down by Karen with an AR-15 purchased from Walmart. An announcement on the screen reads: “Now vote or you will be execute.” There is also a dedication to Judith Dim Evans.

Rudy Giuliani is not only the former mayor of New York, but he is also Trump’s personal lawyer. But right now, the compromising position that he is seen in is the talk of the town. He released a statement on Twitter stating that he was nothing but cordial and professional throughout the whole interview. He thought it was simply a documentary about Trump’s handling of the pandemic.

(1) The Borat video is a complete fabrication. I was tucking in my shirt after taking off the recording equipment.

At no time before, during, or after the interview was I ever inappropriate. If Sacha Baron Cohen implies otherwise he is a stone-cold liar.

Talking to New York Times, Giuliani gave his side of the story as well. “I had to take off the electronic equipment. And when the electronic equipment came off, some of it was in the back and my shirt came a little out, although my clothes were entirely on,” he said. “I leaned back, and I tucked my shirt in, and at that point, at that point, they have this picture they take which looks doctored, but in any event, I’m tucking my shirt in. I assure you that’s all I was doing.”

Following the controversy, Borat put out a video on Twitter as well. In it, he says, “I here to defend America’s mayor Rudolph Giuliani. What was an innocent sexy-time encounter between a consenting man and my 15-year-old daughter have been turned into something disgusting by fake news media. I warn you: anyone else try this, and Rudolph will not hesitate to reach into his legal briefs and whip out his supenis.” You can check the video out below!

The Dedication to Judith Dim Evans

Judith Dim Evans appears in the film when Borat goes to the synagogue. There, she talks about the Holocaust and how real it was. In real life, Judith was just a child when World War II occurred. She was born on August 25, 1932, in Beuthen, Germany, and was raised by a single mother and grandmother. During the war, her mother was sent to the Ravensbrück concentration camp, following which, her grandmother was made to live in a ghetto where she ultimately died. Eventually, Judith and her brother went to an orphanage, which was operated by nuns. As a teen, she fought for the independence of Israel as well. Unfortunately, she passed away after the movie was filmed. 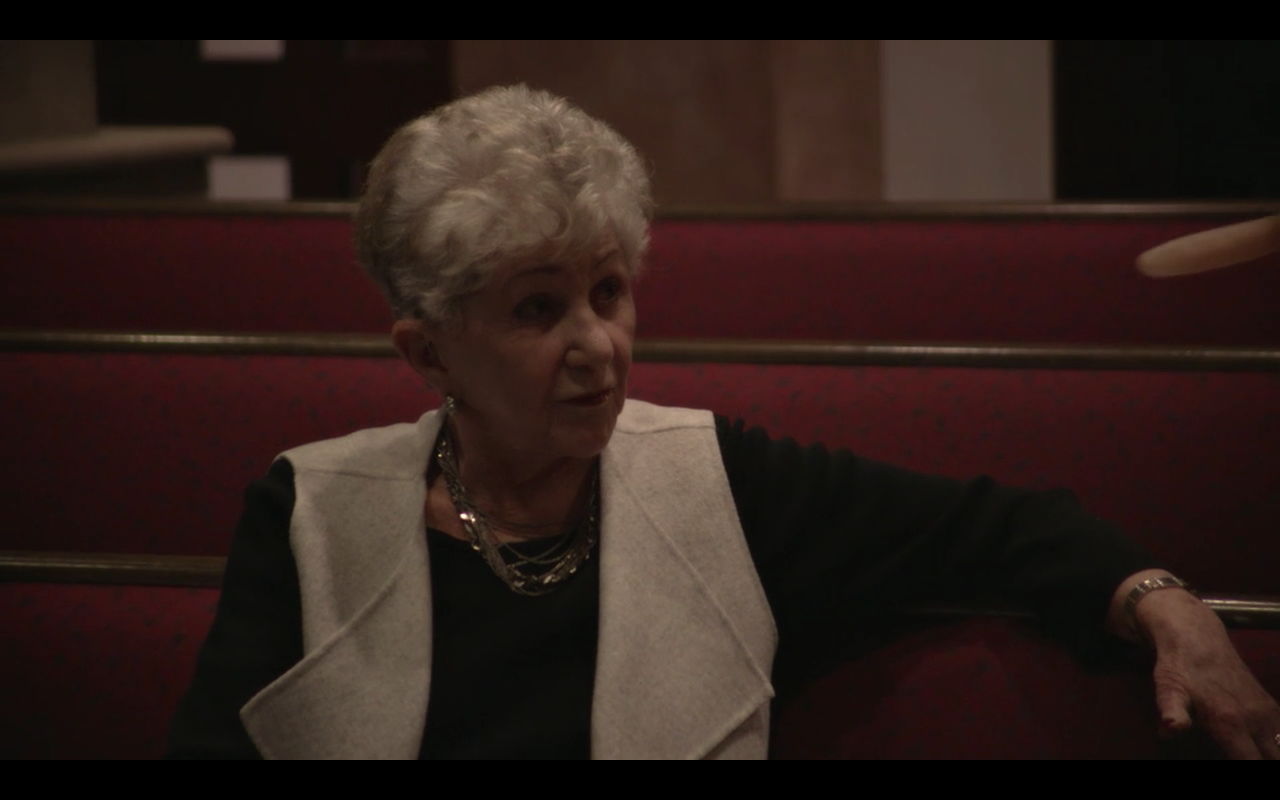 Judith’s daughter has sued the producers of the movie and Amazon Studios to get her mother’s appearance in ‘Borat 2’ removed. The lawsuit read, “Upon learning after giving the interview that the movie was actually a comedy intended to mock the Holocaust and Jewish culture, Ms. Evans was horrified and upset. Had Ms. Evans been informed about the true nature of the film and purpose for the interview, she would not have agreed to participate in the interview.” It further stated that the producers offered the mother and her friend monetary compensation.

For a movie like ‘Borat 2’ to work, most pranks and scenes are not scripted. After all, the magic lies in the genuine reactions that people give. Sacha Baron Cohen also doesn’t break character often. In fact, while living with the two men during the lockdown, the actor continued to live as Borat for five days. He cited this as one of the most challenging things he’s ever had to do. However, for the scene in the synagogue, he revealed his actual identity to be respectful and explained that the jokes were not to mock their beautiful culture. (Cohen is also Jewish). 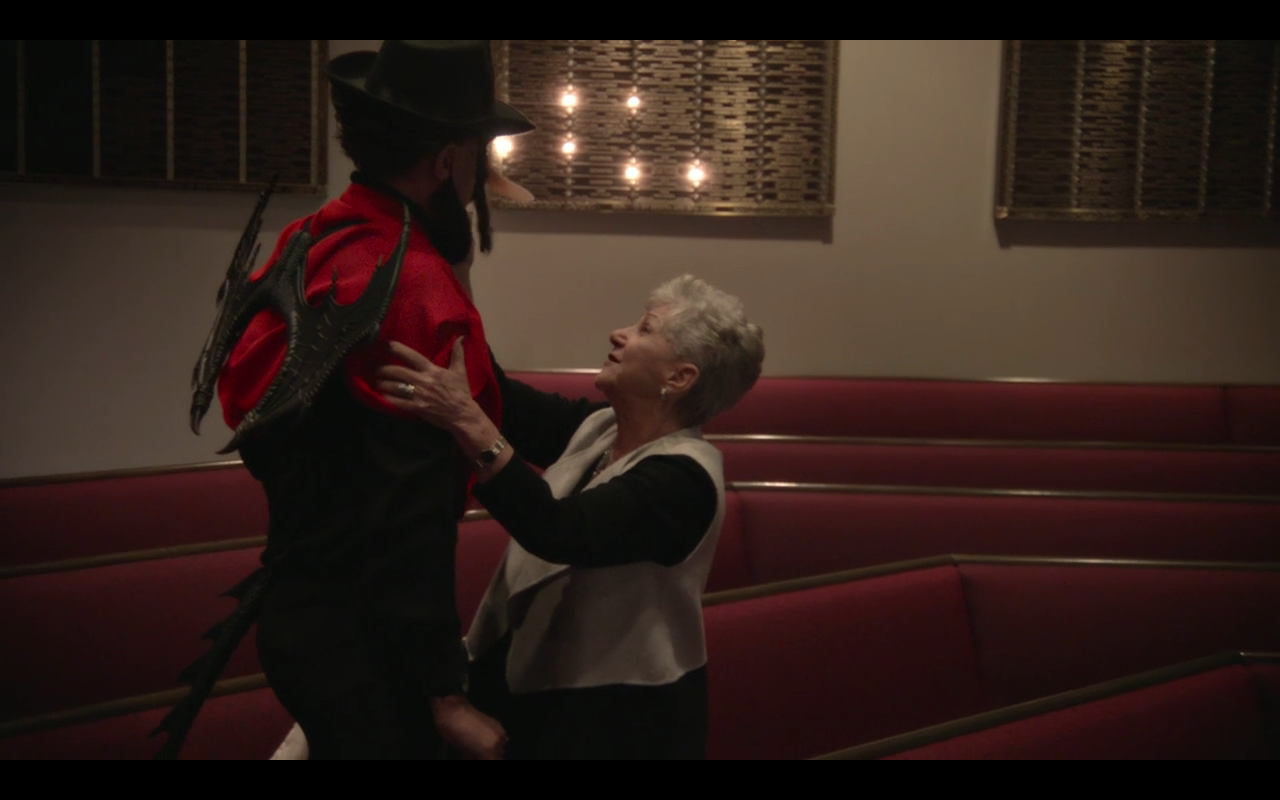 Reportedly, there is also footage that captured this moment. The attorney representing the estate, Adam L. Hoipkemier, said, “We have made multiple requests for any footage of Ms. Evans, and the producers have refused to provide it. We do not have any further comment regarding Mr. Cohen’s characterization of his conversation with Ms. Evans until we are able to review the film.”

Read More: Where is Borat 2 Filmed?