‘Borat 2’ is the newest addition to the franchise in which the titular Kazakh journalist wanders across America to learn more about the country and its people. But this time, Borat has a more important mission to accomplish. After all, he wants to gift his daughter to Vice President Mike Pence. Starring Sacha Baron Cohen and Maria Bakalova, this political satire highlights a poignant reality. If you’re curious about where the movie was filmed, then this article is for you!

The states of South Carolina, Maryland, California, Georgia, and New York were used to shoot ‘Borat 2.’ In fact, it started filming before the pandemic occurred. Cohen even stayed with two conspiracy theorists in a cabin for five days without breaking character even once.

Speaking about his companions, the actor told New York Times, “They’re completely different to the politicians who are motivated by their own power, who realized that they can create fear by spreading these lies through the most effective propaganda machine in history.”

‘Borat 2’ follows a mockumentary format, and most people didn’t really know that Cohen was shooting for the film. In fact, this was a routine practice for many scenes that have made to the final cut. The two locations used in the state were Greenville and Spartanburg. First up was the store named Halloween Highway, and its exact address is 333 N Pleasantburg Dr., Greenville. The cast and crew simply showed up and asked for permission to shoot. When questioned about the name of the movie, they decline to give out this information.

However, the store accommodated the team, and it was the employee, Paul Holzberger, who is seen accompanying Borat as he buys a fat suit and asks if Harry Potter is a sex criminal. An employee stated, “They gave me a paper to sign that didn’t even have a name of the movie on it. I spoke with a woman named Mary, while the guy walked around with Paul trying on costumes. Paul said he was acting goofy the whole time, so we just figured the movie was about that.”

The city of Spartanburg also makes an appearance on the list of filming venues. We see the First Baptist North Spartanburg, which is actually located at 8740 Asheville Hwy. Located at 210 Westgate Mall Dr., Spartan Bakery is a part of in the film.

There is a scene where Borat, disguised as President Trump, goes to a rally where the Vice President, Mike Pence, is giving a speech. On his shoulder, he is carrying his daughter. Borat interrupts the government official and shouts, “I brought the girl for you.” Well, this scene was actually filmed at a Conservative Political Action Conference (CPAC) hosted in February 2020 in National Harbor. It is imperative to note that Cohen did not disclose his real identity at the event. 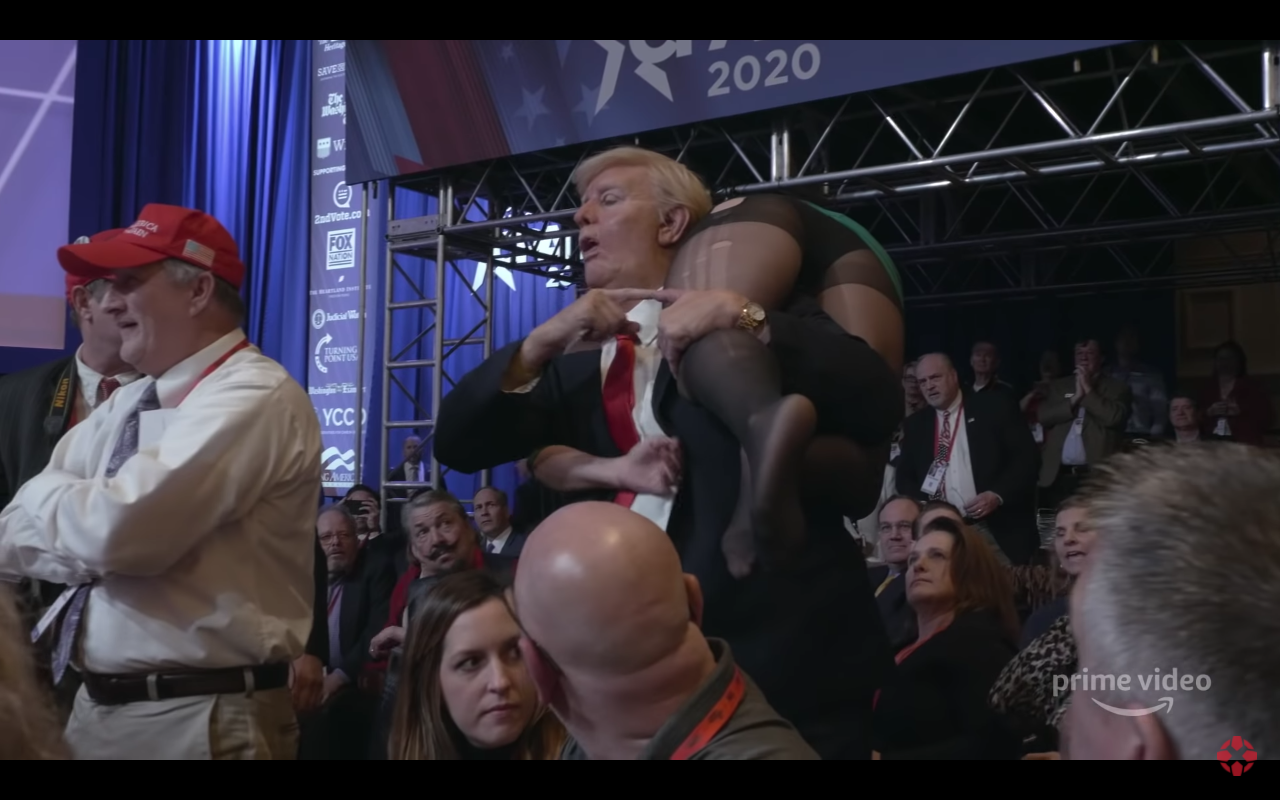 The Hay House in Macon makes for the beautiful backdrop against which Borat and his daughter continue their lewd behavior during a cotillion. The scene where she dances while lifting up her dress was filmed here before the pandemic started. Will Davis, a publisher, and his daughter were present there that evening. He said, “The company would pay fathers and daughters $50 apiece, and all we had to do was dress up, dance a little and enjoy free cuisine and drinks at the beautiful antebellum Hay House in downtown Macon.”

THESE PEOPLE IN MACON GA THOUGHT THEY WERE GOING TO A COTILLION FOR A NORMAL MOVIE FILMING AND IT WAS BORAT 2!!! https://t.co/sz77uuxY62

Davis also said that the father (referring to Borat) was quite an odd fellow who would use a Georgian-English dictionary while trying to make his point. The publisher continued, “My precious daughter and I walked out into the cool Macon night with mouths agape wondering what had just happened.” Apart from this, there is a scene where the Lilburn police stop Borat because his daughter is traveling on the top of his vehicle.

In the movie, Rudy Giuliani, the former Mayor of the city, is interviewed by Borat’s daughter, who is posing as a TV journalist. But he lies on the bed and is (seemingly) tucking his shirt into his pants. Then, Borat jumps out in a pink outfit, informing the politician that the girl is underage. (In real life, Maria Bakalova is 24-years-old).

This compromising position was discussed on social media recently, and Giuliani said, “I am tucking my shirt in, I assure you, that’s all that I was doing. At no time before, during, or after the interview was I ever inappropriate. If Sacha Baron Cohen implies otherwise, he is a stone-cold liar.”

(1) The Borat video is a complete fabrication. I was tucking in my shirt after taking off the recording equipment.

At no time before, during, or after the interview was I ever inappropriate. If Sacha Baron Cohen implies otherwise he is a stone-cold liar.

Most pranks that we see in the movie were actually filmed without disclosing Cohen’s identity. In fact, many people are unfamiliar with the character of Borat as well. However, on social media, there is a video of the obnoxiously loud journalist driving around in a pale yellowish-green pickup truck on the streets of Los Angeles. In another post on Instagram, David Dobrik (the YouTuber) is seen hanging out with Borat.

Read More: Are The Borat Movies Real or Fake?