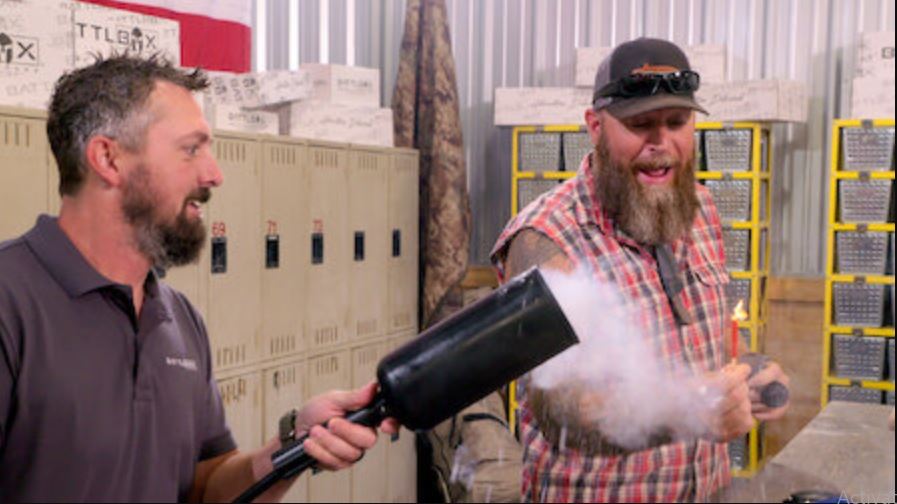 Netflix’s description for ‘Southern Survival’ is honestly very fitting: “Laugh along as the BattlBox crew prepares for the worst, testing products designed to help people survive dangerous situations, including explosions, natural disasters, and intruders.” And, thanks to the extremely entertaining cast members, laugh we do.

While testing the gears that they have, they put themselves and their loved ones in extreme scenarios while still making light of it by teasing each other. And, one member of the team, who tries to provoke the others the most, all in good fun, of course, is Brandon Currin.

Who Is Brandon Currin?

Brandon was referred to as the in-house survivalist of BattlBox, but that is an extreme understatement – owing to all his work experience, he actually works as the Vice President of Marketing in the company. Before Brandon worked in BattlBox in Georgia, he lived in North Carolina where he was a successful videographer, editor, and producer. He was the General Manager and Co-Host for ‘Pass’n it on Outdoors’ and was the man behind some of the videos for Dry Creek Productions.

Got some rough cuts done this morning and a few other tasks…… now it's time for some pew pew pew. #currin1776 #battlbox #bbqbox #editing #work #pewpewpewtime

In 2013, he opened up his own production company by the name of Currin Productions and two years later he started a YouTube channel. He was looking for some fresh content, and that’s when he came across BattlBox. It matched his interests, it looked good to him, and it was all very legit, so he got in touch with them, packed up his bags and moved his family from North Carolina all the way to Statesboro, Georgia.

LAST CHANCE! Give the gift of BattlBox this Christmas. There is no better gift than a BattlBox! Pick one of the prepaid, non-renewing subscriptions at any level and choose 6 or 12 months. Order now so they arrive in time! Check them out Below https://www.battlbox.com/pages/gifts #battlbox #hunting #giftbox #christmas2018 #christmas #stockingstuffer #lastminutegift #giftsforhim #medic #likeforlikes #medical #firstresponder #police #firefighter #emt #edc #everydaycarry #camping #camp #outdoors #thegreatoutdoors #camper #campfire #subscriptionbox #worldsbest #bestsubscriptionbox #thebest #subscribe #adventure #currin1776

Since then, he has been the face of the company. He knows what it means to be behind and in front of the camera, and he understands all the technicalities that go behind a successful marketing scheme. The resident redneck’s hard work for the company is one of the reasons why it is so successful at this point, and the fact that he is always fun to be around is just a major plus.

From the looks of his Instagram, it seems like Brandon posts a lot about his personal life, but that is not entirely true. He keeps almost everything for major significance away from the public spotlight, at least to some extent. While we know that he has been married to his wife, Katie, for quite some years, we do not know when exactly they got married or even when they initially started dating, because Brandon never posts something to celebrate their anniversary or any milestones that could clue us in.

We saw Brandon’s “Baby Girl,” Lyla Grace, on ‘Southern Survival,’ but he has two other kids as well, sons, Rylan and Jace. Jace seems to be the oldest, followed by Rylan, and then comes the baby of the family, Lyla.

The Kids are enjoying their Christmas. Looks like Baby Girl is a bit more than the boys are. 💪🏻 #currin1776 #currin1776homestead #honda #hondarancher #dirtroadlife #rurallife #fourwheeler #mud #shefoundsomemud

While Lyla and her dad connect over their love of animals and their homestead, it seems like Rylan connects with Brandon over sports, being a football and basketball player, and Jace, he connects with him over music. Fishing seems to be a big thing with the family as well.

Stopped for some Wings with a couple of the kiddos after Rylan’s Basketball game. Too bad he’s on the bus…. #currin1776 #wings #eatingwings #saturday #georgia