Where Are Brian Mitchell and Wanda Barzee Now? 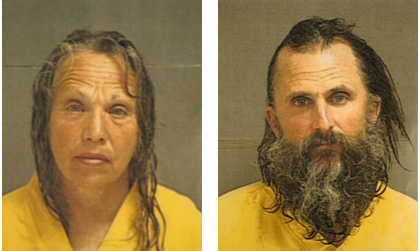 Elizabeth Smart’s kidnapping case is known nationwide, not only because of it’s gory details but also because of what the survivor was able to turn her life into after the rescue. From being a victim to being a child safety activist, an advocate for missing persons, and a journalist, her story is invigorating. We even saw a glimpse of her head-strong nature on the Lifetime special ‘Elizabeth Smart: Finding Justice,’ the companion documentary to ‘A Murder to Remember’: a movie that brought light to another kidnapping case like hers.

Elizabeth was kidnapped by Brian David Mitchell and his wife, Wanda Eileen Barzee, back in 2002. She was rescued 9 months later, on March 12, 2003, and her captors were arrested right there and then. Since it’s been over 17 years, some things have, unfortunately, changed, so here’s where they are now.

Where Are Brian Mitchell and Wanda Barzee?

Brian David Mitchell was born on October 18, 1953, in Salt Lake City, Utah, in a Mormon family. Apparently, to teach him about sex, his father, a social worker, showed his adolescent son explicit photos from a medical journal. Brian was just 16 when he was arrested for the first time, for exposing himself to a child. At 19, he married a 16-year-old girl named Karen Minor. After their divorce, Karen got complete custody of their two kids because Brian had temporarily kidnapped them and fled to New Hampshire.

He found faith while he was living in New Hampshire, and left his drug and alcohol abuse habits behind when he got inspired by one oh his brothers, who had recently returned from a mission of The Church of Jesus Christ of Latter-day Saints. He remarried and had two more children, but his second wife, Debbie, divorced him in 1984, alleging abuse. After that, she claimed that he had sexually assaulted their three-year-old son. Even one of her daughters from her previous marriage claimed that Brian had sexually abused her for four years. On the day his second divorce was finalized, Brian married Wanda.

Wanda Barzee, a mother of six children herself, had a troubled relationship with each of them. One of daughters even called her a monster and alleged that when she was little, Wanda had fed her pet rabbit to her for dinner. Together, the newly married couple joined the LDS Church. When Brian started going by the name “Immanuel” and claimed that he was a prophet of God who had visions, he was excommunicated from the Church. Wanda started going by the name “Hephzibah,” and together, the two began preaching in downtown Salt Lake City, that is, until 2002, when they kidnapped Elizabeth and started moving around.

Where Are Brian and Wanda Now?

Although the couple was arrested and charged with kidnapping and child endangerment in 2003 itself, their cases didn’t go to court for a long time. They were both to undergo competency evaluation before they could stand trial in court. In 2006, when a bill in Utah allowed prosecutors to forcibly medicate defendants to restore their competence level, a judge approved Wanda’s medication. Wanda ultimately pled guilty and was sentenced to 15 years in state and federal prison. In 2016, she moved from the Federal Medical Center, Carswell in Fort Worth, Texas, to the Utah State Prison in Draper, Utah. Then, in September 2018, she was released, which Elizabeth was obviously not happy about.

The past few days could certainly be described as shocking. Only a couple months ago I was informed one of my captors, Wanda Barzee, would not be released until 2024. Now she will be released in less than a week. I find this news greatly disturbing and incomprehensible. In my efforts to learn more it seems there are no viable legal options open to me at this time. So it is now that I ask those that have the power, and her family to start proceedings to have her be civilly committed. To my knowledge she has neither complied with medication or treatment and as some one who has experienced first hand just how depraved she truly is, I believe her to be a threat and a danger not just to myself but to the community, any vulnerable person. I am very concerned and precautions have been taken however I refuse to live in fear. I have spent the last 15 years rebuilding and moving forward with my life, having a family, and pursuing my goals. I lived in absolute fear and terror for nine months, no matter the outcome I will not do so again.

According to The Salt Lake Tribune, Wanda is currently serving her five years of federal supervised release while residing a few blocks away from Parkview Elementary School in Salt Lake City. As a sex offender, although the State of Utah prohibits her from stepping foot on any school ground, her release guidelines don’t seem to set the limits on how close she can live to one.

For Brian, the proceedings took even longer. On December 12, 2008, it was reported that he couldn’t legally be forcibly medicated by the State of Utah. So, he had to be proved medically competent to face trial. After years of reviews and interviews, a doctor diagnosed him with non-exclusive pedophilia, antisocial personality disorder, narcissistic personality disorder, malingering, and alcohol abuse in a controlled environment. And, the defendant’s doctor maintained that Brian also had a delusional disorder. Brian was deemed competent to stand trial on March 1, 2010.

When his trial began, the defense said that Brian was, in fact, responsible for the crimes, but argued that he was legally insane at the time, and thus, should not be found guilty. The insanity plea was rejected, and the judge and jury found him guilty of kidnapping and transporting a minor across state lines with the intent of engaging in sexual activities. Therefore, he was sentenced to serve two life terms in federal prison without the possibility of parole. Currently, Brian Mitchell is behind bars, incarcerated at the United States Penitentiary, Terre Haute, a high-security federal prison in Indiana. (Featured Image Credit: Salt Lake City Police Department)