Where Are Brie Bella and Daniel Bryan Now? 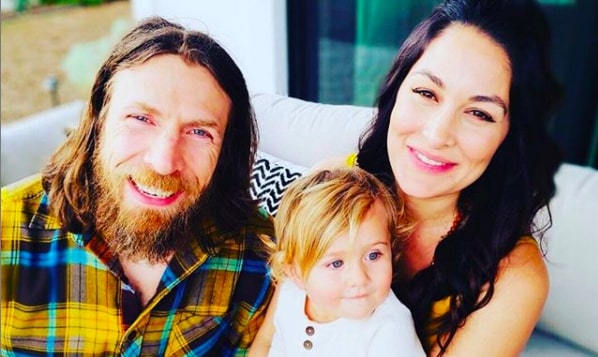 The former WWE stars got married in 2014 after they had been dating for a while. It was Bryan who proposed to Brie. After a few years into their marriage, they had their daughter Birdie in 2017. It was later reported that the couple also struggled to get pregnant a second time. In an interview in 2019, Brie said, “We were trying for eight months, and I couldn’t get pregnant. I was stressed, and it wasn’t happening.”

In any case, Brie is pregnant once again now. And whether it be a coincidence or not, her sister Nicole is pregnant too! The two are now hand in hand on their pregnancy journey together. While all this is great, what has been a little off is the relationship between Brie and Bryan.

The two have been facing some issues for quite some time now. In the recent episode of ‘Total Bellas,’ we witnessed the possible reasons as to why the two were having problems in the first place. The couple more or less retired from their wrestling careers in 2016. While Daniel had suffered certain injuries that made it difficult for him to get back, Brie decided to stay back to spend more time with her family. Their journey since they met has seen its own share of ups and downs. Now, Brie is an entrepreneur, and her being busy with work has been quite a bit of a set back for Bryan.

Brie Bella and Daniel Bryan: Are They Still Together?

Yes, it seems like they are still very much together. While there have been some rumors about their relationship, it is only fair to say that it doesn’t look like they have split up. In a recent interview, Brie did admit that there are problems in her relationship. She said: “It’s funny because I didn’t think this season we were going to delve into my marriage… and I realized actually how in trouble my marriage was.” But she also confessed that she is learning to balance being a mother and a wife at present. So, we can take solace in the fact that they are putting effort into their marriage.

Bryan and I admire the passionate pictures @thenikkibella puts up of her and @theartemc so we thought we’d post our very passionate picture of our marriage…. after 9 years together nothing like gelato, Netflix and bed before 10pm. Don’t miss our journey of passion this Thursday April 2nd on @totalbellas 9/8c only on E!

However, it wasn’t all great for a long time. It was laced with concerns than anything else. First was Brie and Bryan not being to get on the same page about Brie wanting some time off on her own to focus on her business. While Daniel stated that they had previously agreed to a simple life, Brie cut the conversation by saying that they are by no means a normal couple with a normal life.

It more or less felt like Bryan was disappointed at the fact that they don’t really get to spend time together. It was made more so evident in the recent episode where Brie told Nicole and Artem that they could stay with them for three more weeks till their housework is done. Bryan then spoke to the camera about how Nicole staying becomes a problem when it is all the time. Then he reinstated what he believed to Brie. He told her that, “… I think mostly because you don’t care if we get alone time or not.” After a more discouraging conversation, Brie said, “I feel like Bryan and I are drifting further apart, and we both look at relaxing differently, and I can tell it bothers him.” In any case, it seems like they are now working on their problems.

Brie Bella and Daniel Bryan: Where Are They Now?

A very much pregnant Brie keeps posting pictures of both Birdie and Bryan. Birdie is present in almost all of her posts.

Bird and my Belly are growing to fast🌻

The family also seem to be living their quarantine life by staying put. They also continue to promote ‘Total Bellas’ in many of their posts.

Birdie is VERY excited about Total Bellas series premier tonight! Check it out at 9/8c on e!

Bryan’s posts, too, show that the family is happy together. He also seems excited about the sisters’ new book, ‘Incomparable’ which is a co-authored memoir by the two.

Happy Publishing day to my wife! So proud of her and @thenikkibella for telling their story… you can see how I fell in love with @thebriebella! Go pick it up wherever books are sold!

“We wanted to be survivors.” Watch this video of me reading an excerpt from our audiobook #incomparable available now from @SimonAudio 📕🎤 You can also head to @audible @applebooks & @GooglePlay to download! 👯‍♀️❤️☺️N pic.twitter.com/ngyiT2RJRj

In any case, the two sisters and their family’s dramatic course of events definitely do not end here.