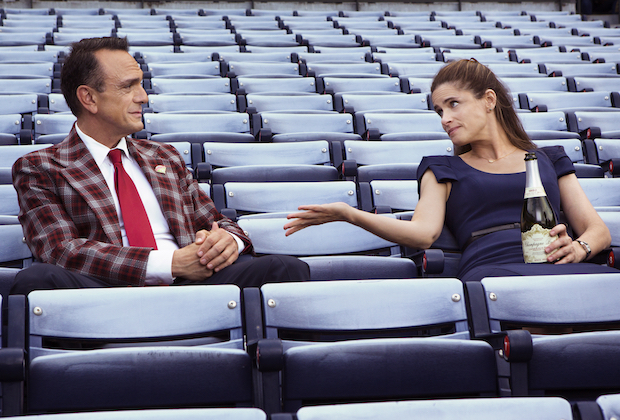 If you enjoy your sports shows with a tinge of comedy, then look no further than ‘Brockmire‘. The series stars Hank Azaria as a play-to-play baseball announcer. Over the seasons, we have seen Azaria portraying the titular Jim Brockmire, who used to be a major league baseball announcer.

However, following the news of his wife’s infidelity, he has a very public, very embarrassing meltdown. Eventually, Brockmire decides to rebuild his life and reputation. Currently, we are at the start of, what has been touted as the show’s final season. Naturally, you must be curious to find out what transpires during the season premiere. Not only are we here to tell you that, but we also promise to walk you through when and where to watch the upcoming episode.

Brockmire Season 4 Episode 2 Release Date: When Will It Premiere?

‘Brockmire’ Season 4 Episode 2 is slated to be released on Wednesday, March 25, 2020, at 10 PM. Titled “Three Year Contract”, the episode sees Jim trying to bring some changes in the league. However, the owners do not seem to be too eager to accept the same.

If you are a cord-cutter, you are essentially spoilt for choice. Pick between Fubo TV, Philo TV, YouTube TV, or DirecTV. You can also stream the latest episodes on Sling TV. If you are a Hulu subscriber, you should be getting Season 4 of the show soon. In the meanwhile, you can watch up to Season 3 of ‘Brockmire’.

As for Amazon Prime subscribers, you should be able to buy and stream the latest episodes eventually. For now, you can only access up to Season 3 of ‘Brockmire’.

‘Brockmire’ starts the new season with a dystopic portrayal of the world. The year is 2030, and we find that earth has been ravaged by problems such as water shortages, and national fractures. Amidst this, cricket seems to have taken over baseball in terms of market share in the US.

To worsen situations, companies are offering quick cash, in a scenario where ethics have gone for a toss. The season premiere portrays how quickly we get adjusted to catastrophe, as characters nonchalantly use the phrase ‘The Disputed Lands’, to denote the region around Arizona.

Amidst all this, Brockmire remains the same, as a commentator. However, now, his priorities have shifted, and he is much more protective of his daughter. Our central character is not just sober, but sobering to watch as well. Brockmire is now the commissioner of Major League Baseball and must juggle its responsibilities, along with making time for Beth, his daughter.

With Jules showing up, Brockmire finds an effective foil. However, he has to worry about his daughter going to New York for college. Ultimately, the first episode lays the groundwork for being confronted with the possible end of baseball. It remains to be seen how the upcoming episodes progress, hereon.