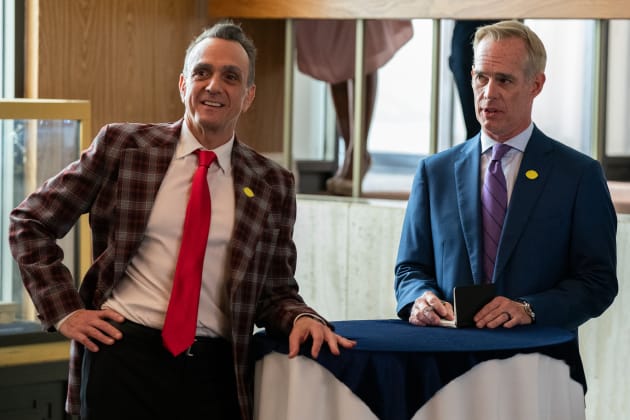 ‘Brockmire‘ is having a fantastic fourth season. It is set in an apocalyptic future, where baseball has been replaced by cricket as America’s most popular sport. Both topical and humorous, ‘Brockmire’ tackles the dystopic situation quite tactfully.

We are not allowed to get lost in the ramifications of the future. Our focus is drawn to the eponymous character’s relationship with his daughter. Since she joins a college in New York, Brockmire is more focused on spending time with her than working to save baseball. However, he is not just responsible for rehabilitating his image. It falls upon Borckmire to make baseball accessible again.

For this purpose, he enlists the help of Charles and Jules. The latter is reticent at first, considering their history. However, Brockmire is persuasive and gets her to help them. Soon enough, Jules and Brockmire come up with some stellar ideas, and the former even manages to make baseball a more communal experience.

However, the previous episode shows Brockmire and Jules falling out over the latter making his daughter her drinking buddy. Curious to know what happens in the latest installment? We will give you the rundown, and spoilers about the upcoming episode. We will also tell you when and where to watch the next installment.

Brockmire Season 4 Episode 7 Release Date: When Will It Premiere?

”Brockmire” is on IFC, so you can easily watch it with a cable subscription. If you don’t have one, head to the IFC site to stream the latest episodes. With cord-cutters making up an increasing part of the viewer base, options must be kept in mind to cater to them.

If you are a cord-cutter, you are essentially spoilt for choice. Pick between Fubo TV, Philo TV, YouTube TV, or DirecTV. You can also stream the latest episodes on Sling TV. If you are a Hulu subscriber, you should be getting Season 4 of the show soon. In the meanwhile, you can watch up to Season 3 of ”Brockmire.”

As for Amazon Prime subscribers, you should be able to buy and stream the latest episodes eventually. For now, you can only access up to Season 3 of ”Brockmire.”

The upcoming episode is titled “Union Negotiations.” We see negotiations taking place at professional and personal levels. While baseball players’ contracts are up, Brockmire and Jules have to rediscuss the terms of the deal. However, a strike looms on the horizon, threatening the very future of baseball. Meanwhile, Jim and Jules also try to give their relationship another chance.

Titled “The Hall,” the episode sees Jim preparing to be memorialized for his contributions to baseball. On the biggest day of his life, he expects his daughter to be by his side. However, Beth has a choice to make whether she wants to support or call out Jim.

After all, she realizes that everything Brockmire told her about her deceased mother has been a lie. Once again, ‘Brockmire’ manages to juxtapose a professional victory with a personally tumultuous moment in Jim’s life.