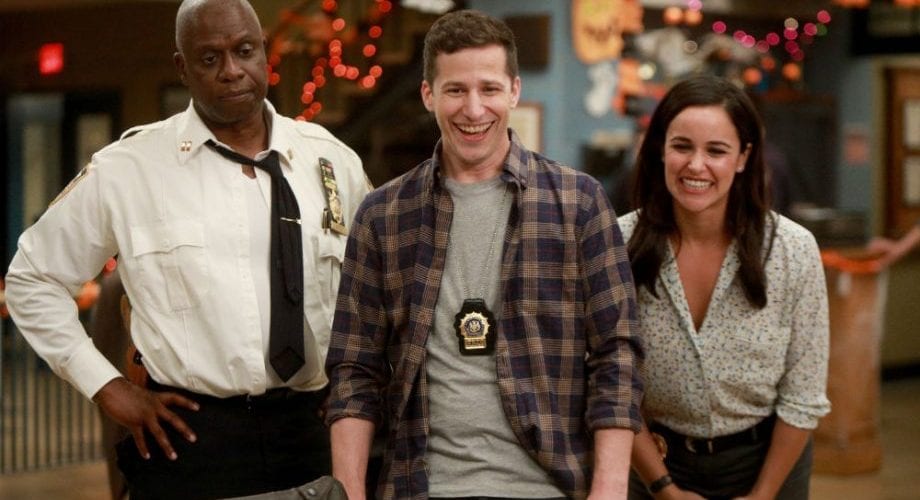 There are many sitcoms that one would find hilarious, but only a handful of them manage to carve a place in our hearts. Over the years, shows like ‘Friends’ and ‘The Office’ have managed to make audiences gleefully smile and occasionally, shed a tear. ‘Brooklyn Nine-Nine’ is the most recent addition to this list. The show has become the modern equivalent of a workplace comedy having taken over popular culture. The characters, location and stories have become memorable for fans and will continue to be for many more years.

The show revolves around a bunch of police officers working for the NYPD at precinct number 99. It follows the police officers’ routine conflicts as they catch criminals and go through regular office issues in a comedic manner. The diverse cast of characters only makes the show more enjoyable.

There is the goofy, easy-going protagonist essayed to perfection by Andy Samberg. Then, there’s the dorky Amy Santiago and the poker-faced, homosexual Captain Ray Holt. The uptight, tough-at-heart Rosa Diaz proves to be a refreshing addition to the mix while Sergeant Terry’s delicate personality caged in an imposing physique serves to add some warm, laugh-out-loud moments. Apart from that, there are several wacky characters who populate the precinct and add to the charm of ‘Brooklyn Nine-Nine.’

The show’s setting is not discrete at all. In fact, it is right there in the title. It takes place in the 99th precinct of the New York Police Department, located in…drum roll…Brooklyn. Many of you might be wondering whether the show is actually filmed in Brooklyn.

After all, the action of the show is not limited to the police precinct (although a significant portion of each episode takes place there). Apart from heist competitions and elaborate pigeon-evacuation measures, the precinct witnesses tons of outlandish activities that the characters regularly engage in. However, they also take their antics outdoors.

So, where is Brooklyn Nine-Nine filmed? Is it actually shot in New York?

Before getting excited at the prospect of ‘Brooklyn Nine-Nine’ actually filming in the titular place, it must be noted that only exterior, establishing shots have been filmed in New York City. While filming in Brooklyn might have added a layer of authenticity, it would have been a logistical challenge for the producers.

California is the hub of Hollywood and most productions are filmed there. It has established facilities and production organisations which make filming in the state easier. Hence, the producers cannot be faulted for choosing to film a long-running sitcom anywhere else.

Building used in the establishing shot of Brooklyn 99. An actual precinct in brooklyn. pic.twitter.com/oE4TVzA6R2

Most of the interior filming for ‘Brooklyn Nine-Nine’ is carried out at CBS Studio Centre in Studio City, California. The production facility has a total of 18 sound stages, ranging from 7,000 square feet to 25,000 square feet in area. This is where a set for the interiors of the 99th precinct is constructed.

You can watch what the set looks like in the video below. It shows how every little detail is taken care of, from Jake’s toys on his desk to Captain Holt’s photos in his cabin.