Brooklyn Nine-Nine S07 E11: All the Details You Need to Know 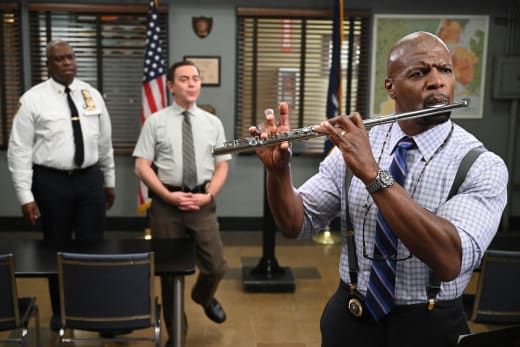 In Brooklyn Nine-Nine season 7 episode 10, we finally get to see Jake and Amy breaking their pregnancy news before their peers. But Jake is also dealing with daddy issues, which is another part of the storyline. On the other hand, the couple hosts a gender reveal party, which of course, has its own share of mishaps. We will come to that later.

Now, with episode 10 out of the way, fans are curious to know the details of the next episode. Read on to know everything about ‘Brooklyn Nine-Nine’ season 7 episode 11.

Brooklyn Nine-Nine Season 7 Episode 11 Release Date: When Does it Premiere?

Its official synopsis goes as follows: “The squad competes in an effort to determine who is the greatest human/genius.”

You can catch episode 11 of ‘Brooklyn Nine-Nine’ season 7 by tuning in to NBC at the timeslot mentioned above with the help of an active cable subscription. Moreover, you can also watch the season online, if you have a valid cable provider’s login, on NBC’s official website.

Well, first things first, Jake and Amy are due to have a baby boy. But this means bad news for Jake as a boy means that the fated Peralta curse has again been revived. According to Jake’s father, all Peralta boys are destined to have bad relationships with their dads.

We all know that Jake has struggled to bond with his father — and the latter also shares a strained relationship with Jake’s grandad. In fact, Rob calls his father “The Admiral” — who refused to visit his son at the hospital and also pretends to lose his train of thoughts in order to avoid giving answers.

On the other hand, Rob informs Jake that this is not a genetic problem. Everything depends on how parents raise their children. And we know that Jake should not worry — he will be a fantastic dad. Of course, there’s Amy, who has all the qualities to be a doting mum.

Finally, the couple decides to have a gender reveal party. But the Perlatas end up ruining the cake that was supposed to hide the surprise. At the last moment, Charles bakes a new cake and saves the day.

Hitchcock and Scully are assigned a case by Amy and the duo does not record the witness’s name because he does not have legal immigration status. Terry gets a new responsibility of acting as the flutist for the NYPD’s marching band! Holt coaches him and Terry is so perfect that he is selected without an audition.