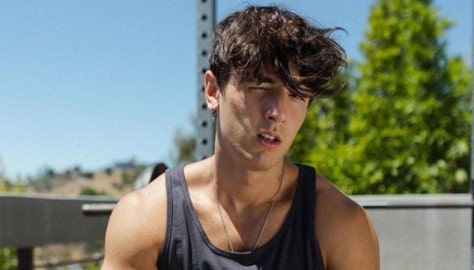 Contrary to widespread rumors, Bryce Hall is alive and doing well. The American social media personality has quite a stellar presence and fan following on TikTok and YouTube. Born in Maryland, Bryce began his social media career on YouNow when he was just 15. The now-famous social media persona began live streaming, to make friends after he was bullied. Like several stars, he too was on Vine, until it shut down, and then moved to Musical.ly.

Currently, Bryce is a member of Sway House, a TikTokers’ collective. If you want to check out his career beginnings, and scandals with the former manager, you can see ‘Jawline,’ where Hall appears as himself. Although Bryce’s been involved in activism, including the Black Lives Matter protests, he’s also courted controversy by tweeting about wanting a ‘straight TikTok.’ Loved or hated, but never ignored, here’s why the internet has been suddenly abuzz with the news of Bryce Hall’s demise.

There doesn’t appear to be any concrete source that sparked the tale of Bryce Hall’s death. However, rumors suddenly appeared online that Hall had passed away due to COVID-19. Recently, Bryce celebrated his 21st birthday, where he invited quite a few people for a party despite the worsening condition of the pandemic in the US. Stories began doing the rounds that he struggled with coronavirus complications soon after this and passed away. Here’s a post from Bryce’s birthday party.

Of course, any tale about Bryce’s coronavirus complications is entirely false. Even if Bryce did struggle with something, at his age, it is unlikely for conditions to worsen so quickly to become fatal. As such, there’s no need to worry because Hall’s responded to the death rumor in a tweet, and he’s not too pleased about it. Check out Bryce’s take on the situation below.

what’s up with this trend saying im dead and won’t be missed / already forgotten… wtf is wrong w some people? hating someone is something but wishing death upon someone is never okay cmon… these comments can hurt anyone pic.twitter.com/3K8GVxUIKS

While Hall is alive at the moment, he is not exactly doing well. He’s currently run out of favor with the city of Los Angeles. Reports suggest that though the COVID-19 situation is worsening in the City of Angels, several TikTok stars feel it is okay to host giant and irresponsible parties at their mansions. Bryce is one of them and has had many gatherings despite multiple warnings to the contrary. L.A. Mayor Eric Garcetti has taken the drastic step to cut power to Hall’s home. You can see the tweet from Taylor Lorenz of the New York Times, confirming the same, below.

Important to note that the power has been shut the off at Bryce's PERSONAL rental home in the hills. The home that Bryce's actual 21st b day party was held at in Encino still has functioning utilities according to sources.

The mayor’s been firm in his stand, and noted, “With more than 2,000 Angelenos—and over 170,000 Americans—lost to COVID-19, we need every resident to undertake critical safeguards to stop the spread of this virus. That includes not hosting or attending parties that put themselves, their neighbors, and many others at risk.” He’s also tweeted about disconnecting power to Bryce’s home, as you can see below.

Today I authorized the City to disconnect utility service at a house in the Hollywood Hills to stop the large parties held there in flagrant violation of our public health orders. Parties like these can quickly and easily spread the virus and put our communities at risk.

Perhaps, the situation with Bryce, concerning the pandemic, coupled with his residence’s power being cut off sparked the death rumors. However, Bryce released a TikTok video, seemingly in response to this move.

Thus, it is evident that not only is Bryce alive, but he’s also fit enough to respond to situations and stand his ground. Any rumors about his death hold no water. [Cover Picture Courtesy: Bryce Hall/Instagram]