‘Bulletproof’ is a cop comedy-drama that follows the story of two detectives serving in the National Crime Agency. The series is created by Noel Clarke and Ashley Walters, who also star in the show, with Nick Love, who also serves as the director, alongside Ole Endresen. They were inspired by classic cop dramas like ‘Lethal Weapon’ and ‘Bad Boys’ and you can easily see their influence on the show. The series is executive produced by Love, Michele Buck, Judy Counihan and Allan Niblo. Produced by Jonathan Finn, ‘Bulletproof’ airs on Sky One in the UK, while The CW handles the broadcast in the US.

Bulletproof Cast: Who’s in It? 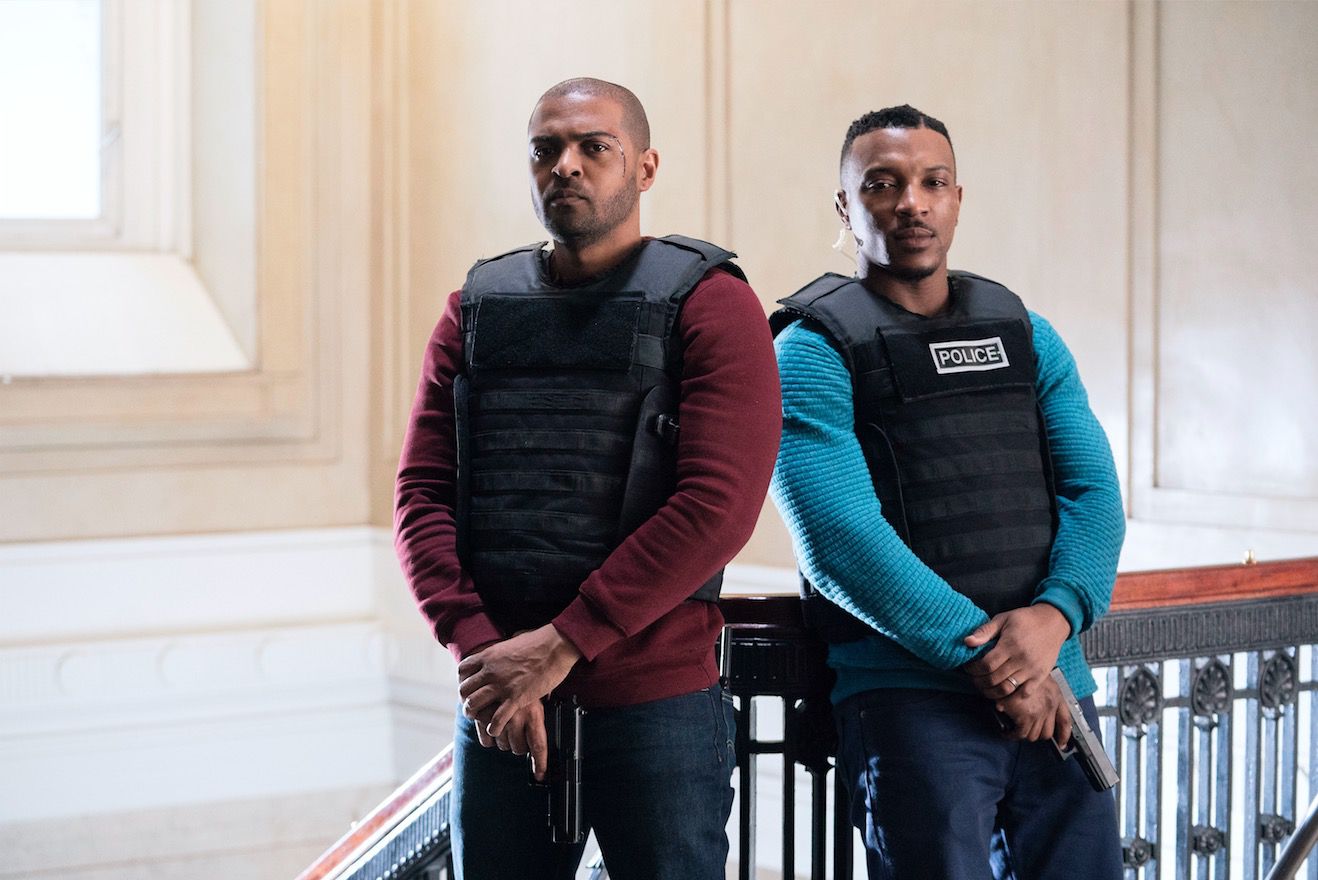 ‘Bulletproof’ stars Noel Clarke as Detective Aaron Bishop. BAFTA and Laurence Olivier award winner Clarke has worked in a great number of films and TV shows which includes ‘I Kill Giants’, ‘The Throwaways’, ‘Saving Santa’, ‘Star Trek: Into Darkness’, ‘Sex & Drugs & Rock & Roll’, ‘The Level’, ‘Chasing Shadows’ and ‘Doctor Who’. He has also served as a writer and a producer for various projects.

Ashley Walters stars in the role of Detective Ronald Pike Junior. He is known for his work in ‘Safe House’, ‘The Aliens’, ‘Truckers’, ‘Outcasts’, ‘The Hidden City’, ‘Demons Never Die’ and ‘Speed Racer’. Apart from his acting, Walters has also made a name for himself in the music industry. Lindsey Coulson plays the role of their senior, Sarah Tanner. She is best known for her role in ‘EastEnders’. Her other credits include ‘Out of Hours’, ‘Paradise Heights’, ‘The Stretford Wives’, ‘Feather Boy’, ‘The Bay’, ‘The Stepfather’, ‘Casualty’ and ‘Doctor Who’.

Christina Chong appears in the role of Detective Nell McBride. She has worked in films and TV shows like ‘Black Mirror’, ’24: Live Another Day’, ‘Of Kings and Prophets’, ‘Christmas Eve’, ‘Halo: Nightfall’, ‘Line of Duty’, ‘The Wrong Mans’, ‘Whitechapel’ and ‘Johnny English Reborn’. Lashana Lynch portrays the character of Ronnie’s wife, Arjana. She most recently appeared in ‘Captain Marvel’ as fighter pilot Maria Rambeau. Additionally, she has worked in ‘Still Star Crossed’, ‘Crims’, ‘Atlantis’ and ‘Powder Room’. She has also joined the cast of ‘Bond 25’ and FX’s upcoming post-apocalyptic drama, ‘Y’.

Mandeep Dhillon plays the role of Detective Kamali Khan. She has worked in films and TV shows like ‘After Life’, ’24: Live Another Day’, ‘The City and The City’, ‘Hospital People’, ‘Fried’, ‘Wolfblood’, ‘Finding Fatimah’ and ‘David Brent: Life on the Road’. Jason Maza plays the role of Detective Chris Munroe. His acting credits include ‘Whitechapel’, ‘The Bill’, ‘Silk’, ‘Call the Midwife’, ‘Fish Tank’, ‘Demons Never Die’ and ‘Welcome to the Punch’. He is also known for his work in the theatre.

Clarke Peter plays the role of NCA Director-General and Pike’s father, Ronald Pike Senior. He is known for his work in ‘John Wick’, ‘The Corner’, ‘The Wire’, ‘Treme’ and ‘Person of Interest’. He is also set to appear in HBO’s fantasy-drama, ‘His Dark Materials’. David Elliot plays the role of Detective Tim Jones. He has worked in movies and TV shows like ‘Down a Dark Hall’, ‘The Cry’, ‘Kajaki’, ‘Sleeping Beauty’, ‘The Wee Man’ and ‘Seven Shots’.

Caroline Goodall appears in the role of the Deputy Mayor of London, Charlotte Carmel. She has appeared in films and TV shows like ‘The White Princess’, ‘Berlin Station’, ‘Midsomer Murders’, ‘The Mists of Avalon’, ‘A Difficult Woman’, ‘Half A World Away’, ‘The Moon Stallion’, ‘The Dressmaker’, ‘The Princess Diaries’, ‘Schindler’s List’ and ‘Chasing Liberty’. Emma Rigby plays the role of Bishop’s girlfriend, Sophie Latimer. She has worked in ‘Once Upon a Time in Wonderland’, ‘Ripper Street’, ‘Endeavour’, ‘Prisoners’ Wives’, ‘Hollyoaks’, ‘Becoming Human’, ‘Demons Never Die’ and ‘American Violence’.

Bulletproof Plot: What’s It About? 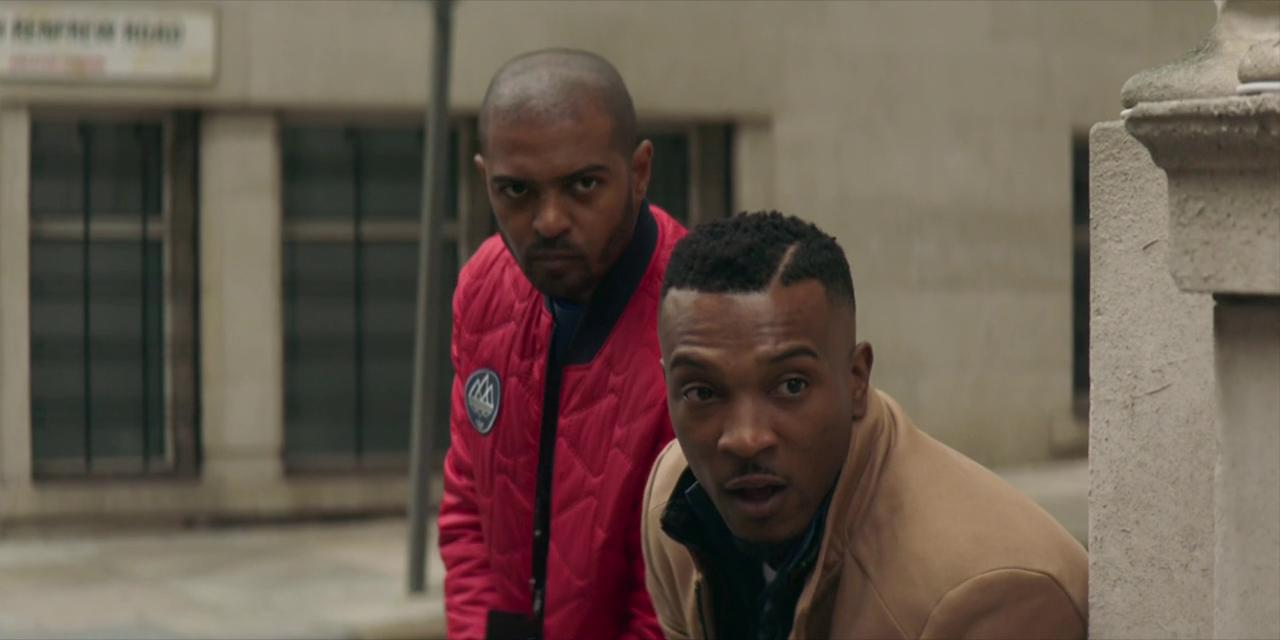 Aaron Bishop and Ronnie Pike work as detectives in the National Crime Agency in London. The strong bond between them comes not only from their work relationship but also from a friendship that has developed since they were children. Sharing the same work ethics and treading a similar thought process when it comes to catching criminals and bringing them to justice, the differences in their backgrounds is the only thing that separates as well as complements them.

While Pike has his father’s legacy to live up to, Bishop doesn’t know much about his own family. Growing up in foster homes and moving from one place to another has given him a perspective about street life that Pike doesn’t have. Pike’s father is a big name in the police department and currently serves as the Director General of the NCA. This background has allowed Pike a peek into the bureaucracy of the system. He sometimes suffers from the pressure of his father’s reputation and wants to surpass it, in order to not live in his shadow. Together, Bishop and Pike form a formidable team that takes on dangerous criminals on the streets of London.

Bulletproof Season 2 Release Date: When Will It Premiere?

‘Bulletproof’ season 1 premiered on May 15, 2018. The series became one of the most watched shows of the network, bringing high ratings as well as receiving good reviews. Now as far as the next season goes, we have good news for the fans. The CW has renewed the show for another season. Considering the massive popularity of the show, it’s not a surprising decision at all. Even though no release date has been announced, our best guess is that ‘Bulletproof’ season 2 can premiere sometime around September 2019. We will update this section as soon as we learn more.

While we wait for release date of ‘Bulletproof’ season 2, check out the season 1 trailer to refresh your memories. If you haven’t seen the show yet, head over to Sky One to catch all the episodes of the previous season.