Callie Russell From Alone: Everything We Know

HISTORY’s survival reality show drops off its participants at an isolated and wild location to test their ability to fight extreme conditions. Season 7 of this TV series has the same premise with an interesting twist: survive 100 days ‘alone’ at the arctic and take 1 million dollars home. Officially titled “Alone: Million Dollar Challenge”, 8 men and 2 women were left along the shore of the east arm of Great Slave Lake in the Northwest Territories of Canada on June 11, 2020. Only three contestants managed to fight until the end. One of them was the tough Callie Russell, an Ancestral Living Skills Instructor. Here’s everything you need to know about her!

Callie Russell Nationality: Where is She From?

Born and brought up in Flathead Valley, Montana, Callie has dedicated her life to deepen her relationship with the things that sustain her livelihood, including food, water, shelter, and clothes. Since her childhood, she has felt most ‘at home’ when surrounded by nature. She has been living a typical nomadic life for years now and is no more accustomed to the comforts of a proper house. 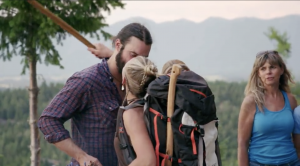 Callie has had the privilege to belong from an extremely supportive family. They have always encouraged her heart’s calling and given her the wings to follow her passion. Right before she is deployed into the harsh environment of the arctic region, she gets emotional about not being able to see her parents and sister for so long. In fact, her sister is to be credited for encouraging her to be on Instagram.

With her backpack ready, she kisses her “sweetheart” Joshua goodbye and says that the time and distance away from him would definitely make her journey difficult. Yet she looks forward to having the financial abundance to support the kind of life she intends to live. Self-admittedly, she has not maintained a social media presence and so limited is know about her personal life and her childhood experiences.

This summer I’ve been blessed to teach primitive/survival skills at an amazing camp called Montecito here in the Sequoia National Forest / Park … As I teach and tell stories it makes me think of all the good times I have had as a Trailwalker for the Anasazi Foundation in Arizona. I am so grateful for these past 8 formative years of walking with so many amazing people; including me these four amazing friends (Josh, Callie, Clutch, and Heidi). This photo makes me smile a lot .. good memories ❤️ #formativeyears #iwalkthewoods #myfriends #anasazi #primitiveskills #teacher #guide #friend #iamexactlywhereineedtobe #summer2020 #memories #buffalobear #bearpawriver

She has a strong support system of friends like Josh, Daniel, Clutch, and Heidi who work together as a guide to teach primitive or survival skills. They together put up a camp called Montecito in the Sequoia National Forest, Arizona.

Aged 31 years old while on her “Alone” journey in the Arctic, she has been traveling around her whole adult life. Callie has not lived in a protected house or slept in a comfortable bed for years now. Her work as a scavenger-gatherer and a guide in wilderness therapy has taken her to every remote location imaginable.

You may be cool, but you’ll likely never be “bustin an ember off a hand drill on the red carpet inside the Crowne Plaza” kind of cool! Miss my Alone Family! #filmeverything #aloneonhistory #aloneseason7

She has been happy living a life out of the public eye, with only the Magpies and Chickadees watching her activities. Callie’s primary area of interest has been in animal processing, hide tanning, felting, basket weaving, and gathering plants for medicine, food, and art. She has performed all of these in the sparsely inhabited rural areas. Before the filming of the show, Callie was living in the woods of Montana with her herd of goats.

Read More: Who is Roland Welker From Alone?