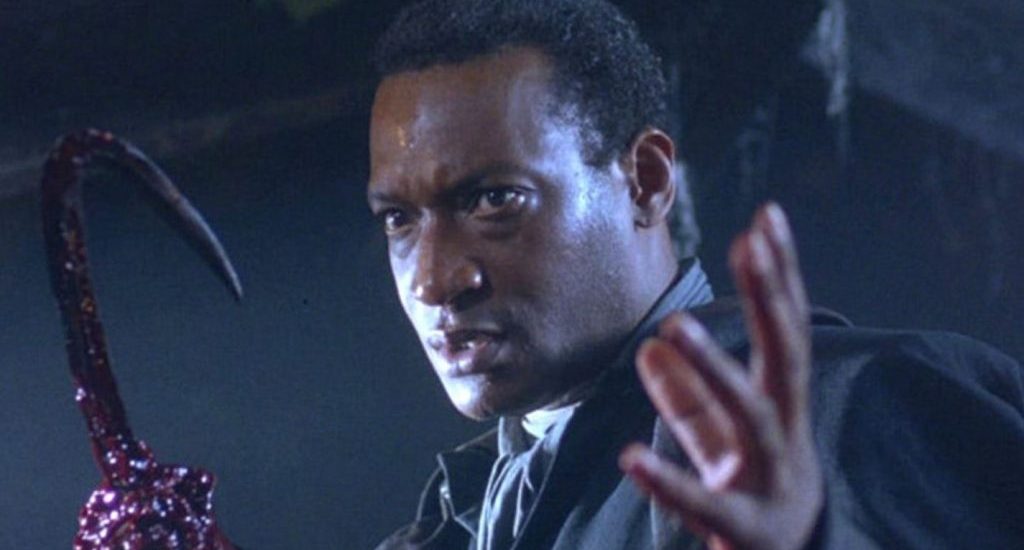 Slasher films were all the rage in ‘80s. People went bonkers over bad-ass villains like Freddy Krueger and Michael Myers that became the source of chills and goose bumps. Despite the craze dying down after that decade, Candyman, a new slasher villain captured viewers’ minds with the 1992 movie, ‘Candyman.’ Its success led to two sequels as well and the trilogy is now considered a cult favorite. Today, almost three decades later, Jordan Peele has written a spiritual sequel for the movie that will be released next year and share its title with the ’92 original.

Best known for writing ‘Get Out,’ Peele is expected to aptly explore the villain’s character which is steeped in racism. The movie is supposed to be a “spiritual sequel” to the cult classic. What this means is that the upcoming movie will only be slightly related to the original and not attempt to be linked to it. That is, it will be similar “in spirit.” That does not mean that the movie will not satisfy die-hard fans. It will wittily address the fandom in a self-aware manner, exploring its connection to the original. Continue reading if you wish to know more about the 2020 film:

Candyman Plot: What is it About?

As stated earlier, the movie is supposed to be a spiritual successor to the 1992 original. It will not be a remake or a direct sequel or coherently related to it somehow. Instead, it will take place in the same fictional universe where events of the original occurred and share similar themes and motifs.

The 1992 supernatural horror movie followed the character of Helen Lyle, a college student who is researching urban folklore. Intrigued by the legend of “Candyman,” a mysterious man with a hook in place of one of his hands, she starts to snoop around to find out more. The legend says that Candyman is summoned when someone looks into a mirror and repeats his name five times. Lyle starts believing his existence when a series of murders occur that seem to bring her worst nightmares to life. She gets even more petrified upon finding out that Candyman wants her to join him in the fictional afterlife. The movie was an adaptation of Clive Barker’s short story. Details about the 2020 movie’s plot have not been revealed yet.

Candyman Cast: Who is in it?

The movie features Yahya Abdul-Mateen II in the leading role. He is an actor and an architect who is best known for playing Cadillac in the musical drama series, ‘The Get Down.’ Moreover, he has also appeared in movies such as ‘Baywatch’ and ‘The Greatest Showman’ and played Black Manta in DC’s ‘Aquaman.’

The American actress, Teyonah Paris will be sharing screen space with Mateen II for ‘Candyman.’ She appeared in the drama series, ‘Mad Men’ where she played the recurring character of Dawn Chambers. However, her breakthrough role came with the indie movie, ‘Dear White People.’ Plus, she has also starred in Spike Lee’s ‘Chi-Raq.’

Furthermore, Tony Todd will play the titular character of Candyman in the 2020 movie. He was the actor that played that role in the original movie and the two subsequent sequels as well. Other than the ‘Candyman’ trilogy, he is best known for appearing in the ‘Star Trek’ universe as Sergeant Warren. Some of his other notable appearances came in movies such as ‘Night of the Living Dead,’ ‘Transformers: Revenge of the Fallen,’ and the ‘Final Destination’ series.

Candyman Crew: Who is Behind it?

After the success of ‘Get Out,’ Jordan Peele has become a sought-after horror writer. It may seem surprising now that the talented artist got his breakthrough with the comedy series, ‘Key & Peele.’ Peele is one of the writers for this movie along with Win Rosenfeld and Ian Cooper. He also serves as a producer. Peele’s attachment to the project makes it extremely promising and greatly heightens viewers’ expectations who will assume that the film won’t be a haphazard reboot.

Tony Todd mentioned how he’d “rather have him do it, someone with intelligence, who’s going to be thoughtful and dig into the whole racial makeup of who Candyman is and why he existed in the first place.” Apart from ‘Key & Peele,’ Peele has also created the YouTube Premium series, ‘Weird City,’ a science fiction web show that has garnered rave reviews.

Çandyman’ is directed by Nia DaCosta. The screenwriter and director is best known for the movie, ‘Little Woods,’ which is considered her breakthrough.

The film’s cinematography is handled by John Guleserian. He is best known for his work on movies such as ‘Breathe In’ and ‘Like Crazy.’

Metro-Goldwyn-Mayer Pictures, BRON Creative and Monkeypaw Productions are the studios attached to the project while Universal Pictures is distributing it.

Candyman Release Date: When Does it Premiere?

‘Candyman’ is scheduled to release in the United States on June 12, 2020. The movie will be one of the many promising horror movies to watch out for next year such as ‘The Organ Donor,’ ‘The Turning’ and ‘Halloween Kills.’ However, ‘Candyman’ promises to be a nuanced and well-made film with deeper messages, thanks to Peele’s involvement.

A trailer or teaser for the 2020 movie has not been released yet. However, you can check out the trailer for the 1992 original below. It provides a good sense of the tone of the original movie apart from its basic premise.