8 Best Cave Movies of All Time

A cave is not an apt place where one would want to hang out with friends; but there’s really something odd about these claustrophobic places that turn on many Hollywood filmmakers! Humans evolved out of a cave, but moviemakers in the West keep going back to these dark, tight spots to bring forth stories that we love watching on the big screen. Time and again, they’ve come up with all sorts of movies featuring caves in them and we must say, most of them were scary enough to shake us to the core. While these cramped places form an integral part of interesting stories that moviemakers have to tell us, here’s the list of top cave movies ever that have caves as one of the major backdrops in the film. You can find a couple of these best cave movies on Netflix, Hulu, or Amazon Prime. 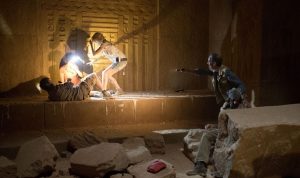 When most film directors were experimenting with the horror genre in the year 2014, Gregory Levasseur came up with an idea of making a film on the Egyptian pyramids that possibly hold many secrets buried deep, down under. ‘The Pyramid’ looks at a team of archaeologists, which finds an unusual three-sided pyramid beneath the surface of the earth and soon begin climbing down to explore the odd structure. As they make their way through the dark tunnel-like construction inside, they are attacked by creepy-looking flesh-eating cats, who claim lives one after the other. But that is just the tip of the pyramid (read iceberg!). There are vast terrors lurking inside the dark tomb and a scary legend waiting to unleash itself. The film did not do well at the box office, with audiences giving it thumbs down for painfully bad CGIs and predictable jump-scares; but what managed to stay in the minds was the depiction of the caves, crevasses and deep, long tunnels that gave them an unsettling feeling throughout the film’s run time. 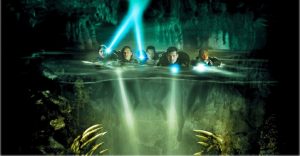 With a name that defines an underground place inside a mountain or cliff, the film could have had a better story with the cave as the main backdrop, but what it ended up with was an impression of ‘The Descent’; yet ‘The Cave’ remains one of the few good movies that featured the confined spaces in all their glory! When a carefully chosen team of scientific explorers go on an underwater cave diving mission that had to be aborted decades ago, an explosion traps them inside, submerged and in total darkness, with only each other for support. As they struggle to find an exit, mysterious creatures begin taking away one person after the other, as they frantically look for all options to survive the onslaught. The creature-feature received mixed reviews from viewers and critics alike, but each one singularly praised the realistic sets and the underwater sequences, which did manage to scare all those with faint hearts! 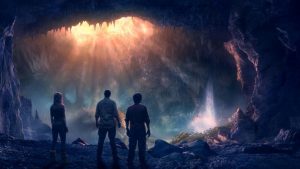 Based on Jules Verne’s book of the same name and the first in the ‘Journey’ series, the movie starred Brendan Fraser, Josh Hutcherson and Anita Briem in lead roles. The highly successful sci-fi adventure film followed the story of a volcanologist’s teenage son’s expedition to a dormant volcano in Iceland with his uncle, when they meet a former expert’s daughter, who helps the twosome in their journey to look for what the volcanologist had started out to find. On their ascent, they are forced to seek shelter inside a cave, which then accidentally opens up into a whole new world for the trio, who then has to fight off ancient sea monsters and terrestrial creatures to make their way back home safely. Although the fantasy film was shot using CGIs, the scenes inside the cave gave viewers a claustrophobic feeling until a picturesque colourful world appeared on the screen, filled with creatures that have thankfully now become stories of the past! 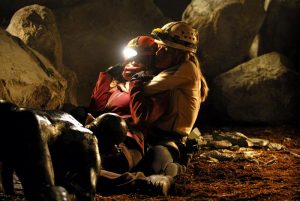 While the first installment was a hugely successful film, the second in the series did not meet the same fate at the box office. With a stretched second half and screenplay that was as predictable as it could be, ‘The Descent Part 2’ fared a little below expectations. Beginning from where the first part had left off, the film follows a team of cops and cave explorers, along with the protagonist, who descend down the caves to find what actually killed the group of friends. As they go further inside, they find half-eaten corpses of the other women, as more and more creatures now start to attack the explorers. Knowing that there is almost no way out, they fight off the hybrids, only to be killed in the assault. The movie, like its predecessor had the caves as its backdrop, and needless to say, they were very well integrated into the narrative of the film. The claustrophobic feeling, mixed with the urge to break free from the humanoids worked well in the favour of the movie and it did an average business the world over. 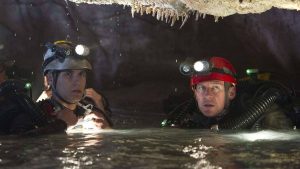 The movie was inspired by true events, where the co-writer of the film was in a cave diving expedition himself, while he was still in college in Australia. Basically an underlying story of a father-son relationship, ‘Sanctum’ was one of the most memorable movies with the cave serving as the main backdrop in it. ‘Sanctum’ narrated the story of an expedition team, exploring the virgin Esa’ala Caves off the coast of Papua New Guinea, when a tropical storm entraps them inside, forcing them to abandon their journey and quickly find a way out. James Cameron produced the film and made sure each and every aspect of the underwater survival movie looked good, but apart from the actual feeling of claustrophobia and unanimous sighs of relief towards the climax, the audiences did not have many good things to say about the film! 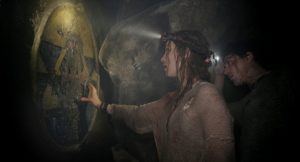 Shot on location at the actual Catacombs of Paris, which is an underground final resting place of human remains post burial, the horror film featured the cavern extensively and was entirely shot inside the eighteenth century ossuary. The film was about a traditional alchemy scholar, who with her unlikely team of five members enters the Catacombs to find the elixir hidden deep inside. Claustrophobia, exhaustion, guilt and fear overpower the group as they go through various twists and turns inside the deep underground tunnel, looking for the philosopher’s stone. Although the film was predictable, the scenes featuring the real-life macabre underground tunnel sent shivers down the spine and made the film even more memorable. 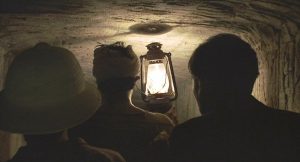 While the classic period film did not entirely feature caves or set the story inside these dark spaces for its total run time, the caves did form an integral part of its narrative. The movie was set in the early 20s and spoke of British-ruled India, when a City Collector’s fiancée visits him to see if she can settle in the tropical country with him post marriage. On one of her local sightseeing expeditions, she enters a cavern with a local, widowed surgeon friend, to whom she is immediately attracted, but later accuses of sexually violating her in the confined areas when he doesn’t reciprocate her feelings. The movie then looks at the trial of the doctor and how things shape up towards the end. Directed by David Lean and featuring well-known art house Indian actors like Victor Banerjee, Saeed Jaffrey, Roshan Seth and Dina Pathak, ‘A Passage To India’ is one of the best drama films with a whopping eleven Oscar nominations, winning two for best original score and actress in a supporting role. 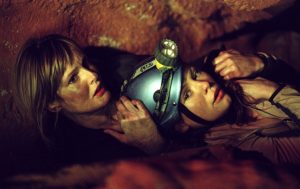 The British horror film, which was directed by Neil Marshall, was a smash success at the box office across the world and it kept the audiences on the edge of their seats the whole time. With a dark poster depicting six women at the edge of a cave, which almost resembled a human skeleton, the film was the story of six friends, who embark on a caving adventure deep inside its unexplored part, when they realize there’s no way out and that they may be trapped forever. As they descend further and further inside, they start falling prey to creepy hybrid creatures that survive only on human flesh. But then that is not the end of the story! The director skillfully made use of caves as the backdrop in the film and with terror lurking at every dark nook and cranny, ‘The Descent’ truly made for an engaging watch.