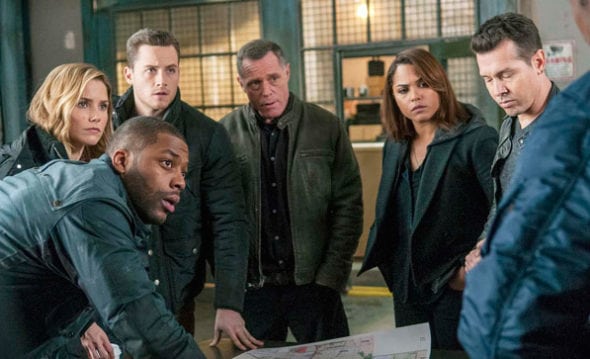 ‘Chicago P.D.’ is a police centered tv series created by Dick Wolf and Matt Olmstead. It is the second franchise by Emmy Award winner Dick Wolf and one of the installments in the Chicago series. It airs on the NBC and first premiered on January 8, 2014.

The show takes viewers into the police department of Chicago, which is heavily influenced by political and social agendas. It follows District 21 of the Chicago PD which largely comprises of two groups, the uniformed cops and the members of the Intelligence Unit. We are given a peek into the lives of men and women who stop all sorts of crime, from organized racketeering to drug dealing, to petty thefts.

Police procedurals are always appreciated among viewers since we want to see the lives of people who are in the line of fire and who go above and beyond to protect and serve society. Of course, there are times when their jobs are hampered by the politics at play. Anyhow, if you like ‘Chicago P.D.’ we would also recommend you watch ‘Blue Bloods‘, ‘Hawaii Five-O‘ and Wolf’s own ‘Law & Order‘. True to the ‘Law & Order’ format, which takes a look at how the judicial system works in conjunction with the law enforcement agencies, ‘Chicago P.D.’ has also given rise to a spin-off titled ‘Chicago Justice‘. In case you want to immerse yourself into the universe of public servants in Chicago, the other shows by Wolf including ‘Chicago Med‘ and ‘Chicago Fire‘.

Jason Beghe plays Sergeant Henry ‘Hank’ Voight, who is the head of the Chicago PD intelligence unit. Hank is a tough officer, who is quite loyal to the department and controls a dedicated team of officers. Notably, the character was first introduced to us as a dirty cop in ‘Chicago Fire’ and since then we have known him to be mercurial and enigmatic. Jon Seda plays the role of the Senior Police Detective Antonio Dawson. Although Dawson works with Voight, it is clear over the seasons that this man has some limits to what he is willing to do to get criminals off the street. Jesse Lee Soffer appears as Police Detective Jay Halstead, who is a former Army Ranger and brother of ‘Chicago Med’ character, Dr. Will Halstead.

Other cast members include Patrick John as an Officer Adam Ruzek, who is a young undercover police officer, Marina Squerciati as Officer Kim, Archie Kao is Detective Jin, the tech expert in the department.

In season 7, all the main cast members returned to the show, except for John Seda who left the show for good despite being one of the core members of the ‘Chicago’ franchise.

Chicago P.D. Plot: What is it about?

‘Chicago P.D.’ basically depicts the ways and works of a police department of Chicago as they attempt to accommodate local crime scenes in their intelligence unit. It also reflects on uniformed patrol officers in the city and the suburban areas working in sync with the Intelligence Unit from the 21st District of the Chicago Police Department. The show does not shy away from showing a degree of police brutality for dramatic effect. It might be said that this series is a direct result of ‘Chicago Fire’ and while Voight was introduced as an out and out bad guy in that show, it goes to the credit of ‘Chicago P.D.’ that they try to get the viewers to question their loyalties towards him. His corruption is still part of the narrative, but as his motives are better explained, we cannot help but be torn by the moral conundrum.

The show is filled with constant action, from cop chases to officials busting into apartments, and even includes a lot of arrests being made. With sadistic drug dealers, severed heads, and shootouts, there is not a single dull moment in the show,

Honestly, it is quite exciting to watch ‘Chicago P.D.’ crossovers with the other shows in the franchise. We cannot wait to see how the brave officers take on the workload not just in their professional lives, but in their interpersonal relations as well.