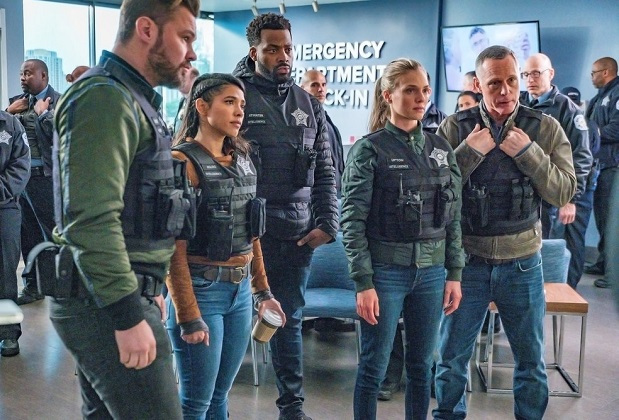 ‘Chicago P.D.’ Season 7’s fall finale (episode 9) on November 20, 2019, does end on a massive cliffhanger. While Halstead, along with Angela, is kidnapped when he is on an undercover mission, he faces another complication. Angela is the wife of Marcus West, the man whom Halstead had, by mistake, sent to prison.

With Halstead gone, Intelligence, with an emotional Upton in the lead, sets off to find their colleague. But Halstead is in a bad condition — bloodied and beaten. When Intelligence finds him, he is in a badly injured state. The condition worsens when Angela shoots. The end!

No wonder, after this ending, fans were crazy to know what happened to their favorite character. Episode 10 landed on January 8, 2020, and did manage to answer the question. Read on and you will get to know what happened in our episode 10 recap. Beware of spoilers though! And if you are already done with the last episode scroll down to get the details of the upcoming episode — Chicago P.D season 7 episode 11.

Chicago P.D. Season 7 Episode 11 Release Date: When Will It Premiere?

Here’s what to expect from the upcoming episode as per the official synopsis: “Ruzek and Burgess’s secret begins to have severe implications for their police work. A series of deadly acts of vandalism causes tensions to run high in the insular neighborhood of Canaryville. Atwater tries to reach out to his brother, but only pushes him further away.”

If you wish to resort to online viewing, you can watch the episodes on NBC’s official website. Other options include streaming the season on Hulu, Fubo, DirectTV, and YouTube TV.

Episode 10, titled Mercy, jumps in right after the finale of episode 9. We catch up with Halstead, who is not looking good. Will informs the unit that the bullet resulted in huge blood loss since it hit one of his arteries. The Intelligence heads off to chase another case and Upton decides to stay back in the hospital. Rojas understands her emotions and says: “It’s hard because you love him.” Upton replies: “Of course I love him. He’s my partner.”

However, to everyone’s relief, Halstead makes a miraculous recovery. As he gets ready to leave the hospital, Upton visits him and confesses: “When you were in surgery, no one knew what was going to happen and it made me realize that I wanted to tell you something.” But at that precise moment, his phone rings, and she changes her decision, saying: “Never mind.”

Meanwhile, Voight tells Angela that if she reveals the reality of Halstead, the latter would have to face charges of shooting a cop. Angela opts to stay mum and agrees to leave. Jordan returns back to town and gets involved in some dirty work. Ruzek finds out that he has a gun with which he plans to kill someone. Atwater asks his brother, Jordan, to stay at home and not say anything while they question his gangster girlfriend. The girl confesses but meanwhile, Jordan vanishes.