Chicken Scratch Sam From AGT: Everything We Know 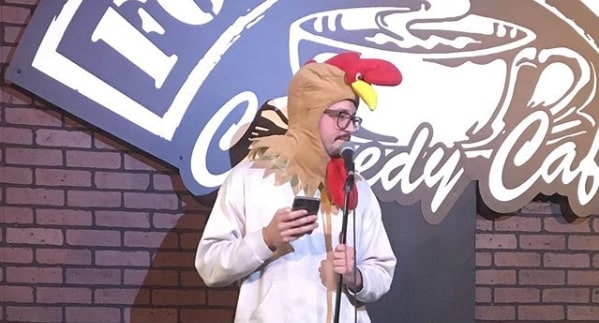 ‘America’s Got Talent‘ is the perfect stage to showcase all things unique. Sometimes, the participants take it too literally. In such cases, we get people like Chicken Scratch Sam. An enthused panel of judges and excited audience members try and decide which performers should continue battling for the grand prize. However, now and then, somebody comes along who throws everything off kilt. What does Chicken Scratch Sam do? What is his skill set, except for the unique name? Here’s all you need to know.

Where is Chicken Scratch Sam From?

Chicken Scratch Sam or Sam Brilhart is originally from a small town called Linden, Michigan. However, he moved to Los Angeles for the weather and creative endeavors. Sam’s been to different places and was in Chicago for some time as well. Here’s Sam working and having fun in the City of Angels.

What Does Chicken Scratch Sam Do?

Chicken Scratch Sam is a comedian and perhaps dresses up as a chicken sometimes, as the post below shows.

However, he also has a job as a bartender. Sam’s been tending bars for over ten years now. He worked in Chicago as a bartender, and when he moved to Los Angeles, he worked at a bar called Street, which was eventually turned into a tavern called the Mud Hen Tavern. When asked why he is a bartender, Sam replied that it merely allowed him to pursue other activities during the day, since he mostly works at night.

While Sam might have another job, he is quite serious about his career as a budding comedian and is planning to make the exposure from ‘AGT’ count, as he tries to build a future for himself.

Chicken Scratch Sam Prediction: How Far Will He Go?

Chicken Scratch Sam is a unique prospect this season. He has a caricaturish approach to his comedy, which might either sit very well with the audience or not win him too many points. The performer’s progress seems entirely unquantifiable at this point. However, Sam strikes one as a guy who could put others at ease and draw them in with his tales. Not only is this a spectacular trait for a comedian, but it might also see Sam progressing far in the competition.

As a bartender, Sam is bound to have several anecdotes and observational jokes about customers and their drunken shenanigans. In an interview with a local source, Sam spoke humorously about his bartending days in Chicago when it would be seven in the morning by the time they cleaned up. So, they’d have breakfast and beer and then go to bed. Such tales help audiences relate better and get a feel for the contestant’s journey, allowing them to go after the grand prize. Finally, we will leave you with an image of Chicken Scratch Sam in all his glory, performing a stand-up. [Cover Picture Courtesy: Sam Brilhart/Instagram]