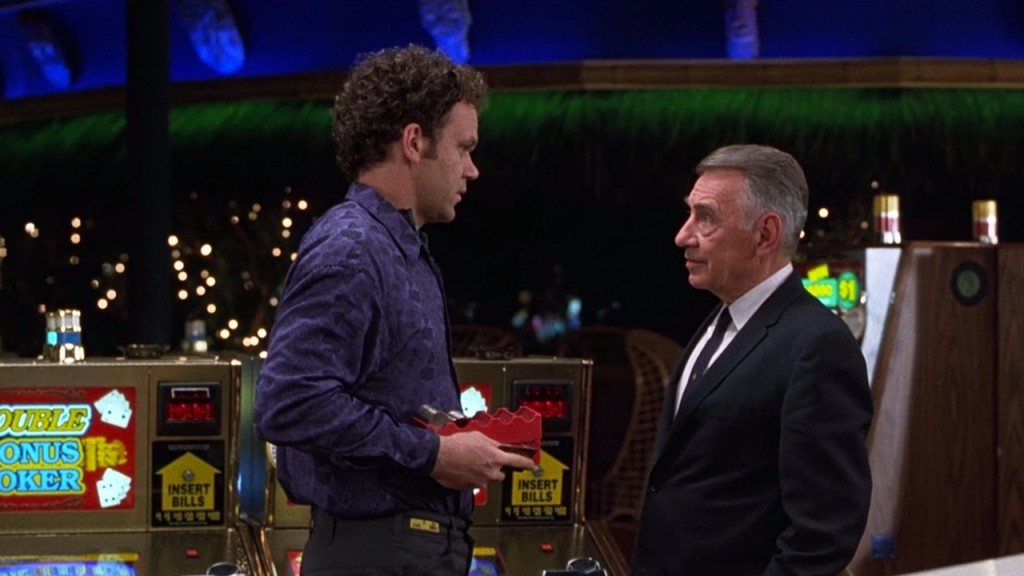 First the cigarette is lit, the stub carefully balanced on the ash tray in between. A pair of knuckles crack nervously. The coffee is then poured into the white china mugs on a roadside diner table, hosting a wise old man and the knuckle-cracker. The wise man cites the ritual in a baritone, somehow patronizing the young man who is clearly in distress. Paul Thomas Anderson maneuvers his camera excellently, giving the viewer a sniff of the suspense, without divulging the entire content. This opening shot is iconic, keeping in the tones of hard world of the desert and the riches that lie in those casinos. The way side diner is a like a refuel station, the gamblers can take a much needed adrenaline break on their way to and from Las Vegas.

PTA cleverly uses this break as a subject for his short film, ‘Cigarettes and Coffee’. Some nimble horizontal camera work tells 3 stories, all somehow connected through a signed 20$ bill. The narrative is random, shifting from one story to the other constantly, with overlapping shots, cutting out the boredom quotient entirely. The first story isn’t told instantly, instead we see the introductory shot pan over to a bickering couple, the husband adding salt to the wounds of his wife constantly, who in a drunken stupor had gambled away all of his money at craps. Curt dialogues, snappish attitude and the desperate smoking stupor magnify the already building tension. The waitress acts as the transfer medium, and the viewer is carried back to the first table, where apparently the nervous young man has just finished his narrative. The wise guy advises him to repeat as repetition will only make him surer about what had transpired. PTA sewed another thread from his magic yarn here, shrewdly using his own narrative to control the story and not the other way round.

Apparently when the young man gambles and is on a losing streak, he takes a slight break, steps out and lights a cigarette, writes his name on a 20$ bill and cashes it in the next table of craps. That is his ritual, but the other day, he was forced to break that as he had met his good friend Steven, to whom he had given the money and arranged to meet up within an hour. In his room, he discovers a crumpled signed 20$ bill on the floor, with his wife stating a call from Steven about a slight delay. That is the first real twist the viewer gets – an affair or maybe the man is simply mistaken. In the meantime, a dusty car draws up and a tall man walks up to the payphone installed outside and starts talking. The brusque, arrogant manner is extremely Scorsese-like, (read: Goodfellas and Casino) and he is the classic American gangster, en route to a mission. He is Bill.

After a quick shot of the couple where the wife lets it slip that the trip was their honeymoon (shocker), the stressed young man appears again, stating that he had paid a man called Bill to kill Steven and his wife, and that he is getting cold feet now. Though he had won nearly 8000$ playing craps with that 20$ bill, the desire for revenge was hot. The strings are now beginning to set, with one money exchange mystery being solved. In a cigarette exchange overlap shot, Bill pays for a thermos of coffee and a pack of smokes at the counter with a 20$ bill, which the waitress uses as the return change for the wise old man. He quickly spots the signature on the note though, crumpling it instantly on the floor. Bill opens his car’s boot to reveal a tied up Steven. The now reconciling couple walk away, but not before the wife picks up the fallen money quietly. The couple kiss as the wise guy explains how a cup of coffee and a cigarette will make everything alright. Bill speeds away into the Wild West.

Cigarettes and Coffee travels in a perfect circle and doesn’t end in ambiguity with the last traces lost in darkness. It returns to its origin, but remains open spectacularly to speculation. The way PTA has connected the dots for this one is worthy of admiration. He doesn’t slip in the mystery, he lets the viewer savor the aroma, before lifting up the lid. What really sets PTA apart from others is evident from the way he uses his camera to add to the mystery. He moves a lot, horizontally, and on one single stage, not letting the user settle down in any single part. PTA transforms the short film into a crime drama to such an extent, that a Broadway production of the same wouldn’t require much adjustments at all. On a measly, mostly borrowed budget, PTA used his connections to borrow a Panavision camera for the shoot. Philip Baker Hall, Kirk Baltz, Scott Coffey, Miguel Ferrer were cast audaciously from personal contacts, giving the short film a major look. The ultimate effect was nothing short of dazzling, with PTA gaining serious limelight in the Sundance film festival.

The only mystery that perhaps remain with the closure of this short is the role of the wise old man in the entire scenario. Is he really a benevolent old soul, with a complex for rituals to be followed to perfection or something else lurks behind the puffy old eyes? Ambiguous answers to these are given in PTA’s next project, ‘Hard Eight’. The wise old guy appears again, at the same diner, revealing his name to be Sydney. This time, he takes under his wing another worried young man, gives him a cup of coffee and a cigarette, listens to his problems and offers him to teach him how to gamble. The man, John (John C. Reilly in one of his best performances), wins in Vegas after following Sydney’s advice and a friendship develops. Two years later, they are still friends with John trying to emulate his mentor. He is dating and pimping a young waitress Clementine (Gwyneth Paltrow was earnest), and has hired Jimmy (Samuel L. Jackson, need we say anything more?) as security. The problem starts when John bash up a client who refused to pay Clementine in a motel. Sydney appears and cleans the mess up before making the deranged couple escape to Niagara Falls. Jimmy reveals the real reason for Sydney’s benevolence in what is a straight story- guilt after killing John’s father. The pompous security makes a fatal mistake, trying to blackmail the old dog and gambles away, before returning home one night to find Sydney waiting for him and is shot dead. In an ending reminiscent of Macbeth, Sydney tries to cover up blood on his shirt’s cuff.

Sydney is the ultimate puppet master of the gambling underworld, with Philip Baker Hall’s look eerily similar to Robert De Niro’s Ace in Casino. He is the one who controls the mob, perhaps the boss of Bill as well. He is omniscient and is wizened by his years. He may be ruthless in his business but is benevolent and has a strong attraction towards certain rituals, which he insists must be followed. He helps those innocent souls in turmoil and has no tolerance for thugs and over-smart individuals. He is the ultimate godfather, moonlighting as an old gambler. The eyes speak it all, as is in the case with great actors, and Philip Baker Hall is a veteran of this art. The rounded circles below his eyes and the lines on his face add to the aura of wisdom which surrounds him perpetually like a halo. The character is one of the most well written crime lords of cinema, maintaining his image of a clean man and holding the strings with one hand behind his back. He never goes overboard with his emotions, telling John that he loves him over the phone in the same baritone as always. No wonder the feature almost made him the titular head.

While that would have robbed this pretty straight movie of its only symbolism, naming it Sydney would have been too clichéd. In the world of craps, Hard Eight is an extremely rare occurrence, with the possibility of two fours has a lot of odds. It is considered to be extremely lucky though, (remember Monica and Chandler’s prancing?) and therein lies the irony. Sydney, in a rare loss of temper, bets a hard eight on a cocky young man (immaculately portrayed by Philip Seymour Hoffman, seriously he can do nothing wrong) and loses. Jimmy, elated after extorting money from Sydney, plays a hard eight and wins. Deluded by the spoils of victory, he returns home with a girl, too consumed in ecstasy to notice a gun wielding Sydney who shoots him point blank. Luck shines but is hard eight really lucky for the winner?

Every circle has to be completed, it’s only just a matter of waiting for the right moment, relaxing meanwhile with a sip of coffee and a puff of a cigarette. But all has to wait until the coffee is poured.