Cindy Kaza From The Holzer Files: Everything We Know

Cindy Kaza is a renowned practitioner of mediumship and is known for her astounding potential to connect with the other world. The number of people that seek her help and guidance grew after she appeared on Travel Channel’s ‘Portals to Hell’ and ‘The Holzer Files.’ For the latter, she teamed up with paranormal investigator Dave Schrader and equipment technician Shane Pittman to dive into the groundbreaking research conducted by America’s first ghost hunter, Dr. Hans Holzer.

The show exhibits Cindy’s psychic abilities to explore paranormal activities at various locations. As the second run of the series premiered on October 29, 2020, her fans got curious to know more about the gifted medium’s personal life. Luckily for you, we have all the information, right here!

Cindy Kaza is an eloquent clairvoyant, but when it comes it her personal life, the artist is found unusually tight-lipped. She has not shared the precise details of her age, family, or background. At the tender age of 10, she woke up in the middle of the night, sensing her friend standing by her bedside. The haunting but life-altering part of it was that Cindy had recently lost her in a fatal car accident.

Brushing off the incident as a mere hallucination or a nightmare, she continued to live normally. But in her early twenties, Cindy experienced an “awakening,” and there was no going back for her. Seemingly, in her early thirties, Cindy began her training as a psychic medium in the United States and received certification from the Arthur Findlay School of Intuitive Sciences in Stansted, England.

The childhood paranormal event led Cindy Kaza to develop a sixth sense for the spirits around her. She decided to turn her special power into a profession and also to help others to realize theirs. Inherently believing in her ability to connect people to the souls of their loved ones who have passed away, she began to go on tours.

Her vocation includes being a clairvoyant (clear seeing), clairaudient (clear hearing), and clairsentient (clear feeling) seer. Her miraculous readings have entailed calling up past specimen incidents, even the names, personality traits, and most used catch-phrases of those now on the other side. Considered as the “real deal,” Cindy has received only positive reviews after her interactions with the audience so far.

Though the extraordinary psychic, Cindy Kaza, helps her audience open up about anything and everything, she chooses to keep mum about her personal life. According to her bio on Improv, a website for fans to stay updated with their favorite artist’s upcoming show, Cindy resides with her husband (?), Rich Redmond, in Nashville and Los Angeles. Redmond is a veteran musician, longtime drummer, and host of ‘The Rich Redmond’ show. He is also a touring drummer with the multi-platinum recording artist Jason Aldean. 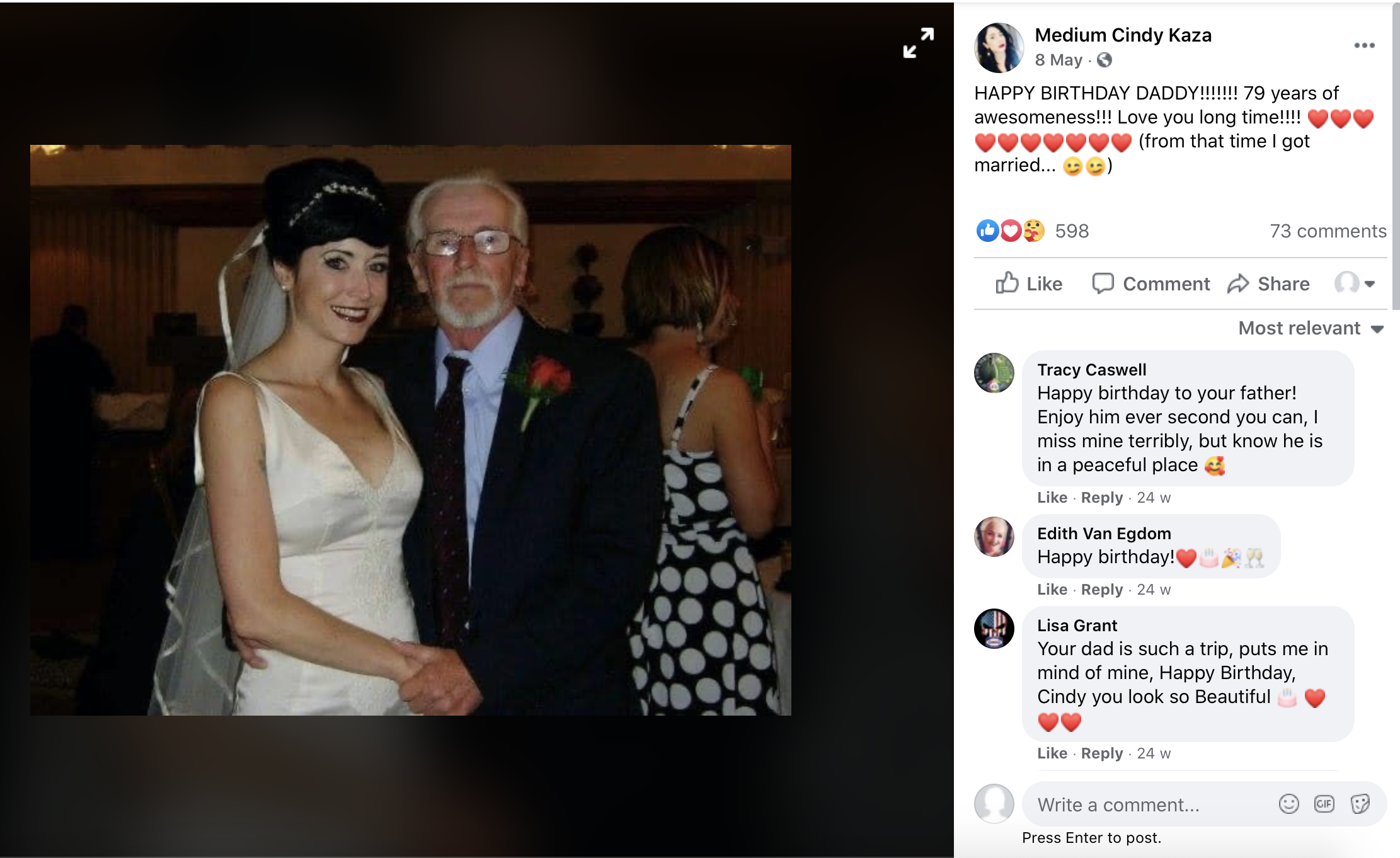 There is hardly any trace of information about the details of her marriage. As per the above post that she shared with her fans, it can assuredly be claimed that Cindy got married at some point in her life. But judging from her social media accounts, it seems like her relationship with Rich Redmond is a thing of the past. The usually coy medium shared a cozy picture with Danny Hammer, who runs a production company that provides audio and visual services to various media outlets. Though there is no official statement confirming the same, the heart and kiss emoticons on one of the posts say it all! 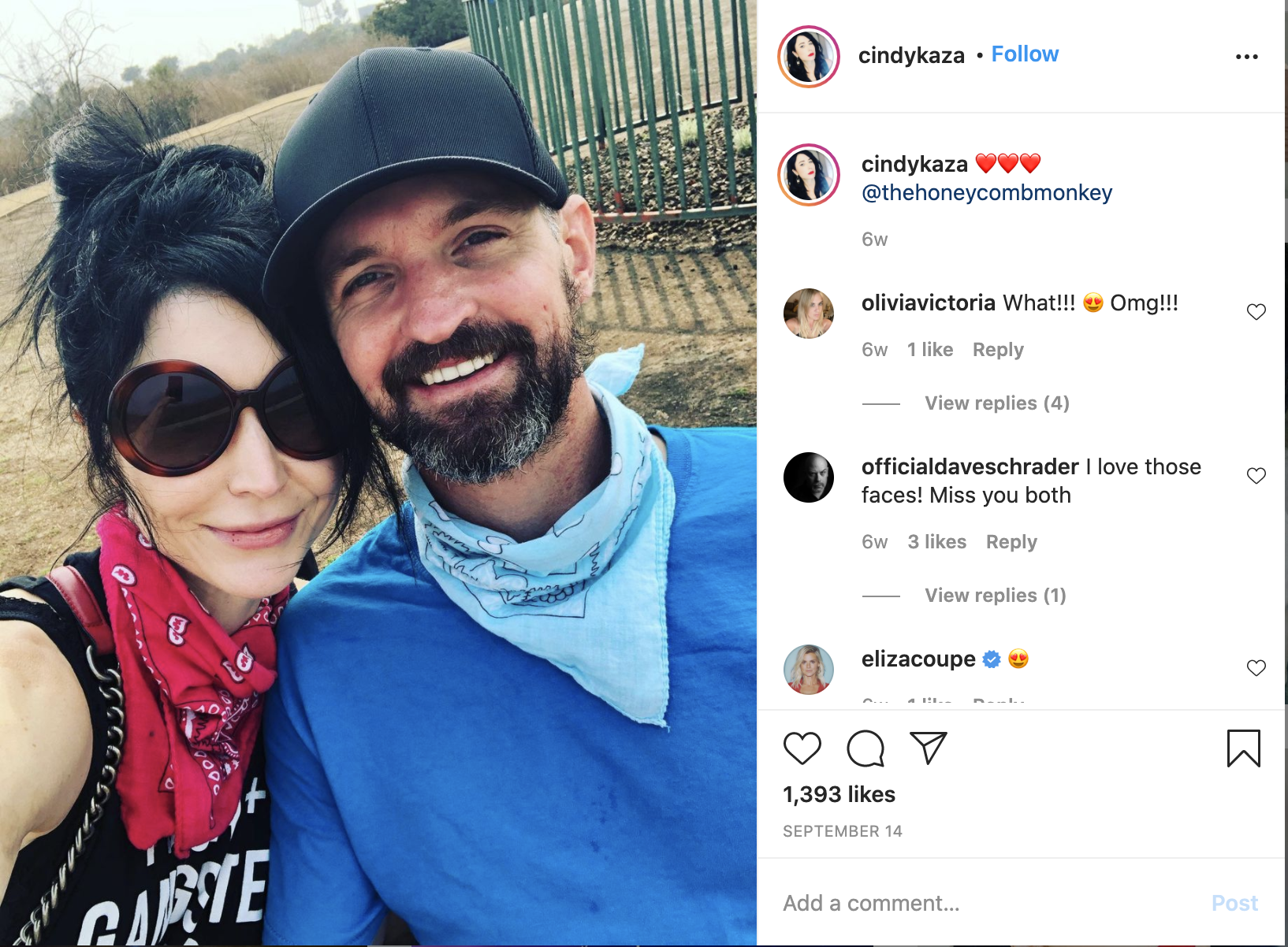