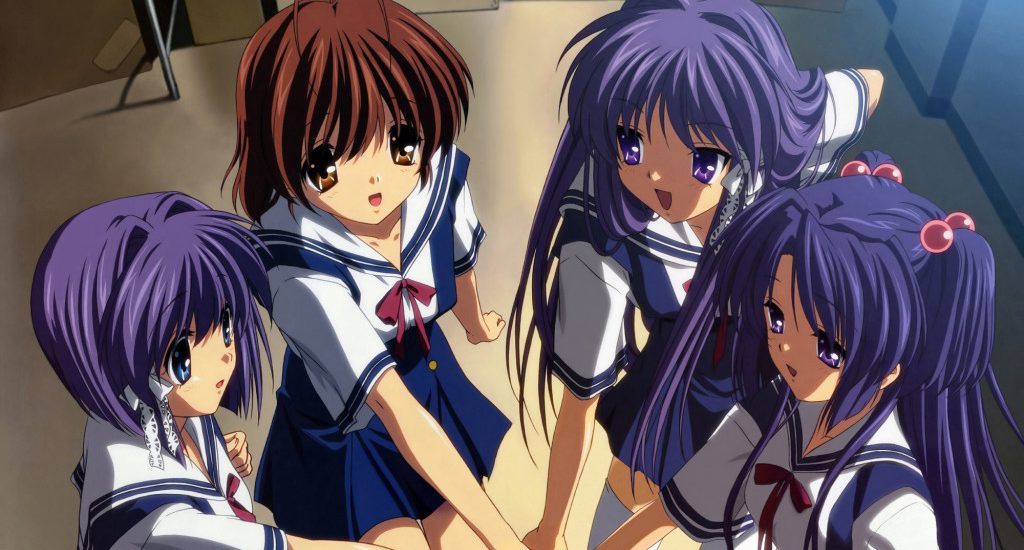 Ever watched an anime that was so cute and unrealistic in a good way? Well, ‘Clannad’ perfectly fits that description and is known for being extremely heart touching and influential. Almost everything about it is adorable and that’s probably the reason why it may not be for everyone. Now I personally don’t think that there’s anything wrong with the amount of sweetness that it offers, because many of us do love such “slice of life” anime shows. A lot of people say that they cried after watching it, which suggests how strong and impactful the series has been overall. And it’s not like it has a lot of tragic moments that forcefully make you bawl your eyes out; it’s about how it creates an experience for the viewer with its beautiful combination of romance and drama.

‘Clannad’ is the kind of anime that I would recommend to anyone regardless of your taste or previous experience with anime. We come across many anime shows these days, especially the ones of the romance genre, that depend a lot on their “attractiveness” and fan-service. These things are pretty normal for regular anime viewers but for someone new to it, these can often be big turn-offs. ‘Clannad’ has none of these and its purity towards its genre is what makes it stand out. It’s almost like reading a good self-help novel that helps you find your “purpose in life”.

‘Clannad’ is entirely character-driven and has arcs that are distributed based on their focus on each individual character. Some might just assume that by doing this, it just focuses on different characters at different times and just leaves the rest of it in “standby” mode. But that is not the case with ‘Clannad’ and though it does put a lot of emphasis on distributing the stories of each character along with the storyline, all of this together adds value to the overarching plot as well. Speaking of characters, just like real life, each of them goes through a subtle transformation all along and no one can really be confined to a particular personality type.

There isn’t much to say about the visuals because just knowing that Kyoto Animation was involved is more than enough. The studio has never failed to impress us with its unique animation styles and art. Even in this case, the artwork is joyful and relaxing and is complemented with the most beautiful piano solos in the background. ‘Clannad’ is simply for anyone who is willing to laugh, cry and slowly fall in love with the characters. All along the series, there is an ocean of lessons and hidden morals that one can learn and even implement in real life. It is very enjoyable, thought-provoking and anyone with the slightest interest in the “feel good” genre should definitely give it a shot.

Clannad Season 3 Release Date: When will it premiere?

‘Clannad’ season 1 released on October 5, 2007 and came to an end on March 28, 2008. This was followed by a second season titled ‘Clannad: After Story’ that started airing on October 3, 2008 and ended on March 27, 2009. Regarding the third season of the anime, there have been a lot of speculations online and fans are even signing petitions in the hope that the creators will hear them out and come up with a new season. Considering the anime’s popularity, it is very likely that there will be a new season. But as of now, there are no confirmations regarding this. We are keeping our fingers crossed and hoping that ‘Clannad’ season 3 release date falls sometime in 2020. Till then, you can always catch up with the visual novel or the other alternate versions of the show.

You can stream ‘Clannad’ on Hulu with its original Japanese audio and English subtitles.

‘Clannad’ centers around a teenage delinquent named Tomoya Okazaki, who hates his life and has no interest in his dull surroundings. He believes that his life will never have any true purpose, so he decides to bunk classes and spend the rest of his school days doing nothing. While walking around the school one day, he runs into a girl who mutters to herself slowly and then suddenly exclaims the name of a Japanese food called “Anpan”. This somehow catches Tomoya’s attention and he soon starts finding out more about her. Starting off with her name, Nagisa Furukawa, he soon discovers that she often exclaims the names of the things that motivate her, Anpan being one of them. Nagisa suddenly starts claiming that the two have now become friends but Tomoya just walks away, dismissing all her claims.

Soon after this event, Tomoya starts noticing her a lot more in school and feels an urge to become friends with her. He eventually gives in to the temptation and befriends the girl. She tells them that she has been held back in her grade for the whole year because she suffers from a serious illness. She also tells him that she dreams of reviving the school drama club that has been long forgotten. Tomoya has nothing better to do, so he joins Nagisa and four of her other friends who are trying to revive the drama club of their school. He starts getting closer to each one of them as they open up to him about their problems. His life begins to change as he embarks on an inspiring journey to solve each of their problems. 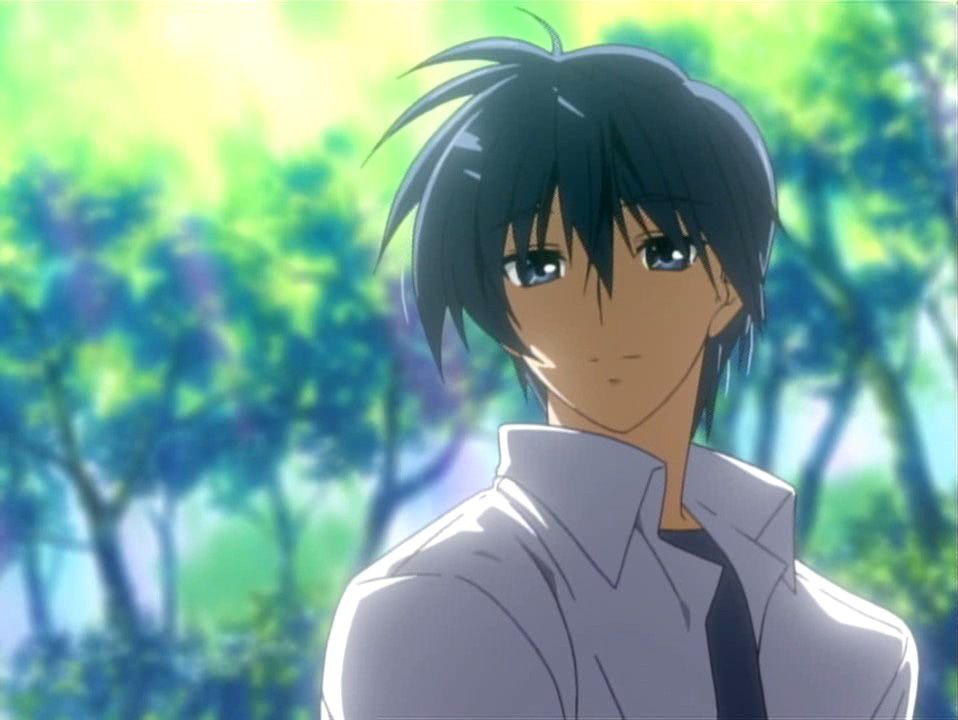 Tomoya is a 17-year-old student of the Hikarizaka Private High School, who despises being there because of his past experiences. At a very young and sensitive age, Tomoya’s mother had passed away in a car accident and now he lives with his alcoholic father. Even at home, he really hates his life because his father often sparks arguments with him for no reason. Appearance wise, he looks a lot like his father with his blue hair and dark blue eyes. Tomoya has always held a grudge against his father because when he was in middle school, he once had a heated argument with him and his father ended up slamming him to a wall. After this incident, Tomoya couldn’t move his right arm properly and had to quit middle school basketball. He doesn’t really care about anything around him anymore and often skips classes, arrives home late at night and doesn’t even bother studying for his exams. 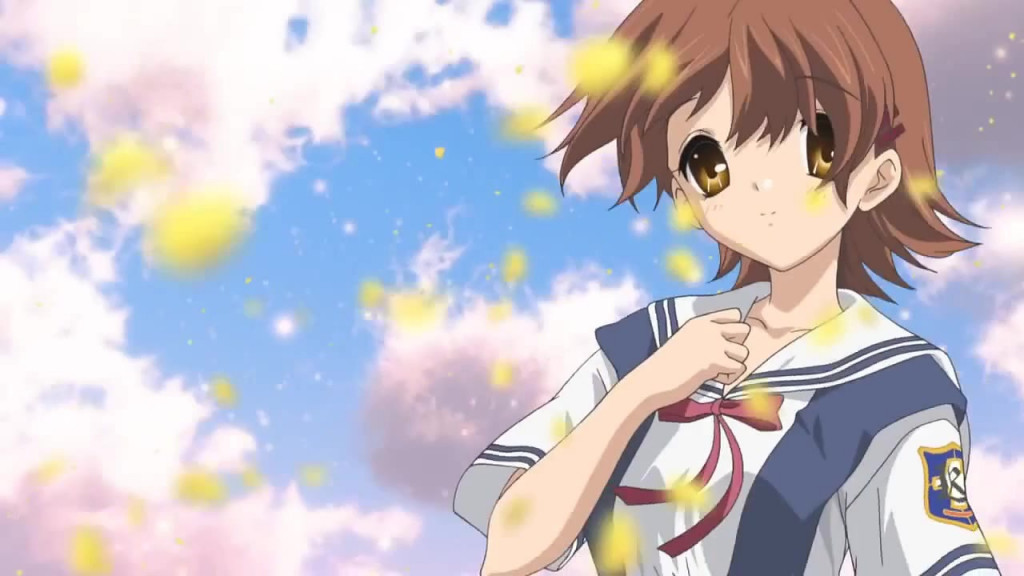 Nagisa is the female protagonist of the anime. She is a cute young girl with wavy auburn hair and golden brown eyes. She is very thin and frail compared to her peers because throughout her life, she has suffered from poor health and weak immunity. She is usually seen in her school uniform and often blushes when someone compliments her or calls her cute. She is a shy girl who is always kind to everyone around her. She often goes out of her way to help people even if she does not know them. She never fails to see the good in people around her and stays optimistic about her future.

Nagisa gets easily carried away by her emotions and sometimes, she blabbers out what’s on her mind even in the most inappropriate situations. She has a very strange habit of keeping herself motivated by announcing out loud the names of all the foods that she loves. She is an introvert but once someone strikes a conversation with her, she just doesn’t stop talking. Her chatty nature and childish behavior often draw the attention of those around her.