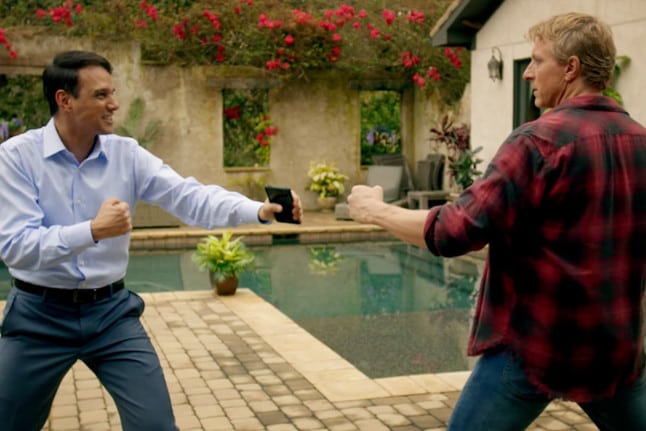 Do you remember the Karate Kid? I am sure that is not even a question to ask. It was a saga that inspired all of us to take a stand for ourselves and also learn some Karate. Though we were no-where close to being a daredevil to attempt the cool stunts shown in the movie, I am sure that every scene is etched onto our memories. Well, if you love Karate Kid, I am sure you will also love Cobra Kai, which is an American web television series based on the 1984 film.

Season 1 of Cobra Kai premiered on YouTube Red (now YouTube Premium) on May 2, 2018 and received wide acclaim from everyone including the critics. The show is currently rated 100% on review aggregator website Rotten Tomatoes, which surmises it as “Cobra Kai continues the Karate Kid franchise with a blend of pleasantly corny nostalgia and teen angst, elevated by a cast of well-written characters”. IGN had this write about the first season of the show: “Johnny’s journey is one that I want to follow because even though the principles that Cobra Kai teaches are troublesome, with their “strike first, strike hard, no mercy” mantra… Johnny is trying to do the right thing. Even if he’s a little misguided.”

Cobra Kai Cast: Who’s in it?

Let us first discuss who has already been seen in Cobra Kai Season 1. Some popular faces are Ralph Macchio as Daniel LaRusso, William Zabka as Johnny Lawrence and Mary Mouser as Smantha LaRusso. In the second season, Martin Kove, who played the role of John Kreese in The Karate Kid films, returns to the TV screens. Other than him, Xolo Mariduena as Miguel Diaz, Tanner Buchanan as Robby Keane, Courtney Henggeler as Amanda LaRusso and Mary Mouser as Samantha LaRusso are also seen in Cobra Kai Season 2. We are hoping that most of the the aforementioned cast members will return in the next season.

Cobra Kai Plot: What is it about?

The show begins 34 years after the famous fight in the original movie and follows a down-and-out Johnny Lawrence, who seeks redemption by reopening the infamous Cobra Kai karate dojo. In doing so, he reignites his rivalry with a now successful Daniel LaRusso, who has been struggling to maintain balance in his life without the guidance of his now-deceased mentor, Mr. Miyagi. The show is about two men addressing past demons and present frustrations the only way they know how: through karate.

Running parallel to the conflict are the story arcs of Johnny’s and Daniel’s students. Johnny has reopened karate dojo to train younger students, but the over-aggressive philosophy of Johnny has an effect on his students who, just like their teacher, prove to be too reckless with their knowledge of karate. On the other hand, Johnny’s estranged son, Robby Keene, comes under the wing of Daniel, who hires the boy at his car dealership, initially not knowing that Johnny is his father. Daniel manages to teach him the important lessons that his teacher Mr. Miyagi had taught him- those of balance, and the belief that karate should only be used to protect oneself and not as a means to harm others.

The ending of Season 1 sees Johnny’s dojo, namely, Cobra Kai, win the All-Valley Championships in a controversial manner. This convinces Daniel that the right thing to do now would be to open a dojo of his own, which he decides to name Miyagi-Do as a tribute to his teacher.

What’s notable about this series is that people who have not even seen the original movie will not be lost on what is actually going on between the two sworn enemies. Their philosophy towards karate and life in general are so opposing that they become enemies once again.

The show’s inherent message of good vs bad or right vs wrong is easily relatable that just like the original movie it immediately leaves a lasting impact on you. This is a series which also has the potential to become a cult classic just like the original movie. It has characters deep-rooted in their own philosophies, two sworn rivals who have not seen eye to eye for over three decades now. Not to mention the comedic tone of the show only adds to the fun.

Both Johnny and Daniel have had problems in their personal lives, and karate is something which has pulled them through those troubled times and helped them survive in life. It is just like what music is to a musician. It is their art, their principles, and it is through their art that these two iconic characters can fully express themselves.

Hopefully, the next season, if it happens, will continue exploring the rivalries of these two characters.

Cobra Kai Season 3 Release Date: When will it premiere?

Cobra Kai Season 2 premiered on Wednesday, April 24, 2019. As far as the next season goes, we have good news for the fans. On May 2, 2019, YouTube renewed the show for another season. Though no premiere date was announced, our best guess that Cobra kai season 3 release date could be sometime in April or May 2020. We will update this section as soon as we hear more.

While we wait for an update on Cobra Kai season 3, check out the season 2 trailer to refresh your memories. If you haven’t seen the show yet head over to YouTube to catch all the episodes of the previous seasons.