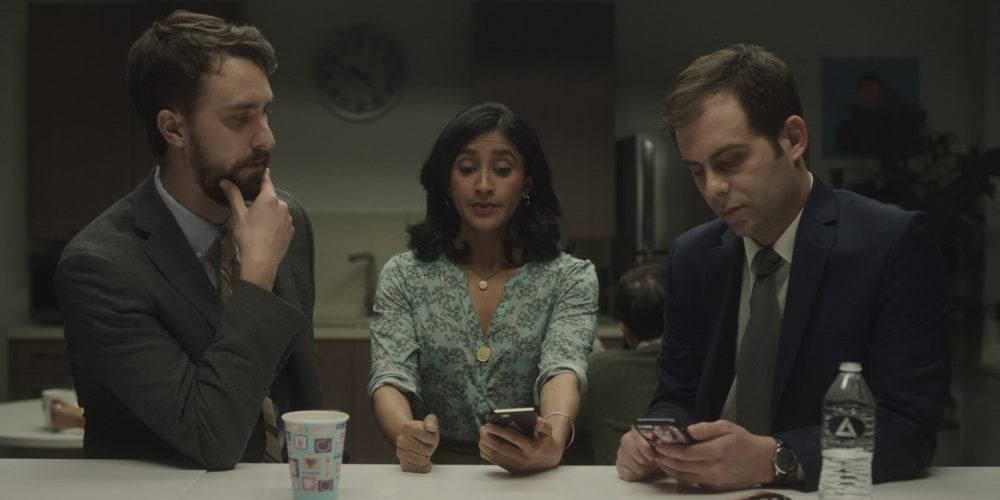 ‘Corporate’ is an American comedy television series that airs on Comedy Central. Created by Pat Bishop, Matt Ingebretson, and Jake Weisman, the show is set in a stereotypical, soulless, multinational corporation, and it follows the miserable lives of two downtrodden employees.

Season 1 of ‘Corporate’, comprising 10 episodes, premiered on January 17, 2018, and aired up until March 18, 2018. Season 1 was greeted with an outstanding response from critics and viewers alike, prompting Comedy Central to renew the show for its second and third seasons. Fans of the show are now wondering whether ‘Corporate’ will return again with the 4th season. Here’s everything we know about it.

‘Corporate’ season 3 premiered on July 22, 2020, on Comedy Central. It ended with its 6th episode on August 26, 2020. However, season 3 happens to be the last installment from the series. Despite its sheer brilliance, ‘Corporate’, unfortunately, did not do well in terms of TV ratings and viewership. In fact, Comedy Central has earlier canceled several shows which had ratings and viewership similar to ‘Corporate’. Therefore, as of now, ‘Corporate’ season 4 stands cancelled.

Corporate Cast: Who is in it?

In the show, co-creators Matt Ingebretson and Jake Weisman star as Matt Engelbertson and Jake Levinson respectively, who are two junior executives in-training at a company called Hampton DeVille.

Meanwhile, Lance Reddick plays the role of Christian DeVille, the CEO of the company, and Matt and Jake’s boss. DeVille’s two lieutenants, the sycophantic Kate Glass and John Strickland, are played by Anne Dudek and Adam Lustick respectively. Additionally, HR representative Grace is played by Aparna Nancherla, and this rounds up the main cast members of the show.

Corporate Plot: What is it About?

The basic premise of ‘Corporate’ is rather simple, and it follows Matt and Jake as they look to become full-blown executives deemed worthy of attending board meetings. However, the journey towards becoming a company executive is far from easy, and the protagonist duo is constantly pestered by tyrannical CEO Christian DeVille, and his two lieutenants.

In its approach, ‘Corporate’ differs from other workplace satires like ‘The Office’ and ‘Office Space’, both of which offer hilarious insights into corporate life from the viewpoint of lackeys and peons. ‘Corporate’, however, shakes things up by bringing in the perspectives of two would-be executives and it captures the compromises, the sacrifices, and the work pressure required to be deemed an executive in a multinational corporation. Each episode of the show generally deals with one aspect of life in multinational corporations, ranging from making PowerPoint presentations to trying to market new addictions to CEO DeVille planning a complete media take-over. The variety does not disappoint.

However, it is not in its plot, but rather in its tone that ‘Corporate’ really shines. The show abandons the usual Comedy Central tactic of showing light-hearted comedies and instead, goes full nihilist. Matt and Jake, who are portrayed to have quite a degree of self-loathing, are thrust into the corporate world of Hampton DeVille, where drone-like employees go about their banal daily tasks, and where executives thrive in their self-importance, superficial positivity, and fake artistic hobbies. Yet, it is not just the multinational corporation work culture that ‘Corporate’ targets with its bleak and outrageously funny humor – its cynicism spreads beyond, covering capitalism, corrupt politicians, righteous activists, the age of social media, and even cute dogs (who Jake refers to as “overbred mutants too stupid to beg for death” in one episode).